Euan Blair’s rise to become one of wealthiest start-up entrepreneurs in UK has been meteoric – but is his firm Multiverse REALLY worth £1.4bn? 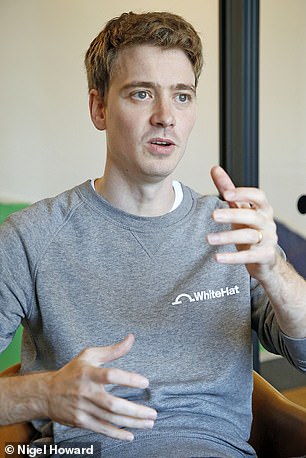 Rising star: Euan Blair’s start-up Multiverse has yet to make a profit

Euan Blair’s rise to become one of the wealthiest start-up entrepreneurs in the UK has been meteoric.

But just why is Multiverse, the company founded a mere six years ago by the eldest son of former Labour Prime Minister Tony Blair, valued so highly?

A fundraising last week put the ‘ed-tech’, or educational technology firm, at £1.4billion.

The 38-year-old’s personal fortune, mostly comprised of his stake in the business, stands at about £420million on paper.

But are these astounding sums grounded in reality – or is there, as with many tech businesses, a whiff of hype? Multiverse describes itself as a ‘mission-driven tech start-up’, providing apprenticeships at leading employers from Google to BP.

Blair junior last month bought a £22million five-storey townhouse in Kensington, West London, where he lives with wife Suzanne and their child. His family links, coupled with the breathtaking valuation placed on his firm, have made him the darling of London’s tech scene.

However, an analysis of Multiverse’s most recent accounts, for the 12 months to the end of March 2021, show surprisingly modest revenues of £10.1million, up from just under £5million the previous year, and net assets of £25.6million.

The business, which has 600 staff, says it now serves more than 5,000 apprentices on two continents. It has yet to make a profit and racked up a £10.9million loss last year, after £5million of red ink for 2020.

In the tech sphere, it is not unusual to see hefty valuations on lossmaking firms. But based on these numbers, Multiverse is on a valuation of around 140 times its current sales, which is a heady multiple even for the tech world. Analysts say the valuation is based on the firm establishing itself in the US, which is not guaranteed.

Multiverse makes its money by charging blue chip clients a fee once an apprentice is successfully placed. The client then pays Multiverse to train up the apprentice.

Bankers are courting Blair junior in the hope of lucrative fees if he sells or floats the business. One broker said: ‘They’ll be lining up at his door now.’