The euro tumbled closer to parity with the dollar as fears of recession and the prospect of more aggressive interest rate rises in the United States boosted the greenback.

Sterling and the euro have been hit by the darkening economic outlook as inflation soars. 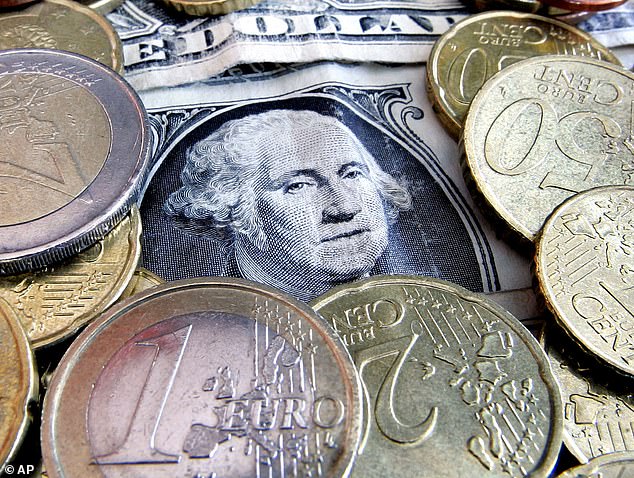 An intensifying energy crisis in Europe – where the biggest single pipeline carrying Russian gas to Germany began a ten-day shutdown for maintenance – has also taken its toll.

It is feared the shutdown of Nord Stream 1 may last even longer due to the war in Ukraine, hammering German households and businesses and throwing plans to fill storage for winter into disarray.

At the same time, the dollar has been pushed higher by expectations that the Federal Reserve will embark on further super-sized interest rate hikes as it steps up its battle against inflation.

Official figures tomorrow could show inflation in the US rising further above its current 41-year high of 8.6 per cent – forcing the Fed to act.

With the dollar already at a 20-year high against a basket of global currencies, analysts warned the outlook for the euro was bleak.

‘With little economic relief on the horizon for Europe, and US inflation data likely to mark a new high for the year and keep the Fed hiking aggressively, we think the risks remain skewed in favour of the greenback,’ said Jonas Goltermann at Capital Economics.

Share
Facebook
Twitter
Pinterest
WhatsApp
Previous articleChristine McGuinness looks cheery as she catches up with Kerry Katona in Cheshire
Next articleWould you feel safe being treated on a 'virtual ward' in your home?
RELATED ARTICLES
Business