Eva Longoria, 46, sizzles in a red swimsuit atop a Ford, references Madonna

The Desperate Housewives looked youthful and lean in her little red swimsuit when sitting atop a vintage cherry colored Ford truck.

The 46-year-old mother-of-one was posing for the March 2022 edition of Women’s Health. 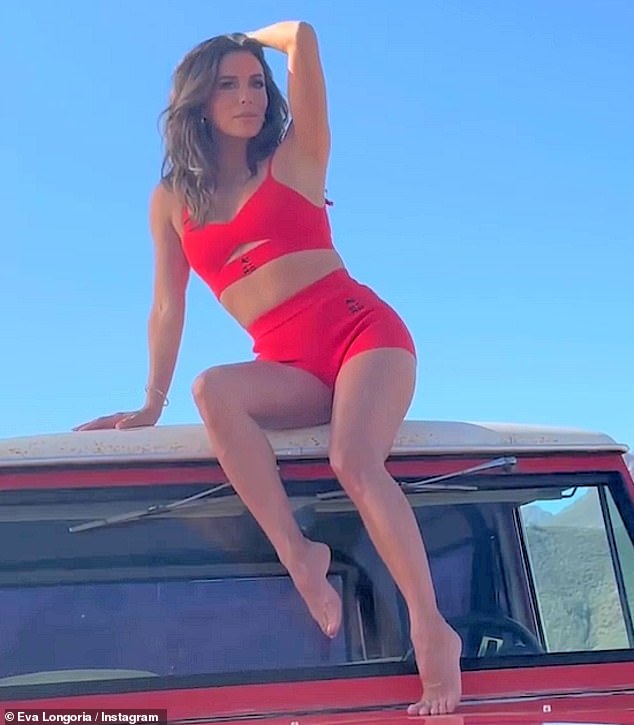 On top of the world: Hollywood siren Eva Longoria shared a behind-the-scenes video on Instagram Wednesday from a recent photo shoot she did. The Desperate Housewives looked youthful and lean in her little red swimsuit

Also in the clip she was seen trying to hold her pose to make her svelte figure look as flattering as possible.

That is why in her caption she shared, ‘Strike a pose, there’s nothing to it,’ which is a line from the Madonna song Vogue.

In her interview she said she is the real deal and never fake.

The actress admitted: ‘Sometimes people are scared to be themselves, but I am who I am,’ as she spoke about being confident enough to show her true self to the world.

And she was seen in other suits as well.

For one gorgeous photograph, Eva posed in a white ribbed bandeau bikini top and coordinating bottoms as she gazed over her shoulder at the camera. 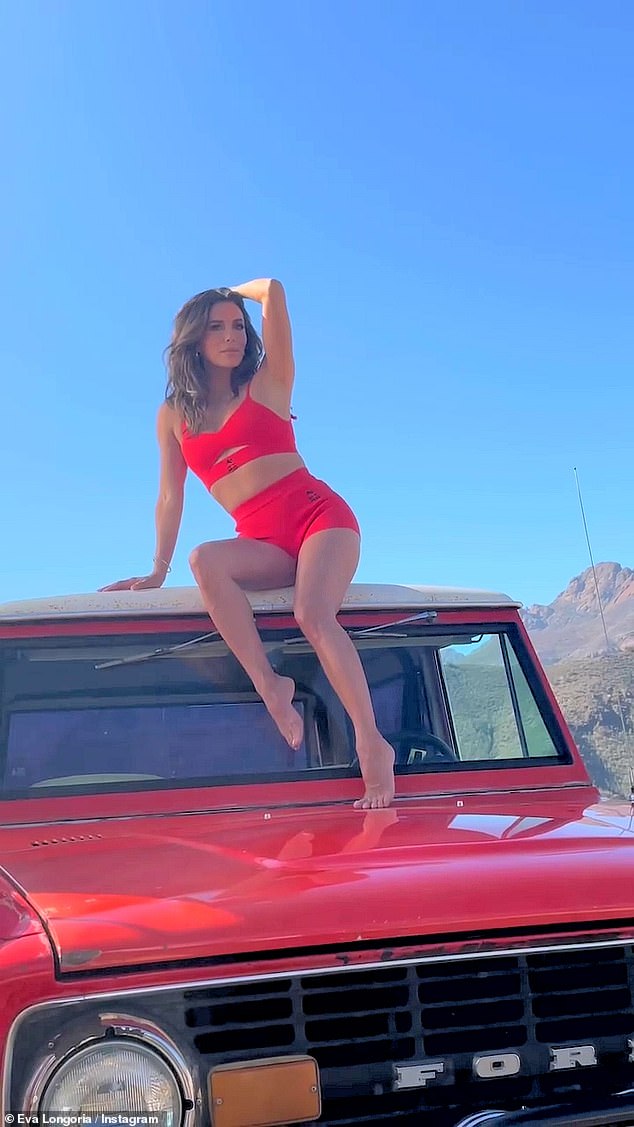 The world is her oyster: The star was seen on a cherry red Ford Bronco in the desert where there was nothing but blue sky

Another stunning shot showed the star in a low cut striped sparkling thong swimsuit, with her leg hitched up to offer up a glimpse of her toned behind.

Speaking to the publication about being radically honest, Eva explained: ‘I don’t really have an attitude like, “Let me put this facade up for social media but be another way in life.”

‘Sometimes people are scared to be themselves, but I am who I am,’ added Eva, who is a doting mum to three-year-old son Santiago with husband José Bastón.

Addressing her her nonnegotiable, go-to coping mechanism: one hour of working out, every day, Eva admitted: ‘I really work out for my mental health. 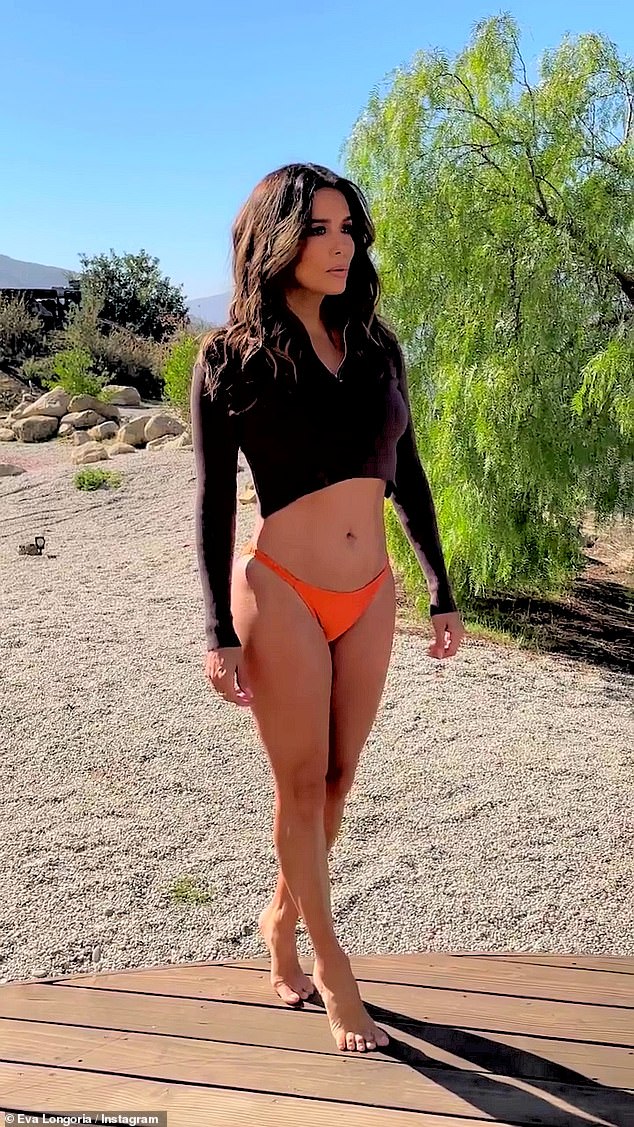 On her tippy toes: The TV and film star had to balance herself while in these orange briefs 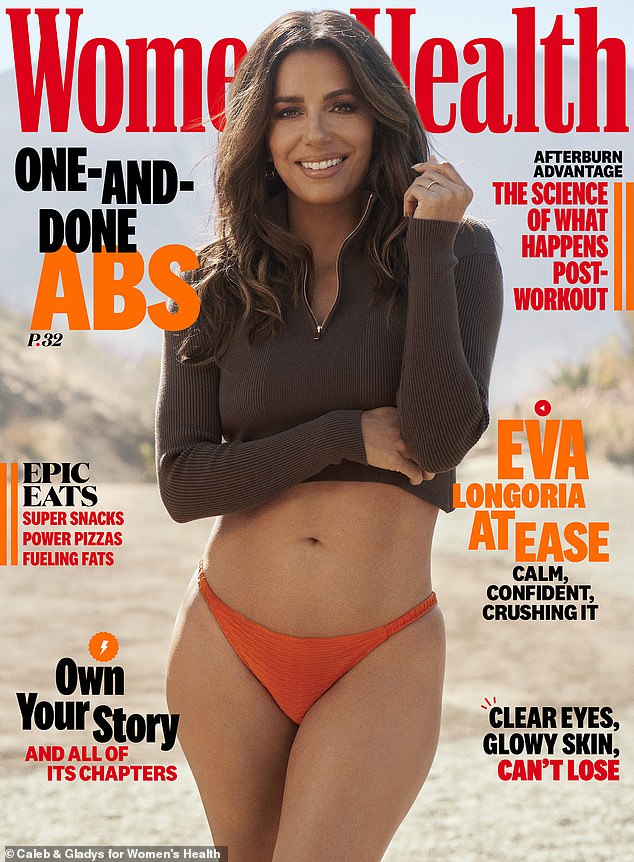 ‘I do very heavy weights. I feel like my body changes the most when I do that—I wear a heart rate monitor, and I can see my heart rate spike from just doing a heavy bicep curl.’

The actress also explained why she loves rebounding – the technical term for trampoline workouts – which she got into in 2020, stuck at home and looking to shake up her exercise routine.

Eva revealed: ‘It makes me present. You really have to focus on the routine and memorize the movements. They switch sides a lot, which can throw you off, so you have to be on top of it. I love that.’

The mother-of-one also opened up about cooking, which she calls ‘therapeutic,’ and dabbling with more plant-based ingredients. 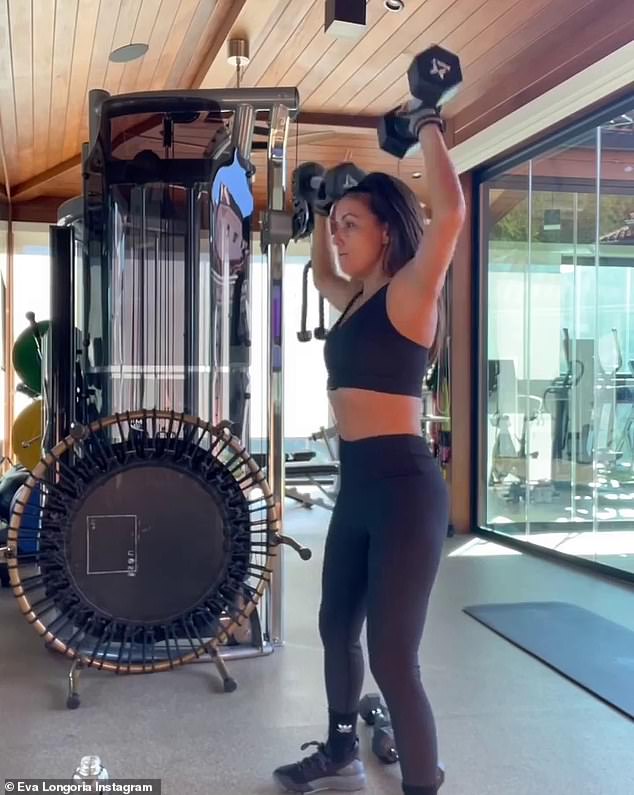 Daily workouts: Addressing her her nonnegotiable, go-to coping mechanism: one hour of working out, every day, Eva admitted: ‘I really work out for my mental health’

She explained: ‘I grew up on a ranch where we ate what was on the land—when it was squash season, we ate squash for three months.

‘It gave me such an appreciation for where food comes from: It comes from the ground.

‘Beans are a big source of protein for us. I love making portobello tacos and jackfruit tacos, and cauliflower fried rice.’

Discussing her career, Eva spoke about flexing her skills behind the camera for Flamin’ Hot, her first feature film as a director.

She gushed: ‘It’s a project that is so close to my heart, a true labor of love. What’s incredible is that the studio allowed me to hire who I needed to hire behind the camera. It was Latino or Latina, all the way down the line.’

Boy George signs for I'm a Celebrity… Get Me Out of Here! and secures the biggest paycheque EVER