Ewan McGregor and Mary Elizabeth Winstead looked as loved-up as ever as they stepped out in Downtown LA on Tuesday in their first outing since tying the knot in a low-key outdoor ceremony.

The Moulin Rouge! star, 51, and the actress, 37, packed on the PDA as they shared a cuddle and a kiss while out for lunch at Bike Shed Motor Co restaurant with their friends.

Ewan’s silver wedding band could be seen on full display cut a casual figure in white jeans and a simple grey T-shirt, which he paired with a knitted cardigan and brown boots. 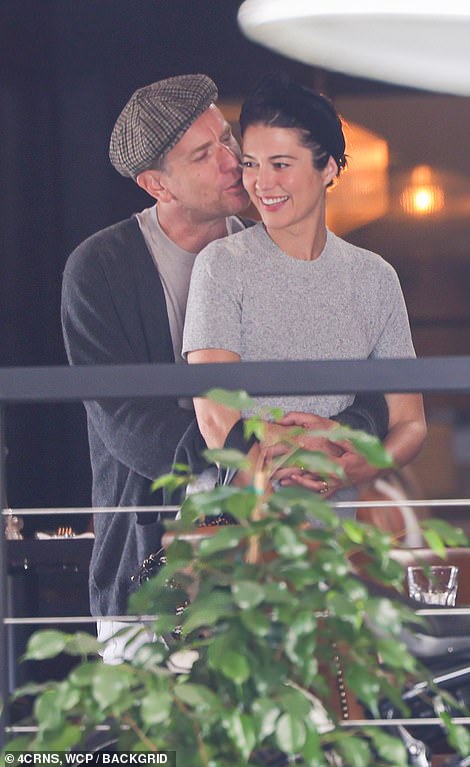 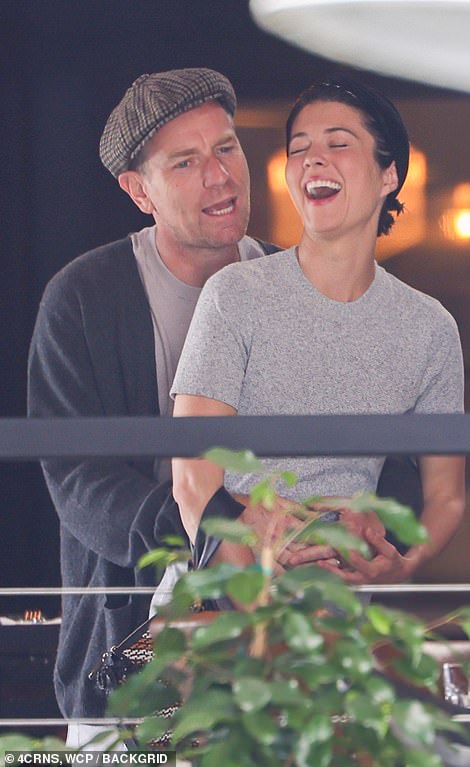 Smitten: Ewan McGregor and Mary Elizabeth Winstead looked as loved-up as ever as they stepped out in Downtown LA on Tuesday after tying the knot in a low-key outdoor ceremony 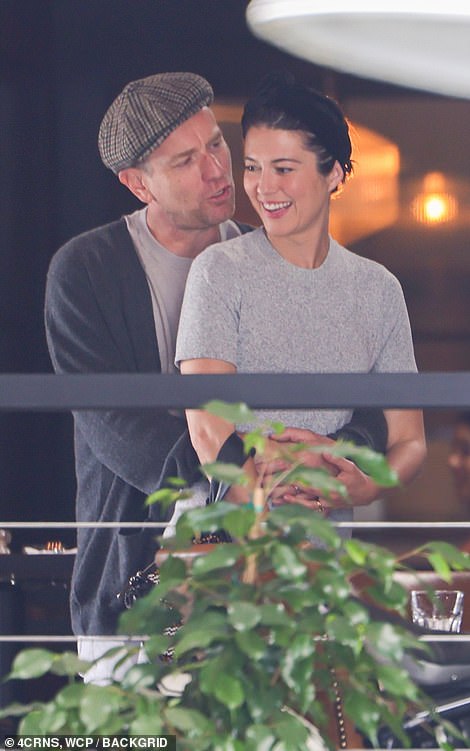 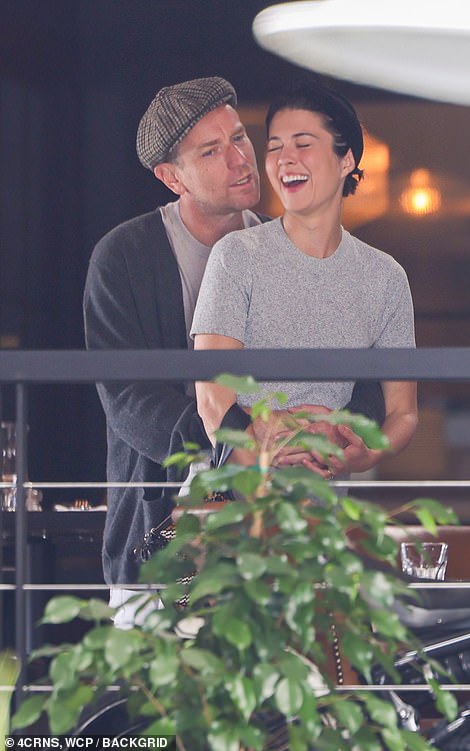 Couple: Ewan cut a casual figure in white jeans and a simple grey T-shirt, which he paired with a knitted cardigan and brown boots 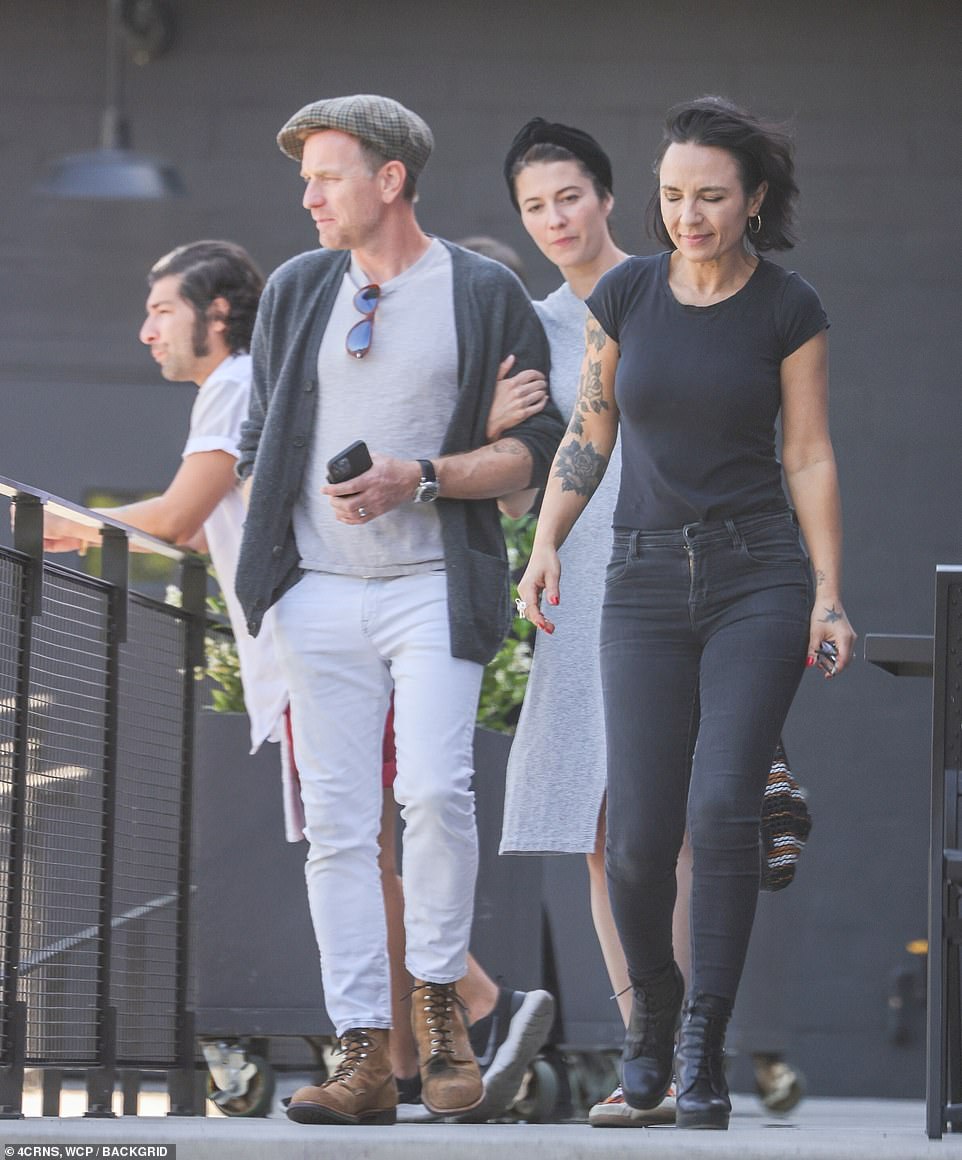 Just married: The Moulin Rouge! star, 51, and the actress, 37, walked arm-in-arm while out for lunch at Bike Shed Motor Co restaurant with their friends

He tucked his grey locks underneath a checkered flat cap, while he wore a pair of brown sunglasses tucked into his T-shirt as he walked arm-in-arm with his partner.

Mary looked effortlessly chic in a grey T-shirt dress and gave a flash of her toned pegs through the cut-out, while she kept comfortable in a pair of bright trainers.

She styled her brunette tresses swept back behind a black hairband and showed off her fresh-faced beauty as she enjoyed the lunch out with Ewan and their friends, including presenter Charley Boorman.

The couple appeared to be in excellent spirits after reports of their nuptials as they were seen sharing a kiss and laughing, while they walked arm-in-arm outside the venue.

The outing comes after sources told People that Ewan and Mary exchanged vows over the weekend in front of ‘close friends and family,’ after first meeting on the FX series Fargo in 2016.

An insider told the publication: ‘It was a small wedding for family and close friends. They had an outdoor ceremony. It was lovely and joyful.’

‘The menu was farm-to-table. They are an adorable couple. They are pretty low-key and like their canyon life. They often hike and go to the beach,’ the source added.

Representatives for Ewan and Mary have been contacted for comment by MailOnline.

It was previously reported that Ewan and Mary Elizabeth were set to wed in Los Angeles last week. 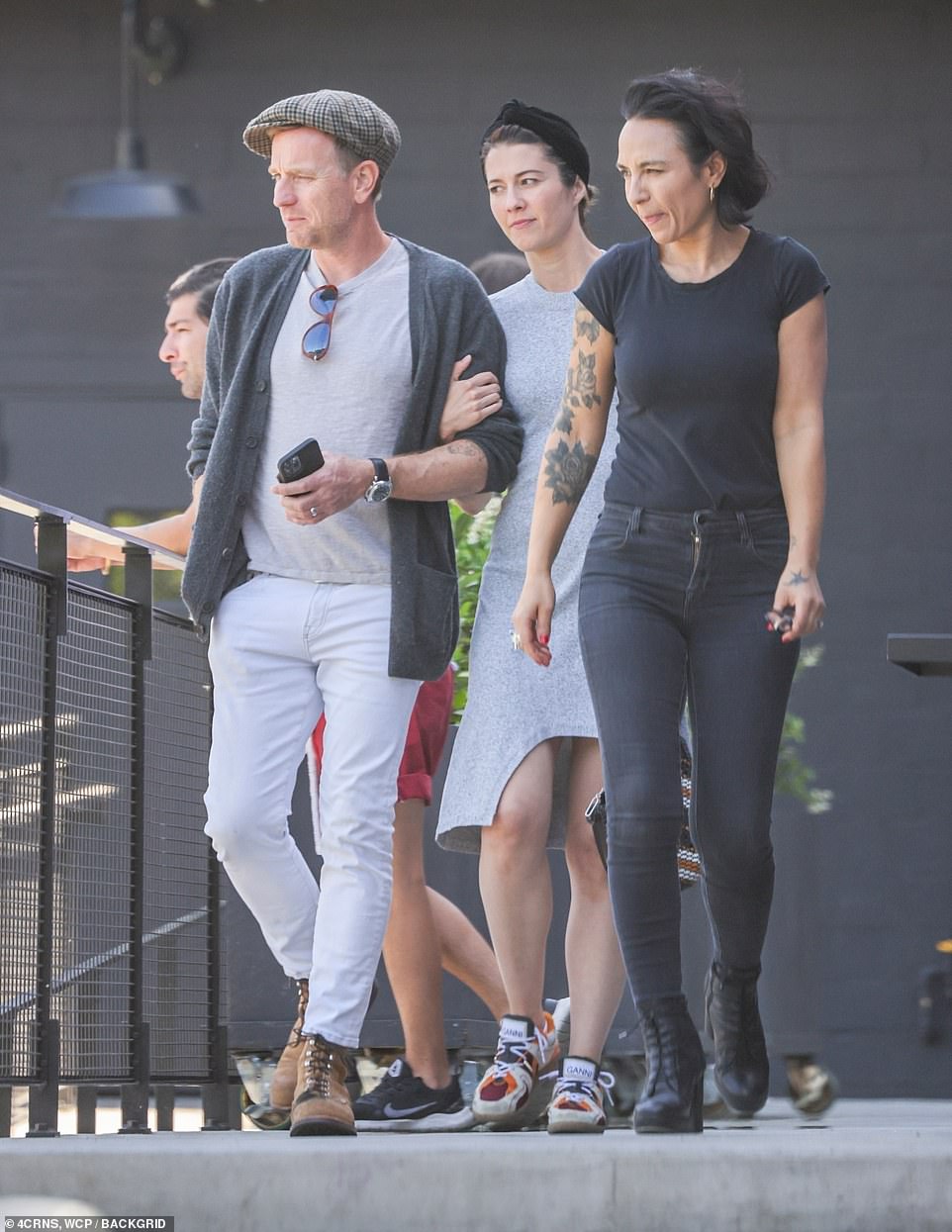 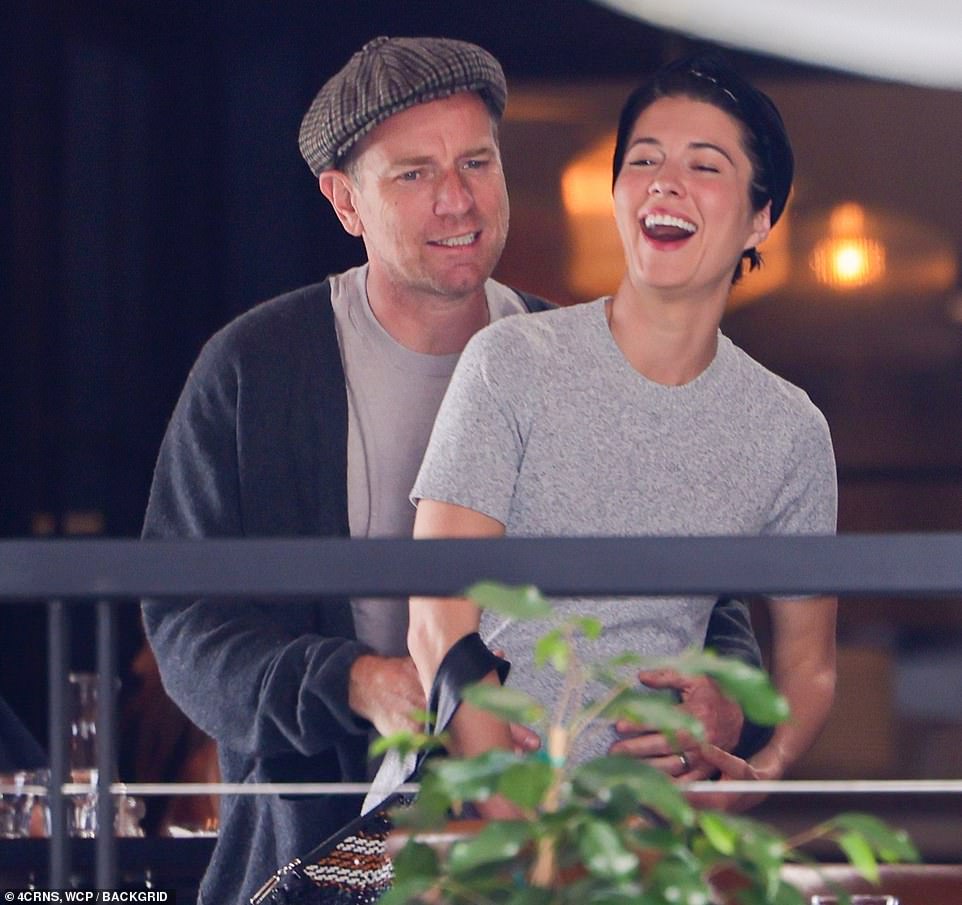 Sweet: The couple appeared to be in excellent spirits after reports of their nuptials as they were seen sharing a kiss and laughing

A source told Page Six, ‘They are more in love than ever — and having their first child together last year just strengthened their bond.’

Ahead of their big day, the pair’s eco-canyon hideaway was spotted being prepared for their big day, with the couple covering their pool with chairs for 60 guests, indicating an intimate affair.

Trucks and other vehicles could be seen in the drive while workmen are pictured carrying tables to the property.

A number of other tables were seen dotted around, while strings of fairy lights are hung up and outdoor heaters set up, suggesting the couple opted for an outdoor reception with celebrations heading into the night.

The couple, who met on the set of the TV crime drama Kavanagh QC, first confirmed their split in 2017 amid claims Ewan had been seen kissing Mary in a London restaurant.

In 2020 Mary discussed her romance with Ewan after her own first marriage ended, telling Glamour UK: ‘I got divorced a couple of years ago, which was a scary, crazy thing for me because I had been with the same person since I was 18 years old, and that was what I knew.

‘I was really starting new as an adult for the first time in my life. For me that was a big turning point, being okay with changing, accepting that change is a good thing and that it’s okay not to know where that change is going to take you.’

Eve was pictured without her wedding ring at around the same time.

The Star Wars actor – who blamed ‘irreconcilable differences’ for the split – then began dating Mary. The couple welcomed Laurie into the world in June.

In September Ewan also paid tribute to Mary during his acceptance speech at the Emmy Awards, saying: ‘Mary, I love you so much. I’m gonna take this home and show it to our new little boy, Laurie.

‘And to my beautiful girls, who I know are watching, Clara, Esther, Jamyan and Anouk, hello to you too. Thank you very much everybody.’

The couple, who never revealed they were expecting, had their baby news announced by Ewan’s daughter Clara on Instagram.

Clara, whose mother is Eve, shared a heartwarming snap of herself cradling her brother in her arms as she congratulated her father and Mary Elizabeth.

She wrote: ‘Welcome to the world little brother ❤️ congratulations to my Dad & Mary – this is the greatest gift’.

Esther also shared pictures cradling the newborn as she gushed: ‘Met my little brother looking like a pirate. I recommend! Welcome to the family little Laurie’.

Despite Clara’s well-wishes for the couple, she previously slammed Mary amid her blossoming relationship with Ewan following his spit from Eve.

She described the actress as ‘a piece of trash’ on Instagram in 2018, which accompanied a photograph of her father and Mary kissing at the Vanity Fair Oscars party.

In the post’s caption, the fan had referred to Mary as ‘the most beautiful and talented woman on earth’ – something Clara was more than ready to refute.

‘Most beautiful and talented woman on earth??? Oh man y’all are delusional. The girl is a piece of trash :),’ wrote Clara in the post’s comment section.

Soon after her reply, another Winstead fan urged her to ‘say it to [Mary Elizabeth’s] face not [on] social media.’

They added: ‘It took TWO to undo this marriage. If a man OR woman is happy w/ their marriage no outside interference can destroy that!’

To the fan’s surprise, Clara firmly agrees with their assessment. ‘Yup it took two!! Mary & my father :),’ she wrote.

In an interview with The Times in August that year, Clara openly acknowledged the immaturity of her Instagram banter, but claimed that her rage was justified. 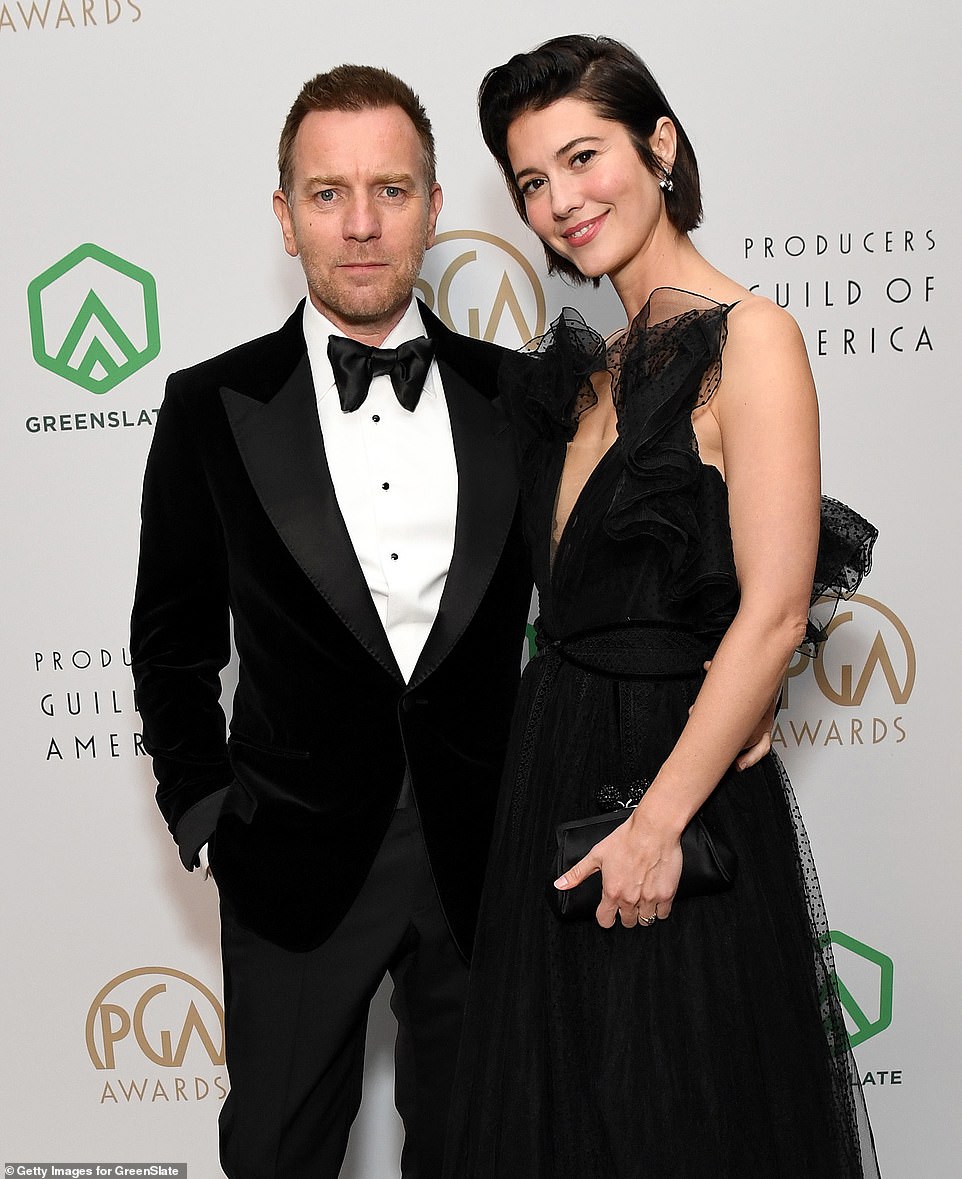 ‘It wasn’t the most mature way to go about things, but I was angry and upset.’

According to Clara, there were things going on behind-the-scenes that became ‘a lot to deal with’ and eventually sent her over the edge.

‘There had been a lot building up to it and a lot to deal with – not to make excuses or anything – but, yeah, it wasn’t my finest moment,’ she admitted.

She also explained that she kept ‘being tagged in the photograph’ and was ‘seeing negative things about [her] mom.’

‘I said how I felt and I didn’t want to apologise for it. It wasn’t the right way to go about things, but it’s a hard thing to wrap your head around when you feel you had this idea of what the family unit is and then to have that shift. It’s very weird.’ 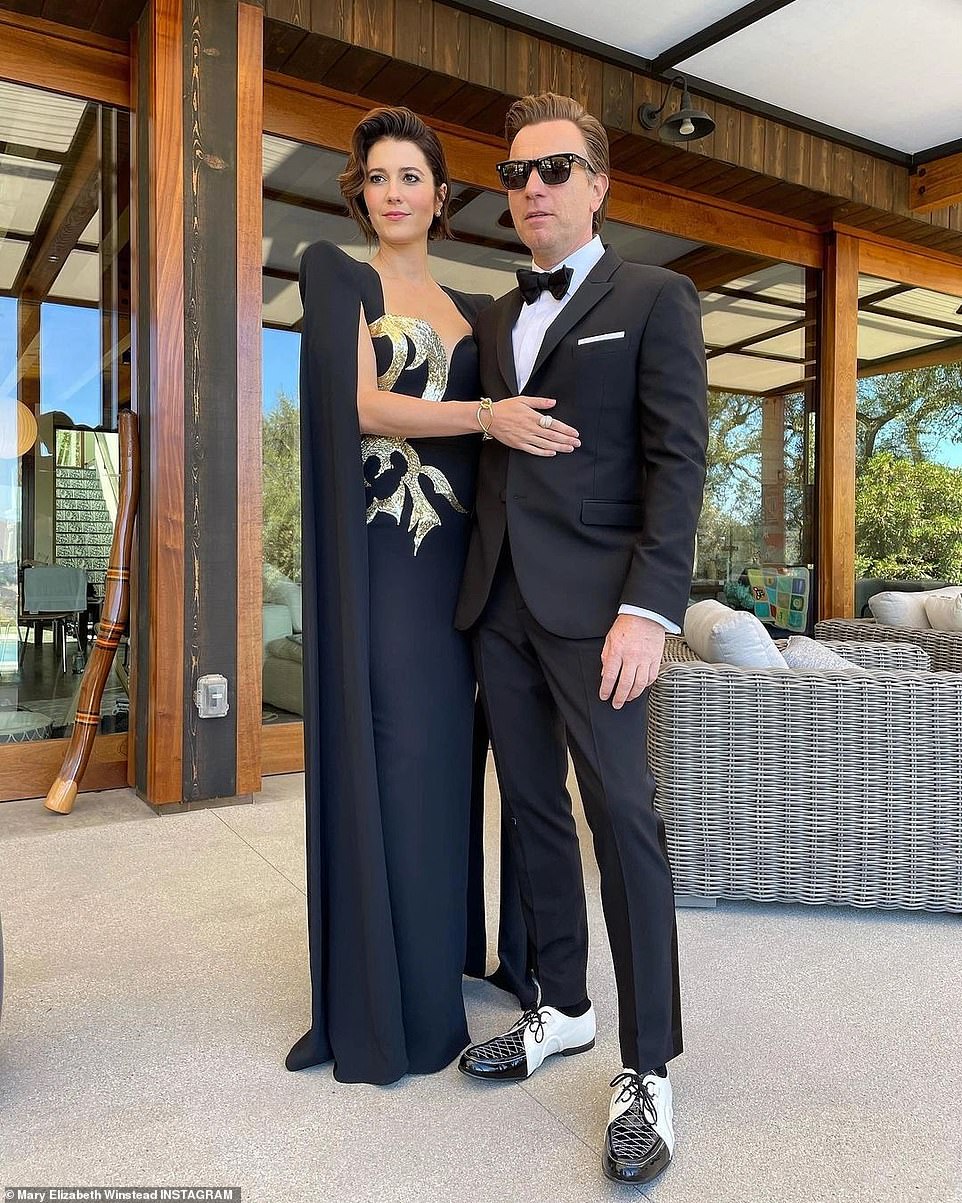 Loved up: Sources told People the pair exchanged vows over the weekend in front of ‘close friends and family,’ after first meeting on the FX series Fargo in 2016