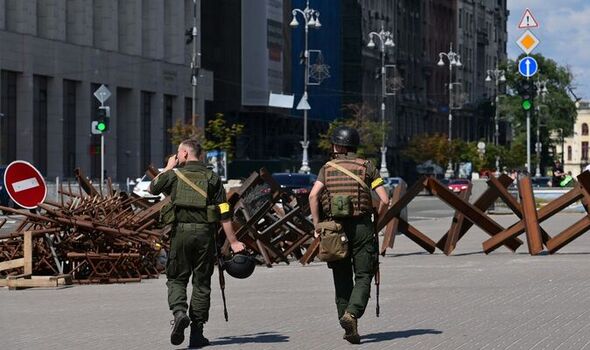 Ukrainian soldiers walk past a barricade in central Kyiv, on June 30, 2022 (Image: Getty)

The Daily Express was invited to watch the final Ukrainian troops completing their training on Multiple-Launch Rocket Systems and L119 light guns on Salisbury Plain. We witnessed the troops firing shell after shell into the Wiltshire countryside, training on new weapons to fight Vladimir Putin’s forces.

This newspaper understands Kyiv will receive 3 MLRS systems, which can hit targets 52 miles away and around 50 L119 guns.

The Ukrainian soldiers thanked British troops for their training, adding “it is really important for us to understand that the world hasn’t forgotten about us”.

Soldiers from the Royal Artillery Regiment have trained dozens of Ukrainians on the Multiple-Launch Rocket Systems (MLRS) in a three-week crash course.

Training for British soldiers typically takes five weeks but military chiefs took the decision to focus on speed so they could return to the frontline.

Some of the translators working alongside British and Ukrainian troops fled to the UK as refugees after Vladimir Putin invaded Ukraine.

Captain James Oliphant, who oversaw the training on the MLRS system, said: “Now they are extremely competent on this system, it is like showing a child how to ride a bike. They don’t want you holding onto the back of the seat anymore.

“They are very much at the point where they just want to get back and start operating that equipment.”

Captain Oliphant said British troops worked alongside the Ukrainian soldiers “from 8am to 6pm seven days a week for the whole period that they have been here.”

In total, British troops have trained more than 450 Ukrainian soldiers on a mixture of MLRS, L119 light guns, air defence techniques and surveillance and target acquisition in recent weeks.

Ukrainian commanders revealed they were “really impressed” with the British MLRS and they are now turning their attention to how they can use the rocket systems to repel the Russian advances in the Donbas.

Kyiv has been pleading with the West for more heavy – long range – artillery systems to strike Russian forces advancing through eastern Ukraine.

The Kremlin is relying on brutal artillery assaults to pound Ukraine into submission.

A Ukrainian major told the Daily Express that Britain giving Kyiv the MLRS will give the war-torn nation fresh hope they can repel Moscow’s killers.

He said: “When others in our armed services realise we have MLRs they will have strong motivation.That is so critical for all of us.

“Not only for the armed forces, but for all of the Ukrainian people, just to understand that we are powerful.

The Ukrainian commander added: “Our Ukrainian guys are in a combat mood and are ready to return back. They understand they are preparing to improve the situation. We are confident it will help us in our struggle.

An instructor talks to a group of soldiers during tactical gun practice on June 28, 2022 in Kharkiv (Image: Getty)

“A month ago, all of the Ukrainian troops who are here were on the battlefield. We are here to improve our knowledge, to get something new, to continue our struggle.

“The only word I can use to describe the feeling is tiredness.

“They are really tired. In the beginning, they were a bit scared about the situation. Now they are just tired.

“But in the same way, they are so motivated to continue their struggle.

The major said the Ukrainian troops were “really impressed” with the weapons systems.

He said: “We are confident we will have the possibility to win using these systems.

“The tactical characteristics of these systems are much better than our Ukrainian systems. It is much better for us to use against the Russians.

“It is about its mobility and its speed and the accuracy of this system and the survivability of this and the Ukrainian troops.”

Captain Oliphant admitted it was clear there was extra motivation for the Ukrainian troops and revealed “they are extremely keen to learn”.

He said: “When we found out that they were professional rocket artillerymen, the tempo of the course and delivery of it became much easier. We were talking the same language despite the language barrier between Ukrainian and English.

“We have got a very deliberate approach to the training pipeline in the British army, mainly hinged around safety and ensuring all of the drills and processes that we teach our soldiers are done so meticulously to not only reduce risk whilst we are training in the UK and abroad but also on operational deployments. The Ukrainians will be taking a different approach.

“We have been teaching them from 8am to 6pm seven days a week for the whole period that they have been here.

“Their appetite at the beginning was as you can image extremely high and very needy but as they have become more attuned and accustomed to the system they have started to calm down and now they are in a position where the commander himself is now exercising his troops under his own doctrine and tactics.”

Groups of instructors, supported by translators, would work alongside the Ukrainian troops as they were shown how to set up, aim and fire the L119 systems.

Firstly they were shown the weapons are safe, before they built up to firing at specific distances.

She said: “I know they are happy with this system.

“This is like a conversion course. Their motivation to be quick to learn is incredible. They don’t really take many breaks. They are here to learn.

“They know that their window of learning is reasonably short so the motivation to get as much knowledge as they possible can has been noted – they just work, work and work and they ask a lot of questions.

“It can be slung in the back of helicopters, pushed around, uphill, downhill, dragged by trucks big and small. It is a great weapon for what they are going to use it for.”