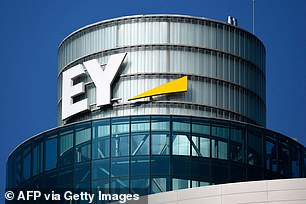 Split: EY’s global leaders have given the go-ahead for a proposal to break up its audit and consulting businesses

The accountancy industry faces its biggest overhaul in decades after EY bosses approved a plan to split up the Big Four firm.

EY’s global leaders have given the go-ahead for a proposal to break up its audit and consulting businesses, meaning the fate of the accountancy and auditing giant rests in the hands of its 13,000 partners.

The partners will vote on the proposal in the coming months, but the result will not be known until early 2023.

The voting rules will vary by country, but in the UK, 75 per cent of its partners are required to back the plan if it is to be ratified.

EY, Deloitte, KPMG and PwC have come under increasing pressure to start ring-fencing their audit and consulting arms.

It is hoped the move will reduce conflicts of interest following major corporate collapses such as Carillion and BHS.