The first part of the ‘pioneering’ test, developed by researchers at University College London, is called DARC.

DARC involves injecting dye into a person’s bloodstream to illuminate ‘stressed’ endothelial cells in the retina, so they appear bright white under a fluorescent camera.

These ‘stressed’ retinal cells could lead to abnormalities and later leaking blood vessels – causing AMD, which can severely compromise the central field of vision.

The second part of the test uses an AI algorithm, trained to detect whether the highlighted white spots are around the macula – which indicates high AMD risk.

The AI is more objective and consistent than the judgements of human clinicians, and it can also analyse thousands of images of the retina.

Researchers say their test could be used to identify the disease early enough so that treatment can effectively prevent any vision loss. 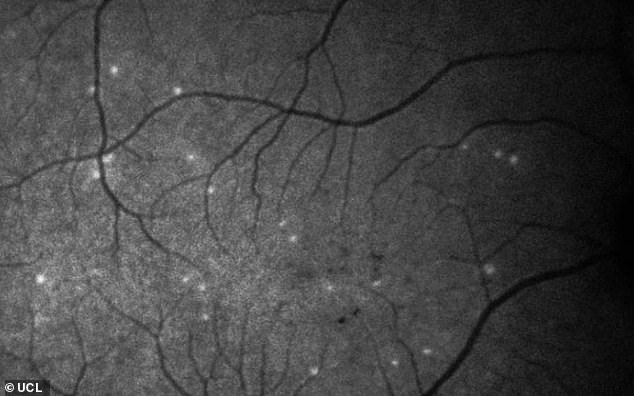 DARC (detection of apoptosing retinal cells), involves injecting into the bloodstream (via the arm) a fluorescent dye that attaches to retinal cells, and illuminates those that are undergoing stress or in the process of apoptosis, a form of programmed cell death

AMD doesn’t cause total blindness but it can make everyday activities like reading and recognising faces difficult.

There are two types of AMD – ‘dry’ AMD and the more severe ‘wet’ AMD, which is the most common cause of permanent and severe sight loss in the UK.

Wet AMD is generally caused by abnormal blood vessels that leak fluid or blood into the retina.

Age-related macular degeneration (AMD) is a painless eye condition that leads to a gradual loss of central vision.

It is the most common cause of visual impairment in the UK and US, striking 600,000 adults in the UK and less than two million in the US.

It occurs when the macular – the part of the eye responsible for central vision – stops functioning effectively.

AMD usually affects both eyes, but the speed of progression can vary between eyes.

It is thought to be triggered by ageing, smoking and genetics.

Specifically, fluid or blood is leaked into the macula, which is the part of the retina responsible for central vision.

This causes blurred vision or a blind spot in the field of vision.

Meanwhile, dry AMD – which causes blurred or reduced central vision, due to thinning of the macula – is more common and less severe, but can progress to wet AMD.

Currently, the diagnosis of wet AMD relies on a person developing symptoms, which then leads them to seek advice from a clinician.

Initially, someone with wet AMD would notice distortion in their vision, normally interfering with their reading, and this can very quickly progress to complete central vision loss.

‘The introduction of new treatments has led to much improved results for patients, for a disease that over 20 years ago was regarded as untreatable,’ University College London (UCL) said in a statement.

‘However, patient outcomes could be even better if treatment was started in the very earliest stages of the disease.’

The first part of the test is called ‘detection of apoptosing retinal cells’ (DARC).

DARC involves injecting into the bloodstream (via the arm) a fluorescent dye that attaches to retinal cells, and illuminates those that are undergoing stress or in the process of apoptosis, a form of programmed cell death. 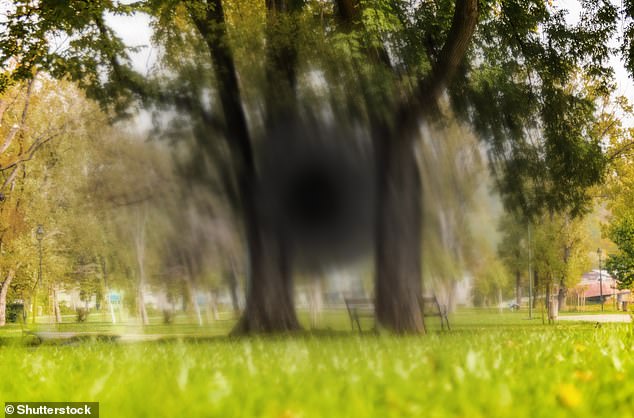 Macular degeneration (AMD) is a medical condition which may result in blurred or no vision in the centre of the visual field. It’s the leading cause of blindness

One challenge with evaluating eye diseases is specialists can disagree when viewing the same scans, so the experts incorporated an AI algorithm into their method.

This AI was already used earlier in the year to detect glaucoma progression 18 months earlier than the current gold standard method.

For this study, researchers assessed 19 study participants who had already shown signs of AMD, but not necessarily in both eyes.

The AI was newly trained to detect the formation of leaking and new blood vessels, which corresponded with the spots that DARC picked up.

The new analysis found DARC can uniquely highlight the endothelial cells, which line our blood vessels, under stress in the retina. 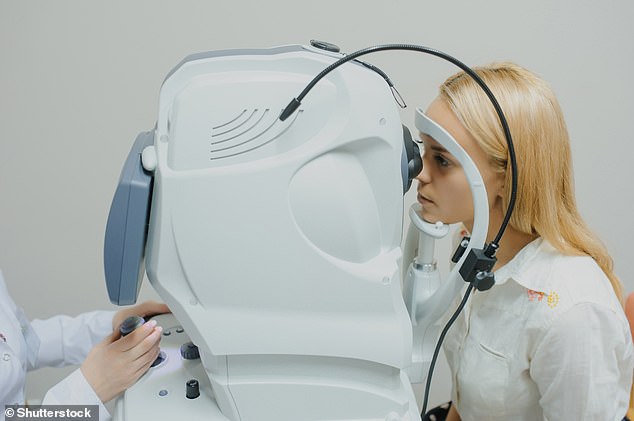 OCT is a non-invasive diagnostic technique that renders a cross sectional view of the retina.

OCT usually only detects fluid that has already leaked from blood vessels – which occurs months after the blood vessels are established.

But DARC identifies the endothelial cells that lead to the formation of the leaking blood vessels, leading to a much earlier diagnosis.

The researchers say their test could be valuable in detecting new lesions in someone affected by AMD, often in the opposite, unaffected eye, and may eventually be useful for screening people over a certain age or with known risk factors.

‘The importance of the AI element is it is a rigorous way of defining a DARC spot,’ said lead researcher Francesca Cordeiro, a professor of Ophthalmology at UCL.

‘Our results are very promising as they show DARC could be used as a biomarker for wet AMD when combined with the AI-aided algorithm.

‘Our new test was able to predict new wet AMD lesions up to 36 months in advance of them occurring and that is huge.

‘It means that DARC activity can guide a clinician into treating more intensively those patients who are at high risk of new lesions of wet AMD and also be used as a screening tool.’

The study team hope to continue their research with a clinical trial with more participants, and hope to investigate the test in other eye diseases as well.

DARC is being commercialised by Novai, a newly formed London-based company of which Professor Cordeiro is chief scientific officer.

The findings of the study are published in Expert Review of Molecular Diagnostics. 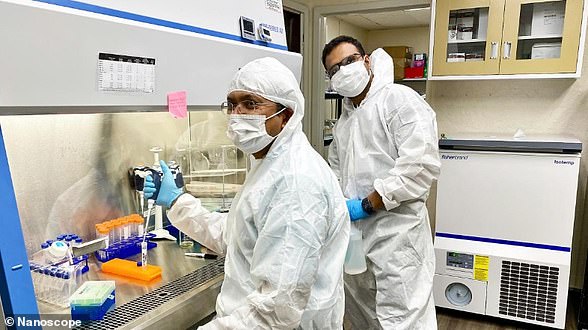 Scientists have used gene therapy to restore sight in blind mice and plan to start clinical trials of the technique on humans later this year.

Key to the process is a light sensing protein called MCO1 opsin, which restores vision when attached to specific cells at the back of the eye.

These so-called bipolar cells, which remain intact in people with common eye diseases, are part of the sensory pathways for light perception and vision.

In trials by the US firm Nanoscope, totally blind mice with no light perception were shown to regain significant retinal function and vision after treatment.

Treated mice were faster in visual tests in the lab, such as navigating mazes and detecting changes in motion.

In humans, the therapy would be administered as a single injection into the eye for elderly people with age-related macular degeneration and retinitis pigmentosa (RP). 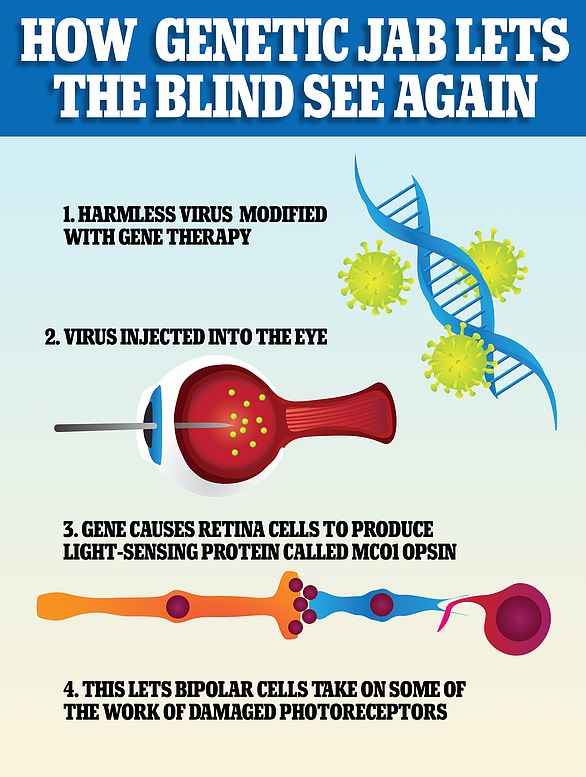 Nanoscope’s therapy requires a one-time injection of a modified virus into the eye. This causes retina cells to produce a light-sensing protein (MCO1 opsin), which restores vision when attached to bipolar cells at the back of the eye

‘For example, how well treated eyes can pick out fast-moving objects.’

The researchers found no concerning safety issues in treated mice and examination of blood and tissues found no signs of inflammation due to treatment.

Under a best-case scenario, the therapy could help patients achieve 20/60 vision, meaning they’ll be be at 20 feet to see what a person with normal vision can see at 60 feet.

However, the team aren’t certain how the restored vision will compare to normal vision of a person with healthy eyes.

‘If this optogenetic approach using cells spared in degenerated retina can prove to be effective in vision restoration in humans, beyond light perception, it could offer a valuable alternative to the retinal prosthesis approach for people with late-stage retinitis pigmentosa,’ said PaekGyu Lee at the National Institutes of Health, which funded the project.

A variety of common eye diseases including age-related macular degeneration and RP damage the photoreceptors – the cells in the retina that respond to light – which impairs vision.

Mosaic floors from the 1,500-year-old lost 'Church of the Apostles' are discovered in Israel