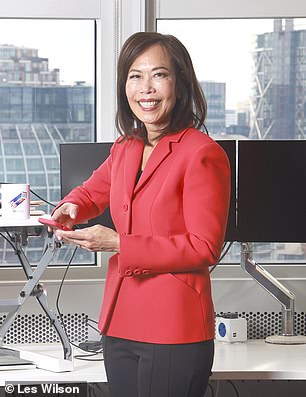 For most of us, a sinking pound doesn’t register until we head off on holiday. But for June Felix, boss of trading firm IG Group, the crumbling value of sterling is firmly on the radar as summer vacations are fading into memory.

The opportunity, as she sees it, is the white-knuckle ride on currency markets as the threat of recession grips the world, coupled with interest rate hikes as central banks try to wrestle with red-hot inflation.

‘It’s a market showing a lot of volatility. They spot opportunities in that,’ Felix observes from IG’s City office overlooking the Thames, referring to City and kitchen table speculators alike.

Praising Kwasi Kwarteng’s Budget on Friday for ‘maintaining the UK’s global competitiveness’, Felix was sanguine about the resulting negative reaction on currency and debt markets.

The pound plumbed depths not seen in 37 years. Market drama like this may be painful for importers and push up inflation for ordinary families, but it has been a boon for IG.

The FTSE250 firm this month celebrated an 11 per cent rise in revenue to £242million in the three months to August and Felix points out full-year results for the 12 months to May held up better than many of its peers.

Even with the cost-of-living crunch causing many households to tighten the purse strings, Felix, 65, is optimistic that activity will remain strong. When IG recently asked 5,000 clients around the world where they would personally cut back, top of the list was luxury goods, holidays and entertainment.

Scaling back on their trading activities was right down the list, along with the likes of food and transport, Felix says. ‘They see it as their tool for achieving their financial goals. They see it as a thing that’s in their power to get better at and make a difference,’ she explains.

‘If you just put your money into a savings account, that doesn’t really go very far, despite interest rate growth.’

She says customers are hooked on the swings and falls of economic data like never before. She compares them to ‘race car drivers’ for the ‘agility and nerve’ they show when moving in and out of positions. ‘I was just watching a Formula 1 YouTube thing,’ she laughs in an attempt to explain the analogy.

Younger savers are starting to realise this too. While IG’s customer base has traditionally been male and middle-aged, the company is starting to see more young female clients, according to Felix.

This is especially the case in Asia and the US – which Felix attributes to the lower prevalence of pension schemes and state welfare.

‘In both of those markets, part of the fundamental reality is that you have to take care of yourself,’ she says. ‘That forces you to think not just about the shares in your own company, whether they’re going up or down, but also in general. How do I have enough, at some point, to retire?’ The diversification into the US and Asia, as well as the acquisition of companies which appeal to a younger audience such as Tastytrade, was a key pillar of Felix’s growth strategy for IG when she took the helm in 2018.

Her predecessor, former Royal Navy officer Peter Hetherington, left the 48-year-old company amid criticism that he had failed to branch out.

That flaw became all too clear when the City watchdog mounted a crackdown on the risky financial products IG offered – contracts for difference (CFDs).

They allowed investors to bet on the price of an asset going up or down, and could result in heavy losses.

Regulators were worried inexperienced traders were being exploited. It was a sharp reminder that investors at all levels – but particularly naive, inexperienced or perhaps desperate ones – can lose out.

IG says it now runs screening checks to make sure its clients are ‘sophisticated’ investors.

While IG’s shares have climbed 36 per cent in the four years Felix has held the reins, she admits that she is often still treated with scepticism.

‘I think people are always surprised when they find out what I do,’ she says. Addressing sexism in the City, she adds: ‘Every woman in this seat or anything close to this seat has had it happen. We just have to be like Teflon and not let it pierce the heart.

It’s hard to imagine Felix, quietly spoken but with a steely determination, being vulnerable. She relishes, rather than dreads a challenge.

‘It’s ingrained in me because I am the product of Chinese immigrants. My father came to the US when he was 14, didn’t speak any English, graduated number one in his class at 18, went on to university, but then chose to go back and fight the Japanese as a Chinese American,’ she says.

‘If you come from an immigrant family which transports themselves to a country and creates a successful life for themselves, you think everything’s possible.’

Born in Pittsburgh, US, Felix now lives in North London. Her husband, Peter, is British and together they have one son. And while Felix lives a comfortable – if busy – life, taking home £3.6million last year, it hasn’t always been this way.

Her first formal job, at 16, was in a McDonald’s. ‘I worked with a woman who was 60,’ Felix says. ‘I thought, I’m never going to be that person, if I can help it. And the way to do that is to try and create a better life for yourself.’

This caused her to realise the importance of education and financial literacy early on.

IG’s various businesses now focus on informing their clients, through videos and classes, and the firm partners with charities Teach First and Teach for All.

‘Growing up, I saw real-life examples of people who ran laundromats, and their children went off to Harvard or Yale or Princeton or became doctors or engineers,’ she says. ‘There was opportunity. That belief that education opens doors, creates potential, is really important to me.’

When it comes to the fortune of the UK, Felix is hopeful. She wants new Prime Minister Liz Truss to invest in education, but also to focus on making the City of London competitive with its global peers and ensure business is seen as a force for good.

‘I wish the new Prime Minister all the luck in the world because we’re all banking on her,’ Felix says.

‘It’s a great leadership moment – she has the chance to help move the ship in the best possible direction.’