Tom Felton was among one of the first stars arriving to host the premiere for Fantastic Beasts: The Secrets Of Dumbledore on London’s Southbank on Tuesday.

The actor, best known for his role as Draco Malfoy in the Harry Potter film series, grabbed a quick selfie with fans as he arrived to front the red carpet coverage.

Fantastic Beasts’ release has been marred by a string of controversies in recent months including Johnny Depp being dropped from the film in the wake of his libel woes, along with writer JK Rowling who has been heavily criticised for her comments about the transgender community.

Sporting a midnight blue suit, Tom was greeted by an army of fans as he arrived to present the star-studded red carpet event, briefly pausing to snap a selfie with a fan.

Also in attendance was JK Rowling, who penned the iconic book series which sparked the Fantastic Beasts spin-off series, and she cut a glamorous figure in a form-fitting navy blue gown.

The dress boasted a sparkling silver diamante neckline and a dramatic thigh-high split, and flowed into a matching cape. 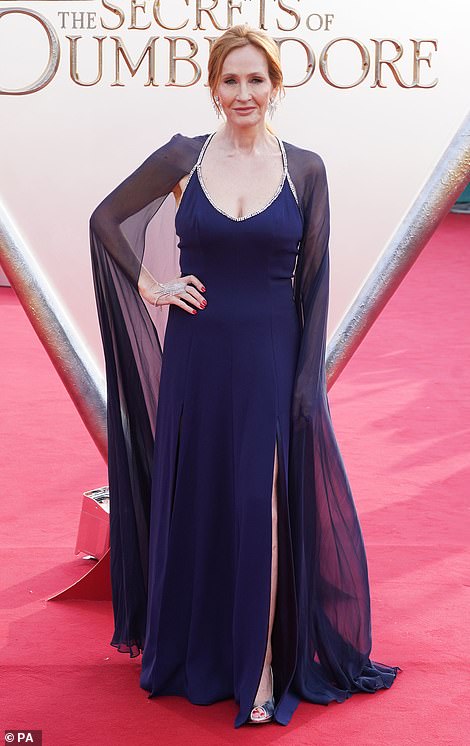 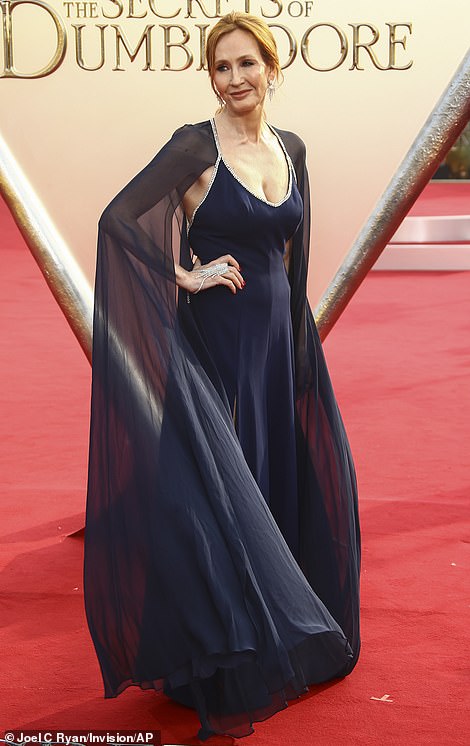 Stunning: Also in attendance was JK Rowling, who penned the iconic book series which sparked the Fantastic Beasts spin-off series, and she cut a glamorous figure in a form-fitting navy blue gown

The third film in the Fantastic Beasts series sees Newt Scamander assemble a motley crew of wizards and witches to try and save the world.

The motley crew will be joining forces to take on the powerful dark wizard Gellert Grindelwald, who seeks domination over the wizarding world.

Mads Mikkelsen is set to take over the villainous role after replacing Johnny Depp. 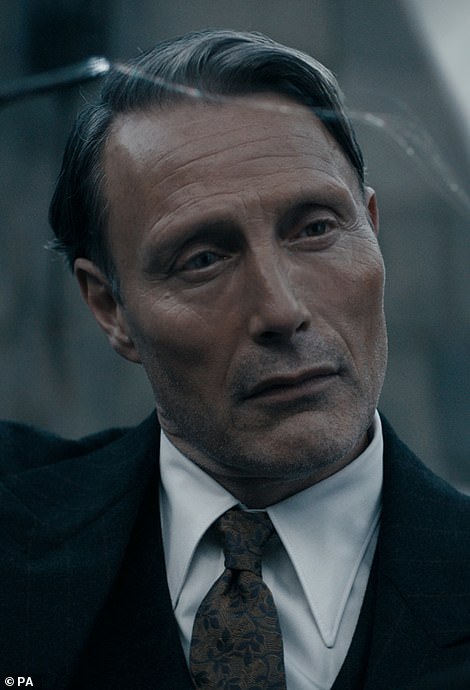 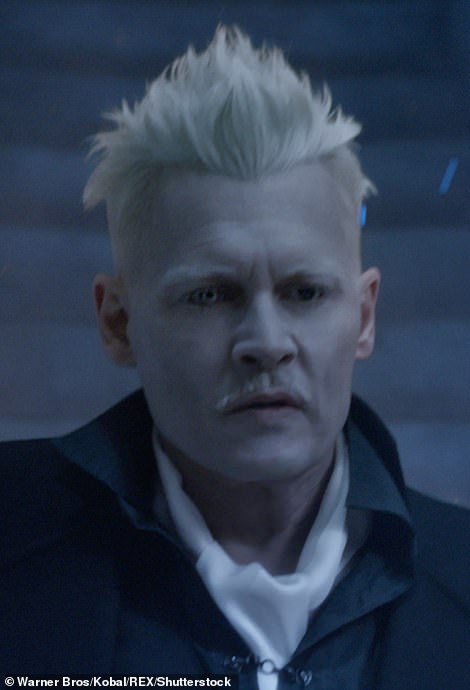 Moving on: Mads Mikkelsen (left in the film’s trailer) is set to replace Johnny Depp (right) in the film series as the villainous Grindewald, after the actor was dropped from the series in the wake of his legal battle with ex-wife Amber Heard

It was announced in 2020 that the 56-year-old Danish actor would be replacing Johnny, 58, as the dark wizard after he was denied permission to appeal his libel loss in the High Court, after they found a story that he assaulted ex-wife Amber Heard to be ‘substantially true.’

Masrecently admitted he regrets not speaking to Johnny before taking over the role, adding that he didn’t know if his treatment had been fair.

In an interview with The Sunday Times, he said: ‘I don’t know what happened [in his private life] and I don’t know if it was fair, him losing the job, but I just knew that the show was going on.

‘And I would’ve loved to have talked to him about it if I had the chance, but I just don’t know him in that sense.’

Going on to reveal he would be putting his own spin on the iconic role, he added: ‘My take is different, and the look is a little different, but we’ll have to wait for the film’s release to find out.’

The Danish star officially replaced Johnny as Gellert in the third Fantastic Beasts movie after the latter took to Instagram to reveal he had ‘been asked to resign by Warner Bros’.

Mads was said to be the top choice of director David Yates as the studio had waited to see how Johnny’s defamation lawsuit against The Sun would pan out.

When a British judge ruled in favor of the publication – which Johnny had sued for referring to him as a ‘wife-beater’ in regards to his relationship with ex-wife Amber Heard – Warner Bros. decided to sever ties with the veteran actor.

The Edwards Scissorhands star had only shot one scene of the sequel, though his ‘pay-or-play’ contract allows him to keep the full $10 million he was paid for the role.

The actor also has a defamation lawsuit against Amber in Virginia, which required him to be in court for three consecutive days in November, and would have also altered the project’s shooting schedule.

The studio notified the production that the Kentucky-native was taken off the schedule on November 5, according to The Hollywood Reporter, a day before Depp made his resignation public.

The studio released a brief statement shortly thereafter, indicating that the role of Gellert Grindelwald will be re-cast.

‘Johnny Depp will depart the Fantastic Beasts franchise. We thank Johnny for his work on the films to date,’ the statement began.

‘Fantastic Beasts 3 is currently in production, and the role of Gellert Grindelwald will be recast. The film will debut in theaters worldwide in the summer of 2022,’ the statement concluded.

Johnny debuted as Grindelwald with a surprise cameo at the end of 2016’s Fantastic Beasts and Where to Find Them.

He returned to star alongside Eddie Redmayne’s Newt Scamander and Jude Law’s Albus Dumbledore in 2018’s Fantastic Beasts: The Crimes of Grindelwald.

Fantastic Beasts: The Secrets of Dumbledore is set to hit UK cinemas on April 8 2022 with a US release following a week later on April 15.