Dr Anthony Fauci warned that the number of new coronavirus cases recorded every day has flattened at a ‘disturbingly high level.’

On Wednesday, the country reported 75,038 infections with a seven-day rolling average of 65,882, marking the 13th day in a row that the average has topped 60,000, according to a DailyMail.com analysis of Johns Hopkins University data.

Earlier this week, the nation’s top infectious disease expert said that he believed the U.S. mass vaccination campaign would prevent a fourth surge of cases.

But speaking to CNN’s Anderson Cooper on Wednesday, Fauci said he is concerned that the number of daily cases has not notably decreased for some time.

‘When we had the big spike [in the winter]…then it came back down, but now it’s plateaued at a disturbingly high level…when you’re at that level, there is the risk of getting a surge back up.

‘It’s almost a race between getting people vaccinated and this surge that seems to want to increase.’

What’s more, nearly half of U.S. states, 22 in total, are reporting an increase in new cases, according to Johns Hopkins data.

It comes as the U.S. also recorded 2,570 COVID-19-related fatalities, the highest figured seen since February 24, the analysis found.

Since the start of the pandemic, the country has recorded more than 30.9 million confirmed coronavirus cases and more than 559,000 deaths. 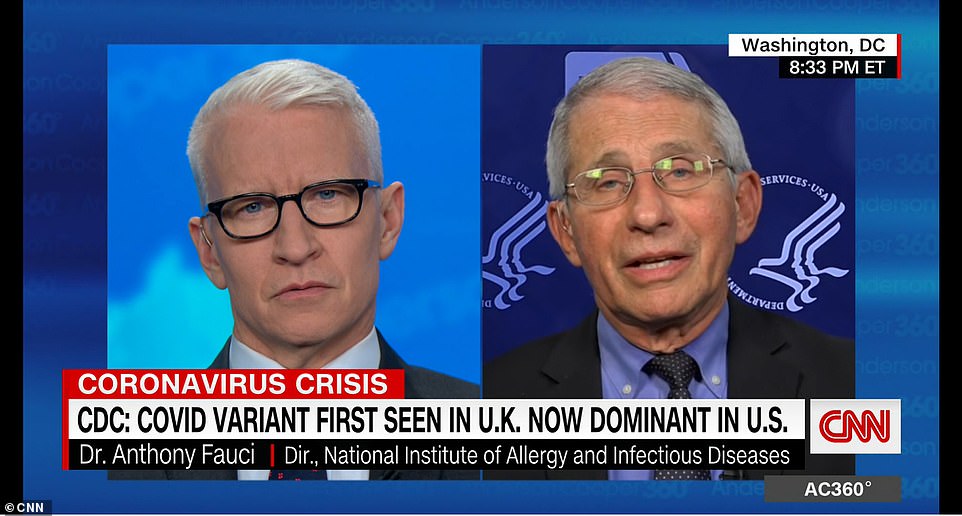 Dr Anthony Fauci said on CNN on Wednesday said that cases have plateaued at a ‘disturbingly high level’ and that there is a risk of a surge, just one day after he said he believed the U.S. mass vaccination campaign would prevent a fourth wave 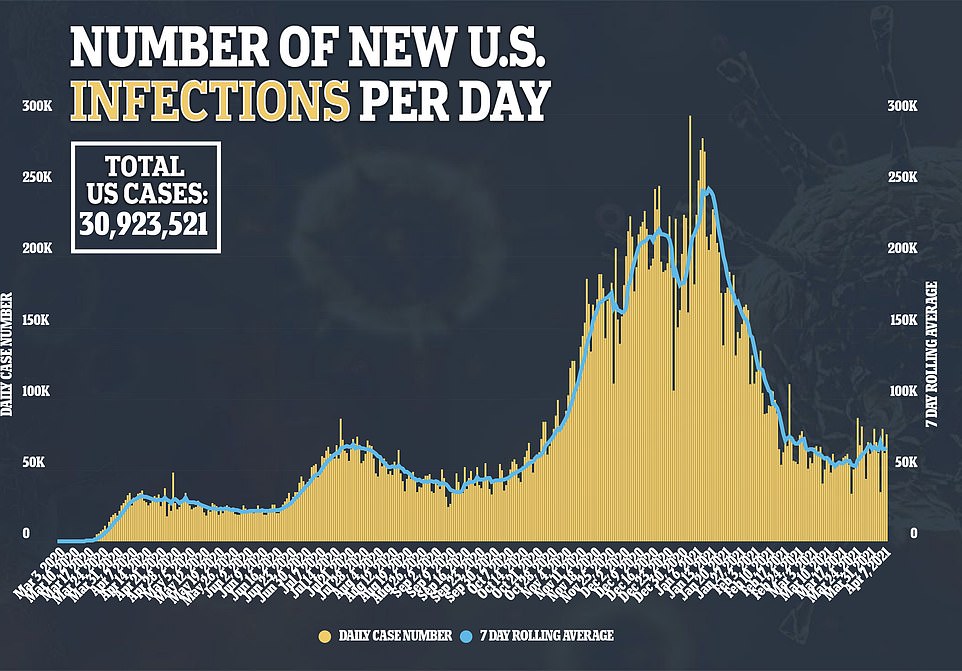 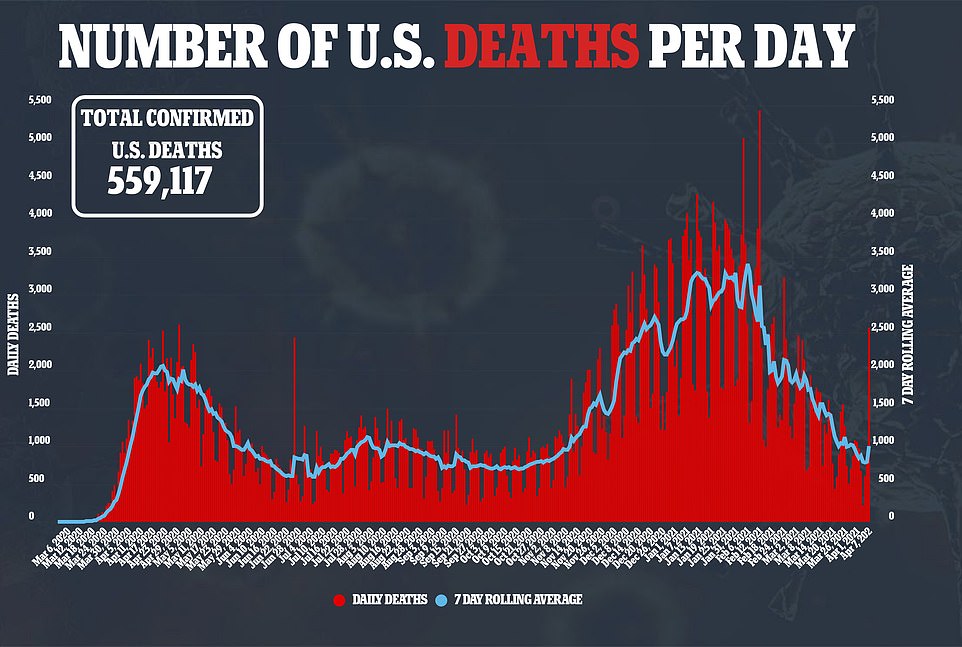 A total of 2,570 COVID-19 fatalities were recorded on Wednesday, which is the highest number reported since February 24 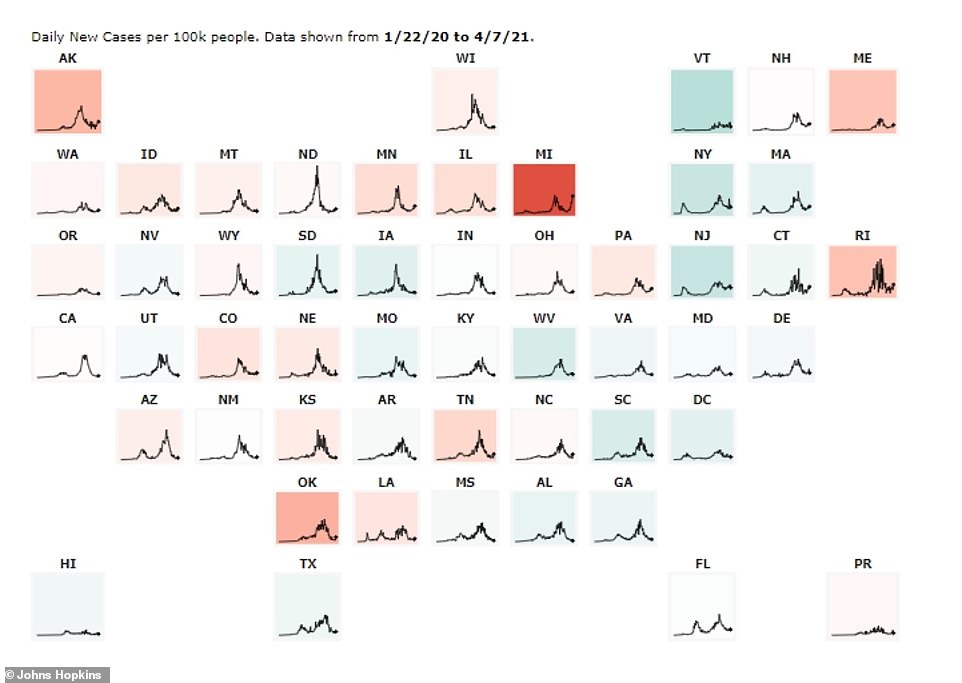 Nearly half of U.S. states, 22 in total, are reporting an increase in new coronavirus cases, according to Johns Hopkins data

Over the last week, the U.S. has averaged more than 64,800 cases per day, according to data from Johns Hopkins.

Fauci told CNN that there are a few reasons for the high number of cases including a high number of infections among daycares and school sports teams.

‘I think that is what is explaining these surges of cases in young individuals,’ he said.

To back up his claim, he noted that more than 75 percent of Americans aged 65 or older have received at least one dose of the COVID-19 vaccine.

Fauci said the other reason for the spike in cases is the variant first identified in the UK, known as B.1.1.7.

During a press briefing yesterday, the Centers for Disease Control and Prevention (CDC) director Dr Rochelle Walensky said the variant had become the dominant strain in the U.S.

To prevent a surge, Fauci urged the general public to get vaccinated  when it’s their tun and to keep following public health measures such as wearing masks and social distancing.

‘Hang in there a bit longer…Now is not the time, as I’ve said so many times, to declare victory prematurely,’ he said.

Michigan continues to lead the country in COVID-19 cases, recording 9,369 on Wednesday – the highest total in the U.S. and a 101 percent increase from two weeks ago. 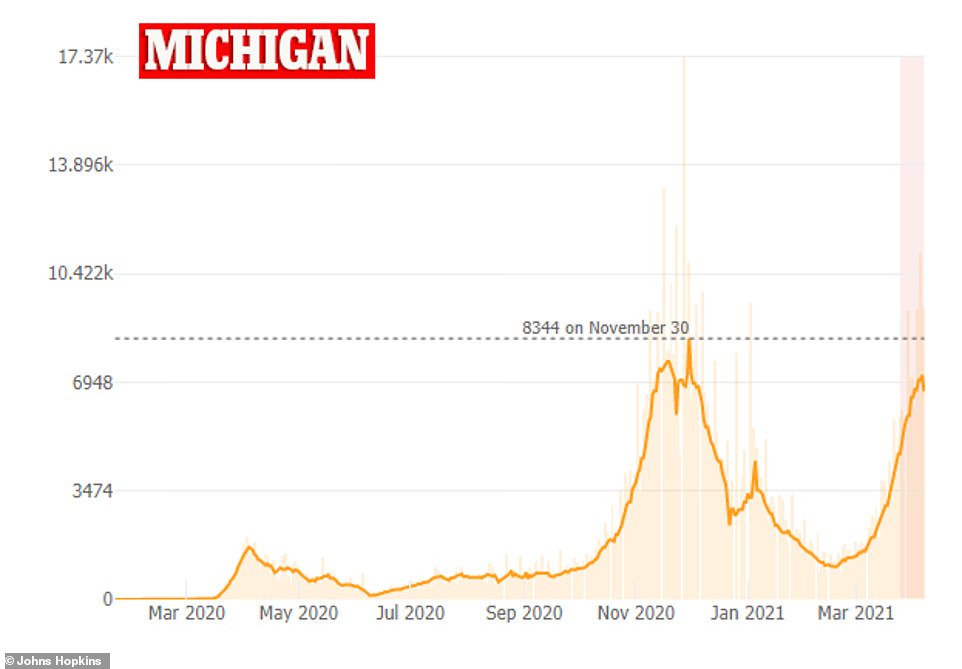 Michigan continues to lead the country in COVID-19 cases, recording 9,369 on Wednesday, which is a 101% increase from two weeks ago 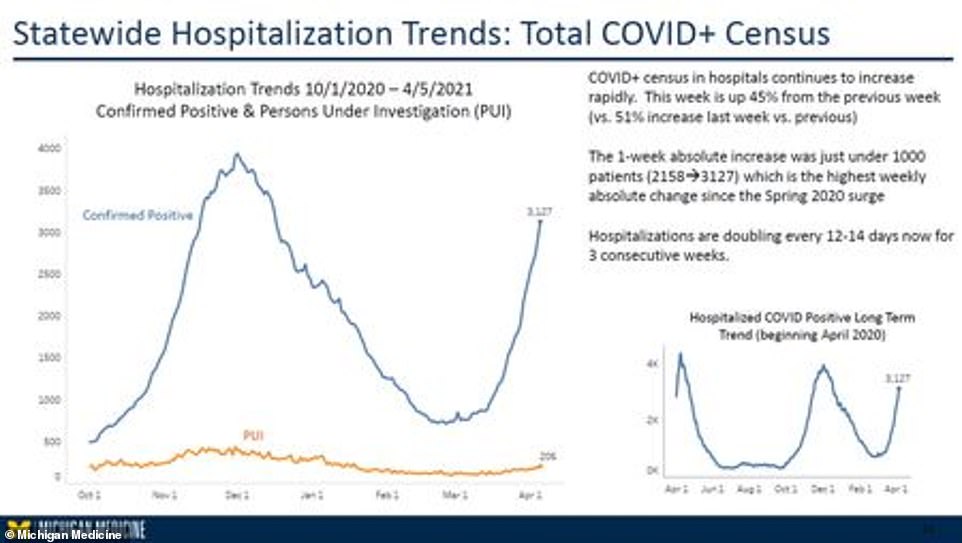 A recent model from Michigan Medicine predicts that as early as April 12, a recored 4,522 Michiganders could be hospitalized with COVID-19 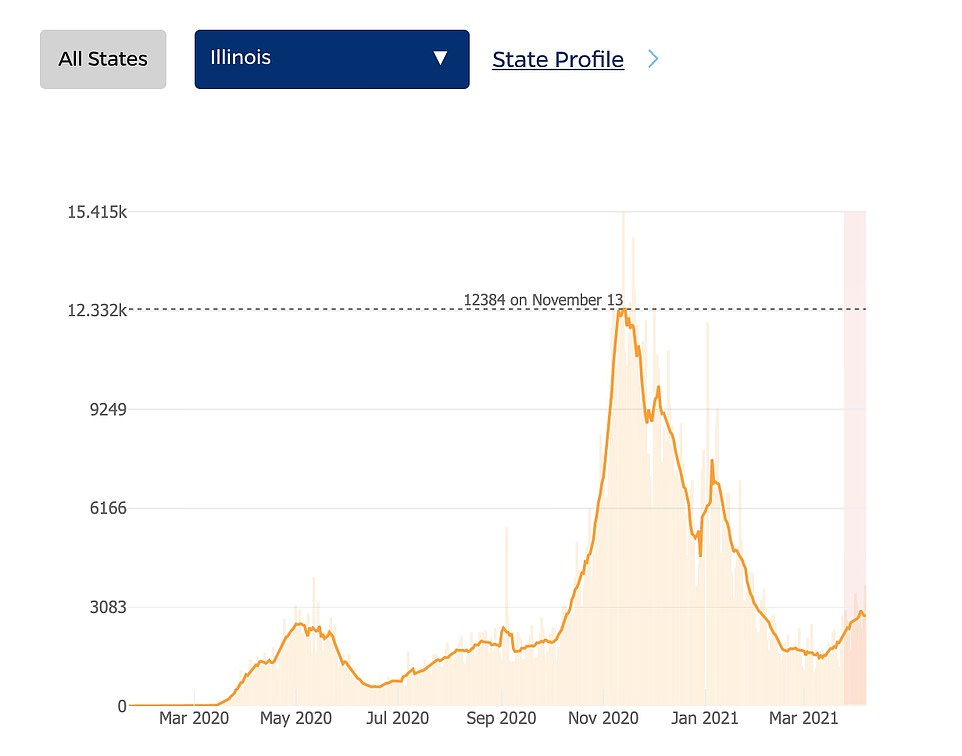 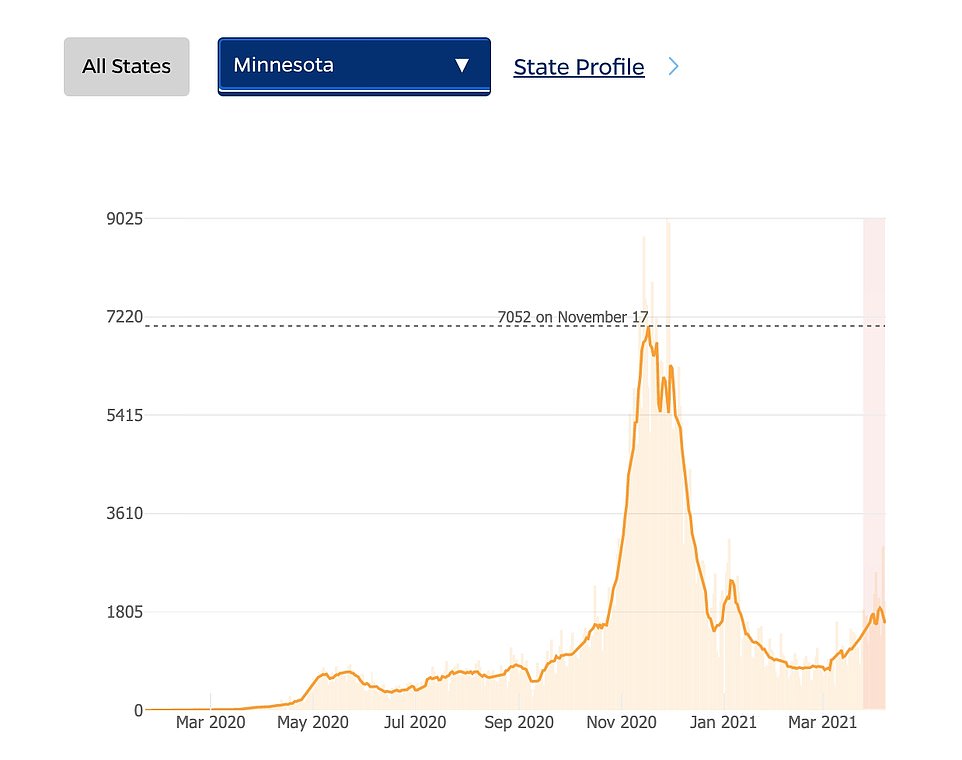 In Minnesota, 1,597 infections were reported, which is a 12% increase from two weeks ago

The Great Lake State also leads the nation in the number of inpatient hospital and ICU beds being used to treat coronavirus patients.

Currently, 11.9 percent of inpatient beds are being utilized, which marks a more than 200 percent increase since late February.

Governor Gretchen Whitmer said health officials are keeping a close eye on hospital numbers, which will help dictate whether or not restrictions are tightened.

‘You know, we’re talking to our hospitals every single day just to check in, see what the rates are, see if they’re getting concerned,’ Whitmer said on Wednesday, according to Michigan Live.

‘At this juncture…we do have hospitalizations that have gone up but they’re nothing like what we saw last spring, when we were so worried about our health system collapsing.’

However, a recent model from Michigan Medicine predicts that as early as April 12, 4,522 Michiganders could be hospitalized with COVID-19, reported Michigan Live.

That would be a record high figure, even higher than the 4,365 patients hospitalized during the peak of the April 2020 surge.

Michigan is not the only state in the Upper Midwest reporting an increase in new cases and hospitalizations. Both Illinois and Minnesota are also seeing spikes.

On Wednesday, Illinois recorded 2,815 new cases, which is a 19 percent increase from the 2,279 reported 14 days prior, Johns Hopkins data shows.

And in Minnesota, 1,597 infections were reported, which is a 12 percent increase from two weeks ago. 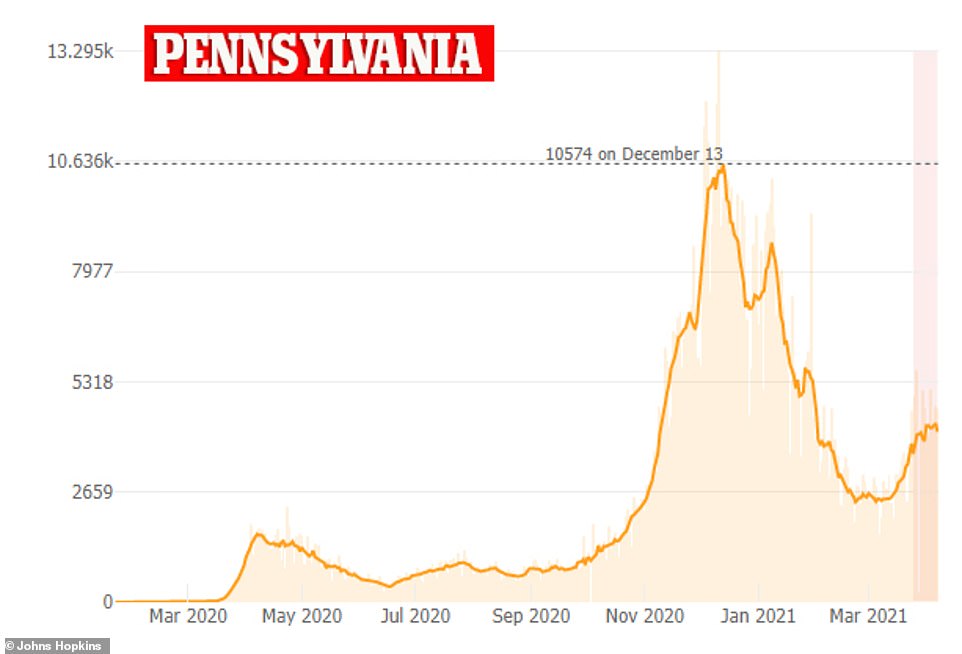 Pennsylvania is also reporting a spike in cases, recording more than 4,600 cases on Wednesday, which is a 75 percent rise in average infection since mid-March 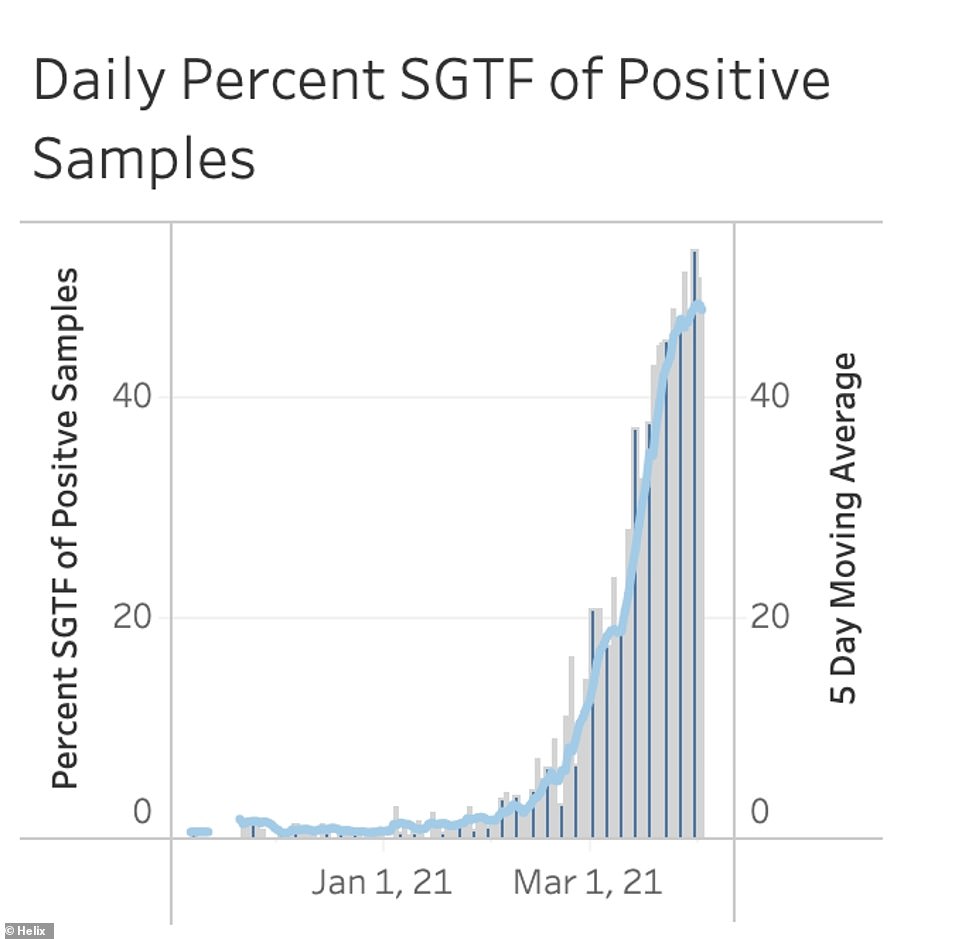 The rise in the state is believed to be linked to B.1.1.7, which now accounts for about 46% of samples analyzed by genetic testing company Helix

Cases are also rising in Pennsylvania, which reported more than 4,600 cases on Wednesday.

According to an analysis by The Philadelphia Inquirer, infections have spiked nearly 75 percent since mid-March from a rolling-average of 2,500 cases per day to 4,200 cases per day.

Hospitalizations are also increasing with 2,384 patients hospitalized with COVID-19 on Wednesday, according to data from the Department of Health.

That’s a 46 percent increase from the 1,631 patients reported two weeks ago.

The rise in cases and hospitalizations is believed to be due to an increase in cases linked to B.1.1.7.

The Inquirer found that the variant made up nearly half of Pennsylvania samples, 46 percent, analyzed by genetic testing company Helix.

It represents a massive jump from mid-March, when just 20 percent of cases were associated with the variant.

Coronavirus: Brazilians told to delay having children ‘until a better moment’ as variant spreads