The Duke of Cambridge was jeered by fans as he shook hands with players at a packed Wembley Stadium on Saturday. His treatment led former Culture Secretary Karen Bradley to join others in condemning the booing.

Ms Bradley told the Mail: “It is utterly unacceptable and disgraceful that fans booed Prince William.

“I would urge the [Football Association] to take all necessary action and pursue those responsible.”

In response, Mr Oluwole tweeted: “According to the Tories, fans have the right to boo racial equality, but if they boo Prince Charles, it’s straight to the gulag.

“MP Karen Bradley is making sure we all see the blatant fascism and racism of the Tory party.” 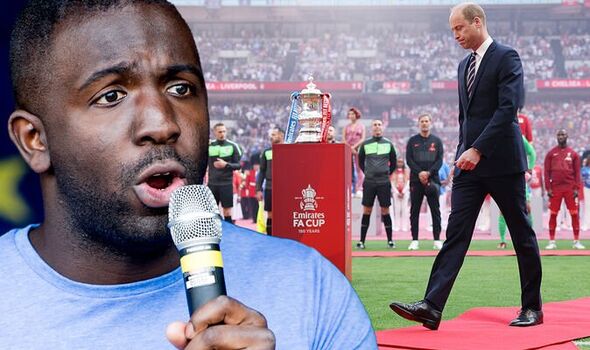 Remainer Femi Oluwole has condemned the Tories as ‘racists and fascists’ (Image: Getty)

Fellow Twitter users pointed out that it was William who was booed at the FA Cup final and not the Prince of Wales.

The tweet was accompanied by a screenshot from an article entitled “Priti Patel says fans have right to boo England team for ‘gesture politics’ of taking the knee” published in June last year.

Asked whether England fans had a right to boo England’s national team, Ms Patel is quoted in the Independent, saying: “That’s a choice for them quite frankly. I’ve not gone to a football match to even contemplate that.”

Ms Patel’s remarks came in the wake of some fans opposing footballers taking the knee to protest systemic racism.

READ MORE ABOUT A NEW SUPERMARKET CHAIN COMING TO THE UK

The Duke of Cambridge during the FA Cup Final (Image: Getty)

Liberal Democrat leader, Sir Ed Davey, is quoted along with Ms Bradley in the story a section of which was shared on Twitter by Mr Oluwole.

Sir Ed said: “We have the most wonderful Monarch and those fans who booed do not represent their clubs or country.”

“How exactly is that facist? Your idiotic editing shows that Ed Davey is also guilty. But he gets a free pass.”

DON’T MISS:
Dad is livid after neighbour targets him with letter about his lawn [REPORT]
Dr Shola backs FA Cup boos as she slams William ‘How out of touch?’ [REVEALED]
Crowd roars as Queen arrives on Royal Windsor Horse Show red carpet [LATEST]

According to the Tories, fans have the right to boo racial equality, but if they boo Prince Charles, it’s straight to the gulag.

MP Karen Bradley is making sure we all see the blatant fascism and racism of the Tory party. pic.twitter.com/6RUuEo5JbD

Fellow Twitter user @DavidColby10 agreed, adding: “When you’re calling Tories fascist and racists, it’s better if you remember to cut out the bit in your screen grab from the Lib Dems agreeing with them.”

The booing of Prince William has divided opinion with support shown for the monarchy as well as condemnation.

Karen Martinez said she felt “disgusted” by the crowd jeering at the Duke.

She wrote in a tweet: “Disgusted with Wembley booing Prince William and the National anthem especially after cleaning his diary to present Deborah James with her Damehood yesterday.”

Hayley Thomas branded the crowd’s actions as “rude”, and showing a lack of manners.

She wrote: “Manners don’t cost anything. I watched the final. I thought it was rude. Not doing themselves anymore favours behaving like that.”

A royal fan named Pooja slammed the fans’ actions as “disrespectful behaviour” while Sue Ibrahim wrote: “To boo Prince William and our National Anthem was outrageous.”

However, Republic chief executive Graham Smith, writing in Express.co.uk, said: “It’s okay to boo public figures. It’s a form of protest. That includes booing members of the royal family, who are about as public as public figures get.

“And there’s good reason to boo royals, because they represent something that a lot of people object to. Not Britain, but elitism, unearned wealth, limits on democracy and hereditary privilege.

“At a time when millions are suffering from the cost-of-living crisis, they also represent a deeply unequal and unfair society.”