Putin’s hand appears to shake before he meets with Lukashenko

But this is not the first time the Russian strongman has prompted speculation over his health and state of mind following his decision to launch a vicious invasion of Ukraine on February 24. There have been five separate occasions where evidence suggests Vladimir Putin could be suffering from a severe neurological disorder like Parkinson’s.

The visible and dramatic decline in Putin’s health has sparked some to question whether it has impacted his decision making during the horrendous atrocities in Ukraine.

Speculation surrounding the Russian dictator’s health was sparked back in November 2020 when political analyst Professor Valery Solovei claimed the president had cancer and Parkinson’s.

Professor Solovei claimed Putin had received treatment for the degenerative disease in February 2021, which was denied by the Kremlin amid rumours he would stand down in 2022.

But since then, Putin has done little to deter speculation about his health, appearing in public on numerous occasions showing signs of illness.

Most recently, the Russian despot was seen on camera showing signs of “hand and leg tremors” in a recent meeting with his Belarusian counterpart. 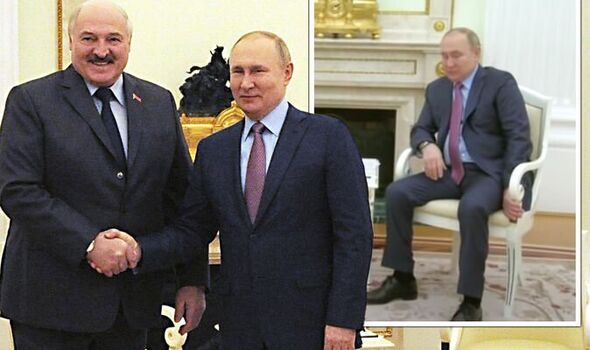 Putin has sparked speculation over his health (Image: RBC TV)

The shocking footage shows Putin holding one of his hands to his chest, and the other balled into a fist.

But as he moves towards the President of Belaru, Alexander Lukashenko, his right thumb makes a motion which could be viewed as a spasm.

He is then spotted looking unsteady on his feet and moving from one leg to another in order to balance.

In another appearance last week the Russian dictator can be seen gripping tightly onto his desk for most of a meeting with his defence minister Sergei Shoigu.

Putin can be seen gripping tightly onto his desk for most of a meeting (Image: KREMLIN)

Footage showed Putin visibly limping off the stage after delivering a speech, adding yet more weight to rumours the president is gravely ill.

Another wrote: “Frail Putin gathered all his strength to get out of his bunker and held a fascist rally today as if his life depends on it. He is right. He will get overthrown/killed w/o public support.

“This is a life-and-death situation for him. He has a severe limp – this was not televised.”

An ex-MI6 boss has said this month a number of behaviours exhibited by Putin could correspond with the disease.

Putin appeared to have a limp at this rally (Image: GETTY )

Former Tory MP Louise Mensch noted: “Putin has Parkinson’s disease and here you can see him gripping the table so that his shaking hand is not visible but he cannot stop his foot from tapping.”

Meanwhile, Putin put on an anxious and shaky display at an Easter service at Moscow’s Christ the Savour Cathedral, where he was pictured fidgeting and biting his lip.

And Putin did nothing to deter speculation when he appeared at a pro-war rally to commemorate the annexation of Crimea in Moscow back in March which was attended by thousands of supporters.

Sir Richard Dearlove, who headed up the secret service from 1999 until 2004, told GB news there is often a link between the disease and a “loss of restraint”.

He said: “Maybe Putin’s behaviour – maybe his rationality – is prejudiced or compromised by illness.

“The best explanation, that we don’t know whether it’s correct or not, is that he may have Parkinson’s.

“That certainly I’ve heard from several neurologists who say that loss of restraint, psychosis, are very common Parkinson’s symptoms.”

Parkinson’s is a neurodegenerative disorder affecting movement, typically on one side of the body.

Meanwhile, Professor Erik Bucy, from Texas Tech University, told The Sun: “t’s an astonishingly weakened Putin compared to the man we observed even a few years ago.

“This is not a portrait of a healthy Putin but one appearing increasingly feeble and barely able to hold himself upright at a small conference table.”