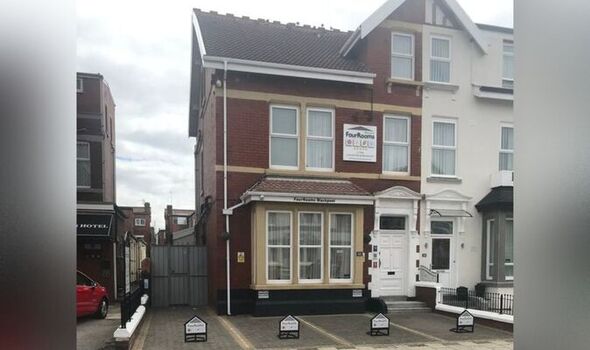 The owners of a popular B&B have lifted the lid on the disgusting mess left behind by one of their guests.

When the woman checked out, she made no attempt to warn of the horrors that awaited Michael Elt and Paul Sinnott.

The pair run Four Rooms Blackpool, a small luxury B&B which is very popular among guests.

The B&B has a 10/10 rating on Booking.com, a 5.0 rating on TripAdvisor, and a 4.9-star rating on Google, making it Blackpool’s most popular bed and breakfast, reports The Manchester Evening News.

The site caters to couples, with each of the four rooms complete with a super-king bed, and has some strict requirements for guests to help make it a pleasant experience for everyone.

Under 21s, stag and hen parties, and smokers are all excluded from the site, where Michael and Paul live, with guests also asked to avoid wearing outdoor shoes inside – with slippers provided.

Whilst the rules have helped the pair curate a warm and welcoming environment, leaving many guests keen to return to the site for a second stay, some visitors have taken advantage of the luxury accommodation, leaving quickly to avoid the shame of owning up to the disgusting mess left behind in their rooms.

Earlier this year, one woman who stayed at the B&B with her partner over the bank holiday weekend scurried off in the morning without stopping for breakfast, leaving the pair concerned that something was wrong.

When Mr Elt went upstairs to the room, he discovered the sheets and the mattress protector were covered in blood and excrement – and were completely ruined.

It was only when they logged onto Booking.com that the pair saw a message from the woman to say she had been ill overnight and was too ashamed of the mess she had made to face the pair.

However, when they checked the CCTV cameras from the night before, they discovered that she had gotten into a drunken argument with her partner in the car park, pushing him away before he had to carry her up to the room in the early hours of the morning.

The messy bed sheets left behind by one of the guests (Image: MEN)

Mr Elt said: “We were getting ready for breakfast, we thought every couple was lovely, and this couple walked past with their luggage so we though they must be putting it in the car and then coming in for breakfast but when I turned back again the car was gone.

“I went upstairs and there it was, the blood and the excrement.

“Everything, all the sheets, the mattress protector, the duvet cover, the dressing gown, they were all bunched up at the side.

“We tried cleaning them but they just wouldn’t come out.

“We went onto Booking.com and there was a message that said ‘I’m not coming to breakfast I was a little ill last night I was too embarrassed’ but it was self-inflicted.

“We looked at the cameras and she couldn’t even stand up, she’d had too much to drink.

“She pushed her boyfriend away, he was pushing her against the car, and he sort of carried her in by her elbows and went out at about 3am for about an hour and a half before he came back and parked up.

“If she’d have come downstairs and said ‘look I’ve had a really bad night and this has happened I’m so sorry I’ll pay for it’ that would’ve been fine.

“We’ve had other people in before who’ve done similar things.

“There are plenty of places in Blackpool where that sort of thing happens all the time, we’re quite lucky in the fact that we’re 5* gold so it doesn’t happen too often, I’m not saying it won’t happen again, it’s only the minority that ruin it for the majority.

“If someone does something I think they should own up to it.”

The pair claims it is not the first time that one of the rooms has been ruined by guests, with several other horror stories from nightmare guests.

They say one couple checked out of their room in shame, with the woman refusing to look at the owners, and when the pair went upstairs they discovered cigarettes littering the sofa, and the radiator had been pulled off the wall from where the couple had tried to stand on it to smoke out of the window.

The white leather sofa had also been dyed blue in some places, as had the toilet seat, with similar blue stains in the bath, leaving Mr Elt believing the woman must have been sitting in the bath in her jeans.

The pair charged the couple for the damage caused, and the woman cheekily left a terrible review on Booking.com, stating she “hated” the site, keeping them from reaching their perfect 10 score for over a year.

Another couple destroyed the room in a drunken state one new year, destroying the sink and a glass shelf below it, but had the decency to contact them to let them know.

The pair went upstairs to help repair the room as best as they could at 2.30am, with the guests then telling them that they had called an ambulance for the man, as he had been coughing up blood and his partner believed he had had a spiked drink. He was taken to hospital before being brought back to the B&B at around 6am.

The next morning, the man came downstairs and apologised profusely, and that he had been really enjoying his stay, so much that he had wanted to return to the site.

Mr Elt said if he could promise he would not repeat his behaviour, he would be welcome back, but they have not seen him since.

Several stories have been posted online by Mr Elt to show people what the pair face, and to help guests understand what they expect.

Although their rules have not been popular with everyone, with one woman even calling to say it was “disgusting” that they felt able to share their guest’s stories – even though each tale is told with no identifying information like names or dates, the pair feel like they help to protect their home, whilst also helping other guests have a comfortable stay without disruption.

The pair are willing to go the extra mile to help their guests – even taking one couple to go and pick up their car earlier this week – often amending their offerings to suit the guests, with later meals, check-out times, and even doing people’s washing.

However, in return they expect guests to respect the property, and the other guests.

Mr Elt added: “It sort of deters people from thinking they can just get away with anything.

“There isn’t any naming and shaming because I don’t believe in doing that.

“I have far more sympathy to people that will own up to something and say ‘I’m so sorry’ but when you get people who come in and expect things.

“We had one woman who dropped her hot chocolate all over the floor and it’d soaked the carpet but instead of letting us know she’d tried to mop it up with a white towel and she was scrubbing the floor so the towel was ruined.

“It makes you distrust other people, it is the minority that spoil it for the rest.

“We want our guests to feel at home, we want them to feel comfortable and have an enjoyable stay but we need to get that back too. We need respect.

“We’re quite lucky that we’ve only have a few incidents over the last seven years.

“We still get some people who will just be, I don’t know if it’s just selfish, but they think they can use the place as they want and they don’t care.

“We stress that this is our home, it’s a B&B it’s not a hotel, it’s our home with the rooms to let.

“A hotel probably has a 24-hour reception and really you’re just a number.

“It’s ‘there’s your keys’ and the following morning it’s a totally different person there, with a B&B it’s a personal touch.”