Florida officials have reported the state’s first case of monkeypox in a child under four years old – the seventh in the nation overall – as fears the virus will spread into more vulnerable groups continue to grow.

Martin County, around 100 miles north of Miami along the Sunshine state’s east coast, reported the case in an unnamed child on Monday. The case occurred within the past week. The child’s current condition and the severity of the case is unknown.

The Centers for Disease Control and Prevention warns that children under the age of eight are among the most vulnerable to severe complications or death from monkeypox.

It is the first case among this age group found in Florida. One was reported by officials in Maine on Friday, while others were confirmed in California, Indiana and in a non-resident traveling through Washington D.C.

While cases so far are mostly concentrated among gay and bisexual men in the nation’s monkeypox outbreak, anyone is vulnerable to infection. The virus spreads via physical touch with an infected person making any close contact a potential transmission event.

America’s monkeypox outbreak has spiraled in recent weeks. The U.S. has recorded 11,890 confirmed infections, the most of any country in the world, including 713 on Monday. More than half of cases have been logged in August alone. No deaths in the U.S. have been tied to the virus. 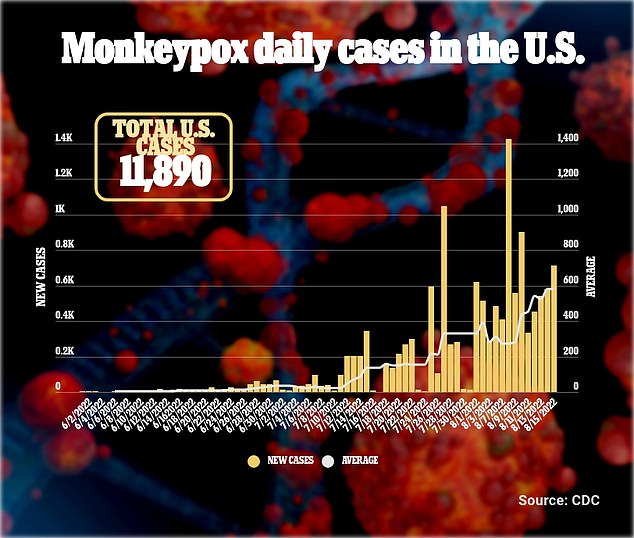 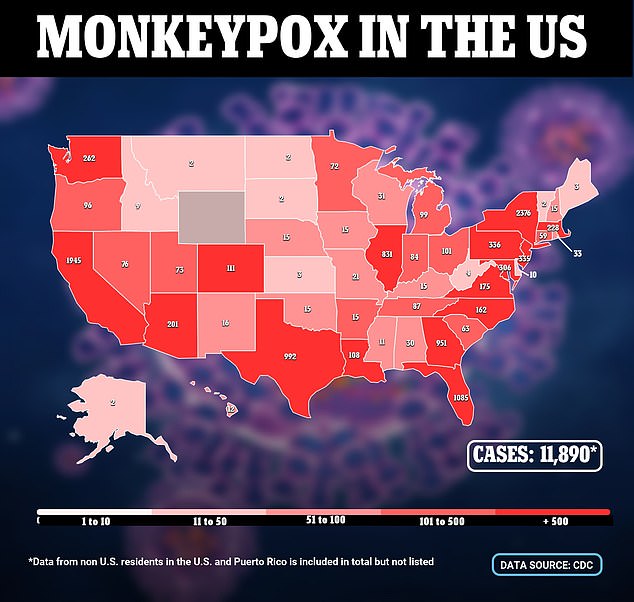 How the Florida child contracted the virus, and the symptoms they may have experienced is currently unknown to the public.

With the rampant spread of the virus in recent weeks it is likely that more cases in young children will likely be found.

Florida is one of the leading states in confirmed monkeypox infections, having recorded 1,085 as of Monday afternoon.

Confirmed infections in the Sunshine state spiked last week, increasing from 633 on Monday, August 8 to reaching the four figure mark by Wednesday, August 17.

Only two other states have recorded more than 1,000 confirmed cases. New York alone makes up more than one-fifth of the nation’s outbreak, having logged 2,376 infections so far.

California has recorded 1,945 cases so far as well. Texas will likely join the dubious group this week, as the Longhorn state sits at 992 cases as of Monday afternoon.

Many officials fear that these numbers will only continue to increase as the outbreak spirals out-of-control, and potentially into the next pandemic.

Dr Joseph Eisenberg, a epidemiologist at the University of Michigan in Ann Arbor, said in an interview last week that he believes the erupting virus will become the next pandemic in the US, but not reach the same heights as COVID-19.

‘Monkeypox is the next pandemic,’ he said.

‘It is spreading globally through several countries, including the US In the US, cases are rapidly increasing into the thousands.

‘It’s a different kind of pandemic than what we see in Covid, however, because it is much less infectious and it is currently affecting a specific risk group that involves very close, intimate contact. And so, yes, it’s a pandemic, but it’s not anything like the Covid pandemic.’ 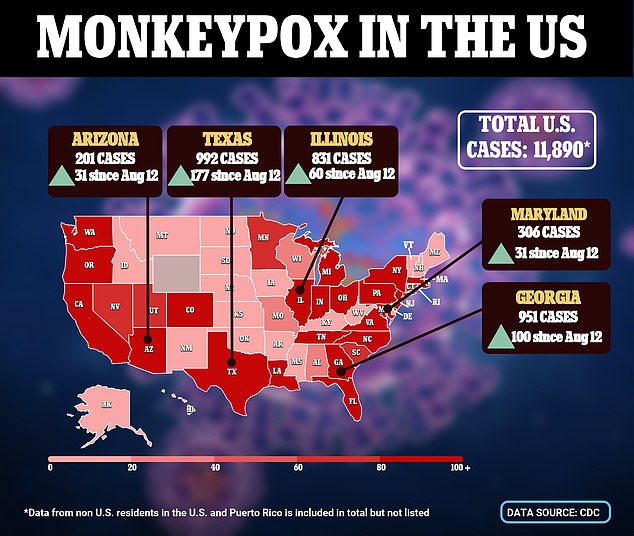 Not all agree the situation is this serious, though. Dr Andrew Brouwer, an assistant research scientist at Michigan’s School of Public Health, pushed back in the same interview.

‘The COVID-19 pandemic has sensitized us to disease transmission. Other outbreaks… received much less attention,’ he said.

‘That is not to say that we should let the MPV and other outbreaks fly under the radar, but we should have some perspective that outbreaks of various diseases happen all the time and not all are existential threats.’

Brouwer does think the increased attention on the virus is helping fight it, though, making the average more aware of its spread and how to spot a potential case.

Officials seem to have been caught off-guard by this outbreak, though, leading to an initial shortage of tests and lacking supply of vaccines that still is hampering the response.

When jabs have become available in major population centers like New York City, appointments have been filled within minutes due to the exceedingly high demand.

In order to quell the shortage of the Jynneos monkeypox vaccine, federal officials are planning on delivering doses of the vaccine that are only 0.1 milliliter (ml) – a massive drop from the standard 0.5 ml dose.

They believe that using an intradermal injection – which delivers the vaccine between the layers of the skin instead of underneath the skin’s fat – will make sure the shot is just as effective.

But there are some questions as to whether this is the right move.

In 2015, researchers gathered that smallpox vaccines were just as effective when delivered in smaller doses if the injection was performed intradermally.

It was just one study performed on 524 participants, though, and using a different vaccine.

Paul Chaplin, CEO of Jynneos’ manufacturer Bavarian Nordic, published an open letter to Dr Xavier Becerra, secretary of the Department of Health and Human Services and Dr Robert Califf, commissioner of the Food and Drug Administration expressing concerns about the lack of data supporting the plan.

The Danish pharma giant is asking for more trials to be performed on the effectiveness of the smaller doses before the nation overhauls its vaccine strategy.

Currently, shots are mainly reserved for men who have sex with other men – though some exposed people have been granted the shot as a precaution.

Vegetarians are more likely to suffer from depression, study claims

The man 'allergic to food and wine': American, 36, broke out in rashes and fell every time he ate