Flu, RSV outbreak cause drug shortages: Experts slam US for not stockpiling

Experts today slammed the US Government for failing to stock up on key flu drugs and antibiotics during the pandemic — despite warnings that a whirlwind of seasonal illness would return with a vengeance post-lockdown.

America is running out of five essential medicines, including the frontline child antibiotic amoxicillin and Tamiflu, as a wave of flu, respiratory syncytial virus (RSV) and other cold viruses overwhelm pediatric hospitals.

Covid lockdowns, mask mandates and the virus itself sidelined most seasonal infections for more than two years, robbing people of vital exposure to germs that strengthen the immune system.

Experts have been warning since 2020 that these viruses would return and cause more severe effects in a population with weakened immunity.

Yet there were no efforts to stock up on medicines. The Biden administration signed off on nearly $5billion of bivalent Covid vaccines back in July, even though Covid rates were flat at this time while southern hemisphere countries — normally a precursor for what will happen in the US — suffered a major flu outbreak.

More than 82million Covid vaccines have already been wasted in the US — costing millions to the country — after they expired on shelves before being used.

Dr Stuart Fischer, an emergency care physician in New York, told DailyMail.com: ‘Needless to say, a good supply [of medicines] was needed for this winter, but our Government doesn’t believe in planning ahead.’

He added: ‘You could say we are obsessed with Covid in the US, while every other illness is being pushed to the side.’

Dr Scott Roberts, an infectious diseases expert at Yale University, said: ‘We should have stockpiled ahead, especially for bread and butter antibiotics for pneumonia [such as amoxicillin].’

And Dr William Hanage, an epidemiologist at Harvard University, added to DailyMail.com: ‘The sorts of second order shortages you describe have been a recurring theme.

‘Back in 2020 it was tests, or even swabs that ran low. Then masks. Now we are seeing this. It is certainly true that we could expect a need for antibiotics.’

Defending the supply issues yesterday, the White House’s Covid co-ordinator Dr Ashish Jha told a briefing there were ‘often’ antibiotic shortages at this time of year. ‘We still have a good amount of Covid,’ he added, ‘the single-most important thing people need to do is go get vaccinated.’ 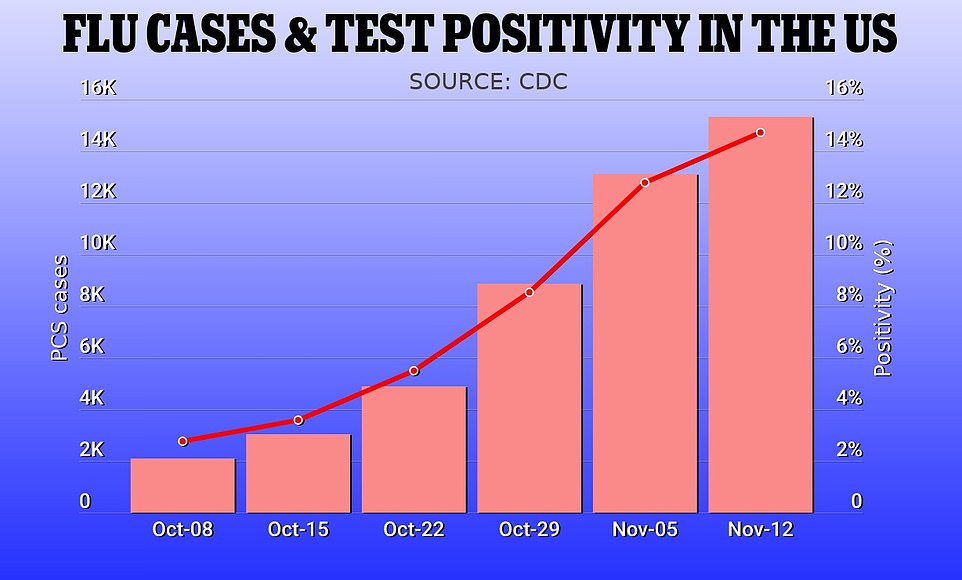 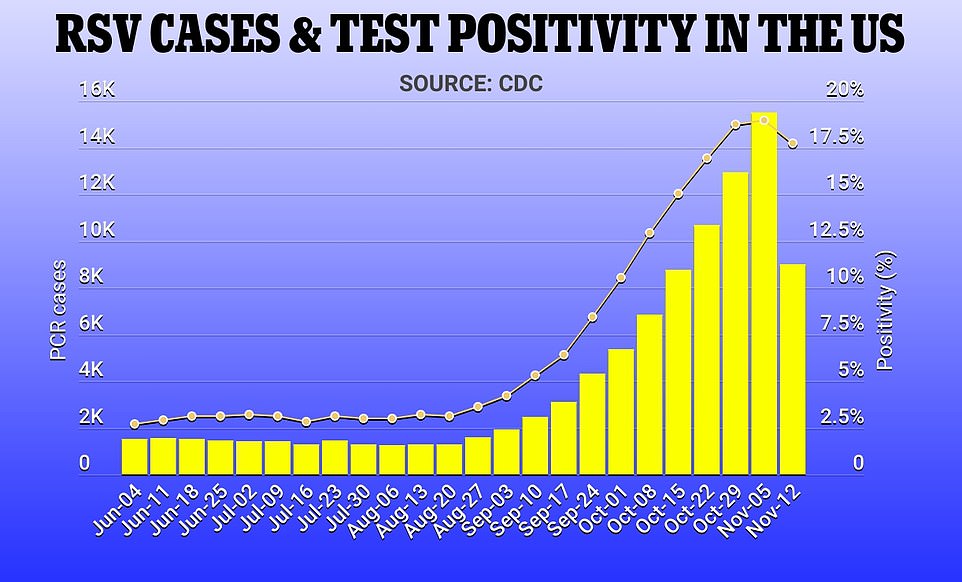 This graph shows test positivity and RSV cases in the United States this year. In some areas, these cases are continuing to surge 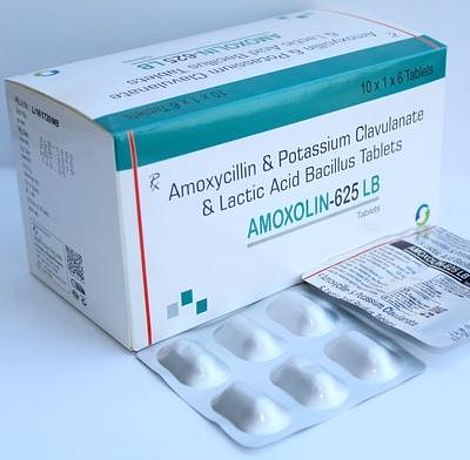 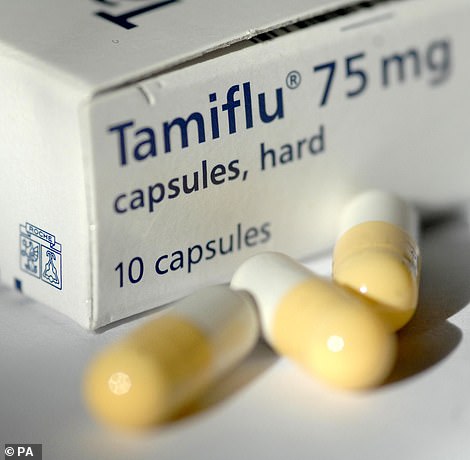 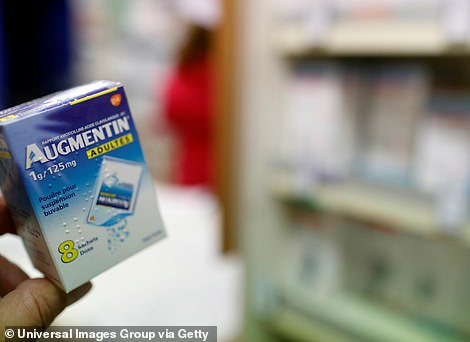 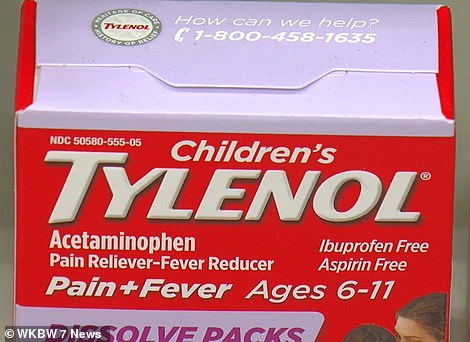 Augmentin and Tylenol shortages are also being faced

Where did the flu go the past two years…

The flu’s spread was massively curbed over the first two years of the Covid pandemic.

Viral interference from Covid — which stopped other viruses spreading — combined with mitigation measures like masking and restrictions on indoor events led to little spread of the virus.

As a result, immunity waned in many individuals because a lack of infections meant it was not re-booted.

And the youngest children never built up immunity to seasonal menaces because they were not exposed to good germs.

This led many experts to warn seasonal viruses could return with a vengeance this year.

There were early warning signs in Australia and New Zealand — a ‘bell weather’ for outbreaks in the US — who both faced record-breaking flu seasons.

There pediatric hospitals also faced a surge of admissions, like the US at present.

Dr Anthony Fauci, the nation’s top infectious disease expert, issued a warning about the rampant spread of the flu in the Southern Hemisphere.

Some 14 states — mostly in the south — are already facing very high levels of flu despite it still being early in the season.

But uptake has been slow with about one in ten Americans who are eligible — 35million people — coming forward for the shots.

Yesterday the White House unveiled a $400million plan to fund advertising the shots in an effort to boost uptake.

But RSV and flu cases have already surged weeks ahead of schedule and hit a record high.

A total of 4.4million Americans have already been sicked by flu this year, while there have been 38,000 hospitalizations and 2,100 deaths, the Centers for Disease Control and Prevention (CDC) estimates.

Hospitalization rates for the flu are at their highest level in more than a decade for this time of year — with 8.1 admissions per 100,000 people.

Some 14 states — mostly in the south — are also already facing ‘very high’ levels of flu this year.

Many pediatric hospitals in the country are already at or over capacity, before the worst months of the flu season arrive.

Pediatric wards in Texas and California are now handling so many patients that they have had to erect tents to house some of their patients.

Dr Roberts, who works on the wards at Yale New Haven Hospital, said their unit was already at full capacity with doctors being called in to help from other wards.

‘Right now we are doing ok at capacity,’ he said, ‘but if it gets worse we need to brain-storm what to do.’

Asked whether the surge in respiratory viruses should have been prepared for, he said: ‘Anyone would have predicted that coming out of lockdowns we would have seen increases in Covid and RSV.

‘Whatever tools we have, I think we should have stockpiled more of that to help with this crisis.’

Asked about the shortages, Dr Fischer added: ‘Considering the top billing Covid vaccines and antivirals have had, have we forgotten the more prevalent illnesses of winter?

‘This is a very bad reflection on the US healthcare system.

‘They go nuts about a Covid virus and a vaccine that remains controversial, but they ignore the flu that has been with us for a hundred years.’ 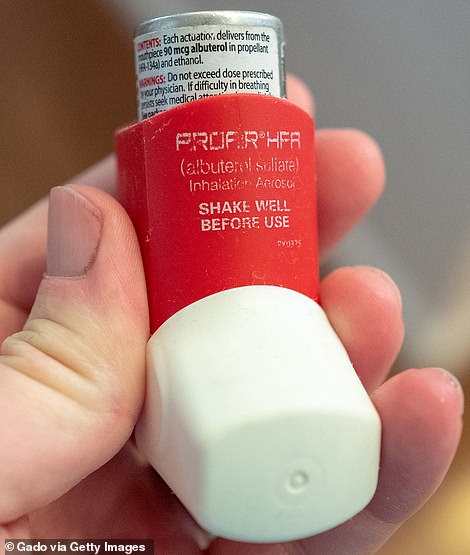 There is also a shortage of the inhaler Albuterol (shown)

The US, UK and other nations in the northern hemisphere look to their counterparts in the south when planning ahead for their flu seasons at countries including Australia.

But in an early warning of what was to come the nation suffered an unusually early outbreak that saw a record number of flu infections.

Children’s hospitals in the country also faced surging admissions — in a warning to the US — forcing some to divert resources away from other care.

Experts warned at the time that this should sound alarms in nations in the White House, No10 and for other Governments.

Professor Lawrence Young, a virologist at Warwick University in the UK, told DailyMail.com back in June: ‘Australia really is the “canary in the coalmine” and we should sit up and take notice.

‘There is a real concern the UK [and US] could be faced with a “perfect storm” of respiratory virus infections this coming winter.’

The warning was not heeded, however, with the US not moving to stockpile drugs to treat common respiratory illnesses.

Health officials have declared a shortage of amoxicillin, a vital antibiotic used to treat bacterial infections such as pneumonia, respiratory infections and strep throat.

But doctors on the ground are already reporting dwindling stocks of Augmentin — an antibiotic that uses amoxicillin alongside clavulanic acid —, Tamiflu — the most commonly used flu medication in US hospitals —, and albuterol — an inhaler for asthma to relieve other lung symptoms.

Horror flu season in Australia warning to US: So why was it ignored?

Concerns were raised about a major flu outbreak this winter in the US back in June as the virus wreaked havoc in Australia.

Experts have been warning about the potential of an influenza surge throughout the pandemic, with lockdown thought to have weakened people’s immune systems.

Southern hemisphere countries like Australia are seen as the ‘canary in the coalmine’ because they have their winters earlier in the year.

Australia suffered a record 65,000 flu cases in May, more than double the previous May record of 30,000 in 2019, with diagnoses up almost 300 times than last year in parts of the country.

Children’s hospitals have also seen spikes in paediatric admissions that have forced some to divert ‘less urgent cases’ to other healthcare providers.

Professor Lawrence Young, a virologist at Warwick University, told MailOnline ‘there is a real concern the UK could be faced with a “perfect storm” of respiratory virus infections this coming winter’.

‘Australia really is the “canary in the coalmine” and we should sit up and take notice.’

States facing a shortage of Tamiflu include Oklahome, where pharmacist Dr Renae Kraft says both generic and brand name versions of the drug are in short supply in her area.

She said her rural pharmacy had 20 people come in with prescriptions for the drug, with her having to say they had none available and refer them to a local Walmart.

The Food and Drug Administration (FDA) warned in October that amoxicillin was in low supply, pointing to the surge of flu and RSV cases as the culprit. As a result, Augmentin — which contains amoxicillin — has also become hard to obtain.

Antibiotic drugs are often used to fight bacterial infections that come as a result of the flu rather than the disease itself. Children are at risk of suffering severe infections from bacteria after they recover from an illness.

Pharmacists in multiple US cities also say they are running low on Tylenol, which is used to quell fevers in youngsters. The drug is already in shortage in Canada.

Asked  about stockpiles of medicines for common respiratory viruses in the US, Dr Jha said yesterday: ‘What I would say is we often see shortages of individual antibiotics.

The US does have a stockpile of antibiotics and antivirals like Tamiflu in its Strategic National Stockpile which are available for emergencies only.

But FDA reports suggest hat many of the Tamiflu doses in the stockpile have already reached the end of their ten-year shelf-life, although the Food and Drug Administration says they can still be used in emergencies.

It is not clear whether the stockpile also holds amoxicillin doses. The Department of Health and Human Services did not respond to a DailyMail.com request for comment.

Few other countries have stockpiled antibiotics and antivirals ahead of this year’s flu season.

Australia did start storing the drugs in 2020 amid fears of supply disruptions from China. But in the 2022 flu season it was still left struggling against a shortage.

Breast and lung cancer screening down by up to 25% two years into pandemic, study warns