Lists of popular investment funds, published by the country’s biggest investment platforms, are powerful sales tools that many investors use to build their portfolios around. But an investigation by The Mail on Sunday reveals that investors who bought funds from these lists a year ago would now be nursing heavy losses.

Some of the favourite investments this time last year included Scottish Mortgage (down 49 per cent); Baillie Gifford American (down 52 per cent); and Polar Capital Global Technology (down 30 per cent).

Investors who bought favoured shares a year ago are likely to have fared no better. Among the most popular shares purchased this time last year were Boohoo (now down 77 per cent); Asos (down 75 per cent); and The Hut Group (down 61 per cent). 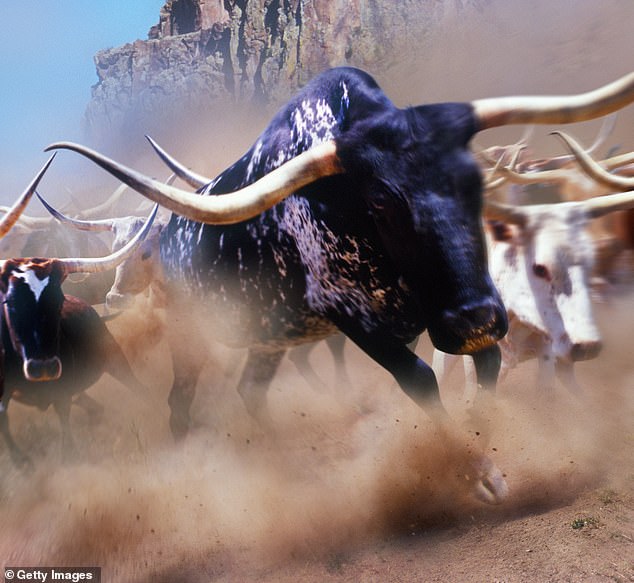 Following the herd: Lists of popular investment funds, published by the biggest investment platforms, are powerful sales tools that many investors use to build their portfolios around

To put these figures into context, the FTSE All-Share Index is down by less than 2 per cent over the same period.

These are different to the best-buy fund lists that platforms also compile, based on their own investment research.

The popular fund lists are used by investors to help generate ideas and inspiration for their own portfolios. But experts warn that taking heed of them – even worse, depending on them – can cost investors dearly.

‘But, ultimately, they encourage customers to invest. It’s similar to the most bought items list you might see on a retail website – for example, the likes of Amazon.’

He adds: ‘On the one hand, they can help generate investment ideas for investors looking to put money in the market. On the other, there are pitfalls because of the factors that influence the funds that appear on these lists.’

The Mail on Sunday looked at the most popular fund purchases across the UK’s largest investment platforms. Had an investor spread £500 across the top five funds on each platform a year ago, their original investment would now be worth £412 with AJ Bell; £443 with Interactive Investor; £433 with Fidelity; and £468 with Hargreaves Lansdown.

Stock markets are down over this period, but some of the falls in fund prices are dramatic.

Of the top-five most popular funds across the four platforms, just one is worth more than this time last year – Guinness Global Energy (up 49 per cent).

Among the top share picks, just three of the companies’ share prices are up: BP (41 per cent), HSBC (10 per cent) and Rio Tinto (11 per cent). The figures are just a snapshot and there will inevitably be time periods when the most popular funds do outperform. Performance also cannot be judged solely by one-year results. Nonetheless, one-year falls of this magnitude could take years to recoup.

Lists look back… not forwards

Holly Mackay, of investment website BoringMoney, warns that the biggest problem with choosing to buy from bestseller lists is that investors are making decisions about what to buy today based on what people have bought in the past. She adds that investors tend to jump on bandwagons and invest in funds that are doing well. When stock markets are steadily rising, such a strategy can work well. But not when markets turn for the worse or during the types of volatile conditions we are seeing now.

Mackay says: ‘If markets are heading steadily up, these lists can help identify some good funds because they are unlikely to change much from one month to the next.

‘Yet, if markets are volatile and the future unclear, I think a rearview mirror doesn’t provide the comfort that our brains derive from the sense of being amongst the herd. In such conditions, I’d ignore them.’

Interestingly, there is little overlap between the most popular investments on the four biggest platforms. This could be explained by the differences between the customers of each platform.

It may also reflect which funds each platform is promoting at any time. The platform’s choice of funds to promote may not be the best for all individual investors.

Investors have a habit of buying funds and companies that have seen recent growth and are therefore more expensive than in the past.

They are less likely to seek out funds that are out of fashion and undervalued. Therefore investors who decide to follow suit and buy the previous month’s top picks are likely to buy at higher prices. Mackay points to investment trust Scottish Mortgage. It was a muchloved pick last year, but is nowhere to be seen in bestseller lists today.

‘Investors can pick up this trust for a price 49 per cent less than they could do a year ago,’ she says. ‘So arguably this is a much better time to buy it.’ 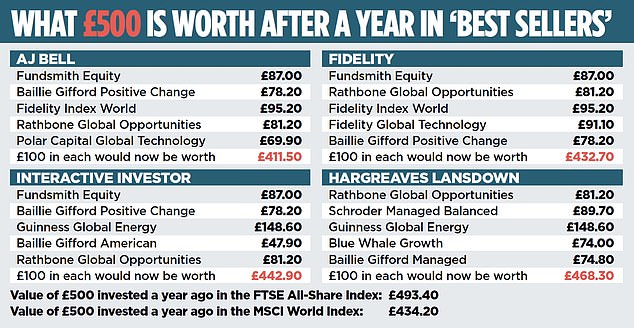 Fahy warns that star managers tend to be popular among investors. Fundsmith Equity, run by renowned fund manager Terry Smith, was the most popular fund choice on the platforms of AJ Bell, Fidelity and Interactive Investor a year ago.

The fund is up 25 per cent over three years, although down 13 per cent over the past 12 months. Sometimes, following a popular manager can be profitable – but not always.

Fahy says: ‘Don’t forget, Neil Woodford’s ill-fated Woodford Equity Income fund would have featured heavily in these lists and some investors lost a big chunk of their life savings when it was broken up.’

So, should you just ignore them?

DIY investors have access to thousands of funds, investment trusts and shares – all at the click of a button. This level of choice can be daunting even for the most confident and experienced, so it is understandable that investors look for simple ways to whittle down their choices.

Bestseller lists are one tool that investors can turn to, alongside lists issued by investment platforms of their own recommended funds.

Some platforms also publish suggested model portfolios of funds to suit different types of investor. However, while all these tools can offer ideas, there is really no substitute for doing your own research to ensure that you are buying the best funds for you.

‘Fear-of-missing-out will attract some people to scan the lists of most bought funds,’ he says. ‘Options that catch the eye can be cross-referenced with best-buy lists to check how they are viewed by professional fund selectors.

‘That’s not a terrible way to cut down the overwhelming choice that most amateur investors find a nightmare to deal with.’

Fahy adds that if you are going to look at the bestseller lists, at least look at those across a number of platforms – rather than sticking to your own.