Forget Biden! Liz Truss told to 'relax' as US trade deal would be hellishly controversial

US House of Representatives Speaker Nancy Pelosi told Britain there could be no US-UK trade deal if the Government proceeds with plans to unilaterally scrap some of the rules governing trade with Northern Ireland. London warned the European Union this week it could axe post-Brexit regulations negotiated with Brussels, including border checks on some goods shipped from mainland Britain to Northern Ireland.

The Northern Ireland Protocol prevents the need for a hard border on the island of Ireland by moving border checks on British goods to the Irish Sea rather than along the frontier with Ireland, which is in the EU.

Ms Pelosi said in her statement: “If the United Kingdom chooses to undermine the Good Friday accords, the Congress cannot and will not support a bilateral free trade agreement.”

Lord Daniel Moylan tweeted in response: “Trade ‘deals’ add very little to mutual prosperity and a US/UK trade deal would be hellishly controversial domestically. We can relax in the face of any threats that the USA won’t give us one.”

His comment comes after Conor Burns, a Northern Ireland minister and Boris Johnson’s special Brexit envoy to the US, told The Telegraph: “We seek an ambitious [free trade agreement] with the US. But there can be no connection between that and doing the right thing for Northern Ireland. None.” 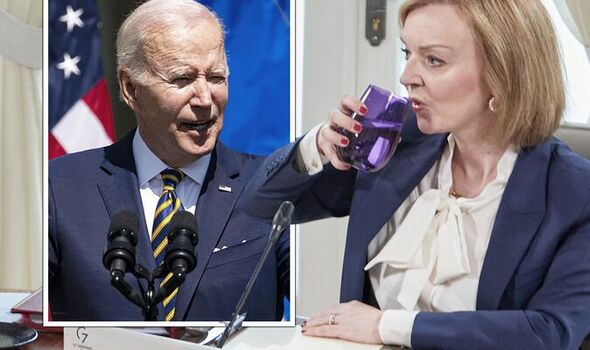 British and US trade officials are due to meet in Boston in June for a third round of talks on strengthening trade ties.

London and Washington entered into formal negotiations over a bilateral trade deal under the former Trump administration.

However, President Joe Biden’s government shelved those talks to focus more on specific challenges such as labour rights, supply chains and the transition to a low-carbon economy.

READ MORE ABOUT BORIS JOHNSON AND THE SUE GRAY REPORT

But Ms Tai appeared to pour cold water on the prospect of a Free Trade Agreement, telling a press conference in March that such a deal was a “very 20th century tool”.

Dr Peter Holmes, a fellow at the University of Sussex’s UK Trade Policy Observatory, told Express.co.uk in April: “The US is not very interested in free trade agreements.

“The British Government is not the natural partner of a Biden administration. Biden does not feel opening US markets to British exports is the top priority for trade policy.

A timeline of Brexit (Image: Express)

Political and economics commentator Robert Kimbell said in a tweet: “The United Kingdom is a sovereign nation state comprising four nations and our country has a Single Market with a single currency, common language, and a single business culture.

“It is not a colony of the United States, which needs to butt out of our internal affairs.”

John Longworth, a former Tory MEP who chairs the Independent Business Network, in a tweet directed at Ms Pelosi, said: “The EU is undermining the Good Friday Agreement, not the UK.

“You are positioning the US as the enemy of the UK. Be careful what you wish for.”

Foreign Secretary Liz Truss is set to meet with top Democrat Richard Neal on Saturday to discuss the situation over Northern Ireland, which some say could spark a trade war between Britain and the EU.

The ongoing row over the protocol has created an impasse in efforts to form a devolved government administration in Belfast as the DUP refuses to join an executive unless its concerns are addressed.

Mr Neal told The Guardian part of his job is to convince the UK not to breach the Brexit treaty.

He said: “They haven’t breached it yet. They’re talking about breaching it, so part of my job is to convince them not to breach it.

“I want to remind everybody in the UK, in Northern Ireland that it should not be treated as a cavalier achievement.”