Claiming that French and German companies and households increasingly believe prices will continue to soar, the prospect of an extended period of uncomfortably high inflation is on the rise, the bosses of the Banque de France and Bundesbank have warned as they shared the “bad news” unveiled in new research conducted by the two banks.

But why does it matter what companies think? Because businesses’ expectations drive their decisions, and when firms expect inflation to stay higher for longer they are more likely to raise prices.

Workers, meanwhile, are more likely to demand higher pay to make up for their loss of purchasing power.

This risks creating a 1970s-style wage-price spiral that keeps inflation high, pushing prices in the shops even further up.

He told the BBC: “There isn’t an automaticity between inflation and pay settlements and we need to be very careful to avoid fuelling an inflationary spiral in a way which actually is to everyone’s detriment if we allow it to run away from us.

“That is what the governments of the 1970s failed to address.” 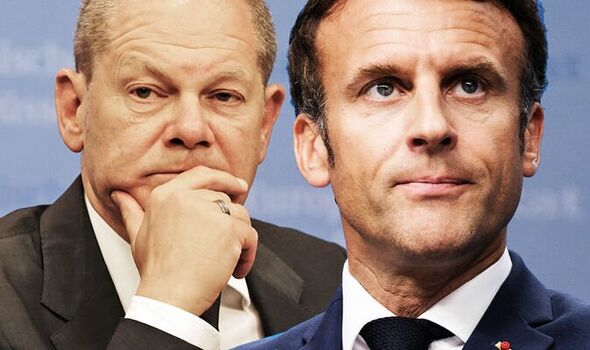 Mr Clarke added: “If we end up in a world where we are saying all settlements try to match inflation or even exceed it then we are in a position where we are actually creating the conditions whereby those expectations become baked in, become self-fulfilling.”

His intervention came after the Bank of England stated inflation is set to hit 11 percent in the fall as it raised interest rates to 1.25 percent – the fifth successive hike.

Inflation in the eurozone is now 8.1 percent – the highest since the introduction of the single currency and more than four times the ECB’s two percent target.

The increase in inflation expectations in the eurozone’s two largest economies is a problem for rate-setters at the European Central Bank (ECB) because it makes their efforts to bring price growth back down to that 2 percent target even more so difficult.

German households, hit hard by food and energy price jumps as a result of Russia’s war on Ukraine, now expect inflation in the country to average 5.3 percent over the next five years, according to a Bundesbank study.

German businesses expect inflation to average 4.7 percent over the next five years, up from 3.4 percent at the start of the year.

Joachim Nagel, the Bundesbank’s president since January, said at a joint conference with the Banque de France the data was “worrying” as it suggested expectations of future inflation were becoming “less anchored”.

He also said the survey highlighted the risk of the ECB reacting to soaring prices “too little, too late”.

French business leaders expect inflation in France to hit five percent in a year from now, up from a forecast of three percent at the end of last year, data from a poll published by the Banque de France showed.

According to the ECB, inflation expectations rising above its target and wages rising faster than expected are two of the upside risks for price growth after.

It said so after announcing, two weeks ago, its plans to raise interest rates next month for the first time since 2011.

Banque de France governor Villeroy de Galhau said he hoped the ECB’s plan would lower inflation expectations and clarified he disagreed with the bank’s aim of raising rates “gradually”, arguing he would rather opt for the term “orderly”.

The Ukraine crisis and the surge in energy prices have made for a tough and uncertain outlook for European central banks.

Some 12 EU members have so far been affected by Russian gas supply cuts, and while governments’ key concern is naturally to keep its people warm in the coming winter, the numbers matter too.

“All this is part of Russia’s strategy to undermine our unity.

“So the risk of full gas disruption is now more real than ever before.”

On Friday, one EU leader warned “cheap energy is gone”.

Latvian Prime Minister Krisjanis Karins said: “The notion of cheap energy is gone and the notion of Russian energy is essentially gone and we are all in the process of securing alternate sources.”

European Council chief Charles Michel, meanwhile, bluntly told a news conference at the closure of the bloc’s two-day summit in Brussels: “Inflation is a major concern for all of us.

“Russia’s war of aggression is pushing up the price of food, energy and commodities.”