France has revealed plans to drop its requirement for vaccinated travellers from Britain and America to show proof of a negative Covid test on arrival.

Speaking on Tuesday, Minister for European affairs Clement Beaune did not specify an exact date that the new rules will come into force, but said they would announce the change in the ‘coming days’.

Under current rules, anyone travelling to France from outside the EU, including Britain, has to show a negative Covid test result from the previous 48 hours, regardless of vaccination status.

Beaune said the country is preparing to drop tests for vaccinated travellers outside the European Union, which were reintroduced in response to Omicron, as infection numbers continue to fall. 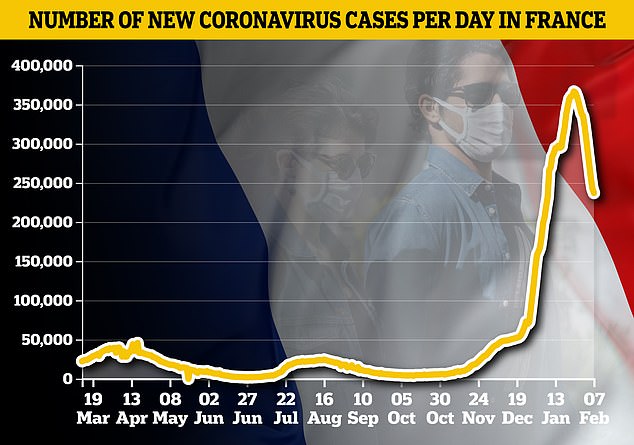 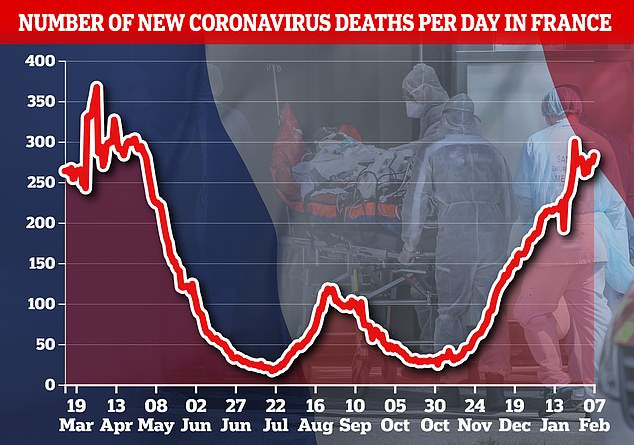 France recorded 46,001 Covid cases on Monday, a sharp drop from the record of just under 465,000 infections in mid-January

He told France 2 television: ‘We again required tests in December over the Omicron variant.

‘In the coming days we will announce that tests are no longer needed for vaccinated people.’

WHAT ARE THE CURRENT COVID TRAVEL RULES?

Under the current rules, anyone travelling to France from outside the EU, including Britain, has to show a negative Covid test result from the previous 48 hours, regardless of vaccination status.

Travellers also have to complete a ‘sworn statement’ form certifying that they are not suffering from any symptoms associated with Covid-19 or have been in contact with anyone who has the virus in the previous fortnight.

France recently banned travellers if they were double-jabbed nine months ago or more.

From February 1, travellers from countries within the EU will only need to show their ‘Green Pass’ on arrival in Italy.

For travellers from the UK and America, passengers must fill out a passenger locator form prior to travelling.

Regardless of vaccination status, travellers may be subject to random Covid testing on arrival.

All travellers from the UK must complete a health control form and show proof of documentation on arrival.

Passengers must also show valid proof of vaccination at least 14 days prior to arrival in Spain. The UK’s Covid-19 recovery record does not count.

Fully vaccinated travellers no longer need to undergo Covid testing on arrival or show proof of a test.

Spain is set to reject EU plans for unvaccinated people or those with only one dose to be allowed to travel provided they recovered from Covid within the past 180 days.

If fully vaccinated, passengers can enter Switzerland without having to get a negative Covid test.

Vaccinated UK travellers must show proof of vaccination on arrival and must have had their final vaccine dose 270 days prior to travel.

Travellers who are not vaccinated are not permitted to enter Switzerland.

UK travellers can enter Germany if they are fully vaccinated and must possess proof of vaccination to show on arrival.

Fully vaccinated passengers do not need to have a negative Covid test.

Travellers who are not fully vaccinated may only enter Germany from the UK if they are a German citizen, the spouse or child under 18 of German citizen, serve an important role or have an urgent need to travel.

Permitted unvaccinated travellers must show proof of a negative PCR test that is no more than 48 hours old, and will also have to quarantine for ten days.

EU members agreed on January 25 to better coordinate their travel rules, in particular for people crossing borders within the bloc.

‘This week there will probably be a new European protocol for vaccinated people arriving from outside the EU, with eased measures,’ Beaune added.

Commenting on the new rules, Paul Charles, CEO of travel consultancy The PC Agency, told MailOnline he welcomed the change ahead of the half-term holidays.

He said: ‘Countries are finally realising that onerous testing measures put off consumers from travelling to that particular country.

‘There has been no justification for France to keep entry tests in place for the fully-vaccinated and the message has finally hit home.

‘This is a welcome change just ahead of half-term and will enable more families to visit France as soon as possible.

‘The fact remains that countries which keep Covid travel rules in place longer than they need to will lose market share as consumers choose more open and liberal countries to visit.’

‘UK tourism businesses have lost almost £180bn in revenue over the last two years and many are in danger of collapse this year unless restrictions of travel are removed as quickly as possible and there is co-ordination between countries so that people are not left confused as to what they need to do before travelling.’

The Omicron surge prompted Italy and Denmark to impose recent negative test requirements and vaccination proof for entry by fellow EU residents, a tightening of the rules that irritated officials in Brussels.

France’s plan comes just days after the country banned travellers from entering if they were double-jabbed nine months ago or more.

Britons wanting to go skiing or on city breaks to Paris for the half-term break will have to get a booster jab if they received their second dose any earlier than May last year.

Without a recent jab, France will effectively treat travellers as unvaccinated and can only enter with a ‘compelling reason’, such as visiting a dying relative.

French authorities began lifting a series of Covid restrictions this month, with nightclubs set to reopen from February 16 and standing areas once again authorised for concerts and sporting events as well as bars.

The country recorded 46,001 Covid cases on Monday, a sharp drop from the record of just under 465,000 infections in mid-January.

Earlier this month, Portugal also it will drop mandatory negative Covid tests for British holidaymakers who have been fully vaccinated.

Air passengers who arrive with a valid digital European Union certificate or recognised proof of vaccination will be exempt from the tests.

It did not say when the decision would take effect, but the rules now in force were meant to last until February 9.

In early January, Portugal eased some Covid curbs allowing students to return to schools and nightclubs to reopen but kept the negative test requirement to all passengers entering the country.

Portugal is one of the world’s most vaccinated nations, with nearly 90 per cent of its people fully inoculated.

Although the infection numbers and incidence are still near record levels, hospitalisations and deaths are well below year-ago peaks.

Elsewhere, Spain is set to reject EU plans that would have made it easier to enter the country.

Under Brussels’ plan, unvaccinated people or those with only one dose would have been allowed to travel provided they recovered from Covid within the past 180 days. 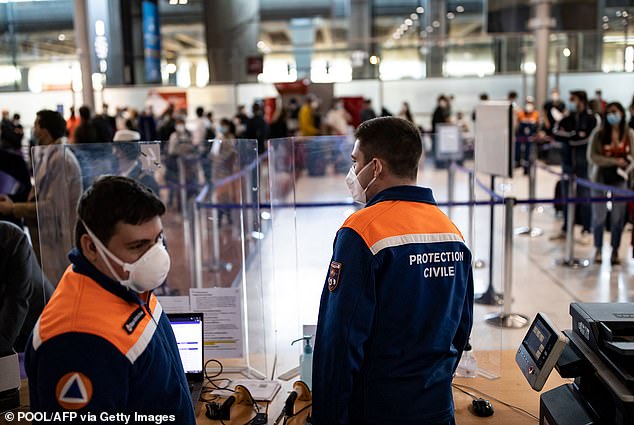 Beaune did not specify an exact date that the new rules will come into force. Pictured: Passengers arrive at the Paris-Charles de Gaulle airport in Roissy in April 2021

But authorities in Madrid are shaping up to reject the rule, meaning anyone over the age of 12 who has not been fully jabbed will be banned from crossing the border.

The rule will hit children the hardest because the NHS only began offering second jabs to over-12s in late December.

Children who were infected with Covid after their first jab are also forced to wait 12 weeks before getting a second.

They must then wait another two weeks after the second jab for it to be valid for travel – meaning some may not be able to get vaccinated in time for the holidays, which begin in a little under two weeks.

Children are now able to use the NHS app to display their vaccination and infection history.

In signs that the global recovery from Covid is far from over, two of London’s main budget airlines recently revealed that the number of passengers they carried dropped in January.

Even when compared to Omicron-hit December, the airlines said that they lost 2.7 million passengers between them.

Ryanair was the worst hit in January when compared to the month before. The number of passengers that it carried dropped 26 per cent – from 9.5 million to just seven million.

Governments put restrictions on international travel early on in a bid to slow the spread of the virus across borders. 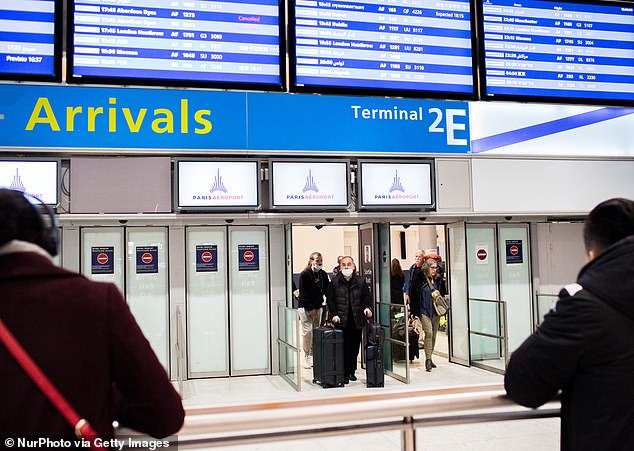 Under current rules, anyone travelling to France from outside the EU has to show a negative Covid test result from the previous 48 hours, regardless of vaccination status (file image)

But investors are now hoping that the airlines can move beyond Covid.

The share price of both companies has recovered and is now trading at around, or above, its pre-pandemic level.

But the figures also showed Wizz Air had more than quadrupled the number of passengers it carried compared to January 2021 – but it is still lagging behind its figures from a year before that.

Ryanair showed an even larger jump, increasing its passenger numbers more than fivefold.

In the UK, fully vaccinated arrivals in the UK will no longer need to take a coronavirus test February 11.

The requirement for those not in that category to self-isolate will also be dropped.

Grant Shapps also confirmed that 12 to 15-year-olds in England will be able to prove their vaccination status via the digital NHS pass for international outbound travel.

It means children will be able to show their infection history on the NHS app when entering EU countries.

What pandemic? Isolated British island that still hasn't had one Covid case

Women who have gone through menopause have 'hyperintensities', raises risk of Alzheimer's