Germany ‘getting ready for the worst case’ over Russian gas

The ramped-up security measures, confirmed by German Interior Minister Nancy Faeser, come amid a major policy shift at the Bundestag, which is boosting its defence spending to more than 2 percent of its economic output in one of a series of moves sparked by Russia’s invasion of Ukraine.

Ms Faeser told The Welt am Sonntag newspaper: “There are currently 599 public shelters in Germany. We will check whether we could upgrade more of such systems.

“In any case, the dismantling has stopped.”

Berlin is also looking into upgrading its public shelter systems and will increase spending on civil protection, Ms Faeser added.

The announcement follows German Chancellor Olaf Scholz’s pledge, days after Vladimir Putin’s full-scale war in Ukraine began, to supply €100b — £834.35m, as per the currency exchange at the time of writing — for military investments from its 2022 budget.

For comparison, the country’s entire defence budget was €47b in 2021 – which, according to NATO statistics, accounts for 1.53 percent of its GDP. 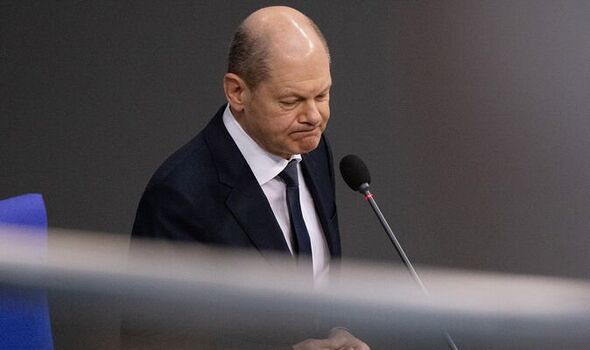 Mr Scholz told an extraordinary session of the Bundestag lower house of parliament on February 27: “We will have to invest more in the security of our country to protect our freedom and democracy.”

Germany, in the light of its 20th-century history and resulting pacifism among its folk, has long resisted pressure from Washington and other allies to raise its defence spending.

More than six weeks into the war, however, with thousands of people dead and millions displaced as a result of Russia’s aggression on Ukraine, Mr Scholz’s change in military approach seems a natural evolution.

Ukraine: ‘Killing of civilians was intended’ by Russia

On Saturday, speaking of the killing of civilians in the Ukrainian town of Bucha, the Chancellor said: “We cannot overlook that this is a crime. These are war crimes we will not accept… those who did this must be held accountable.

“This is something we cannot forget.”

Ukrainian officials say hundreds of civilians have been founded dead since Putin’s forces withdrew from the area last week.

According to the deputy mayor, Taras Shapravskyi, more than 360 civilians were killed and around 260-280 were buried in a mass grave by other residents.

‘If this is not a war crime, what is a war crime’: EU representatives on killings in Bucha (Image: Getty)

She told reporters at the close of a visit to the war-torn nation: “My instinct says: If this is not a war crime, what is a war crime, but I am a medical doctor by training and lawyers have to investigate carefully.”

Specifically referring to the town, she added: “I saw the photos, (Ukrainian prime minister) Denys Shmyhal showed me: Killing people as they are walking by.

“We could also see with our own eyes, that the destruction in the city is targeted into the civilian lives. Residential buildings are no military target.”

A forensics team began exhuming a mass grave containing the bodies of civilians who local officials say were killed while Russians occupied the town on Friday.

Ukrainian President Volodymyr Zelensky on Monday went as far as to call the killings a “real genocide”, which is widely regarded as the most serious crime against humanity.

Defined as the mass extermination of a particular group of people, the murder of six million Jews in the Holocaust is recognised as such.