'Get serious!' Boris told he MUST act as enemies launch bitter 'hatchet job' to topple PM

Boris Johnson, 57, is under mounting pressure from Tory MPs to quit as Conservative leader after the ex-Brexit Secretary David Davis, 73, called on the Prime Minister to resign and Bury South MP Christian Wakeford, 37, defected to the Labour Party. However, allies of Mr Johnson have told Express.co.uk they still have confidence in him to lead the Conservative Party.

Red Wall MP Brendan Clarke-Smith, 41, said: “I think we should avoid jumping to conclusions or making any rash decisions until Sue Gray has published her report.

“I do think the current situation has been turned into a hatchet job by some, and many opponents of the Prime Minister see it as an opportunity to do what they’ve been unable to at the ballot box.”

Speaking about Mr Johnson’s appearance in the Commons on Wednesday, he added: “I thought the Prime Minister gave an excellent performance at PMQs this week, and with the announcement that we are now coming out of restrictions, it shows we’ve been right to pursue the path we have.

“If we’d have done what others wanted we’d have still been in lockdown now.

“Instead, we are now the most successful country in Europe in terms of beating Covid and getting our economy back on track.

“I’m glad he called out the hypocrisy of the opposition rather than the defection causing the ‘domino effect’ they were hoping for, all it served to do was embolden and galvanise MPs, especially in the new intake.

“Now Labour are being attacked by their own CLPs who want to know why they have admitted somebody elected as a Conservative MP, but won’t let Jeremy Corbyn back in.”

JUST IN: No10 ‘worried’ Sue Gray may have damning evidence against Boris in Partygate probe 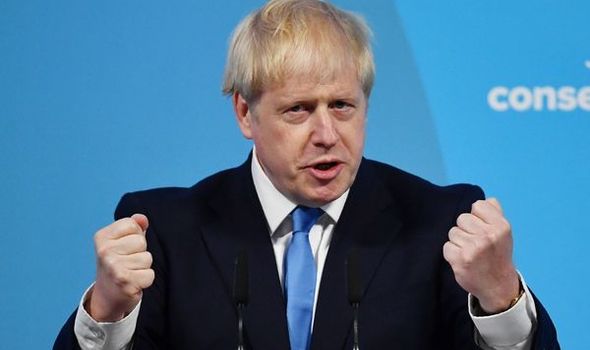 “I do think the current situation has been turned into a hatchet job by some” (Image: GB News/Twitter)

The Bassetlaw MP also suggested the Conservatives need to go “gangbusters” on illegal immigration and the cost of living in order to shore up Tory support inside and outside of Westminster.

Despite Mr Clarke-Smith’s comments, fellow Brexiteer William Wragg, 34, has accused the Government of blackmailing Tory MPs who are considering handing in letters of no confidence to the 1922 Committee chairman Sir Graham Brady, 54.

While MPs from all corners of the Conservative Party are reportedly plotting against Mr Johnson, the Prime Minister’s former chief of staff Dominic Cummings, 50, is considered a key figure in the anti-Boris brigade.

Cummings, who worked with Johnson on the Vote Leave campaign in 2016, left Number 10 after a power struggle reportedly broke out inside Downing Street.

But while Mr Cummings might be gunning for the Prime Minister, not everyone who worked with Mr Johnson on the Vote Leave campaign agree with him.

One senior Vote Leave source told Express.co.uk: “There’s a difference between what I want and what I think will happen.

“But it is very important for Brexit that Boris Johnson stays in place, especially with Northern Ireland Protocol discussions at a crucial and delicate stage.

READ MORE: ‘Nothing to fall back on!’ Boris Johnson facing downfall as pundit savages ‘pointless’ PM

The PM’s former chief of staff Dominic Cummings is a key figure in the anti-Boris brigade. (Image: Getty)

“However, things are looking dicey for Boris.

They added: “People didn’t vote for Boris in 2019 because he’s the most pious Prime Minister ever, he’s clearly not, they voted for him because they believed that he’d make their lives better.

“Boris needs to go into full delivery mode for the Red Wall, demonstrating that he understands people’s concerns and delivering on the promises he’s made.

“If he delivers, the Downing Street drinks will be forgotten.

“But he needs to get serious – fast.”

Mr Johnson has relied on the backing of pro-Brexit Conservative colleagues to boost his support inside an otherwise tetchy Tory Party.

“If he delivers, the Downing Street drinks will be forgotten.” (Image: Getty)

“Lab-LibDem-Green-SNP would break up Britain, destroy Brexit and bankrupt us.” (Image: Getty)

Former UKIP and Conservative MEP David Campbell-Bannerman, 61, said he believes Mr Johnson will survive ‘partygate’ and even defeat the “plotters” if they succeed in bringing forward a confidence vote.

Campbell-Bannerman, who voiced support for Johnson in the 2016 and 2019 Tory leadership contest, also issued a stern warning to those trying to oust him as Prime Minister.

He claimed: “You could be inviting your own destruction and that of your party’s for years to come – we will have been in power for 14 years at the next election, longer than Tony Blair.

“We will need a proven election winner to stay in Government and a coalition between Labour, the Liberal Democrats, Greens and SNP would break up Britain, destroy Brexit and bankrupt us.”

However, the Prime Minister will still need to put in the work to reassure MPs he is capable of leading the Conservative Party into the local elections and beyond.

Speaking after Mr Johnson launched his fightback on Wednesday, one Tory MP told Express.co.uk: “I’m honestly not sure how the mood has changed.”

He added: “I suspect the defection has made those considering letters early hold back.”