Gigi Hadid looked stylish as she was seen out and about in New York City earlier on Friday.

The 27-year-old showed off her toned abs in a fitted, tan cropped T-shirt. She added light blue, ripped jeans to add some edginess to the look.

The supermodel pulled off a casual yet fashionable look as she walked in the hot weather around the big apple. 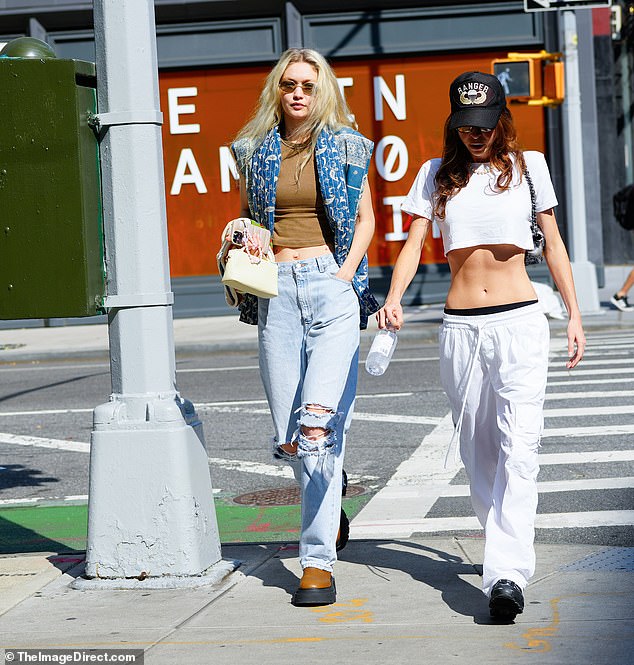 Gorgeous: Gigi Hadid, 27, looked beautiful as she flashed her toned abs while out and about with a pal in New York City on Friday

She wore a blue vest with green patterns on top which blended well with the jeans.

To make walking around the busy streets easy and pain-free, Gigi opted for a pair of brown boots with thick soles.

The Victoria’s Secret model had her blonde hair pulled back in a messy bun, not needing to style her long locks for running errands.

Gigi opted to not add any accessories to her ensemble, and only added a pair of sunglasses to protect her eyes from the bright sun. 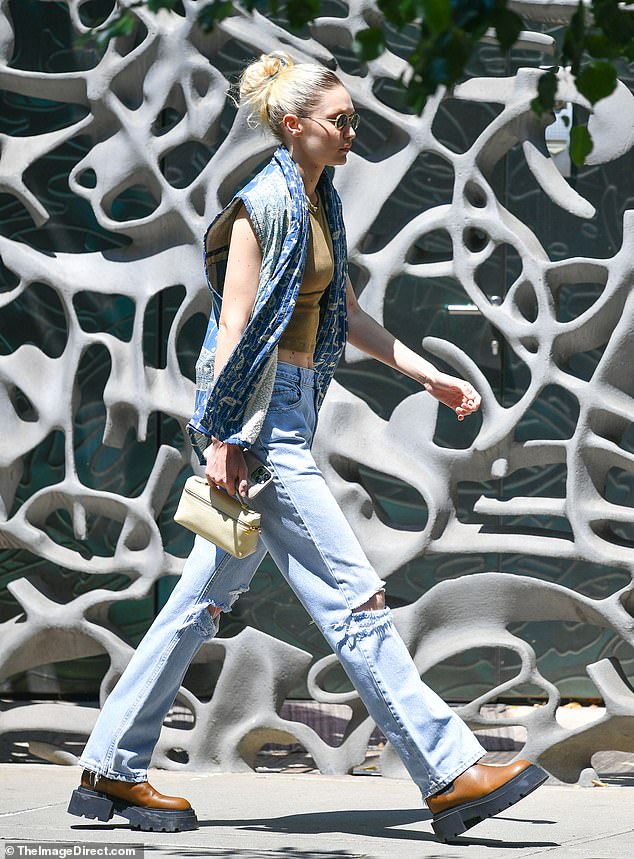 Stylish and cool: The model looked very edgy in her cropped shirt and patterned vest as she enjoyed an outing in NYC

She carried a small, cream-colored purse in her hand. The bag was rectangular shaped with enough room to hold essential items.

The model had been in an on and off relationship with former One Direction member, Zayn Malik, since 2015.

The couple announced Gigi was expecting their first child in April 2020, and later that year, their daughter, Khai Hadid Malik, was born. 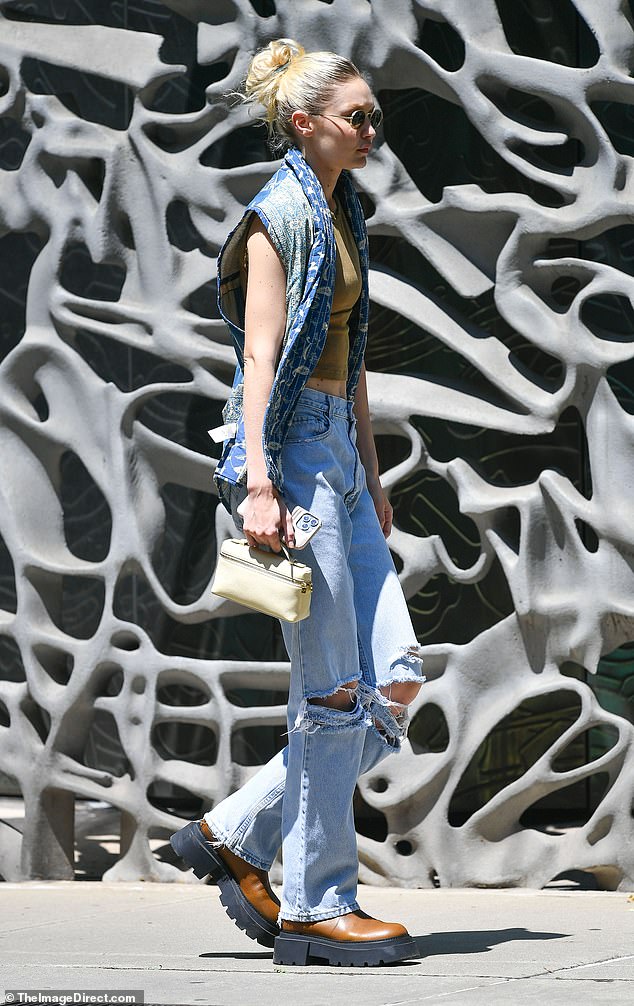 Style: To make walking around the busy streets easy and pain-free, Gigi opted for a pair of brown boots with thick soles 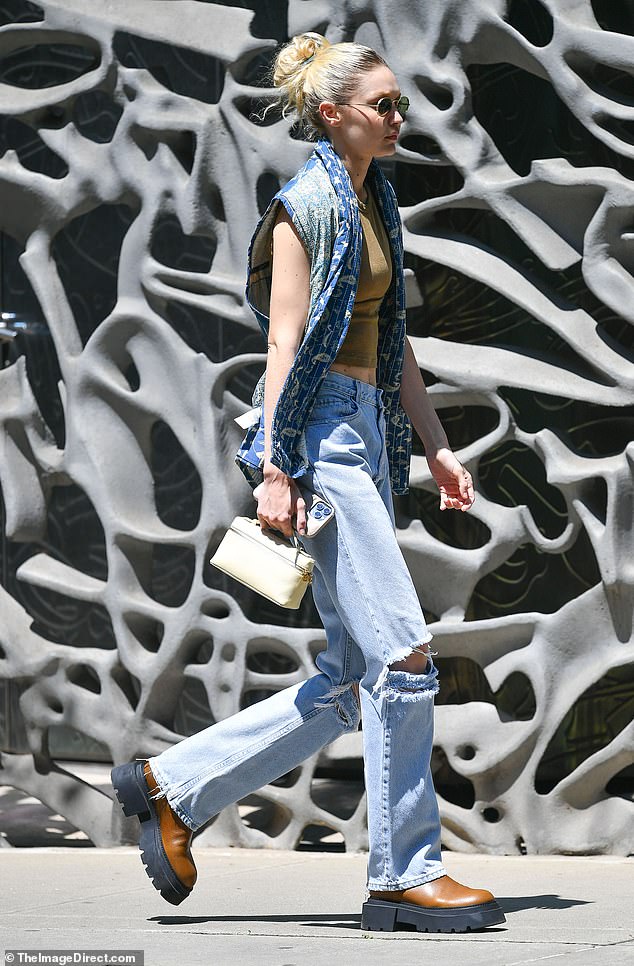 Minimalistic look: Hadid opted to not wear any jewelry and only carried a small bag for her overall look

The Dusk Till Dawn singer entered a no contest plea to four charges of harassment against Yolanda.

The singer was ordered to 360 days of probation, including taking an anger management class and a domestic violence program.

The two still remain close and have been working on co-parenting their only daughter.

According to Us Weekly, a source confirmed that Gigi and Zayn are doing well at being in Khai’s life.

‘They’re not living together, but Zayn visits Gigi and Khai at the farm in Pennsylvania a lot when they’re there,’ the insider stated.

The source also informed the publication that despite their relationship being over, the two still have a, ‘loving and caring relationship.’

Gigi shared an adorable Father’s Day post to showcase Zayn’s fatherly love for his daughter, showing that they are still on good terms with each other. 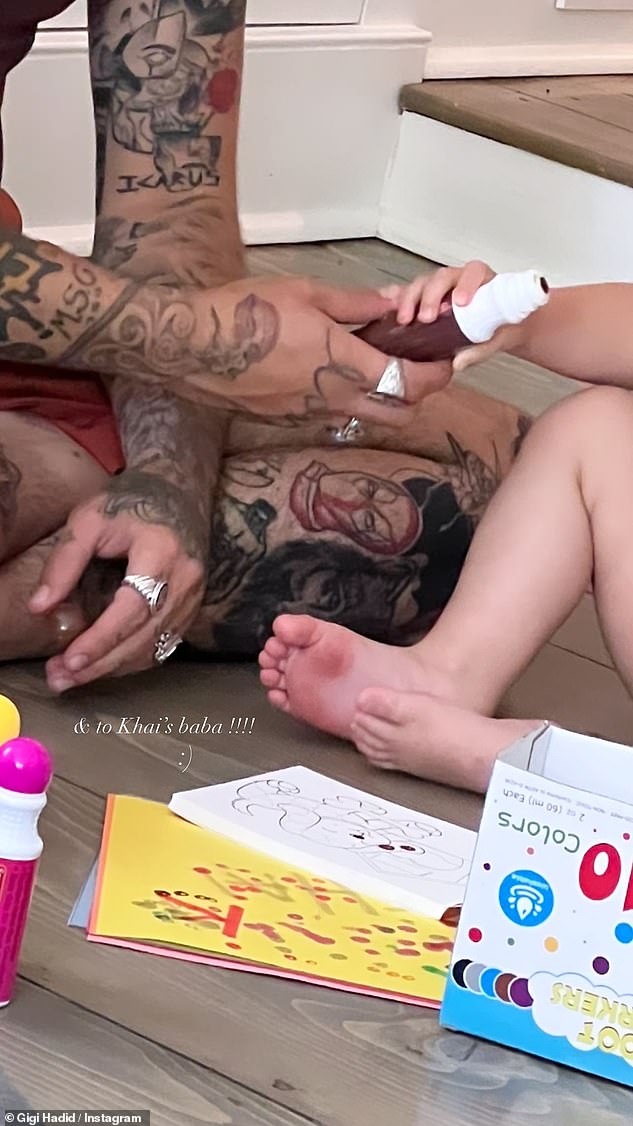 Still part of the family: Although Gigi and Zayn are no longer together, the singer still remains a close father to their daughter