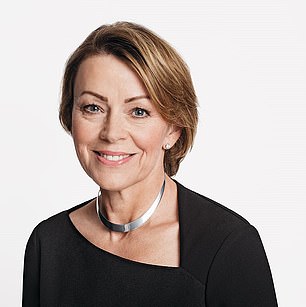 Pharma giant GlaxoSmithKline (GSK) is to become the largest London-listed firm with both a female boss and finance chief after poaching an executive from Burberry.

The FTSE 100 group said Julie Brown, the luxury fashion brand’s chief operating and financial officer, will join in April and succeed finance boss Iain Mackay, who is retiring in May.

She also worked at bandage and medical equipment maker Smith & Nephew and is a non-executive director at Swiss healthcare firm Roche, a position she will probably need to relinquish. And she has served as a member of Boris Johnson’s business council.

‘I am absolutely delighted that Julie will be joining the leadership team….[she] is a highly experienced CFO with a tremendous understanding of the biopharma sector,’ said GSK boss Emma Walmsley.

‘I want to thank Iain for all he’s done and for his leadership and support to our people. He has played a very significant role to help deliver the reshaping of GSK.’

Brown will be paid a base salary of just over £915,000 a year, with a potential bonus of the same amount and share awards of up to £1.8million.

Her arrival will make GSK the largest firm on the London Stock Exchange with an all-female executive team.

GSK recently spun out its consumer healthcare business, which makes brands such as Sensodyne toothpaste and Panadol painkillers, into a new company called Haleon which listed on the stock market in July while GSK focuses on drug and vaccine development.

GSK aims to grow sales by at least 5 per cent and profits by 10 per cent over the next five years and rake in at least £33billion in annual sales by 2031.