Golden Globes 2022: Rachel Zegler tears up as she wins Best Actress award for West Side Story

Rachel Zegler teared up as she reacted to her Golden Globe award for Best Actress in a Motion Picture – Musical or Comedy for West Side Story.

The actress, 20, who made her feature film debut in the flick, beat out Marion Cotillard (Annette), Alana Haim (Licorice Pizza), Jennifer Lawrence (Don’t Look Up) and Emma Stone (Cruella).

Taking to Instagram following her win, Rachel shared a clip of herself with a tear rolling down her face as she mouthed: ‘What the f**k is going on?’ 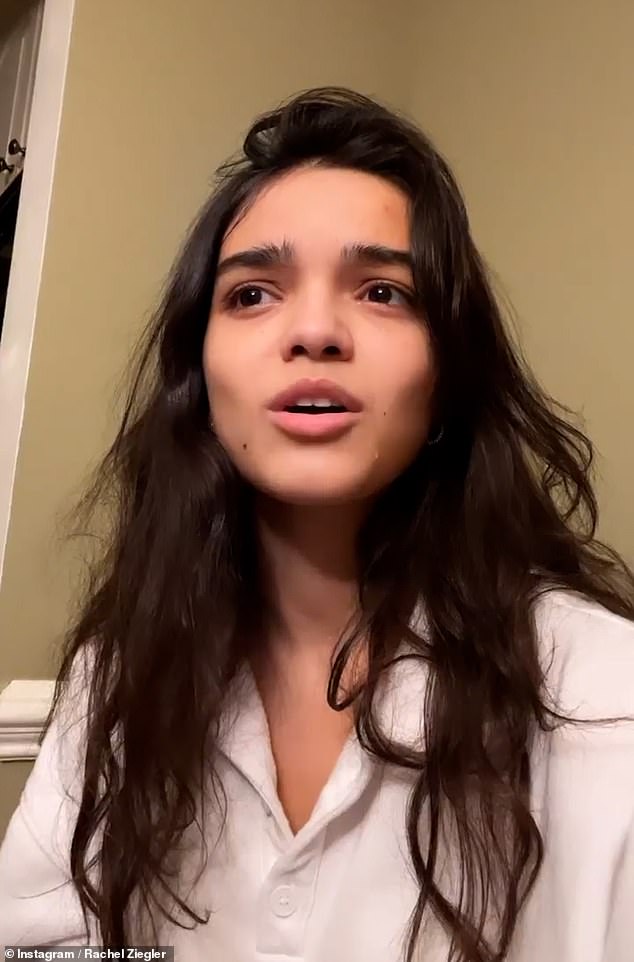 Emotional: Rachel Zegler teared up as she reacted to her Golden Globe award for Best Actress in a Motion Picture – Musical or Comedy for West Side Story

The film star also took to Twitter to react to her award, telling how she won the gong exactly three years after she was cast in the role of Maria.

Rachel starred in the film, which was directed by Steven Spielberg, opposite Ansel Elgort and Rita Moreno. 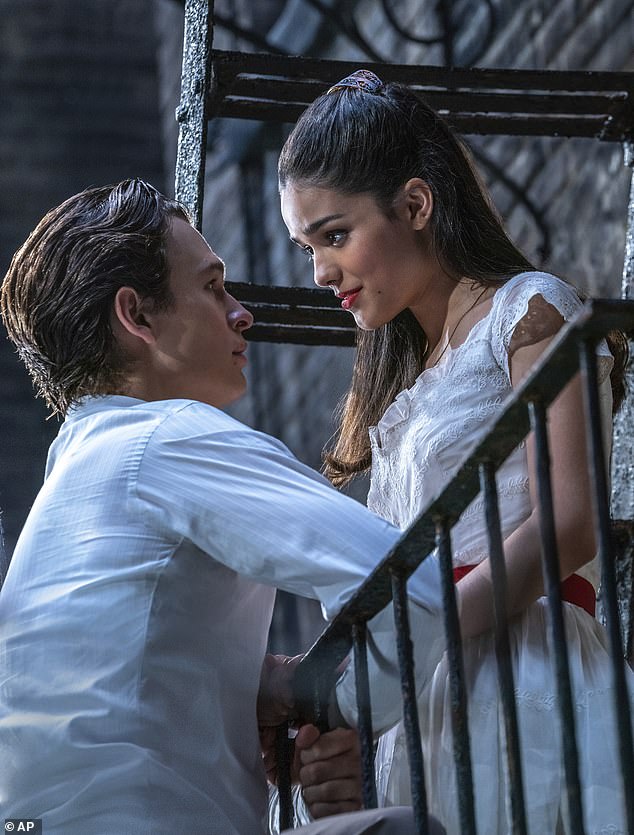 Role: Rachel starred in the film, which was directed by Steven Spielberg, opposite Ansel Elgort (pictured) and Rita Moreno

The musical adaptation of the Broadway classic beat out Cyrano, Don’t Look Up, Licorice Pizza and Tick Tick Boom for Best Motion Picture – Comedy or Musical.

The awards had no live broadcast or livestream as NBC previously announced that it would not televise the 2022 ceremony due to the lack of diversity, while Amazon Studios and Netflix announced plans to stop their activities with the HFPA until sufficient changes were made.

In May, NBC said in a statement: ‘We continue to believe that the HFPA is committed to meaningful reform. 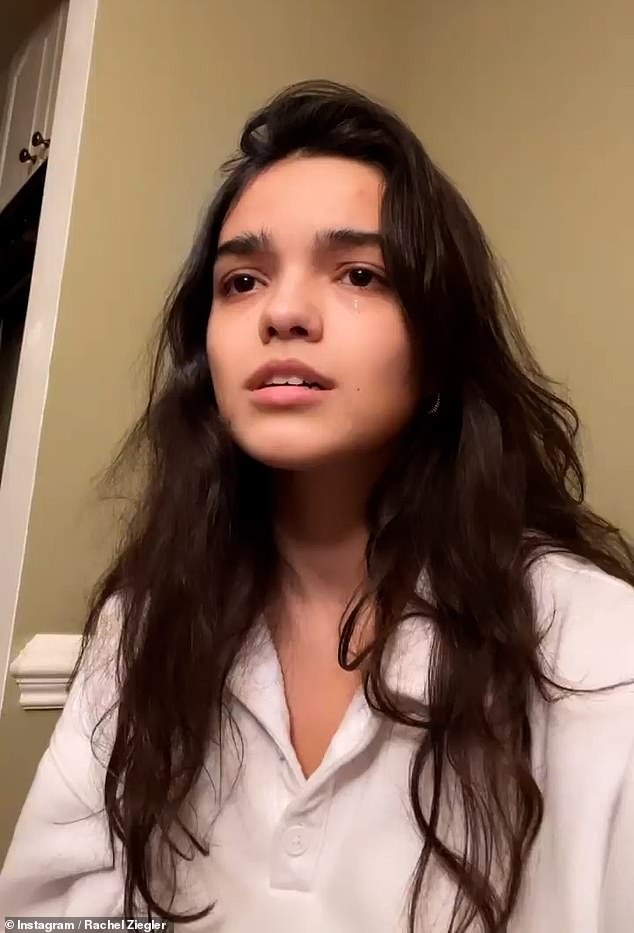 Shocked: The film star also took to Twitter to react to her award, telling how she won the gong exactly three years after she was cast in the role of Maria

‘However, change of this magnitude takes time and work, and we feel strongly that the HFPA needs time to do it right. As such, NBC will not air the 2022 Golden Globes.

‘Assuming the organisation executes on its plan, we are hopeful we will be in a position to air the show in January 2023.’

It was revealed by Variety that the Globes’ talent booker reached out to several publicity agencies about getting celebrity presenters, but none agreed to take part. 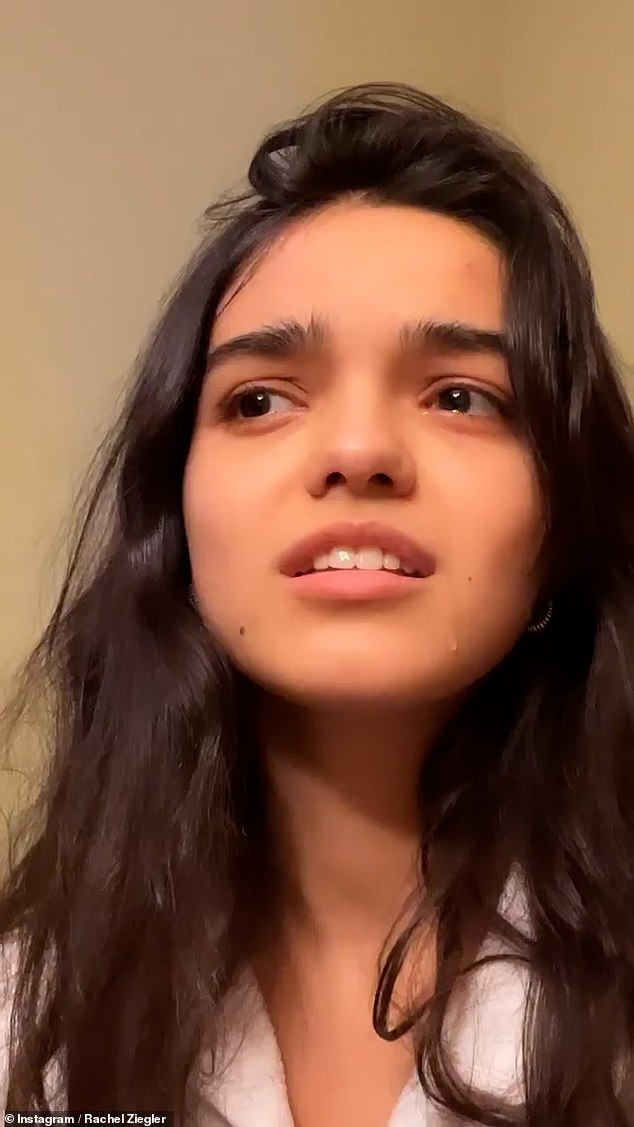 HFPA president Helen Hoehne, gave a speech focusing on the organisation’s attempts to diversify and a focus on its philanthropy work after a controversial year which culminated in last year’s televised ceremony suffering a 60% drop in viewers.

‘Last year the Hollywood Foreign Press Association was challenged to change – and we did,’ said Hoehne. ‘Both internally, within the Association, as well as adding 21 members to bring fresh perspectives.

‘We are on a journey of change and we’re not going to rest. We are going to be outspoken about what we’re learning and challenge others to join us.’

Kyle Bowser, senior vice-president of the NAACP Hollywood Bureau, spoke of the ‘Reimagine Coalition,’ a joint five-year initiative to increase diversity, equity, and inclusion across the global entertainment industry. ‘Imagination is the currency that sustains and propels the entertainment industries,’ he said during the ceremony. 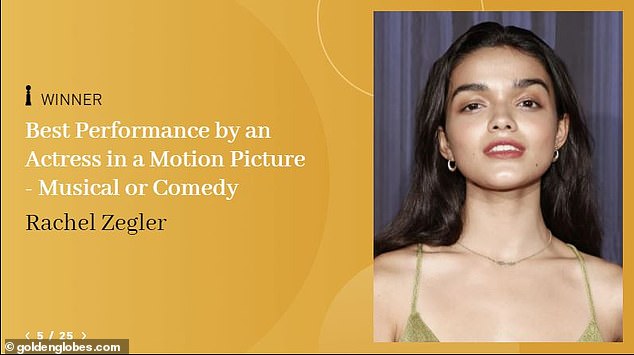 Hit: West Side Story dominated on the Comedy or Musical side, winning three awards on the night

A series of LA Times investigations last year revealed the lack of diversity in the HFPA’s voting membership. His expose reported that the 2021 voting panel did not include any black members.

In response to the LA Times article, the HPFA introduced a series of new bylaws and in October 2021, appointed 21 new voters to their board and created a new board of directors.

The organisation reports that it is the largest and most diverse class of new members in its history. They report that six of the new members are black, 10 are women, six are Latinx, five are Asian and four are Middle Eastern/North African.

They also announced they hoped by 2023, the ethnic-minority of membership of the HFPA will have increased by 50%. 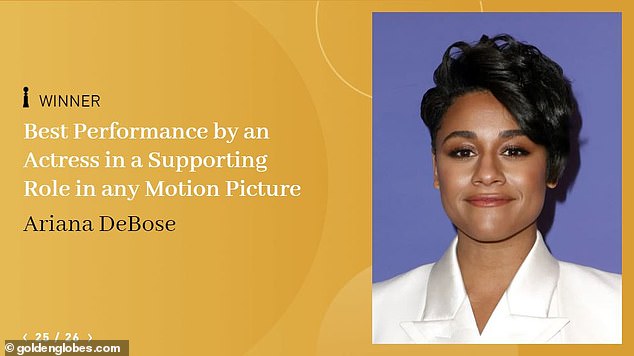 Winner: Rachel’s co-star Ariana DeBose won the Best Performance by an Actress in a Supporting Role in a Motion Picture award

Mark Ruffalo and Scarlett Johansson were the stars leading calls for a Golden Globes boycott, with Scarlett saying she had faced ‘sexist questions and remarks by certain HFPA members that bordered on sexual harassment.’

She released a statement last year that read: ‘As an actor promoting a film, one is expected to participate in awards season by attending press conferences as well as awards shows.

‘In the past, this has often meant facing sexist questions and remarks by certain HFPA members that bordered on sexual harassment. It is the exact reason why I, for many years, refused to participate in their conferences.’

She continued: ‘Unless there is necessary fundamental reform within the organisation, I believe it is time that we take a step back from the HFPA and focus on the importance and strength of unity within our unions and the industry as a whole’.

This year’s nominations included nine people of colour across the acting and directing categories – the same number as for the 2021 awards.

Only Murders in the Building

Best Performance by an Actor in a TV Series (Drama)

Best Actor in a Limited or Anthology Series

Oscar Isaac – Scenes from a Marriage

Steve Martin – Only Murders in the Building

Martin Short – Only Murders in the Building

American Crime Story: Impeachment is up for Best Limited or Anthology Series

Best Actor in a Supporting Role on a TV Series

Best Actress in a Limited or Anthology Series

Jessica Chastain – Scenes from a Marriage

Best Actor in a Film – Drama

Best Actor in a Film – Musical/Comedy

Anthony Ramos – In the Heights

Kodi Smit-McPhee – The Power of the Dog – WINNER

Kirsten Dunst – The Power of the Dog

Best Performance by an Actress in a Motion Picture – Drama

Nicole Kidman – Being the Ricardos – WINNER

The Power of the Dog – WINNER

Raya and the Last Dragon

Down to Joy from Belfast — Van Morrison