Priti Patel: Ukrainians to get permission to come to the UK online

Oleksandr Savsunenko had joined the public’s appeal for No10 to ramp up efforts to help Ukrainian refugees get to Britain. Amid struggles for part of his family to join him and his wife in London, the city they have called home for nearly two years, he told Express.co.uk: “The UK is one of the most supportive countries in the world for the situation, if not the most – in everything except the refugee scheme.”

He, like so many others, is deeply concerned about family members displaced by Russia’s invasion of Ukraine.

Out of the more than two million Ukrainians who, according to the UNHCR have so far escaped, over half have gone to Poland.

With a 310-mile shared border, the Eastern European nation had received 1,204,403 refugees by Tuesday.

While Hungary, Romania, Slovakia and the Czech Republic have all welcomed more than one hundred refugees, only 500 visas — five percent of applications — had been issued by the UK to those fleeing the war by Tuesday.

By Wednesday, the number had climbed to 760, and Prime Minister Boris Johnson told MPs in the House of Commons “almost 1,000” visa applications from Ukrainians had been accepted.

HAVE YOUR SAY: Should Britain open door to ALL Ukrainians fleeing war? 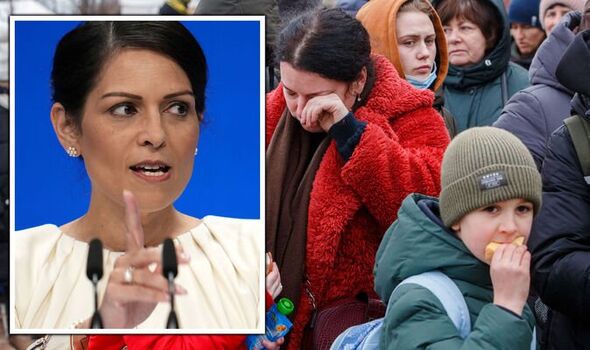 This, he said, would “rise very sharply” to eventually reach the hundreds of thousands.

However, the Home Office’s Ukraine Family Scheme has been criticised for its lack of clarity.

On Thursday the Government responded to criticism refugees were facing too much paperwork by announcing that, from March 15, those who have an ID or passport will be able to apply for visas digitally.

According to Ms Patel, they would then be able to give their biometric data upon arrival in the UK.

Mr Savsunenko’s sister-in-law had tried to apply for a visa when an application process opened on March 4. She filled out the required forms and collected and translated documents such as proof of relationship with a UK resident and evidence she was living in Ukraine before the start of the year.

But on March 6, she was no longer able to hand in her application in the western city of Lviv. Instead, she had to do it in Poland, Moldova, Romania or France, where her biometric information, such as fingerprints, would be taken at visa application centres.

The UK’s response to Ukrainians fleeing their war-torn country has been heavily criticised (Image: Daily Express)

Mr Savsunenko said: “If you really want, you can go to Poland, sit there for a few days, find a place to live, then travel to the major city centre, where there is an embassy, apply, wait…

“It’s warm, there is food, there is some stuff to do…”

However, he said the UK “assumes that you have money to travel, to stay in a hotel – and this is not the case for the majority of the people”.

Before the news of the improved process emerged, Mr Savsunenko said “a very simplified visa entry” was urgently needed.

As the Home Secretary announced an online portal was underway, still slightly sceptical, he told the Express he and his wife will be “very happy” if the journey “from statement to an actionable possibility” to bring their families over “takes a reasonable time”.

He added: “We’ll be monitoring this one closely.”

Proudly wearing a t-shirt featuring the face of Ukrainian President Volodymyr Zelensky, he said: “I’m not asking for the right to work and study.

“We will take care of them when and if they’re able to reach the UK, and we will find a place to live, we will find food.”

The UK has pledged millions of pounds in aid to Ukraine, including cash injections into its economy.

On Tuesday, No10 unveiled plans to phase out Russian oil imports by 2023 and said it was exploring ending gas imports, too.

And on Wednesday, Defence Secretary Ben Wallace confirmed the Government will send more weapons to Ukraine, including fresh supplies of anti-tank missiles.

Commenting on the support provided by London to Kyiv, Mr Savsunenko claimed: “We are incredibly grateful to the UK, to be honest, but if they just fix the refugee scheme, [we’ll have] nothing (else) to wish for.”

The Family Scheme’s digital system is set to relieve pressure on visa processing centres that will be able to focus on people without passports – a development that is expected to be well-received among the public and across the political spectrum.

However, details on when a second scheme for refugees in which people and organisations could sponsor Ukrainians to come to the UK.