Harry Styles posed with a breakfast tray and donned striped pyjamas for images from his edgy Better Homes and Gardens shoot.

It came as his girlfriend Olivia Wilde was served custody papers by the father of her children Jason Sudeikis while live on stage at the 2022 CinemaCon on Wednesday night in extraordinary scenes.

The 38-year-old actress was at the center of the presentation for her film Don’t Worry Darling in Las Vegas on Tuesday night for 4,100 film industry experts, when she received the legal documents. 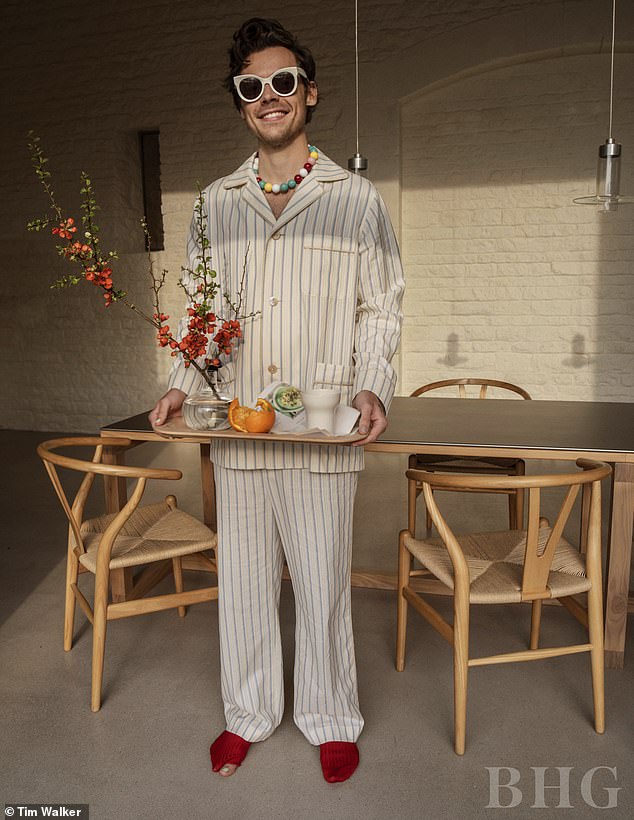 Here he is! Harry Styles posed with a breakfast tray and donned striped pyjamas for images from his edgy Better Homes and Gardens shoot

For his shoot former One Direction singer Harry, 28, held a tray with pretty flowers, an orange and a drink on it while posing in the loungewear and socks with holes in.

He completed the look with a statement colourful beaded necklace and white-rimmed sunglasses as he beamed for the camera.

Other images from the shoot show his face close up as he smiles handsomely while another is a close up of pretty yellow daisies slotted in between his toes, while in the accompanying article he discusses feeling ashamed of his sex life, admitting it ‘felt like the only thing that was mine’. 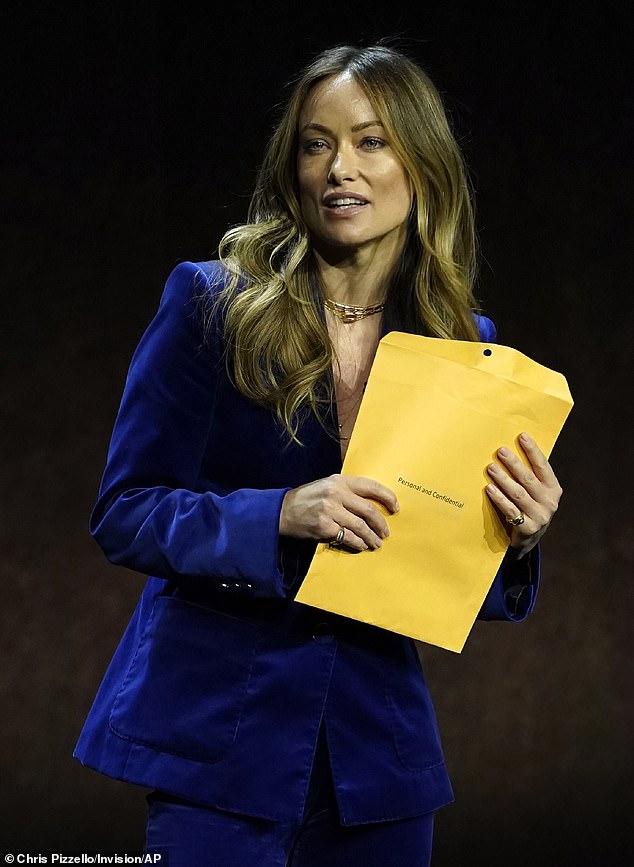 Odd: It came as his girlfriend Olivia Wilde was served custody papers by the father of her children Jason Sudeikis while live on stage at the 2022 CinemaCon on Wednesday night

Olivia was served custody papers by Jason while live on stage at the 2022 CinemaCon in Las Vegas on Wednesday night in front of 4,100 film industry experts.

Deadline reported on Wednesday that according to their sources the manila envelope that was placed on stage at Caesars Palace’s The Colosseum, contained custody papers from the 46-year-old Emmy winner.

And Variety has claimed that Sudeikis did not know Wilde would be served the papers in such a public and humiliating way. The actress is currently dating Harry Styles, 28. 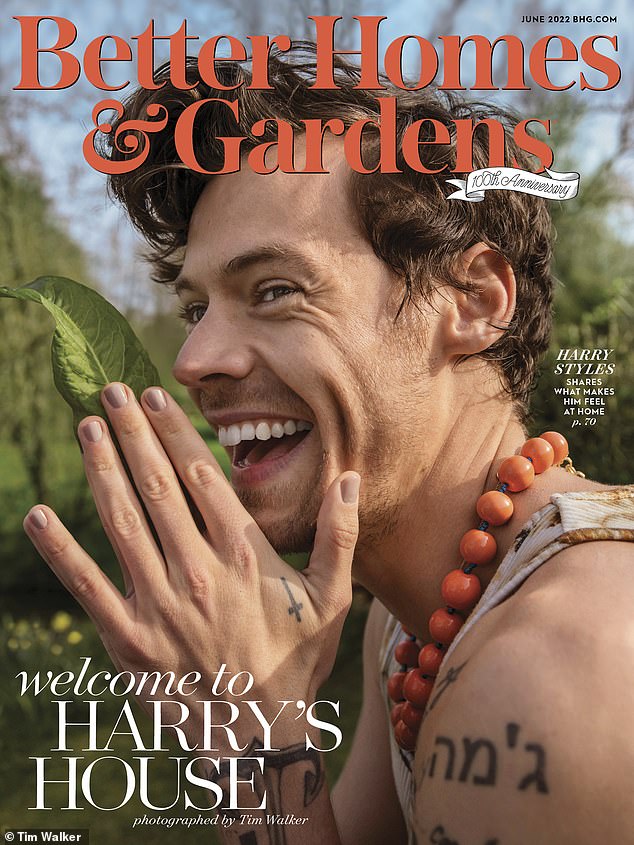 Star: Other images from the shoot show his face close up as he smiles handsomely, while in the accompanying article he discusses feeling ashamed of his sex life, admitting it ‘felt like the only thing that was mine’

A source told the publication: ‘Papers were drawn up to establish jurisdiction relating to the children of Ms. Wilde and Mr. Sudeikis,

‘Mr. Sudeikis had no prior knowledge of the time or place that the envelope would have been delivered as this would solely be up to the process service company involved and he would never condone her being served in such an inappropriate manner.’

It had initially been reported that the documents were an unsolicited script sent by a fan in the hopes of receiving Wilde’s attention.

Olivia was briefly interrupted when an unidentified person approached from the front rows of the audience as the Vegas event, and slid the manila envelope across the front of the stage toward her. 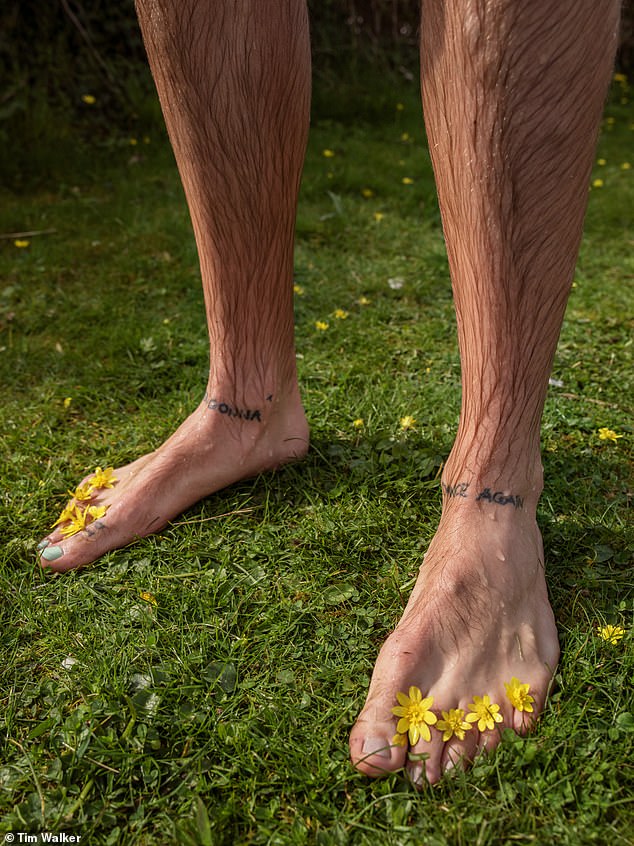 Edgy photoshoot: Harry in another shot had the camera zoom in on his feet as she showed off the tattoos on his legs

‘This is for me?’ Olivia asked, before opening the envelope and briefly reading the documents. She then continued with her presentation.

Olivia and Jason, who were previously engaged, had separated in late 2020 and share two children together: Eight-year-old son Otis and five-year-old daughter Daisy.

Details of their current custody arrangement remain private, and neither Olivia nor Jason have commented on the contents of the envelope.

At the time the unusual moment had sent attendees and reporters at the annual gathering of cinema owners and Hollywood studios, curious to the envelope’s contents, with some even wondering if she had just got ‘served’ with a subpoena to appear in court. 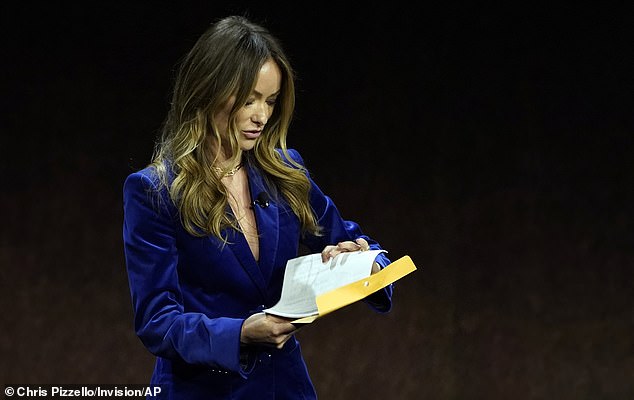 Interesting place: Olivia was served custody papers by Jason while live on stage at the 2022 CinemaCon in Las Vegas on Wednesday night in front of 4,100 film industry experts

Reporter Chris Lee detailed her reaction on stage in a tweet, which read: ‘Half way through her schpiel about Don’t Worry Darling, Olivia Wilde was handed a manilla envelope. Seemed like she got served a lawsuit!’

He said that the Booksmart director said: ‘This is for me? Is this a script? Ok got it. Thank you.’ I thought it was part of the presentation or a joke. But then…that was the end of it.’

‘Some woman walked up to the stage and left an envelope for her. 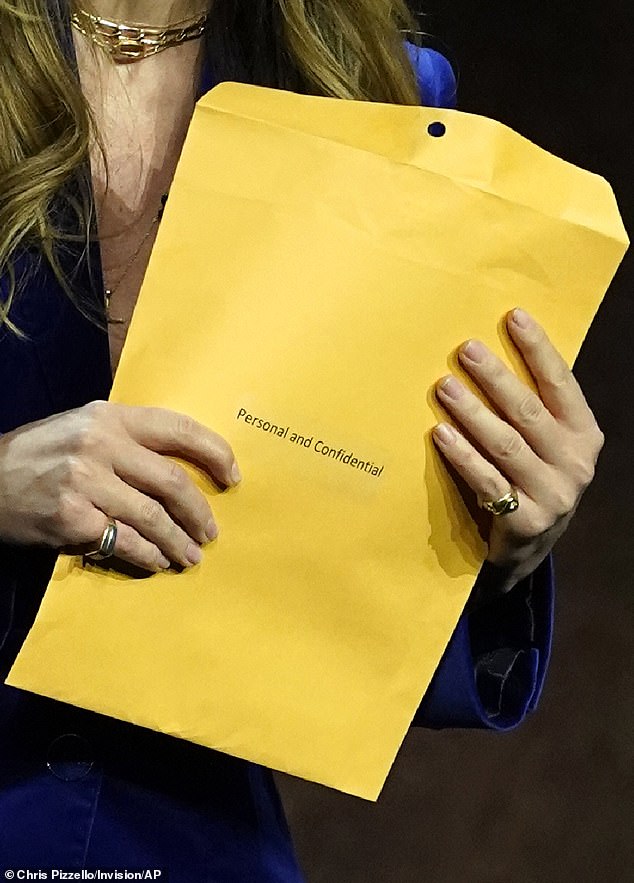 Awkward: The manila envelope that was placed on stage at Caesars Palace’s The Colosseum, contained custody papers from the 46-year-old Emmy winner

Olivia opened it and then never addressed it and continued on with her presentation.

‘We were expecting a bit but she never addressed the papers.’

CinemaCon said they are now reevaluating their security procedures, in light of the incident: ‘We have never in the history of the convention had an incident where a delegate has approached the stage who was not authorized to be there,’ Mitch Neuhauser Managing Director of CinemaCon said in a statement to Deadline.

‘In light of this incident, we are reevaluating our security procedures to ensure the safety of all our attendees.’ In order to get into Vegas’ Colosseum for CinemaCon, non-industry attendees need to purchase a badge.

Wilde’s latest film Don’t Worry Darling is being released by Warner Brothers this coming September and stars her much younger boyfriend Harry. 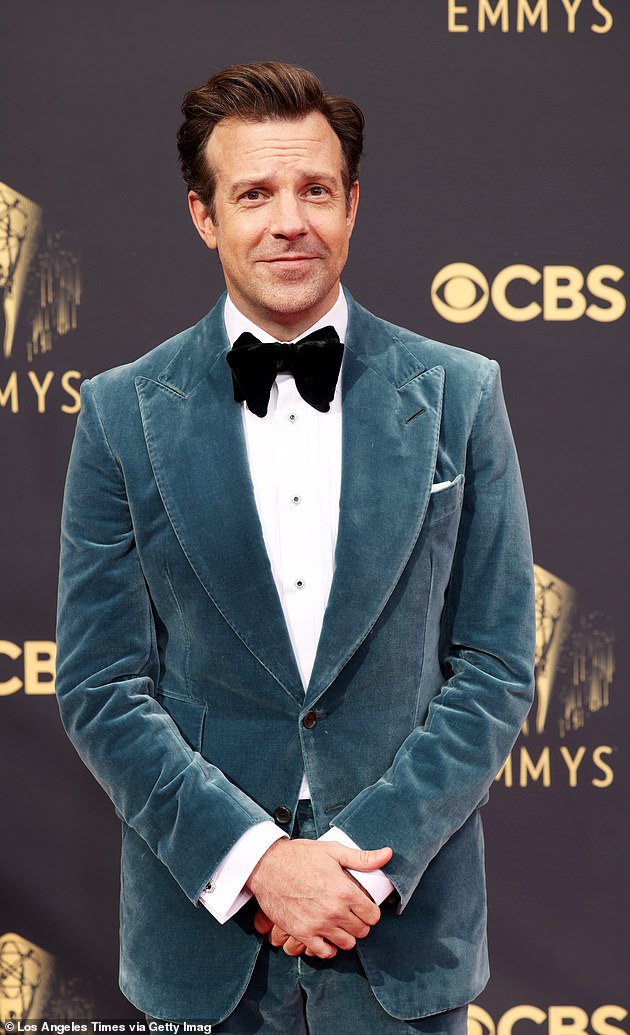 Difficult: Variety has claimed that Sudeikis did not know Wilde would be served the papers in such a public and humiliating way (pictured in LA in September)

The duo formed a close bond while shooting the psychological thriller, which also features the likes of Florence Pugh and Gemma Chan, in 2020.

News of Olivia and Jason’s split came on November 13, 2020 with sources claiming it was ‘amicable’ and that their two children son Otis and daughter Daisy Josephine would remain a ‘priority.’

Jason and Olivia’s split was first reported by PEOPLE with a source close to the couple saying: ‘The split happened at the beginning of the year [2020]. It’s been amicable and they’ve transitioned into a great co-parenting routine. The children are the priority and the heart of the family’s relationship.’

May, 2011 –  Jason and Olivia meet at a Saturday Night Live wrap party in 2011, when both were recently single after ending their marriages

November, 2011 –  The pair start dating after months of friendship

December 2012 – Jason proposes over the holidays

2014 – The couple welcome their first child, a son Otis

January 2021 –  Harry and Olivia’s romance is confirmed when they are seen holding hands at his agent’s wedding in Montecito, California, on January 3

Despite the initial reports of an amicable split, a source claimed to Entertainment Tonight in January 2021, that Jason had been ‘really hurt’ by her moving on with Harry.

A source said: ‘[Jason] has been really hurt and somewhat jealous that Olivia has moved on with Harry.’

There have also been conflicting reports as to the timeline of Olivia’s split from Jason and when she started her new relationship with Harry.

The original PEOPLE report on their split claimed that Olivia and Jason broke up ‘at the beginning’ of 2020, but further sources claimed ‘she and Jason were very much together as recently as this fall [2020].’

A report from UsWeekly claimed: ‘Olivia called off the engagement in early November [2020] but only after she already had gotten close to Harry.’ Olivia cast Harry in her film in September 2020 after Shia LaBeouf was fired from the role.

Rumours of Harry and Olivia’s romance were confirmed when they were seen holding hands at his agent’s wedding in Montecito, California, on January 3 2021, raising eyebrows over just how quickly she had moved on.

There were conflicting reports on the exact timing of their split, with a source claiming to PEOPLE in a January 2021 report: ‘Jason feels that the timeline that Olivia and Harry would like people to believe – that she and Jason split ages ago, long before she became involved with Harry – is simply not accurate.’

The source added that the trouble began around the start of production on Wilde’s sophomore directorial effort in the fall of 2020.

‘She began filming [Don’t Worry Darling] in September, and by October, he began to get the impression that she wanted out. By November, they’d announced their split.’

The source emphasized ‘that’s how quickly it happened,’ adding that ‘none of it happened until she began filming with Harry.’

In a December 2021 interview with American Vogue the actress referred to the timeline dispute, telling the magazine: ‘It’s obviously tempting to correct a false narrative.’

‘But I think what you realize is that when you’re really happy, it doesn’t matter what strangers think about you.’ 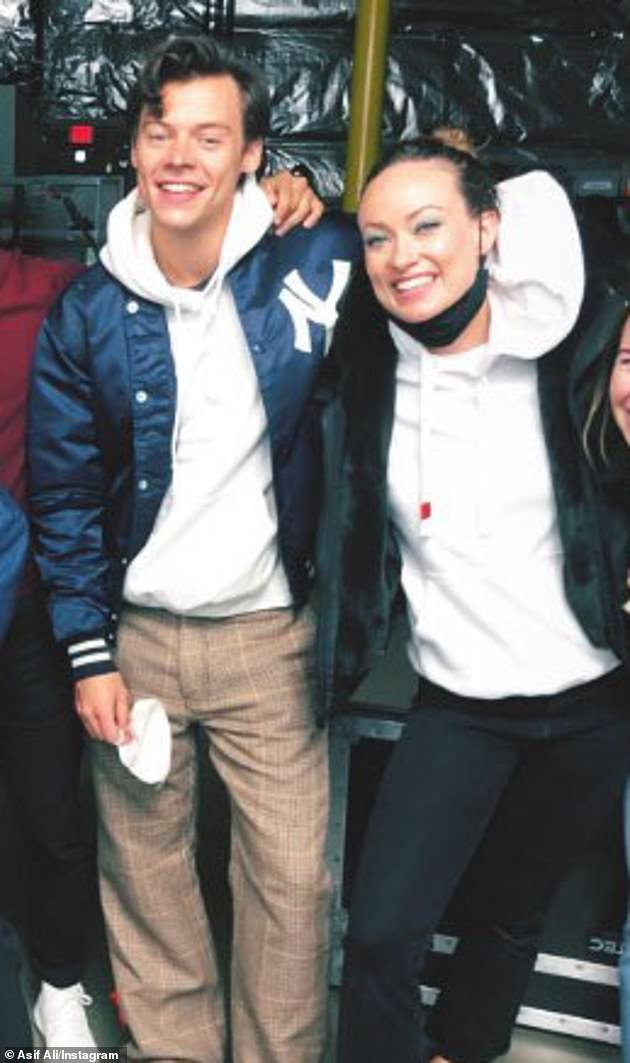 Sweet: Olivia is now dating Harry (seen on set in 2020) after they formed a close bond while shooting the psychological thriller Don’t Worry Darling in late 2020

Adding: ‘All that matters to you is what’s real, and what you love, and who you love.’

Jason meanwhile confirmed in a 2021 interview with GQ that the couple split in November 2020, admitting that ‘I’ll have a better understanding of why in a year.’

‘And an even better one in two, and an even greater one in five, and it’ll go from being, you know, a book of my life to becoming a chapter to a paragraph to a line to a word to a doodle.’

‘That’s an experience that you either learn from or make excuses about,’ he said. ‘You take some responsibility for it, hold yourself accountable for what you do, but then also endeavor to learn something beyond the obvious from it.’ 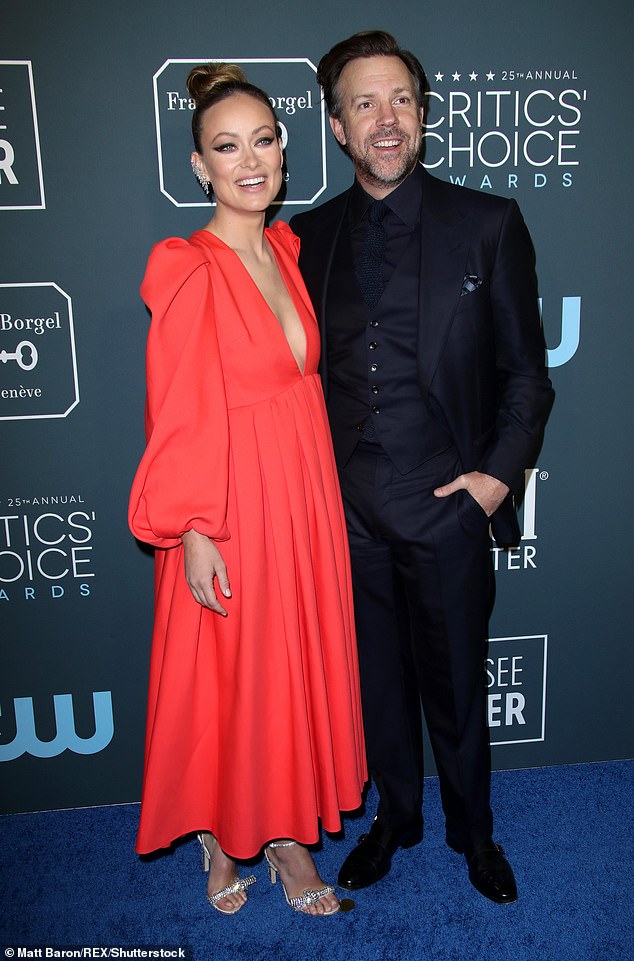 Exes: Olivia and Jason broke off their seven-year engagement in November 2020 with sources claiming it was ‘amicable’ and that their two children son Otis and daughter Daisy Josephine would remain a ‘priority’ (pictured January 2020)