'He was a dynamo!' Prince Philip service in stark contrast with 'deeply sad' funeral scene

The service of thanksgiving held at Westminster Abbey today made up for the funeral service that had to be held in a scaled-back and socially-distanced capacity last April due to the coronavirus restrictions in place at the time, according to royal commentator Richard Fitzwilliams. Recalling the funeral service for Prince Philip, held on April 17, the expert told Express.co.uk: “What we had at the funeral, of course, was the need for the Royal Family to follow coronavirus restrictions.

“That meant that the heart of the nation went out to the Queen, because she was sitting alone.

“And it was a deeply moving scene but also deeply sad.

“The funeral was of course what the Duke would have liked – but they couldn’t sing, you couldn’t have the hymns sang by the attendees.

“Also today you had the opportunity for 800 people to attend, including the Royal Family, foreign royals, various charities.” 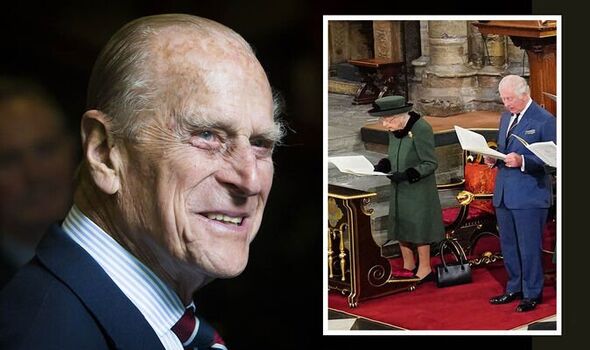 The Queen at the funeral service of Prince Philip in April last year (Image: GETTY)

Moreover, he continued, this service provided a clearer image to all watchers of the extraordinary scale of Prince Philip’s work and interests throughout his life.

He said: “This service showed the scale of Prince Philip’s activities, it was quite extraordinary.

“Prince Philip’s service didn’t consist just in supporting the Queen, it wasn’t only his engagements or his love for design, painting, reading.

“It was this extraordinary collection of charitable activities, his award scheme which has benefitted millions.

Hundreds of people were invited at the service (Image: GETTY)

“And obviously his environmental efforts, the military… and his love for sports, as a pilot, driver, polo player and you could go on and on.

“He was a dynamo, the number of his activities, if you counted them, at home and abroad, was just superhuman.”

The Queen was in attendance at today’s service.

As the highest-ranking member of the Firm, the monarch was the last person to enter the abbey in Central London.

The Queen arrived at the abbey with Prince Andrew (Image: GETTY)

Given the 95-year-old is experiencing some mobility issues, special arrangements were in place to make her attendance easier.

Among them, it was decided she would enter not from the main entrance but, rather, from the side doors near Poet’s Corner.

The Queen travelled from Windsor by car with Prince Andrew – who last attended a public event in 2021, Prince Philip’s funeral.

The Duke of York supported his mother while they walked down the nave at the abbey – but the Queen walked the last few steps to her seat alone, using only the support of a light walking stick.

This marked the first event attended by the Queen outside palace walls since mid-October last year, when her doctors advised her to “rest” and only engage for a period of time in light duties.

The Queen was joined by several other working and non-working members of the Firm – including Zara and Mike Tindall, Princess Anne and the York sisters, Princess Eugenie and Princess Beatrice.

The Duke and Duchess of Cambridge arrived with their eldest children – Prince George and Princess Charlotte – who charmed their way through the abbey by smiling widely and shaking hands with the clergymen welcoming them at the church.

Lady Louise Windsor and her brother James, Viscount Severn, also joined the congregation as the youngest grandchildren of the Queen and the Duke.

Notably absent was Prince Harry, whose representative announced earlier this month the Duke would not travel across the pond on this occasion.

However, they added, the Duke was hoping to be able to soon meet the Queen in person.