Experts have admitted it could take months to work out the cause of a mysterious global outbreak of hepatitis in children.

Nearly 200 cases of deadly liver disease of ‘unknown origin’ have been spotted across the world since the pattern was detected in March, mostly in under-fives.

One child is confirmed to have died from the complication, hepatitis is suspected in another death and at least 18 youngsters have needed a liver transplant.

But none of the cases tested positive for normal hepatitis viruses, which has left scientists puzzled about the origins of the disease.

Professor Alastair Sutcliffe, a leading paediatrician at University College London, told MailOnline it could be up to three months before a cause is proven.

‘With modern methods, informatics, advanced computing, real time PCR and whole genome screening, I would think that finding the cause with some reasonable reliability will take three months.’

Professor Sutcliffe said solving the puzzle could take even longer if it is not just one single factor causing the outbreak.

A group of common viruses which normally cause the common cold, known as adenoviruses, are thought to be involved.

But there are a number of conflicting theories about why the normally harmless virus is causing critical illness in young, previously-healthy children. 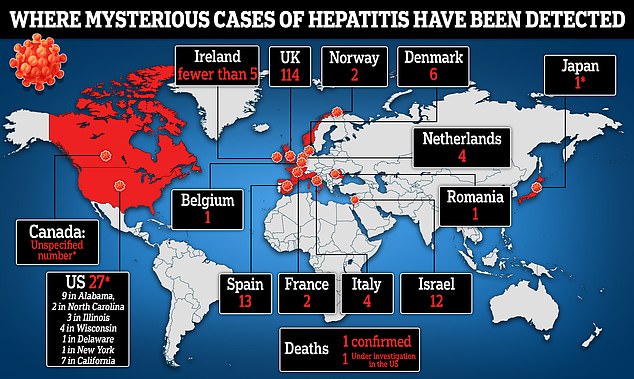 Nearly 200 children have been sickened by the condition across the world in up to 14 countries since last October *cases in Canada, Japan and Wisconsin, Illinois and New York are still yet to be confirmed

Lockdowns may have weakened the immunity of children and left them more susceptible to the virus, or it may be a mutated version, experts say.

Officials have also yet to definitively rule out that Covid is involved in some way.

Some 114 cases of the mystery hepatitis have been confirmed in the UK — the highest number spotted of any country in the world.

There are 27 suspected and confirmed cases in the US, with seven announced in California yesterday. One child’s death in Wisconsin is being probed by officials.

Scientists have previously suggested cases could be just the ‘tip of the iceberg’, with more infections likely to be out there than have been spotted so far.

Professor Sutcliffe said the process could be slowed by red tape across international boundaries, with difficulties in transporting bio materials across countries.

Parental consent, data protection and laws regulating the use of human tissue in the UK could all act to slow research, he suggested.

Searching for an unknown cause is especially hard because cases may have multiple factors behind them that are not consistent across all illnesses.

UK health officials have ruled out the Covid vaccine as a possible cause, with none of the ill British children having been vaccinated because of their young age.

Liver experts described the spate of cases as ‘concerning’ but said parents should not worry about the illness affecting their children.

European Centre for Disease Prevention and Control (ECDC) official said the disease was ‘quite rare’ but judged the risk to children as ‘high’ because of the potential impact.

Covid lockdowns may be behind the mysterious spate of hepatitis cases in children because they reduced social mixing and weakened their immunity, experts claim

The risk for European children cannot be accurately assessed as the evidence for transmission between humans was unclear and cases in the European Union were ‘sporadic with an unclear trend’, it said.

But given the unknown causes of the disease and the potential severity of the illness caused, the ECDC said the outbreak ‘constitutes a public health event of concern’.

The surge in hepatitis cases was first recorded in Scotland on March 31, with one child in January being hospitalised with the condition.

At least one child has died of the mysterious disease so far, according to the World Health Organization.

Wisconsin is the only US state to report a suspected child death from hepatitis. If confirmed, it will be the first in the country and second in the world.

State officials confirmed to the DailyMail.com that the child had developed the disease after being infected with the adenovirus.

Most of the infected children were under 10 and many were under the age of five. None had other underlying health conditions.

The agency recommended improving surveillance and hygiene practices to stop the spread of cases.

Q&A: What is the mysterious global hepatitis outbreak and what is behind it?

What do we know about the global hepatitis outbreak?

Scientists have been left puzzled by a global outbreak of hepatitis that has caused up to two deaths and 17 liver transplants.

The inflammatory liver condition has been spotted in at least 169 children aged between one month and 16 years old.

None of the cases have been caused by  any of the five typical strains of the virus — hepatitis A, B, C, D and E.

Hepatitis is inflammation of the liver that is usually caused by a viral infection or liver damage from drinking alcohol.

Hepatitis often has no noticeable symptoms — but they can include dark urine, pale grey-coloured faeces, itchy skin and the yellowing of the eyes and skin.

Infected people can also suffer muscle and joint pain, a high temperature, feeling and being sick and being unusually tired all of the time.

When hepatitis is spread by a virus, it’s usually caused by consuming food and drink contaminated with the faeces of an infected person or blood-to-blood or sexual contact.

How many countries have cases been recorded in?

*cases in Canada, Japan and Illinois, US, are still yet to be confirmed

Do we know what is behind the outbreak?

Experts say the cases may be linked to a virus commonly associated with colds, but further research is ongoing.

This, in combination with Covid infections, could be causing the spike in cases.

The WHO reported adenovirus has been detected in at least 74 of the cases. At least 20 of the children tested positive for the coronavirus.

British experts tasked with investigating the spate of illnesses believe the endless cycle of lockdowns may have played a contributing role.

Restrictions may have weakened children’s immunity because of reduced social mixing, leaving them at heightened risk of adenovirus.

Public Health Scotland researchers said more children could be ‘immunologically naive’ to the virus because of restrictions.

Other scientists said it may have been a virus that has acquired ‘unusual mutations’.

This would mean it could be more transmissible or better able to get around children’s natural immunity.

UKHSA officials included ‘a new variant of SARS-CoV-2’ in their working hypotheses, when discussing the variant at  the European Congress of Clinical Microbiology & Infectious Diseases in Lisbon.

The UKHSA has noted Covid as well as other infections and environmental triggers are still being probed as possible causes of the illnesses.

The agency ruled out the Covid vaccine as a possible cause, with none of the British cases so far having been vaccinated because of their age.