If you go into any supermarket you’re likely to be bombarded with cheap, sweet treats that are high in sugar and calories.

There is nothing wrong with a bit of indulgence now and then but healthy alternatives are often few and far between.

Now imagine a world in which you could pick up a doughnut in a supermarket which has less sugar than an apple and the same calories as a slice of buttered toast. 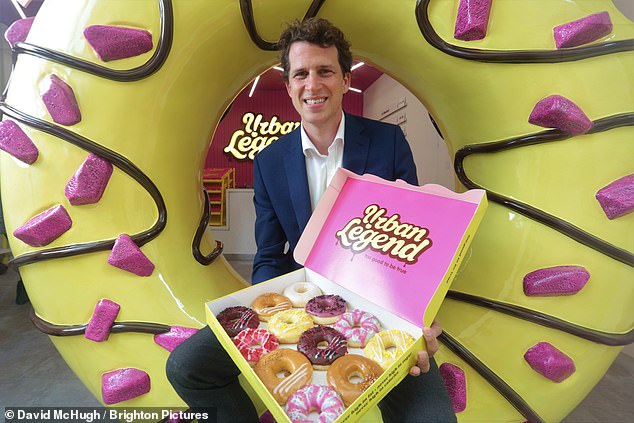 Whole in one: Anthony Fletcher has found a way to make healthy doughnuts that have at least 30% less calories than competitors

The sweet treats will soon be launched to the masses following a recent deal with Tesco to stock the treats in their stores across the capital.

So what is the science behind Urban Legend doughnuts and could it be the future of guilt-free snacking?

Fletcher started his career as a scientist before joining Innocent Smoothies in 2004.

After the Coca-Cola buyout, he moved to healthy snack company Graze where he eventually became chief executive until 2020.

‘I wanted to do it again. But something bothered me and that was that these healthier products – the smoothies, the snacks – it was hard to get people to change their behaviour.

‘There was a limit on the amount of healthy food people wanted to eat for a whole series of reasons.’

The Health Survey for England 2019 estimates that 28 per cent of adults in England are obese and a further 36.2 per cent are overweight.

A quarter of children aged between 10 and 11 are now obese with a further 15.4 per cent classified as overweight.

Even with these stark figures, policy focused on eating healthier food has only been able to achieve so much. 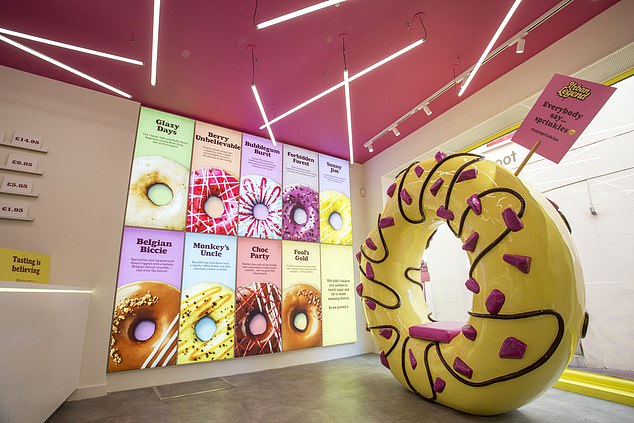 ‘Of all the work I’ve done, I’m sick of the consumer getting blamed for treating themselves.

‘Treats are delicious, they’re cheap and they’re advertised heavily and it’s almost socially abnormal not to do that.’

One of the refreshing things about Fletcher’s response to rising obesity and higher sugar and fat content in products is providing an alternative rather than apportioning blame to customers.

‘With my new venture I was much more interested in the idea of taking junk out of the junk, and the extent to which you can use cutting edge science to remove huge amounts of the sugar and fat and still give consumers the products I believe they will continue to eat.’

Fletcher started to think more seriously about how this would happen after a conversation with a nutritionist at Public Health England while at Graze.

‘This nutritionist said “It’s not working… there’s just not enough healthy food being sold and the vast majority of people are eating more and more junk every year.” And I think that’s where the seed for Urban Legend was planted.

‘A strategy that is just as important as exercise or education … is simply to look at all of these very bad foods and say “Well what would happen if you reformulated them, so they don’t do as much damage?”

‘The momentum generally is that most of the large companies are putting more sugar and fat into their food each year, not less. It’s cheaper, it’s more addictive. It’s a good business model’.

In late 2020 Fletcher launched his company Believe In Science to champion innovation within the food and drinks business.

He used the investment from the Graze sale to start exploring different techniques and chatting to scientists. From that, Urban Legend was born.

The biggest difference between Urban Legend doughnuts and the more calorific alternatives are that they are steamed rather than deep fried.

They’re expanded by heat and then set with a beam of steam rather than floating around in fat.

Fletcher and his team have also managed to find ingredients that ordinarily crop up in nature – in leaves and roots, as well as fruit like melon – which taste sweet but are not metabolised like sugar in the body.

Its first store opened in Brighton in July 2021 and the company has since opened a store in Clapham as demand has grown.

Naturally the process is more expensive and while Urban Legend has tried to keep prices as low as possible, Fletcher admits it may take some time to keep costs in line with doughnut giant Krispy Kreme.

It speaks to its general ethos in making healthy treats as available as possible.

‘There’s more to this than eating doughnuts. I want to show the larger companies in this category… that everyone has got it wrong! It is actually perfectly possible to make this stuff, we’ve just got to discover the new ingredients and techniques which can be used.

‘I really believe that in my heart. I believe in 20 years time we may look back, a bit like we look at smoking in pubs or drink driving and say good God, why did we put all of this stuff in our food?’ 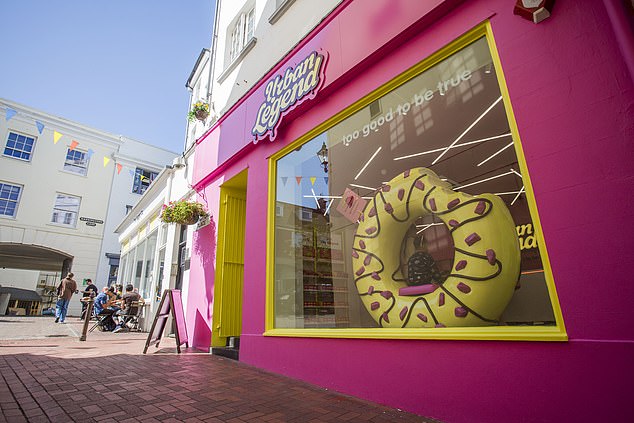 We may not have reached that point just yet but demand for healthy alternatives has certainly grown.

New companies offering healthy alternatives are cropping up everywhere. These include confectionary maker Nick’s which has crafted a chocolate bar with fewer than 100 calories, while Halo Top is rivalling Ben & Jerry’s at just 320 calories per tub.

It means Urban Legend’s recent deal with Tesco has come at an opportune time, with customers craving healthy alternatives.

The supermarket will soon stock Urban Legend doughnuts in stores across London after trials at stores in Putney and North Greenwich in recent months.

The deal follows Tesco’s decision to continue with plans to remove volume-led promotions on foods high in fat, sugar and salt (HFSS) products from October, after the announcement that restrictions on multibuy deals for HFSS products would be delayed by a year.

‘I’d underestimated that there’s a lot of major retailers out there who really do want to move the needle on health and move things in the right direction.

‘ But they struggle because they know that if they set up their stores in a certain way they sell more products, as public companies they have those stakeholders,’ says Fletcher.

‘I think the reason we had such traction with Tesco was because they saw this as a win win.

‘This was a way of replacing unhealthy foods at the front of store with something healthier while it’s still being very competitive and selling it up, you know, at the rate they need for the business model to work.’

Now the team at Urban Legend are looking to build a bigger factory to keep up with demand following a $7million Series A round, bringing total investment to $10million since last summer.

It’s clear investors see a significant opportunity in this technology and with Fletcher’s credentials Urban Legend may help change the face of sweet snacks.

This Is Money Taste Test

Urban Legend might be a healthy alternative but it’s meaningless if they don’t taste as good as their competitors.

We were kindly sent a box by the Urban Legend team to try and it’s safe to say they went down a storm, with most of the team unaware they were eating a doughnut with fewer calories than usual.

Some of the standouts were Lemon Drizzle, Blueberry Muffin and Strawberry Cupcake.

Prices start at £1.95 and the Glazy Days doughnut – most similar to an original Krispy Kreme – contains 139 calories and 3.1g of fat.

It still includes sugar and you can read the full ingredient list on the Urban Legend website.