Heather Rae Young hasn’t been shy when it comes to sharing updates on her pending bundle of joy since she and husband Tarek El Moussa went public with their pregnancy news in July.

And on Friday, the Selling Sunset star proudly showcased her growing baby bump when she headed out on an errand run in the Newport Beach area.

Heather, who also goes by her married sir name of El Moussa, kept comfy in black leggings and a gray tank top layered over a black sports bra. 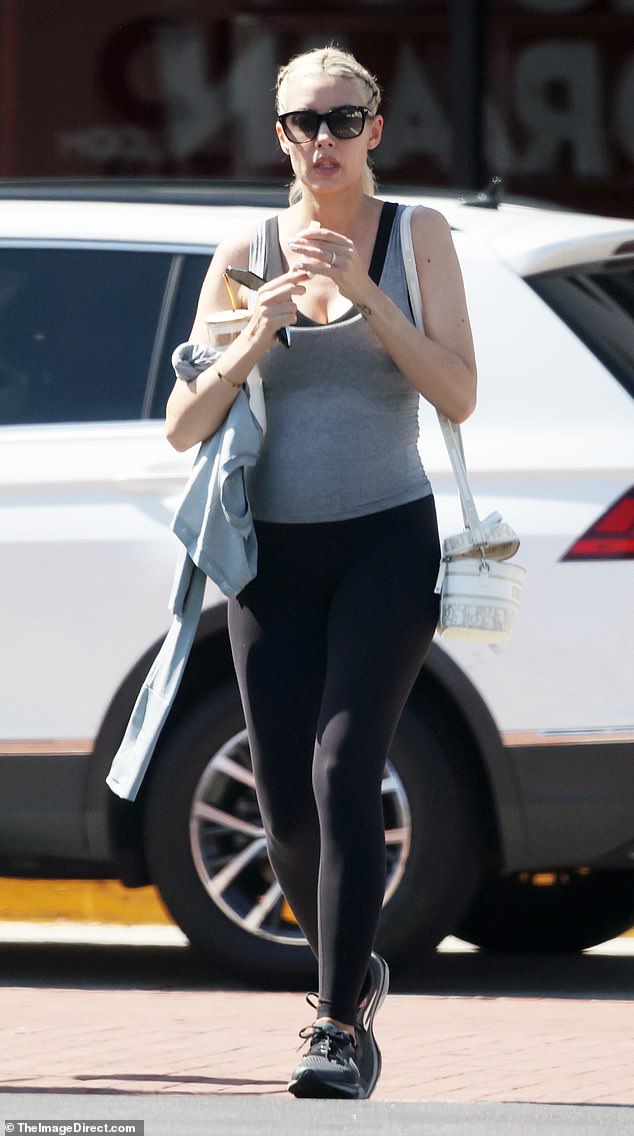 Mama to be: Heather Rae Young, who’s also referred to by her married sir name of El Moussa, put her growing baby bump on display during an errand run in Newport Beach on Friday

She also carried a long-sleeve sweatshirt, just in case.

Knowing she would be on her feet for an extended period of time, the reality star wore a pair of black running sneakers, as she slung a white purse over her left shoulder.

With the sun glaring down and the temperature reaching the mid-80s Fahrenheit, Heather, 34, donned dark sunglasses, and pulled her long blonde tresses into a ponytail with a part in the middle. 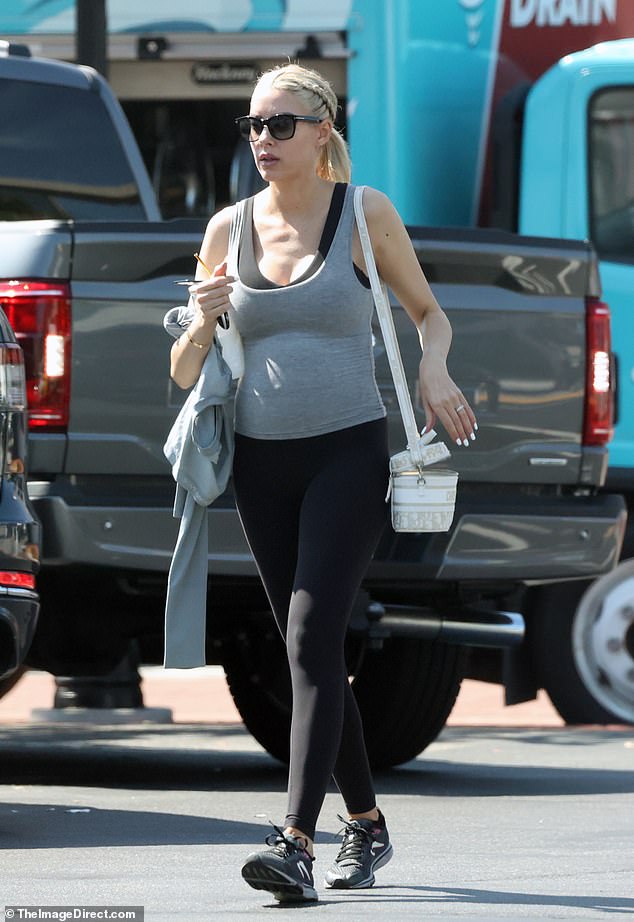 Soon-to-be mama: The Selling Sunset star, 34, proudly showed off her baby bump in leggings and a tank top while taking care of some personal business 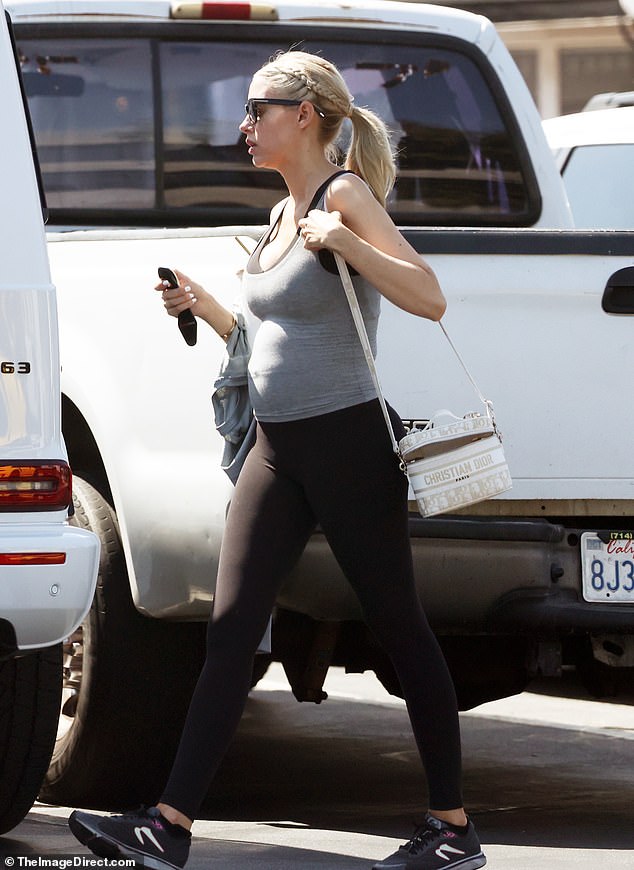 First-time mom: The reality star went public with her pregnancy in July, and announced they were expecting a baby boy in a gender reveal about two weeks later

So far, the reality star hasn’t showed any signs of slowing down since she and her husband came clean with their surprising baby news.

From there, they both took to their respective Instagram Stories to gush more about their pregnancy, which admittedly came as a shock since they had been struggling with fertility issues.

‘She is definitely pregnant! You see that belly!’ El Moussa, 41, added.

Heather went on to share, ‘Finally we can announce it. We’ve been hiding it, it’s been really hard, but we’re so excited we’re having a baby El Moussa!’ 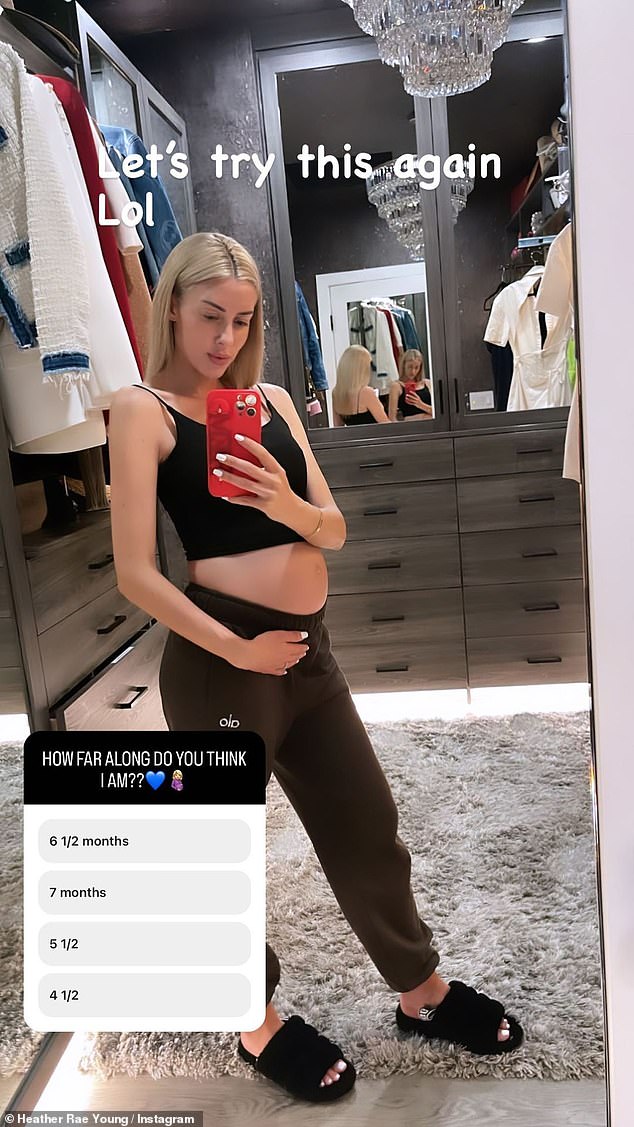 Open book: The Anaheim, California native hasn’t been shy when it comes to giving updates on the progress of her burgeoning baby bump on social media; she’s seen this week

Step-mama: Young confessed she can’t imagine her life without her two step-children

The couple, who wed in October 2021, would go on to hold a gender reveal party, where they announced they are expecting a baby boy.

This will be Heather’s first child and baby number three for El Moussa, who shares daughter Taylor, 11, and son Brayden, six, with ex-wife Christina Hall.

‘It’s weird because I never really imagined my life being a bonus mom to two kids, but now I can’t picture my life without them,’ the former Playboy Playmate gushed about her step-children in February 2021, as reported by Us Weekly.

She added, ‘I’ve gotten so close to Bray and Tay, and I get asked all the time about what it’s like to be their bonus mom (and future stepmama!!) and the truth is that it’s one of the best things that ever happened to me.

El Moussa and Heather met during a fishing trip in July of 2019, and went on to tie-the-knot in a ceremony near Santa Barbara last October. 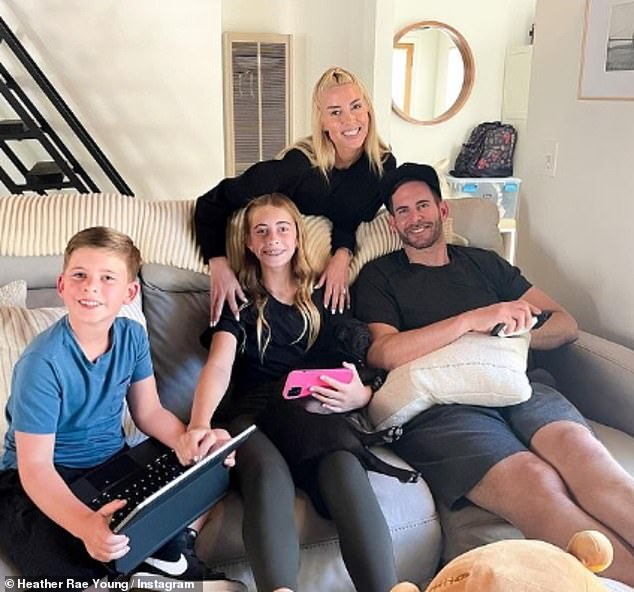 Growing family: Along with being a soon-to-be mama, Young is also step-mother to husband Tarek El Moussa’s two children –  Brayden, six, and Taylor, 11, whom he shares with ex-wife Christina Hall; the family are seen in recent Instagram photo

RuPaul's Drag Race Down Under: Spankie Jackzon on how she'll spend $50,000 cash prize