Hilary Duff has been hard at work playing the lead role of Sophie in the new sitcom- How I Met Your Father – that premiered on Hulu two weeks ago.

Shifting to promo mode for the series, which is a sequel to the hit show How I Met Your Mother, Duff drummed up a plan to trick her co-star Francia Raisa to get her over to her house for a visit on Wednesday.

But before all the shenanigans were captured on her Instagram page, the mother of three decided to spend some quality family time with three-year-old daughter Banks.

Scroll down to video 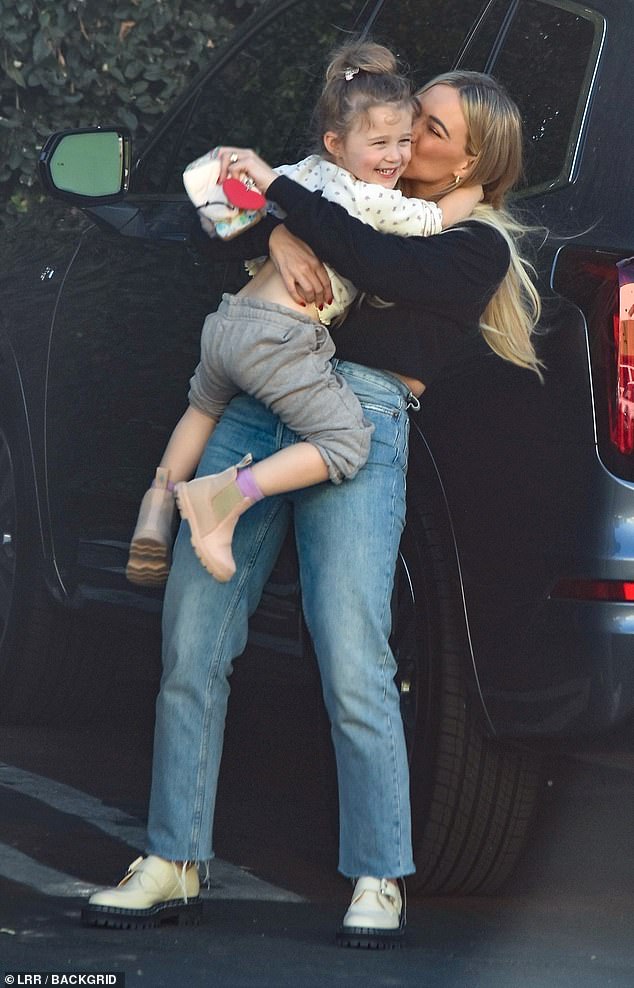 The pair were seemingly out and about in Los Angeles, and were caught on camera sharing a special moment minutes after arriving back to their house.

While standing on the driveway, just feet from their SUV, Duff had a burst of affection for her little girl and picked her up into her arms and and they shared a big hug.

During the beautiful embrace, the What Dreams Are Made Of star also slipped in a loving kiss on the cheek for Banks, who was all giddy over the exchange with her mommy. 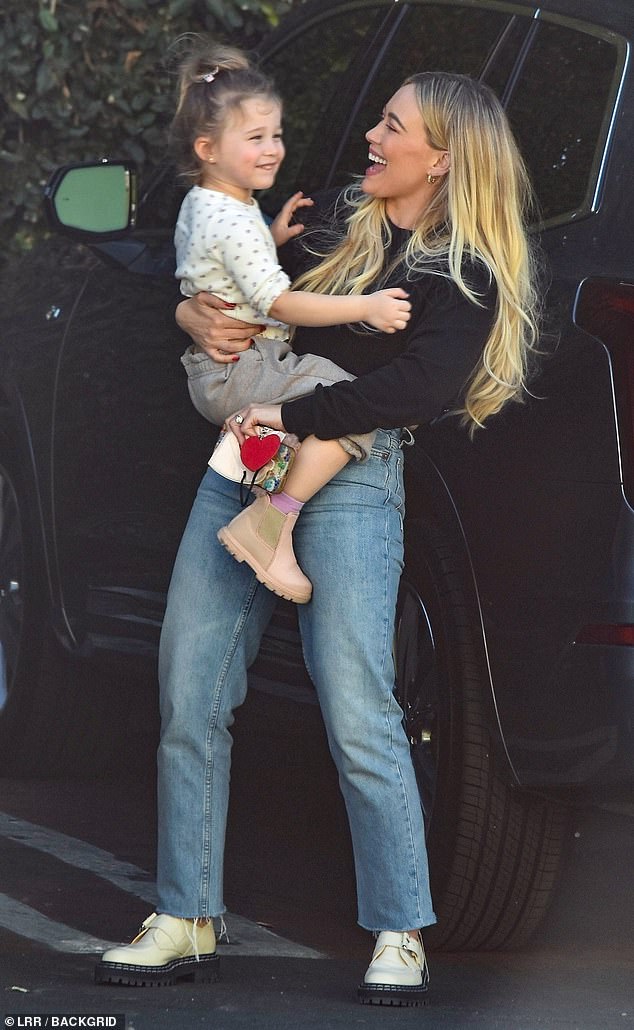 Giddy: The actress and singer shared a few laughs after their loving exchange 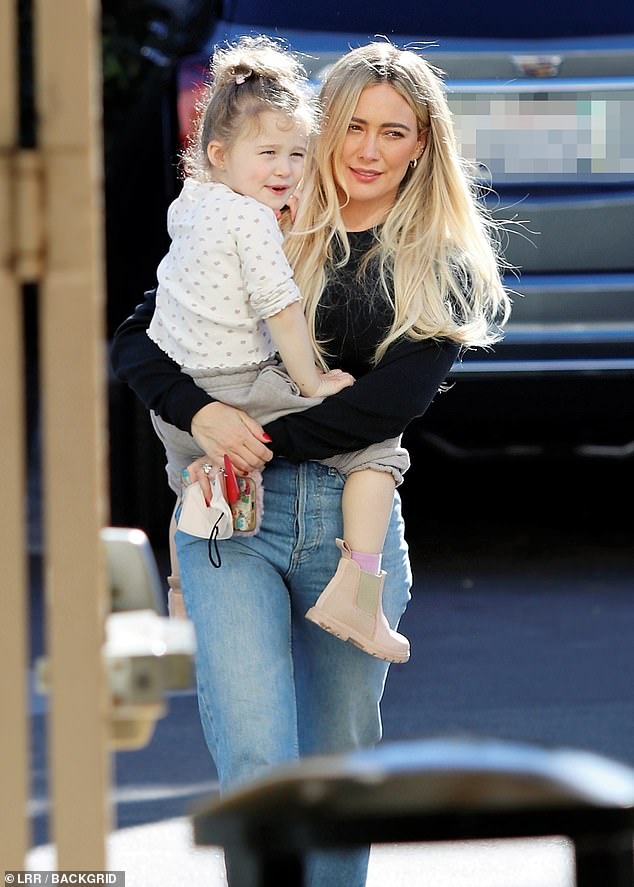 Stylin’: The actress and singer oozed casual-cool in the fashion department dressed in light blue jeans, a black cropped top that hugged her curves and stylish white shoes.

The actress and singer oozed casual-cool in the fashion department dressed in light blue jeans, a black cropped top that hugged her curves and stylish white shoes.

Her long blonde tresses appeared to have a special shine to it, as it flowed past the middle of her back, along with a bit of added volume and a part in the middle.

Banks looked adorable in light brown pants with a white-patterned shirt, cool ankle boots, and her blonde locks pulled into a loose bun.

Along with Banks, Duff also has a 10-month-old daughter with husband Matthew Koma. She also co-parents her son Luca, nine, with ex-husband, and former NHL player, Mike Comrie, whom she was married to from 2010 to 2016. 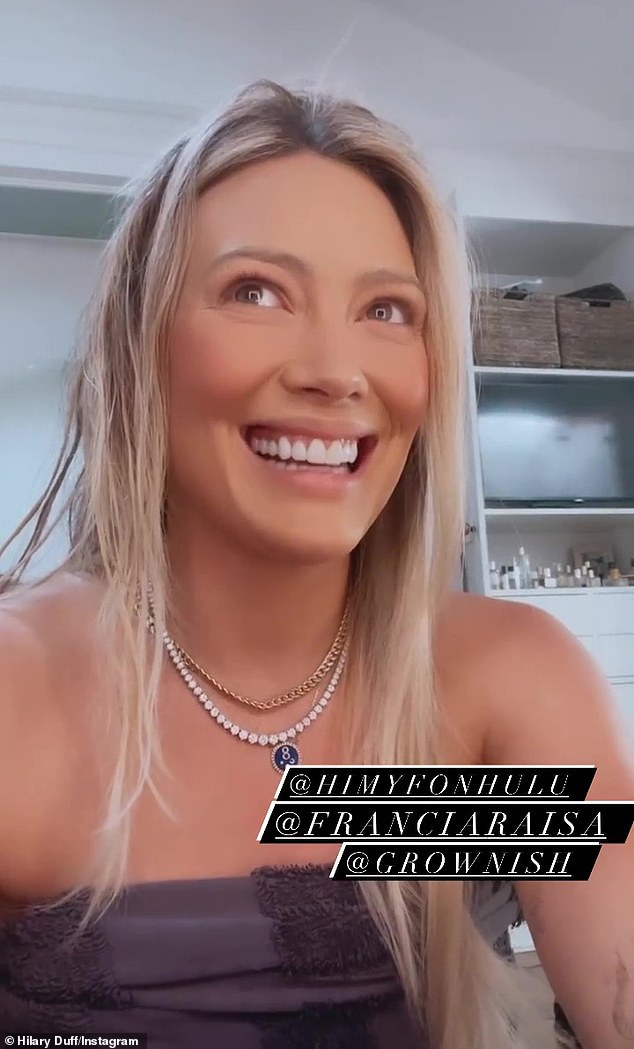 Trickery: Duff also spent her Wednesday telling her Instagram fans and followers how she tricked friend and co-star Francia Raisa to get her to stop by her house for a visit 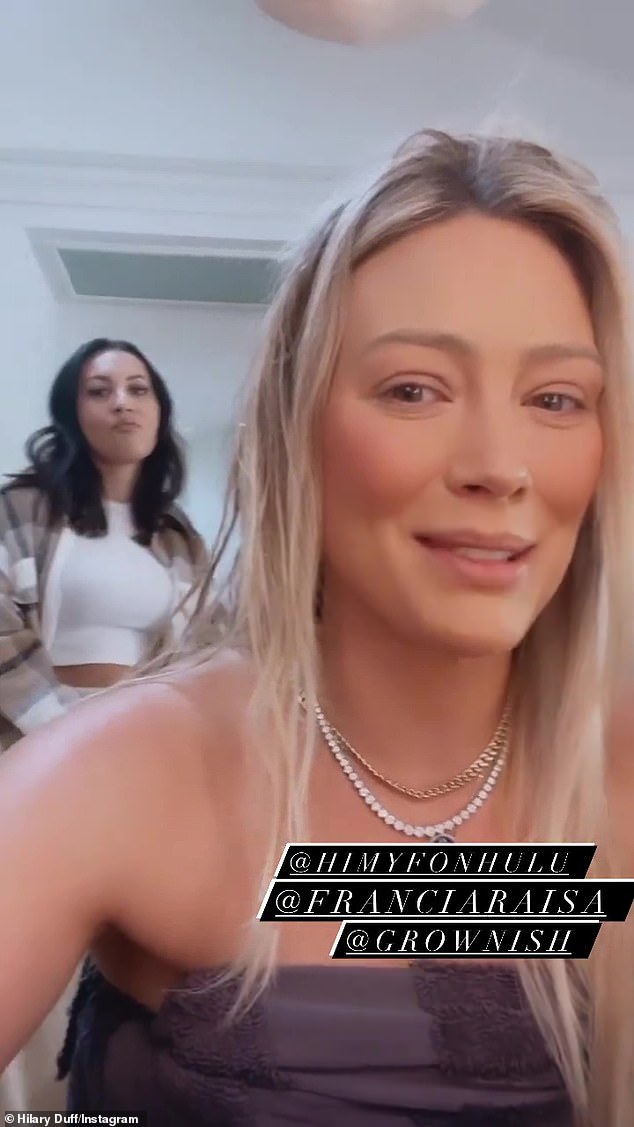 Surprise: Just as Duff confessed to playing ‘a mean trick on a friend’, Raisa, 33, popped into the view of the camera and proceeded to walk towards her friend

Once situated back at home on Wednesday, and the kids were attended too, Duff turned her attention to the trickery she played on Francia Raisa, 33.

‘Today I played a mean trick on a friend,’ she confessed in a post on her Instagram Story, while sounding like someone taking pride in a guilty pleasure.

‘I told her to come over. I told her I’d be ready but really I just wanted her to hang out with me,’ she added with a sly grin that transformed into a big beaming smile on her face.

Just as Duff confessed to her trickery, Raisa popped into view and began to walk towards the camera: ‘Are you going to feed me at least?’ the Grown-ish star jokingly asked Duff, adding, ‘You’re eating a sandwich; didn’t even off me one.’ 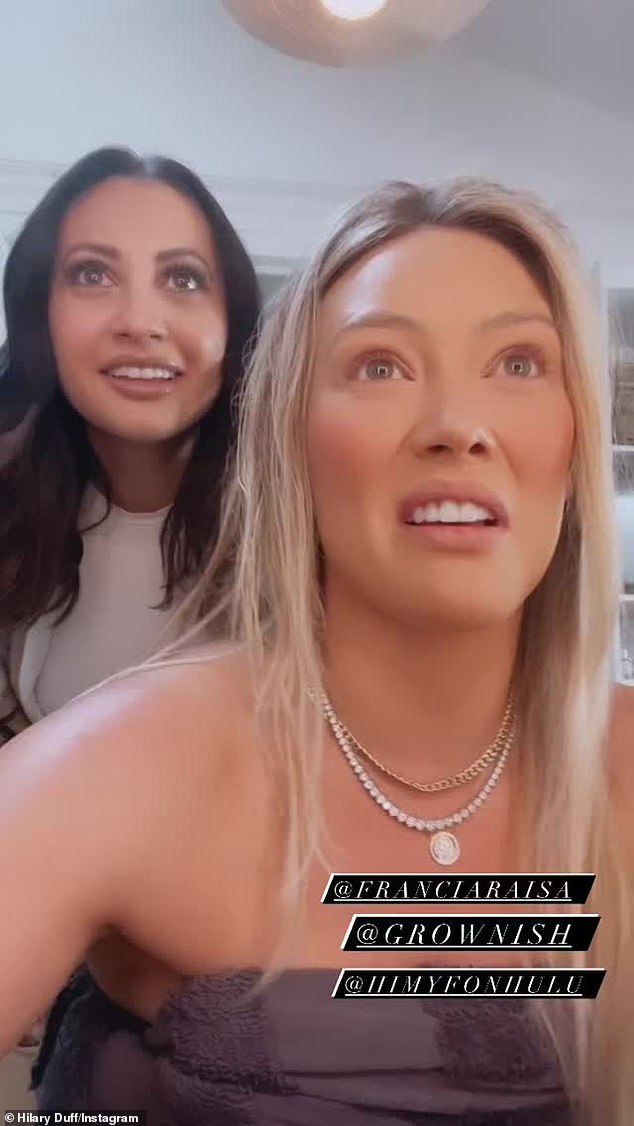 Banter: ‘Are you going to feed me at least?’ The Grown-ish star jokingly asked Duff, adding,  ‘You’re eating a sandwich; didn’t even off me one’ 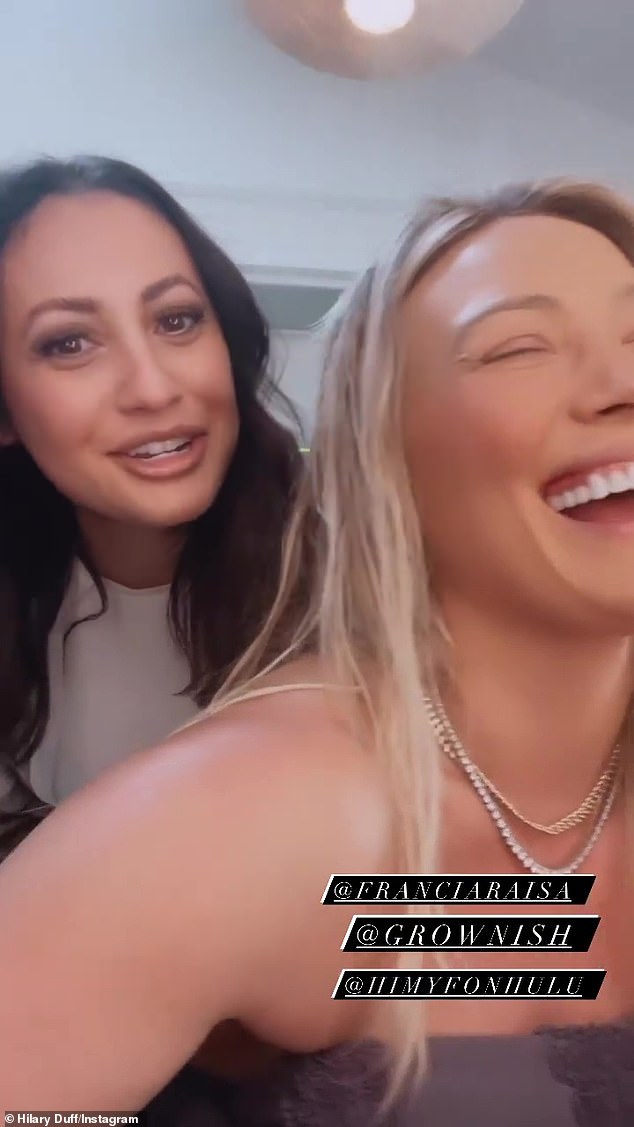 Food chatter: The actresses shared some laughs over Raisa admitting she doesn’t like pickles and that she refused to eat a sandwich Duff offered her with pickles

After admitting she doesn’t like pickles, Raisa said, ‘I don’t want your eaten sandwich, I want a new one sandwich.’

‘You hear how she treats me,’ Duff responds to the camera, before pointing out how Raisa is starring in two shows simultaneously: How I Met Your Father and Grown-ish, which has been airing for four seasons with Yara Shahidi in the lead role.

All the fun banter between the two stars was part of the promotion for How I Met Your Father and their Instagram Live chat later in the day. 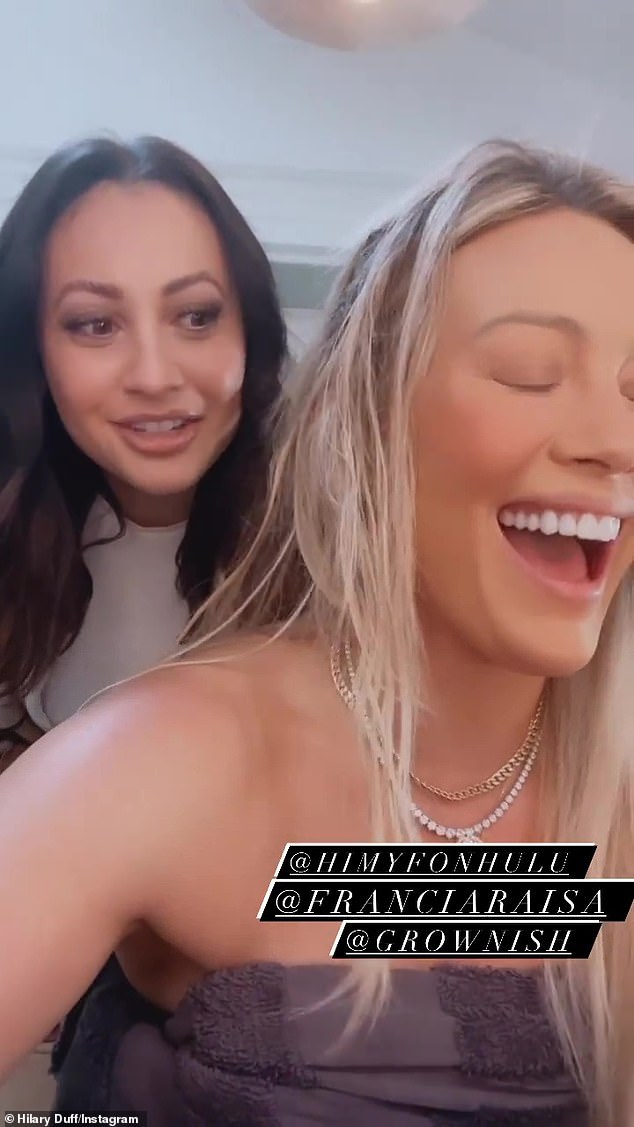 Comedic touch: ‘You hear how she treats me,’ the Lizzie McGuire star jokes 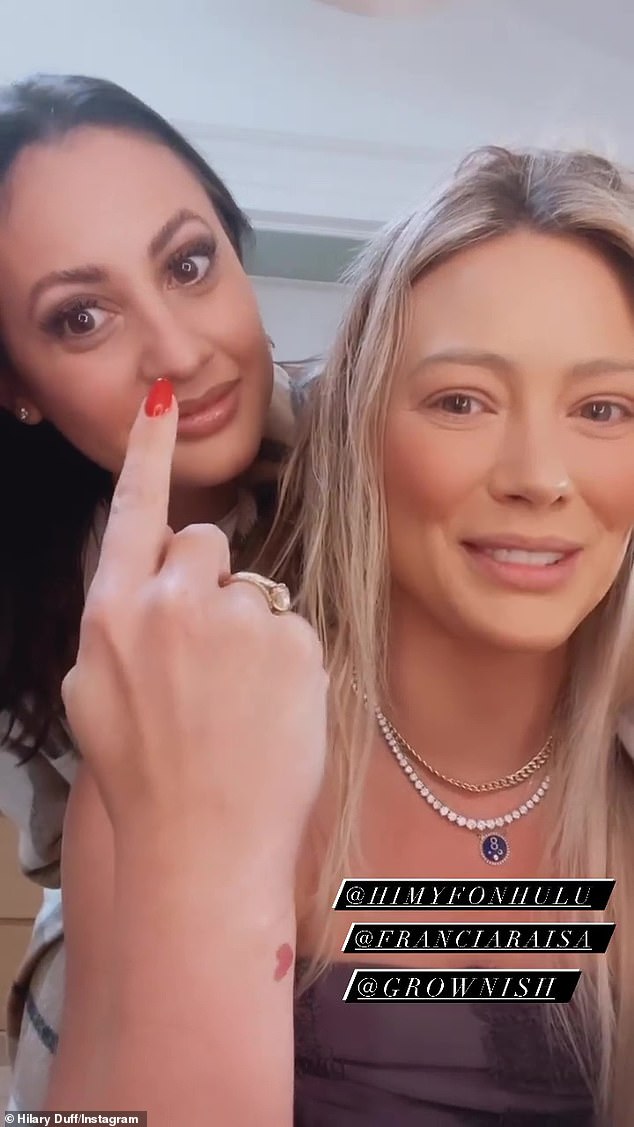 High praise: Duff pointed back at Raisa to share that she is currently starring in two shows simultaneously: How I Met Your Father and Grown-ish, which has been airing for four season