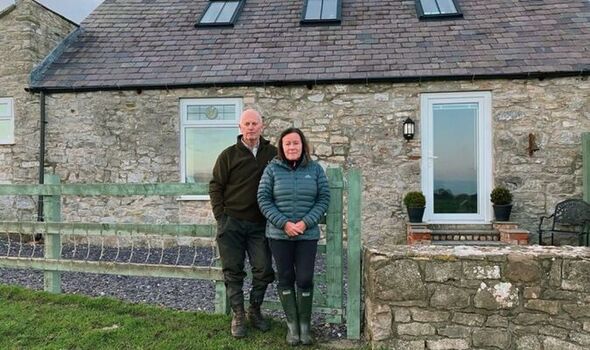 Holiday cottage owners have accused a council of using strong-arm tactics after they were handed a £7,900 bill for following Covid rules.

Ieuan and Rhian Williams say they were made to feel like criminals when they were searched after being summonsed to court last week.

Due to the pandemic, more than half of their bookings were cancelled, and they became liable for costly council tax rather than business rates.

They are having to pay an additional premium because their let is classed as a second home, even though it is a converted horse stable on their own property.

As their annual profits amount to just £4,000, the bill has left the couple from Denbighshire, Wales, beside themselves with worry, reports North Wales Live.

The Professional Association of Self Caterers (PASC UK) said scores of similar cases are arising across Wales and are causing “mental health issues” for affected owners.

Its chairman accused the Welsh Government of “morally reprehensive behaviour” by effectively “fining people” for following Covid rules in 2020.

Ieuan, 66, is worried he and Rhian may have to run their holiday let for two years without profit just to pay their unexpected bill.

“The way the council is acting is disgusting,” he said. “They’re using questionable tactics to extract money that is not due to them because we are awaiting the result of an appeal.”

Rhian, 64, invested her pension pot into the holiday let when she retired as a psychiatric nurse 10 years ago.

The couple converted an old horse stable into a two-bedroom cottage just yards from their home in Marian Cwm, Dyserth.

Its planning conditions included a 28-day limit on continuous residency.

At the time, Ieuan said the council could not be more helpful.

“They even gave us a grant because they were keen to encourage tourism in the county,” he said.

During Covid lockdowns, people were told to stay at home and not to travel (Image: PA)

In an average year, the business turns over £12,000 a year and the couple commits two days a week for changeovers, including cleaning and maintenance.

In 2020, they secured 113 nights of bookings, well above the 70-day threshold they needed to meet to pay business rates rather than council tax.

But 58 nights were cancelled when travel restrictions were imposed during national and local lockdowns in Wales.

Although the couple feels they are being penalised for matters outside their control, they are willing to abide by the adjudication of the Valuations Office Agency, to which they have appealed.

According to Ieuan, this represents three years’ worth of council tax payments; he has been led to believe this is the penalty for failing to meet the 70-day threshold in 2020.

However, as they exceeded the booking threshold in subsequent years – 159 nights in 2021 and 190 nights in 2022—they should not be paying council tax for these years, said PASC UK chair Alistair Handyside.

“Councils can’t penalise you for not hitting 70 days and then penalise you when you do exceed 70 days,” he said. “The legislation is absolutely clear on this.

“Nothing has ever upset the tourism sector as much as this attempt to fine people for complying with the law. It’s morally reprehensible.

“This is an ugly situation that’s only to get uglier. I’m seeing tourism business owners going back to Covid levels of mental health issues because of the way they are being treated.”

A 50 per cent council tax premium is being levied on the couple’s Hafan Haydn holiday cottage as it has been classed as a second home—even though planning conditions include a 28-day limit on continuous residency.

“I was told it counts as a second home because it is furnished,” said Ieuan.

“So I told them I’d empty it. But they said it would still be classed as a second home. So I said I’d demolish it. They said I couldn’t until they sent a buildings inspector here!”

Ieuan and Rhian make around £4,000-a-year from their holiday let to supplement their pensions (Image: North Wales Live)

The couple were summonsed to Llandudno magistrates’ court because a final payment warning arrived while they were on holiday.

After meeting a council officer, they were advised to meet the authority’s council tax officials to discuss payment plans, but the couple wants to wait for the outcome of their VOA appeal.

They are prepared to go to court again.

In a letter to PASC, Wales’ finance minister, Rebecca Evans, acknowledged that, at times in 2020, accommodation providers were unable to let their properties.

But she said demand was high when lockdown curbs were eased and many holiday lets were able to hit the 70-day threshold.

This has been confirmed by the VOA, and PASC’s own data showed Welsh properties were let for an average of 73 nights in 2020–21.

However, some areas were hit harder than others.

At one end of the scale, cottages on Anglesey were let for an average of 90 days in 2020, according to PASC.

The average for Gwynedd just fell below the threshold (69 days), while cottages in Conwy were let for an average of 65 nights.

No figures were available for Denbighshire.

As well as being let for 70 days, accommodation providers must advertise their lets for at least 140 days each year.

In some cases, businesses found this impossible without breaking Covid rules, yet they are still penalised, said Aberconwy Janet Finch-Saunders.

Earlier this month, she wrote to Rebecca Evans asking her to give the VOA more flexibility.

She wants to see clemency for holiday lets who can prove they couldn’t meet the lettings threshold.

The minister has said that local authorities can use discretionary powers to “reduce a council tax liability by any amount or disapply a premium”.

However, the Welsh Government cannot intervene in individual cases, she said.

Ms Finch-Saunders said not all councils will take this approach.

“It has been made clear to me that at least one local authority in Wales is refusing to use its discretion,” she said.

“When you have the VOA also stating its no discretion in applying the Welsh Government’s criteria, it is clear that the discretion needs to come from the Minister for Finance.”

Ieuan is a former Denbighshire Council employee who retired two years ago.

He is reluctant to part with money in the hope it will be paid back if the VOA adjudicates in his favour.

He said he is happy to be taken to court again by the council as he believes he has a solid case.

Having received a discretionary grant during the pandemic, to help cope with lengthy lockdowns, he believes this explains the hard-line stance being taken by the authorities.

“They are hell-bent on getting it back one way or the other. We are absolutely devastated,” he said.

The Welsh Government said a majority of holiday let owners in Wales were able to rent out their cottages for at least 70 days in 2020.

It said it could not intervene on behalf of those who did not.

A spokesperson said: “We fully recognise what a difficult time this period was for businesses, and during the pandemic we provided more than £2.6bn in funding, protecting more than 160,000 jobs.

“This money was intended to help mitigate the impact of national and local restrictions in place at various times, which were necessary to protect public health.

“The letting criteria are an essential part of developing a fairer housing market and ensuring that second home owners and self-catering businesses are making a fair contribution to their local communities.

“Despite the situation at the time, the majority of businesses were let for at least 70 days.

“Businesses were also able to operate when restrictions allowed and demand was known to be high.

“Properties are classified by the Valuation Office Agency and we’re continuing to work with the agency to monitor the ongoing impact of the pandemic on the classification of second homes and holiday lets.

“While we are unable to intervene in individual cases, local authorities have discretionary powers to reduce council tax bills and affected businesses may wish to get in touch with their council to ask whether support is available.”