Cheer we go! Ecstatic Holly Willoughby triumphantly throws her hands in the air as she watches Emma Raducanu WIN on her Centre Court debut at Wimbledon

Holly Willoughby was overcome with joy when Emma Raducanu won on her Centre Court debut against Alison van Uytvanck during day one of Wimbledon on Monday.

The presenter, 41, looked typically chic in a white blouse featuring pink petal prints, which she layered beneath a cream jacket while donning Wayfarer black shades.

Flashing a dazzling smile while throwing her hands into the air amid Emma’s victory, she was joined by her husband, Daniel Baldwin, as well as pal Phillip Schofield. 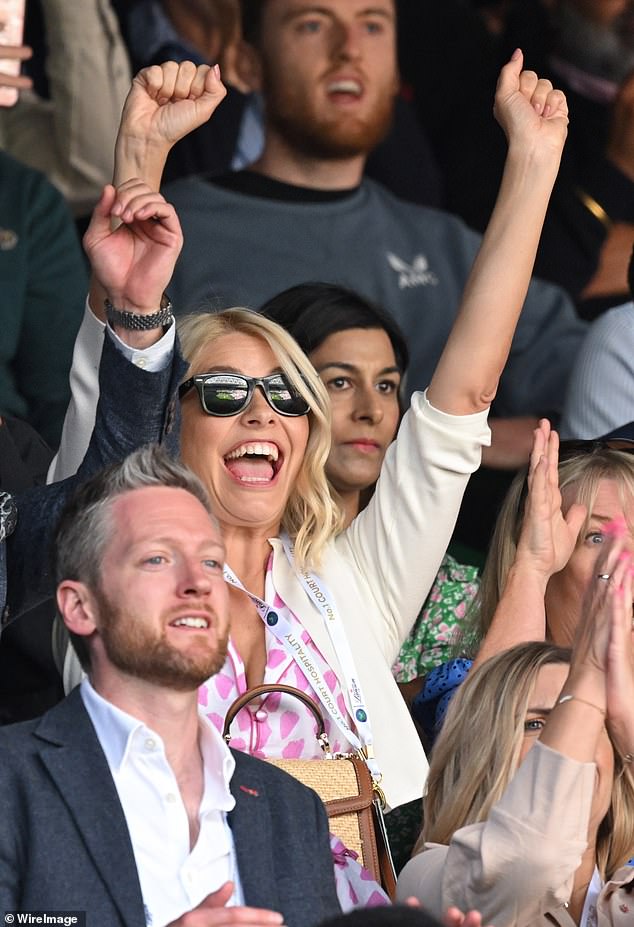 Woohoo! Holly Willoughby was overcome with joy when Emma Raducanu won on her Centre Court debut against Alison van Uytvanck during day one of Wimbledon on Monday

Emma put her troubled build-up behind her as she defeated Alison to reach the second round of Wimbledon.

The 10th seed’s participation in the tournament was in doubt until the weekend because of a side strain suffered at the WTA Tour event in Nottingham three weeks ago.

Coupled with the huge attention on the US Open champion’s homecoming and a tricky opponent, this was a major test, but Emma passed it impressively by claiming a 6-4 6-4 victory.

Centre Court was only half full when she took her first steps on it as spectators took a break following Novak Djokovic’s victory, but she received an enthusiastic welcome from those left. 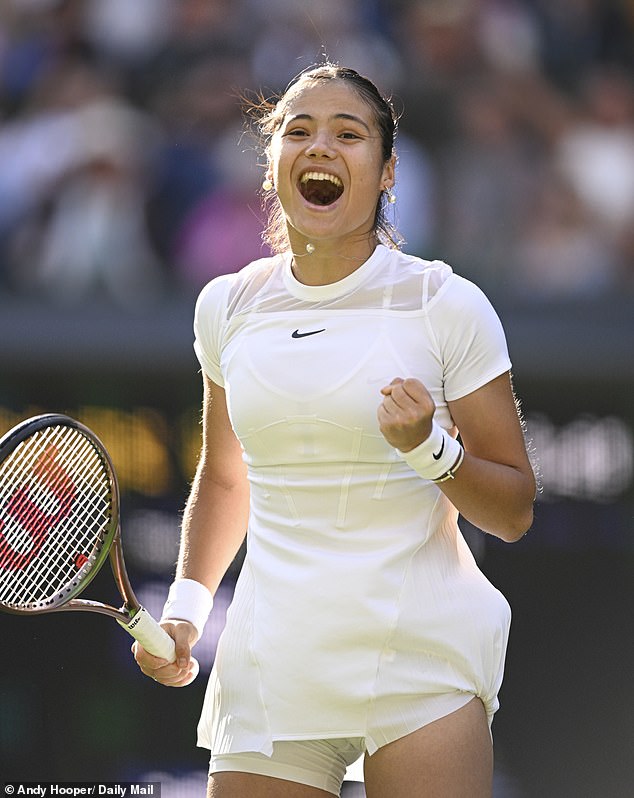 Champ! Emma put her troubled build-up behind her as she defeated Alison to reach the second round of Wimbledon

While the teenager had given an upbeat assessment of her fitness and mindset at her press conference on Saturday, the stresses of a match, particularly such a high-profile one, are inevitably different to practice.

But there were no early causes for alarm as Emma threw herself into serves and groundstrokes, missing two break points in the opening game but then saving three on her own serve as the first two games lasted a gruelling 17 minutes.

Alison was certainly not the kindest draw Emma could have been given, with the 46th-ranked Belgian having won a grass-court title last weekend – albeit at second-tier level – in Italy, while she upset defending champion Garbine Muguruza on her way to the fourth round in 2018. 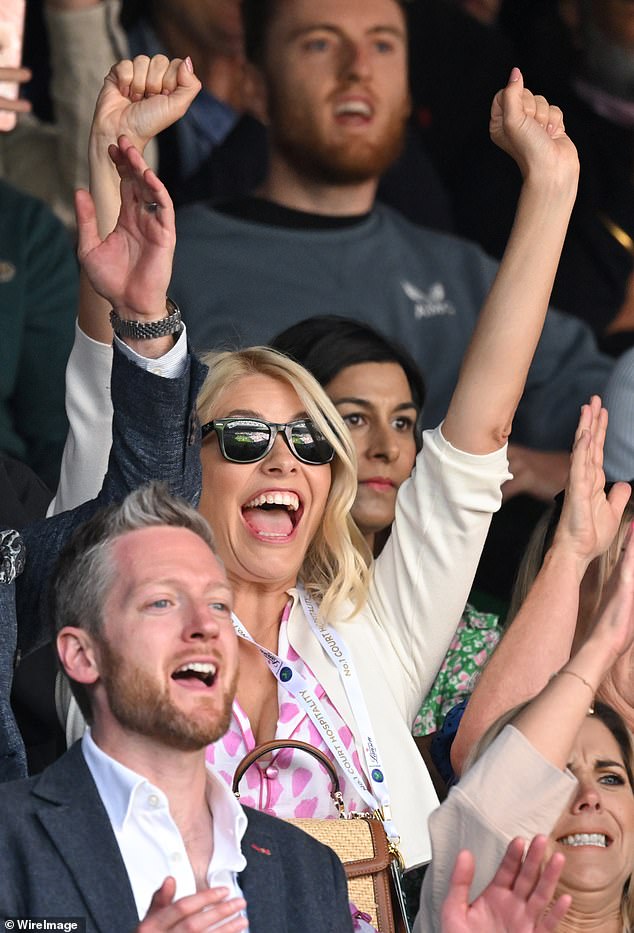 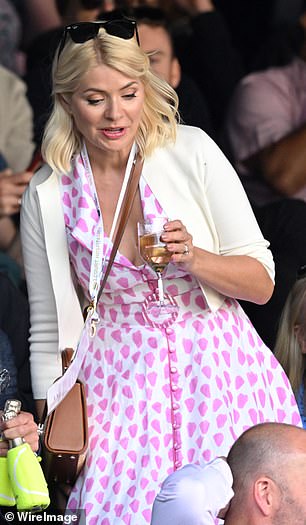 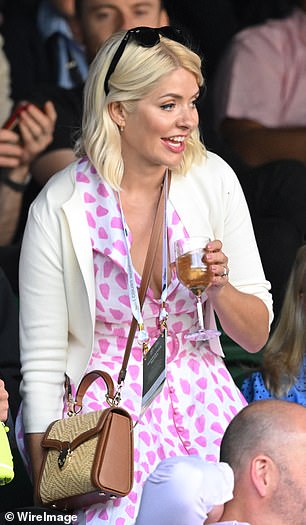 Fashion forward: She layered the number beneath a cream jacket while donning Wayfarer black shades 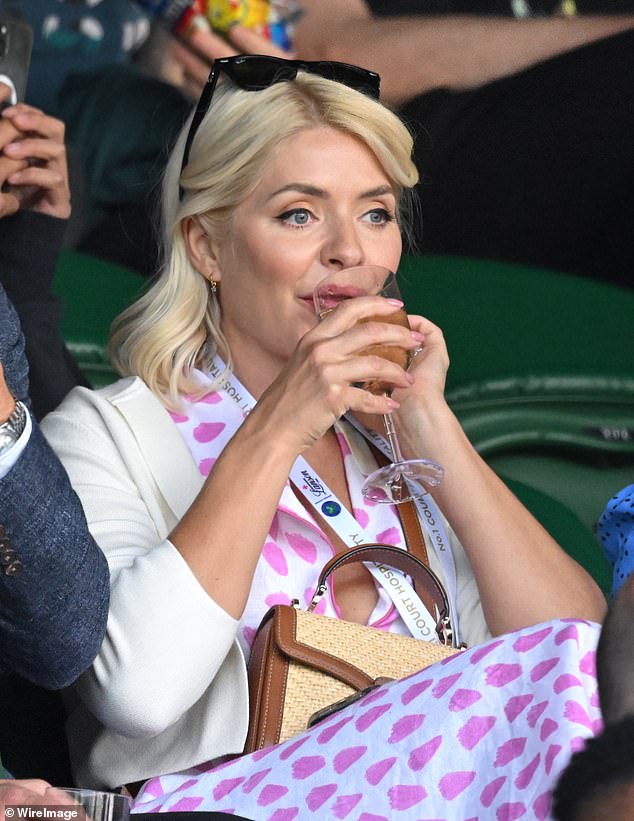 This’ll do: The presenter enjoyed a glass of complimentary wine as she took in the action

Emma had managed just seven games before retiring in Nottingham so negotiating this hurdle in any fashion was all that could be asked of her.

A couple of fizzing backhands, coupled with a poor volley and double fault from Alison, gave Emma the first break in the seventh game.

She promptly dropped serve to love but then broke again and dug in at just the right moment to save two more break points and take the first set.

There were glimpses of the player who swept all before her in New York but Emma has discovered, like countless others before her, that being the hunted is a very different proposition to being the hunter. 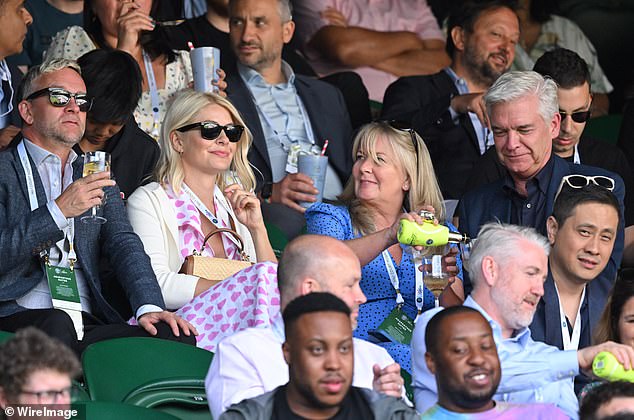 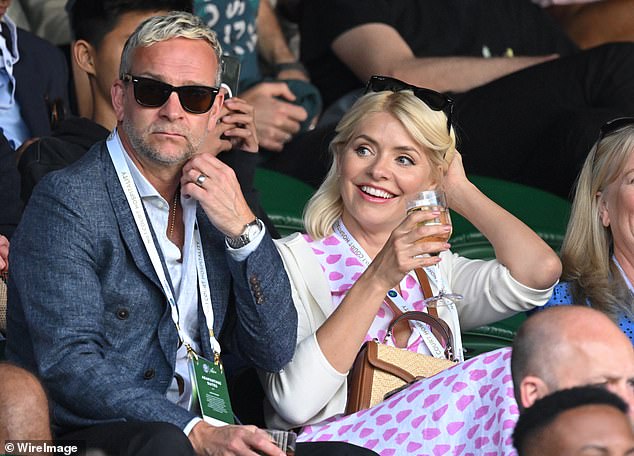 Side by side: Holly and husband Dan let their hair down at Wimbledon on Monday afternoon

She missed six break points in the opening game of the second set and it looked like that might cost her when Alison played two of the best points of the match to break for 3-1.

Back came Emma, though, breaking back to love, and another ill-timed double fault from Alison on break point at 4-4 gave the teenager the chance to serve for the match.

Emma proved herself to be an excellent front-runner at Flushing Meadows and a volley placed deftly into the open court on her second match point prompted a leap of delight from the British number one. 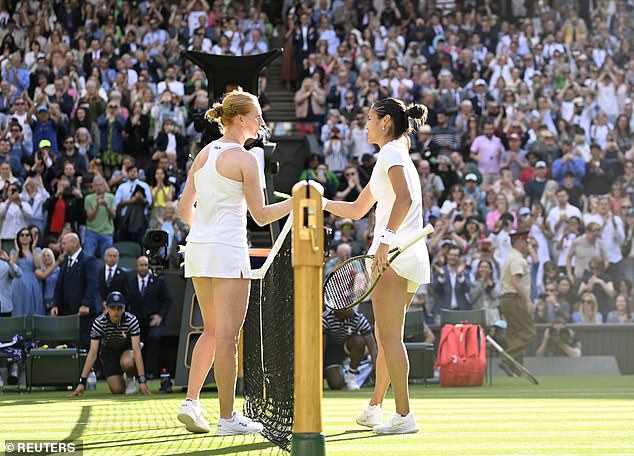