Homes Under the Hammer buyers revive period home in one month with sleek £6.7k renovation

Homes Under the Hammer visited Wolverhampton in a recent episode, where Martel Maxwell looked around a modest mid-terrace home just half a mile away from the popular city centre and university. On her first visit to the property, the presenter explained that the property had plenty of potential, adding that: “For a low guide price you’re getting a solid house, with character, in a good location.” At auction, the house was purchased for £73,000 by Jamal, who handed the property to his sons Jem and Ali to “do the work on his behalf”.

The red-brick property was located in the centre of a block of terraced houses and had a run-down appearance from the outside.

As well as some minor rendering needed on the exterior of the house, the inside was stripped back to almost bare and in-need of a full refurbishment.

Despite the property’s neglected appearance, presenter Martel Maxwell was quick to highlight the positive features which made the Victorian building stand out.

She explained that the property had “decent brick work, original sash windows and some lovely decorative features around them”.

The period-windows were double-glazed too, bringing both “character and practicality” to the house. 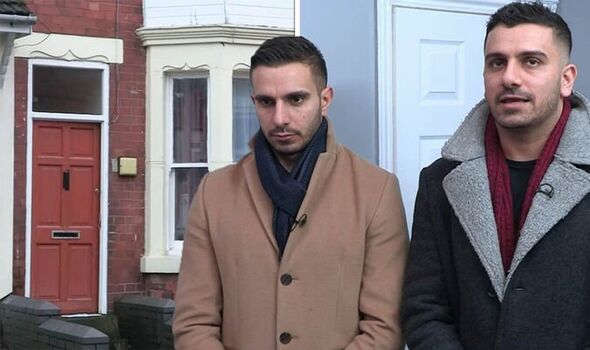 Martel said: “The hallway has got a really nice ceiling height and already it feels quite solid. Into the reception room and something worth pointing out are these corbels – a Victorian feature well over one hundred years old.”

A small, thin kitchen with a toilet cubicle almost within the room had the potential to be reconfigured according to the presenter, who explained that the buyers had many “great options” to consider for their renovation.

Other areas of the home that needed a lot of attention included the main bathroom which was old and dirty, along with the “very damp” wall in the reception area.

The three-bedroom property also had two larger double rooms upstairs and an awkward third room which is located off of the second room at the back of the house.

The kitchen was bare and run down (Image: BBC)

Without even viewing the house before the auction, brothers Jem and Ali got stuck into redeveloping the Wolverhampton home after their dad, Jamal purchased it at auction for more than three times the guide price.

The brothers were tasked with doing the work on the house on behalf of their dad, working as a “family team” who own six fish and chip shops by trade.

Speaking to Martel at the Victorian terrace, the brothers shared their plans to refurbish and market the property as a two-bedroom rental by fixing the “odd-layout” and removing the third bedroom upstairs.

They planned to replace the kitchen and bathroom, lay new carpet, add new double glazed windows where necessary and replace all the doors in just five weeks – all with a maximum budget of £20,000.

The Victorian home had cobels and other period features kept intact with the modern refurb (Image: BBC)

The front of the house was re-rendered for the future tenants to enjoy (Image: BBC)

Despite “breaking the gold hammer rule” and not viewing the property first, the determined pair successfully completed the full renovation in just four weeks, well under budget.

Upon her return to the transformed house, Martel saw a high-quality modern finish throughout every room, with the unique period features still intact – all done for just £6,700

The brothers had installed a smart white kitchen and a bright grey-tiled bathroom suite, with the popular colour scheme continuing into the reception rooms and hallway.

Upstairs, the property looked brand new with clean white walls and grey carpets, though no structural changes were made to remove the third room.

The damp issue had been resolved by replacing the guttering and installing a new central heating system.

A surprise update to the outside of the mid-terrace home had also been done with a re-render to replace the red brick rental-home with white paint and green details.

Martel described the project as “on time, within budget and spotlessly clean”, with the pair having spent less than £7,000 on the full refurbishment.

Two local property experts were invited to value the property in February 2020.

To rent as intended, the property experts estimated that the brothers could advertise the house for between £500-£575 per calendar month on the rental market, giving them a decent return of £8.6 percent on their £79,700 investment.

The pair revealed that they already had tenants lined up who had agreed to pay £775 per month to rent the property, giving them an impressive 11.6 percent yield.

Homes Under the Hammer is available to stream on BBC iPlayer.