A former boy scout is set to scoop £300million as Canadian bidders close in on the emergency home repair business that he co-founded.

Richard Harpin, the boss of FTSE 250 group Homeserve, which fixes leaky pipes and faulty boilers, will bag the mammoth sum if a takeover by Toronto-based Brookfield Asset Management goes through.

A deal is said to be near, valuing the company at just over £4billion, which would be one of the largest private acquisitions of a UK firm this year. 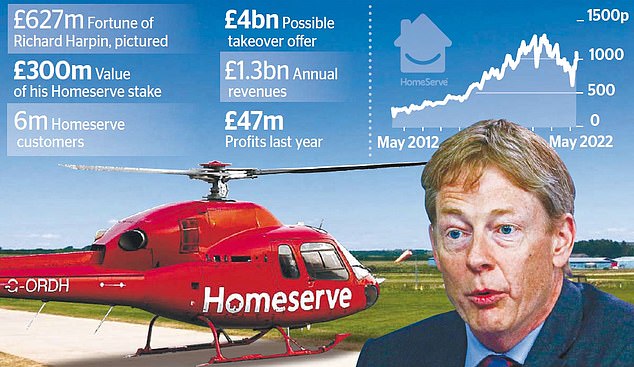 Pay out: Richard Harpin (pictured), is Homeserve’s founder and second-largest shareholder with a 7.4% stake, leaving him in line for a £300m windfall if the takeover is signed off

The price tag would value each Homeserve share at around 1200p, which, while a premium to its current level, is lower than the all-time high of 1365p that was reached in August 2020.

Final details of the agreement are being hammered out and could be announced in the coming days, according to Bloomberg. However, discussions are still going on.

Brookfield has until 5pm next Thursday to make a firm offer after the deadline was extended last month to allow more time for negotiations.

Harpin, 57, is Homeserve’s second-largest shareholder with a 7.4 per cent stake, leaving him in line for a £300million windfall.

He is estimated to have a fortune of £627million, according to The Sunday Times Rich List. His wife Katherine will pocket around £193million from a 4.8 per cent holding.

A FTSE 250 property group has swooped on a smaller rival as consolidation in the sector gathers steam.

Secure investors will receive 3.3 LXi shares for each share they own, and the deal values it at just under £1.5billion.

The tie-up creates a company with assets worth £3.9billion.

LXi investors will own 53 per cent of the group while Secure’s will control the remaining 47pc.

After dabbling in several ventures including selling fishing tackle and jewellery, Harpin set up Homeserve in 1993 alongside Jeremy Middleton, whom he met while working in the marketing department of consumer goods giant Procter & Gamble.

The father of three became known for his unusual commuting style from his home near York to the company’s offices 140 miles away in Walsall, which involved switching between a chauffeur-driven car and his helicopter.

He also retained links to scouting, becoming an ambassador for the association in 2010 and providing £50,000 to help launch an entrepreneur’s badge to encourage interest in business.

Brookfield’s interest came to light in March when it announced it was considering an offer.

Homeserve provides repair and maintenance services in the UK, the US and Europe as well as helping to install heating, electrical and plumbing systems.

Business boomed during the pandemic as people spent more time at home due to lockdown measures.

In the six months to the end of September 2021, the company raked in a profit of £18.9million, which was an 86 per cent increase year-on-year as it continued to benefit from strong demand.

The little known loophole that lets you beat the ULEZ charge