House of the Dragon: King Viserys Targaryen prepares to marry off his daughter Rhaenyra

King Viserys Targaryen (Paddy Considine) tries to form a royal alliance with a royal wedding… as his health continues to fail in Episode 5 of HBO’s House of the Dragon.

The trailer teased some tension and an all-out brawl at the wedding, while the former Hand of the King, Otto Hightower (Rhys Ifans) tells his daughter, Queen Alicent (Emily Carey) that there will be war if Rhaenyra takes the Iron Throne. 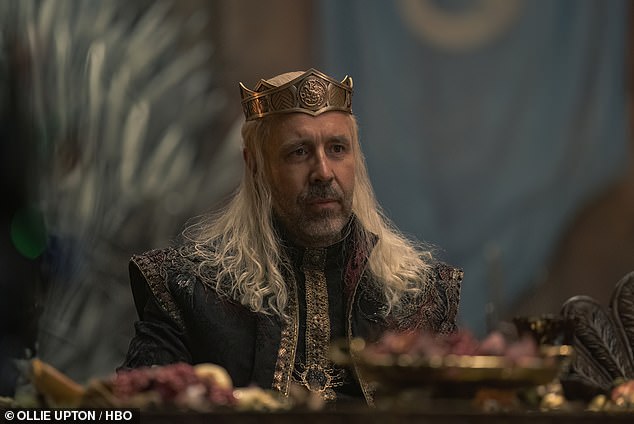 Alliance: King Viserys Targaryen (Paddy Considine) tries to form a royal alliance with a royal wedding… as his health continues to fail in Episode 5 of HBO’s House of the Dragon 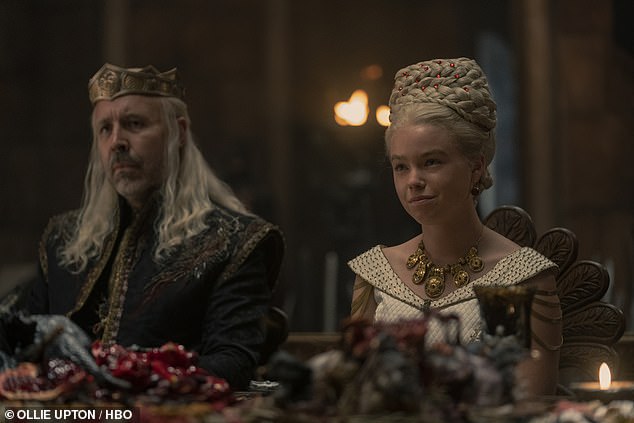 She rides off on her white steed and leaves the man behind when she finds her husband Daemon (Matt Smith).

She asks what he’s doing here and ask if he wants to consummate the marriage finally, as she reveals she heard he called her uglier than a sheep.

He scares off her horse, throwing his wife to the ground as he stands over her but walks away.

‘I knew you couldn’t finish’ she screams, before Daemon picks up a large rock and walks back to her.

The episode cuts to the sea, where the King is sailing with his new Hand of the King, Lord Lyonel Stokes, as the King throws up over the side of the ship.

‘The time is come, Alicent. Either you prepare Aegon to rule or you cleave to Rhaenyra and you beg for her mercy,’ Otto says before embracing his daughter and leaving on horseback.

King Viserys and Rhaenyra are now riding in a carriage to Driftmark, as the new Hand is angered that Corlys hasn’t greeted the King himself, but Viserys wants to, ‘just get on with it.’

Back in King’s Landing, Alicent strikes up a conversation with Larys Strong (Matthew Needham), the son of the new Hand of the King, Lyonel Strong.

He is seen clutching a cane, saying she might be in need of an ally, when Alicent asks him to state his purpose.

He wonders if Rhaenyra can be trusted because she is not well, though he says he may be mistaken.

He tells her that the Grand Maester brought her a tea, at the direction of the King, which clearly troubles Alicent.

She tells him that Rhaenyra set sail with King Viserys to Driftmark, and he reveals that he is happy to have been wrong about Rhaenyra being ill… but Alicent is clearly still troubled by this news.

Back at Driftmark, Viserys and Corlys finally meet, as Corlys bends the knee for him… and the King lets out a few coughs.

Rhaenys (Eve Best) arrives as Corlys congratulates Lyonel with being named the new Hand of the King.

Corlys tells Viserys that Lady Rhea has died, as they reveal it was a ‘hunting accident’ and she was thrown from her horse.

Viserys changes the subject, proposing a marriage between his daughter Rhaenyra and his son Laenor.

Corlys wants to know how the succession will be handled, and he insists that Rhaenyra will ascend to the Iron Throne.

‘She and Ser Laenor’s firstborn child, regardless of gender, will inherit the Iron Throne from her,’ Viserys says.

‘Can I presume that, in keeping with Westerosi tradition… Their children would take their father’s name? That they would be born Velaryons?’ Corlys asks.

‘Surely, Lord Corlys, you are not proposing the Targaryen dynasty end with my daughter simply because she is a woman?’ Viserys asks.

‘Upon their birth, Ser Laenor and Rhaenyra’s children shall take their father’s name, Velaryon… In keeping with our traditions.

‘However, at such time when their firstborn ascends the Iron Throne, he or she will do so bearing the name Targaryen. Dragons will rule the Seven Kingdoms for the next hundred years, just as they did the last,’ Viserys says, as Corlys finds it an ‘equitable compromise.’

The episode cuts to Rhaenyra walking along the beach with her future husband Laenor, telling him, ‘In truth, if it had to be someone, I’m glad it is you. I know this union is not what you would choose.’

‘I hold nothing against you, cousin. No, I– rather… Dare I say it is a matter of taste?’ he says.

She tells him that she prefers roasts duck to goose and she finds goose too greasy for her taste.

‘I know that whatever agreement being struck up there will not change your appetites, nor will it change mine,’ she said.

He asks what she proposes and she says, ‘That we perform our duty to our fathers and to the realm and when it’s done… Each of us dines as we see fit,’ which causes Laenor to smile.

Corlys and Rhaenys talk in their chambers and he wants to give her the Iron Throne, what was rightfully hers.

‘I never wore the crown because the realm would not have it so,’ she tells him as Corlys insists he would ‘remedy that.’

She says she has put it all behind her as we go back to Laenor… who is seen with his homosexual lover Ser Joffrey Lonmouth (Solly McLeod).

Laenor says this couldn’t have worked out better because she has a paramour of her own as they wonder who it is.

Rhaenyra is back at the boat talking with Criston (Fabien Frankel), who asks him to run away with him and see the world together.

She insists that she must marry since it is her duty but she wants to continue seeing Fabien, but he thinks he’ll just be his ‘whore.’

Criston freaks out since he broke his chastity vow but he thinks if they married he might be able to restore his name.

They return to King’s Landing and Criston is told he’s been summoned by the Queen, who sends her maids away when Criston enters.

She says she has concerns about Princess Rhaenyra, telling him there has been a rumor, but she doesn’t say the rumor is about Rhaenyra and Daemon.

He tells her, ‘It happened, your Grace. The sin you allude to. I committed it,’ telling her he broke his chastity vow.

‘My oath has been broken. I have dishonored myself. I deserve no consideration. But if… As a clement Queen, you are inclined to pity… I would ask only this… That rather than gelding me and having me tortured… You would sentence me mercifully to death,’ he tells her.

‘Thank you for your honesty, Ser Criston. You may go,’ Alicent says, as Criston takes his sword and leaves without another word, leaving Alicent very confused.

The Grand Maester tells the King to rest and he will bring the leeches as another maester gives him something to help him sleep.

‘Will I be remembered as a good king, Lyonel? What will they say about me when the history is written?’ Viserys asks.

He says he hasn’t fought or conquered as Lyonel says some might consider that good fortune.

‘Is it not better to live in peace than to have songs sung after you are dead?’ Lyonel asks.

‘Perhaps. But there is a part of me wishes I’d been tested. I often think that in the crucible, I may have been forged a different man. Many that are tested, only wish to have been spared it,’ Viserys says before drifting off to sleep.

The move to marry Rhaenyra to Laenor comes after King Viserys shot down Corlys’ proposal for Viserys to marry his 12-year-old daughter Laena (Nova Foueillis-Mosé).

Instead, he decided to marry Alicent Hightower, a decision which caused Corlys to join forces with the King’s estranged brother Daemon (Matt Smith) as they fought in the Stepstones.

The idea to wed Rhaenyra to Laenor was suggested by one of his trusted advisors Lord Lyonel Strong (Gavin Spokes), which he seemingly took to heart. 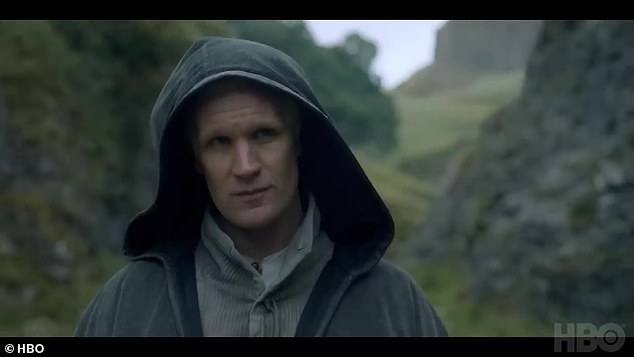 Daemon: Instead, he decided to marry Alicent Hightower, a decision which caused Corlys to join forces with the King’s estranged brother Daemon (Matt Smith) as they fought in the Stepstones

Ironically, it also comes just after King Viserys told his daughter she could choose her own mate… which lead to her having an incestuous tryst with her uncle Daemon… and also taking Ser Criston Cole (Fabien Frankel) to her bed.

Rhaenyra swore to both her father and her best friend, Queen Alicent, that nothing happened with Daemon… despite a witness account from one of Otto’s spies.

The episode also comes just after King Viserys removed Otto Hightower as his Hand of the King, after Otto tells Viserys about Rhaenyra’s affair with Daemon. 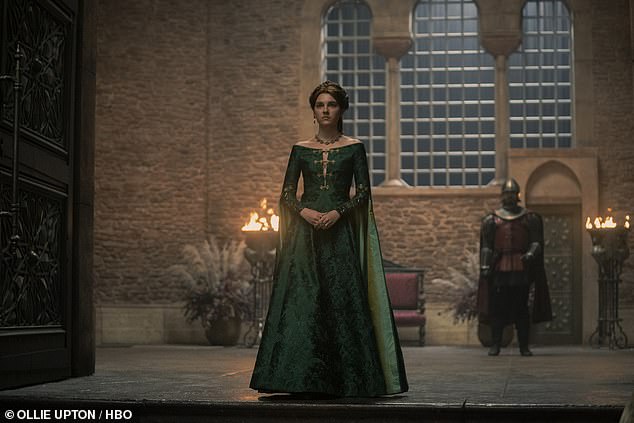 Swore: Rhaenyra swore to both her father and her best friend, Queen Alicent, that nothing happened with Daemon… despite a witness account from one of Otto’s spies

Otto is seen in the trailer telling his daughter Queen Alicent that the realm will go to war if Rhaenyra is named the Queen of Westeros.

He tells her to prepare her son Aegon to rule at the end of the trailer for Sunday night’s new episode.

House of the Dragon was already renewed for a second season, though co-showrunner Miguel Sapochnik has announced he will be leaving the show. 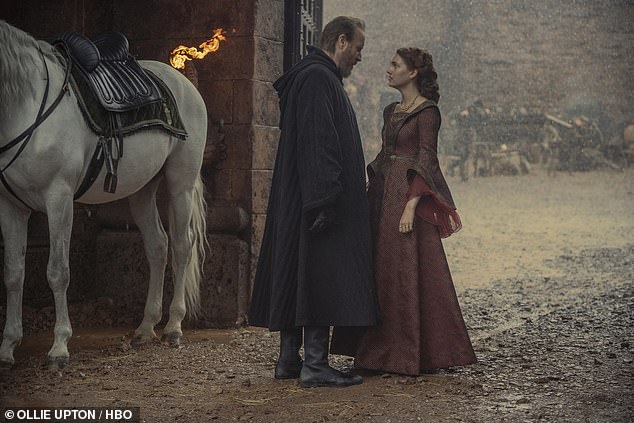 War: Otto is seen in the trailer telling his daughter Queen Alicent that the realm will go to war if Rhaenyra is named the Queen of Westeros