Six-time snooker world champion Ronnie O’Sullivan surged into another semi-final this morning as he brushed Stephen Maguire aside. The world No1 led 11-5 overnight, and completed final breaks of 71 and 126 to secure his place in the last four in just 19 minutes. O’Sullivan, chasing a record-equalling seventh Crucible title in the modern era, will now face either Judd Trump or Stuart Bingham for a place in the final.

A number of snooker stars have called for the World Championships to be played over two venues — rather than just at the Crucible — to avoid the cramped two-table set up.

World Snooker Tour chief Barry Hearn confirmed this week that talks have begun over the possibility of building a new, bigger and more modern Crucible in Sheffield.

Mr Hearn, father of boxing promoter Eddie Hearn, has not always seen eye to eye with O’Sullivan, namely at the 2016 Welsh Open.

The Rocket faced Barry Pinches in the opening round of the tournament, held at Cardiff’s MotorPoint Arena, and refused the opportunity to make a 147. 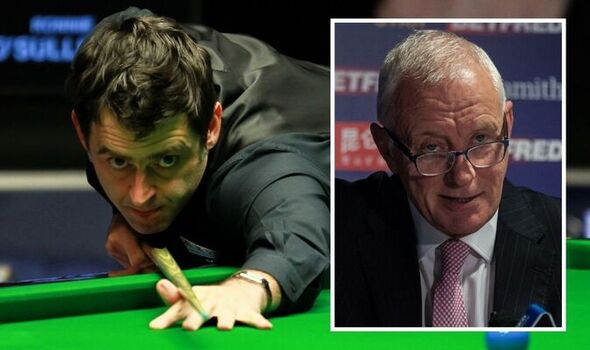 The Rocket refused to make a 147 in protest at the prize money for doing so. (Image: GETTY)

O’Sullivan in action at the World Snooker Championships in Sheffield. (Image: Reuters)

The maximum break would have pocketed O’Sullivan, but he scoffed at the prize, branding it “too cheap”.

His comments went down like a lead balloon with Mr Hearn, as he branded O’Sullivan’s refusal “unacceptable” and “disrespectful”.

Mr Hearn wrote on Twitter at the time: “Most people don’t understand [£10,000] not meaning anything! Fact is we have a lot of 147 breaks and the prize money reflects that.

“It’s a shame that punters who buy tickets and TV fans who watch did not have the pleasure of seeing a maximum break.

“Players have a duty to the fans to deliver the best standard and entertainment they can.

“Anything less than playing to your best ability is unacceptable and disrespectful to the paying public.

“This is not crime but a shame.”

O’Sullivan responded to Mr Hearn’s comments while speaking to the BBC later in the tournament.

He said: “I was just having a bit of fun, you see. When you get to 40 and you’ve been doing this for 25 years, you have to start to enjoy it at some point.

“It was just a bit of fun, a bit of a laugh, I just hope everybody sees it in that way. I don’t see why we have to take everything so seriously these days.”

Asked if he had deprived paying fans of seeing him make a 147, he said: “If you had told me before the game I was going to make a 146 and do that, they’d have probably bought a ticket on the back of that.

“And if it’s disrespectful, then if anyone else can go and put a performance in like that, there’s my cue, there’s my chalk, there’s my waistcoat — tell them to go and do it.”

O’Sullivan has pocketed more prize money than anyone else on the snooker circuit. (Image: GETTY)

O’Sullivan spurned the chance of a maximum break again the next year at the 2017 World Championship, a week after Mr Hearn had ruled a return to previous big payouts for 147 breaks.

Mr Hearn said: “The fact is that a 147, whether we like it or not, and we can be romantic about it, isn’t as significant as it was in the old days, because we have so many of them.

“But if a professional player who is there, not just to win games, but to play to the best of his ability for whatever reason either turns down or doesn’t try for one, then I am disgusted with their lack of professionalism.

“If this game is only about money, if it’s just about a few bob, in a world where the prize money has changed from £3.5million to £12million and greedy people still can moan, frankly they should get out of the sport.”

According to CueTracker, O’Sullivan has amassed more than £12million in prize money, a staggering £3million more than any other player on the circuit.

Ronnie O’Sullivan bids for a place in the World Championship final at 2:30pm on Friday.

Coverage is available on BBC Two.