How to build your own BBQ: Tips and tricks from the experts

Every griddle helps! Save by building your own barbeque – here’s how to do it successfully and cheaply

This summer a record number of people will build their own barbecue to save money, but experts say they must consider their favourite dishes before starting.

Mike Edwards, builder and owner of website DIY Doctor, says: ‘Think backwards. Consider the food you are going to put on the grill so you can calculate the size required.’

He adds: ‘This year, there seems to be more people than ever wanting to put up a permanent brick barbecue. It is a surprisingly easy task and ideal for those who like entertaining family and friends. But make sure to pick a sunny part of the garden.’ 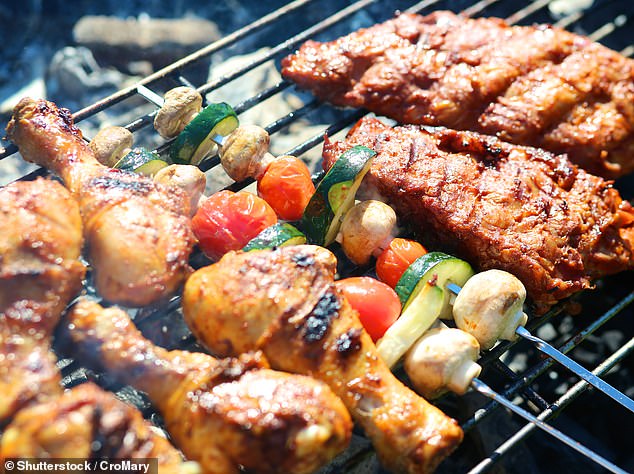 Food for thought: Traditional charcoal or wood chips are preferred as the fuel for an authentic barbecue rather than a gas cooker

Detailed building plans are available on websites such as DIY Doctor, but barbecue assemblers will also need basic tools such as a spirit level and trowel.

Edwards says builders need not bother with a fancy jointing iron to smooth out mortar between bricks, but they can use a bit of garden hose.

Before starting the project, it is necessary to establish a strong foundation – for example, the laying of a dozen old slabs.

Edwards believes a budget of about £100 for a hundred £1 bricks is the main requirement. Plus four bags of sand and a bag of cement – costing a total of £17 – to be mixed as a mortar.

There is a lot of guidance on laying bricks on the internet. Edwards says: ‘Do not waste your money going to a DIY store, but use a builders’ merchant – a local outfit or someone like Jewson or Travis Perkins – as they are not only cheaper, but will be happy to give expert advice.’

Farmer Simon Dyer believes ‘wombling’ for scrap metal to make a barbecue is another cost-effective way.

The former winner of ITV show BBQ Champ says that with enthusiasm, anyone can enjoy the rewarding job of building their own barbecue.

Dyer, from Tickenham in Somerset, says: ‘Think about the food you want to eat – it need not just be about hotdogs and beef burgers.

‘I enjoy international dishes such as Korean ‘fire meat’ bulgogi – marinated thin slices of pork or beef that have been grilled.’

He adds: ‘Rather than wasting hundreds of pounds on fancy equipment that rusts, try wombling for bits and pieces.’

Dyer often grills on an old stainless steel washing machine drum which he has turned into a fire basket. This is put into an old metal oil barrel and turned into a so-called ‘ugly drum’ that is used to cook dishes.

Oil barrels and old washing machine drums can be picked up for £20 on trading websites such as eBay-owned Gumtree and Facebook Marketplace. Websites such as YouTube show you how to make the ugly drums.

An alternative for those looking to bake in the garden – perhaps preparing chicken dishes – is a tandoori oven.

You will need a £20 steel bin, a handful of fire bricks (costing £2 each), a £20 terracotta plant pot, a £5 bag of gardeners’ vermiculite and £3 of sand – plus an angle grinder for cutting. Websites such as Loops Kitchen UK show you how to build such an oven.

As a rule of thumb, traditional charcoal or wood chips are preferred as the fuel for an authentic barbecue rather than a gas cooker.

Many make the mistake of putting meat over flames, burning the outside of the meat while the inside remains raw, rather than letting embers burn down before cooking.