'I made my life a living hell': Janet Devlin admits competing on The X Factor was 'terrifying'

Janet Devlin has claimed her stint on The X Factor aged 16 was ‘terrifying’ since she felt unable to talk about online trolling due to a lack of mental health ‘dialogue’.

The singer, 27, admitted how competing on the ITV talent show in 2011 was the ‘hardest time of her life’, as she faced vicious comments from online trolls.

Following a string of failed suicide attempts as she battled an alcohol addiction, the sober star relived her her booze hell while filming a candid BBC documentary, Young, Female And Addicted, which will air on Monday. 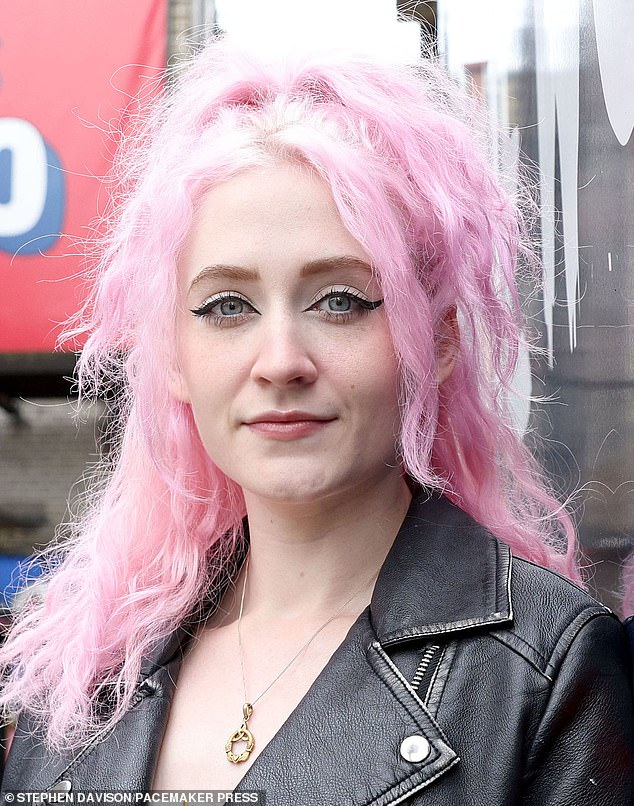 Candid: Janet Devlin has claimed her stint on The X Factor aged 16 was ‘terrifying’ since she felt unable to talk about online trolling due to a lack of mental health ‘dialogue’ (pictured in 2022)

She explained in the episode: ‘I was just 16 when I appeared on The X Factor and suddenly became known to so many people.

‘And though I didn’t realise it then, within four years I would be an alcoholic. Thankfully, I’m in active recovery.

‘You know, if I was to open up in those days and say, “Oh, I’m really struggling, I actually really need help,” or just admitting at the time that I really was struggling to, you know, even be alive, the dialogue around mental health wasn’t there.

‘So I just never said it. Kept it private, kept it buried deep down. 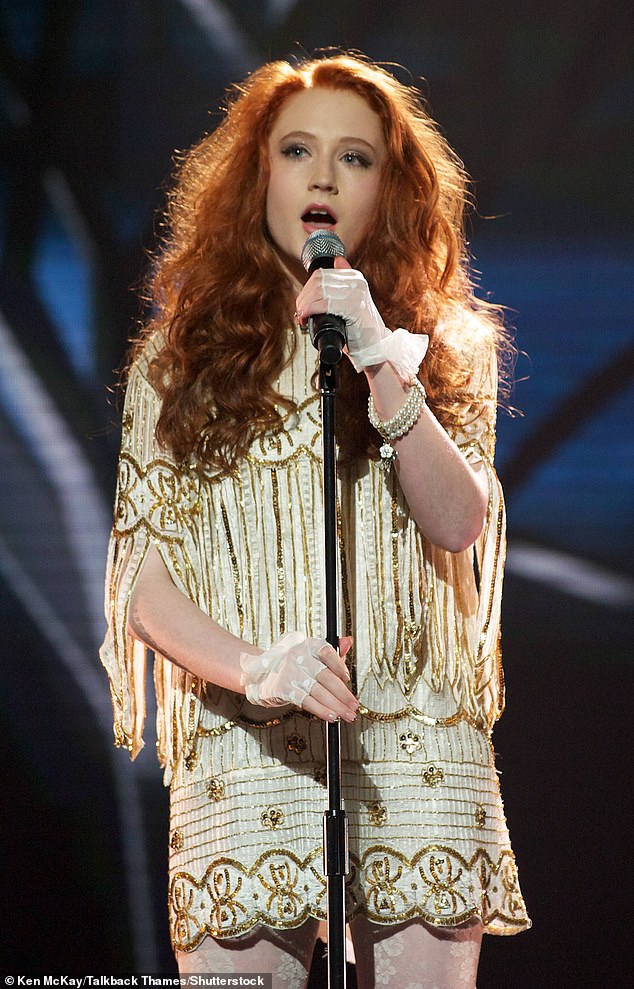 Oh no! The singer, 27, admitted how competing on the ITV talent show in 2011 was the ‘hardest time of her life’, as she faced vicious comments from online trolls (pictured in 2011)

‘My fans have been incredible through my continued journey out of addiction. For me, The X Factor was in equal parts the best decision of my life and the hardest part of my life.’

A representative for The X Factor has been contacted for comment by MailOnline.

As well as talking about her own demons, Janet’s mum Pat revealed she feared the phone call that would say her daughter was dead.

And her manager Rick Chambers said she would hide bottles in a bin down the street and he’d find sick around the house after her benders.

Janet, from Gortin, Co Tyrone said that she thought the answer to her problems was turning to drink.

She continued: ‘At the time of leaving the show and doing all of the gigs and touring and travelling, I had good money at the time. I drank it all. 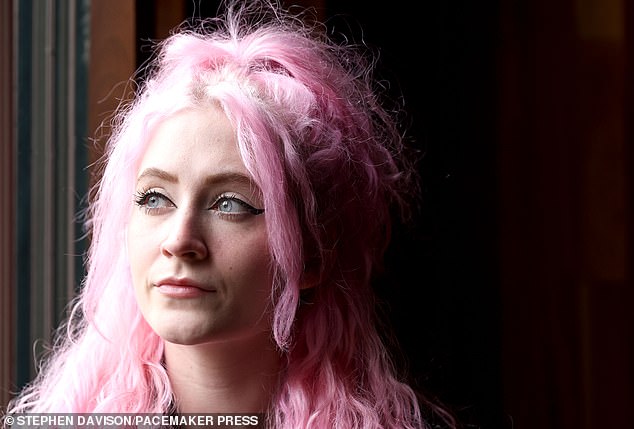 Brave: Following a string of failed suicide attempts due to an alcohol addiction, the star relived her her booze hell while filming the BBC’s Young, Female And Addicted (pictured in 2022)

‘So I started as someone who drank to overcome social anxiety, to feel comfortable in my own skin. You know, you’re the life of the party kind of thing when you’ve had a drink, but eventually it stops being fun.

‘You know, I drank myself out of fun, into dependence and ruined it for myself, essentially.

‘I just made my life a living hell, and I made the life of everyone around me who was trying to, like, work for me or work with me a living hell and I living misery as well.

‘I remember my mum cry screaming at me once just being like, “How does it feel to be 19 and be an alcoholic?”

‘And she was at her breaking point. She was just waiting on the phone call to say that I’d passed away.

‘That now, as a sober person, is absolutely just a disgusting and sad and terrifying thought and I can’t imagine being a mother trying to navigate that world. So that was the reality. She was just waiting for that phone call.’ 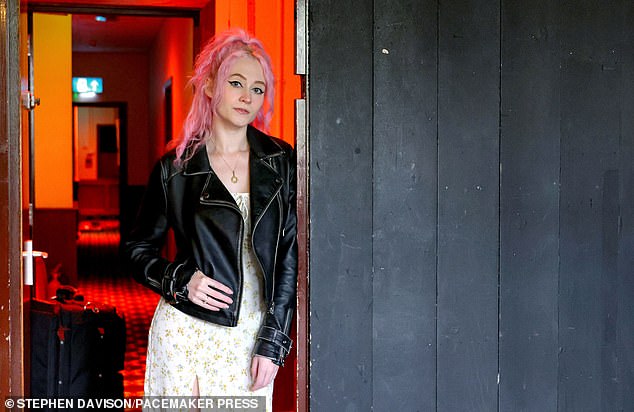 Open book: She explained in the episode: ‘I was just 16 when I appeared on The X Factor and suddenly became known to so many people’ (pictured in 2022)

In her BBC special, the pop star speaks to medical professionals and other young women who have had alcohol problems.

And she also returns to her family home to hear from her mum who spoke about just how difficult it was for her to see her daughter almost destroy her career – and herself.

Pat said: ‘She was a professional liar in relation to drink ,where drink was concerned – would not admit to having a problem at all.

‘And I was left in a very sticky situation because the manager would contact me but there was very little that I could do unless I was over there. Even then sure, she still hoodwinked me.

‘The way she was going on I think you’d have thought that she had missed a couple of years and was making up as a teenager drinking. 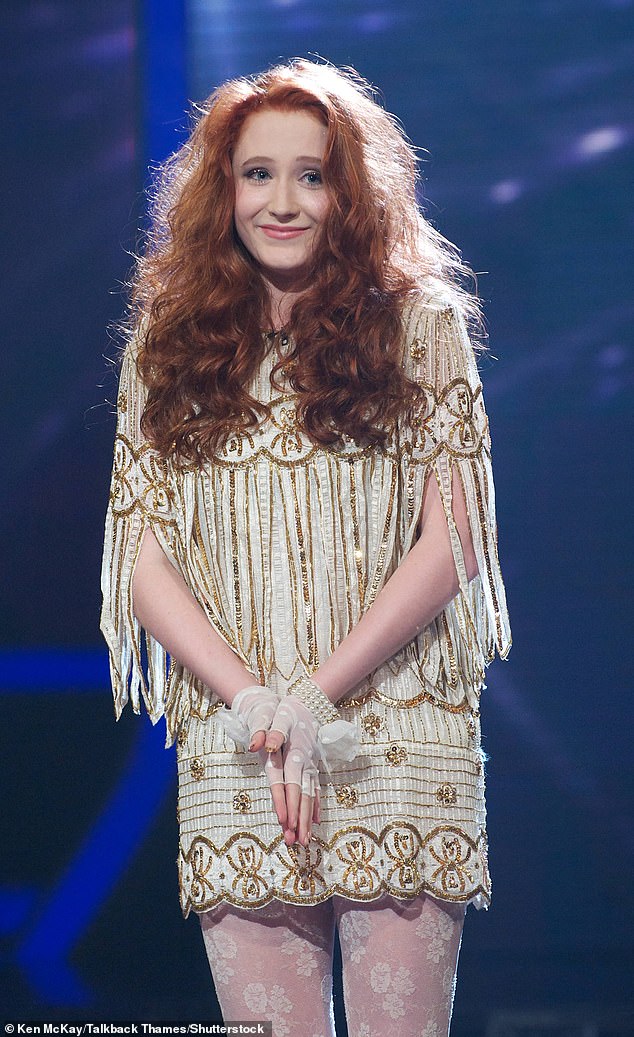 Throwback: ‘I was a child of 16 and it was terrifying. There’s no way to prepare yourself for getting online abuse from adults. It was hard’ (pictured in 2011)

‘And he’d be ringing me, I was in a full-time job. There was many a day I had to leave work, arrange a flight and head straight to England.

‘I was angry, I was cross – how did you to get to this point in your life? And I suppose you just think. ‘Oh, there’s a quick fix for it’ but there’s no quick fix for it.

‘Whenever she hadn’t been in touch for about three days, to me she was at the house not answering the door. She could have been lying in her vomit, you know that type of way? You know, she could have died.

‘The fear always was there of death, eventually you know, if she didn’t seek help or get help.

‘I suppose in a way I dealt with it the best I could, I think every mother wants the best for their child.

‘I do still carry trauma and worry for Janet, there’s just times that you wonder is she okay or will she revert back, you know, you just don’t know. 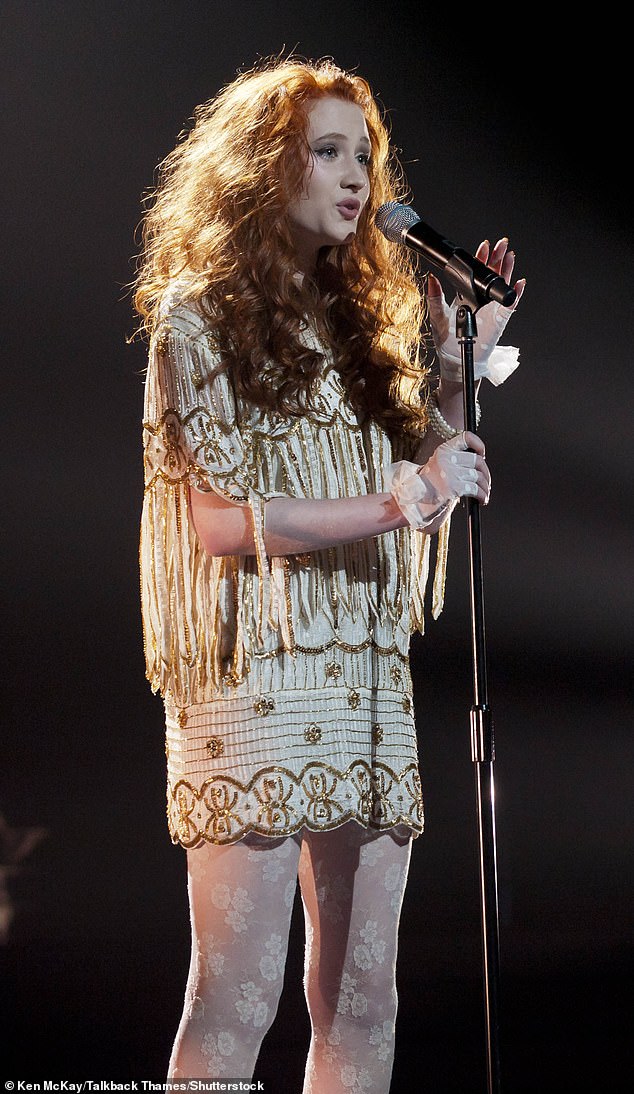 Tragic: ‘You know, if I was to open up in those days and admit at the time that I really was struggling to even be alive, the dialogue around mental health wasn’t there’ (pictured in 2011)

‘I’ve my confidence in her but there’s always a piece in the back of your head thinking, will something trigger it again? But fair play to her, she hasn’t done that.’

Janet has been essentially six years sober, having gone three years without a drink before a relapse and then another three years since.

She also spoke with her manager Rick Chambers who is reduced to tears at one point remembering the impact Janet’s addiction had on him and his wife when they took her in to their home to try and care for her.

At the time Janet was also battling anorexia and had scars on her arms from self-harming, admitting she was ‘so out of it that I forgot to cover them’.

Rick said: ‘Every bit of media we had to do, I had to you know warn them about your scars and constantly trying to make sure that in an edit everything was taken out for you and it was definitely dark at that that period.

‘I remember, you were living with me at the time because when things had gone so south, it was like you’ve got one option, which is to move in with me and my wife. 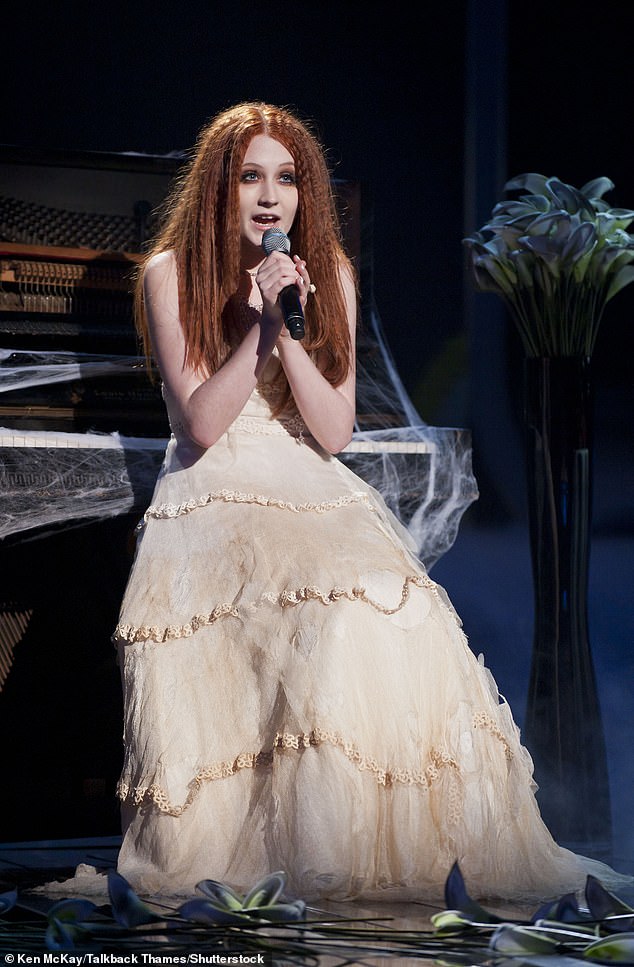 Awful: ‘So I just never said it. Kept it private, kept it buried deep down’ (pictured in 2011)

‘It didn’t get better. Even like coming home and like I you know, I used to have to send (wife) Cat into your bedroom to sort of see if you were alright because sometimes you’d like pass out naked on the bed.

‘We’d find bits of sick around the house. The bin down the street was where you’d put your bottles. Yeah, so we’d kind of know if you you’d been on a bender so we could make sure you were OK that night. It’s f***ing dark, man.’

Now because of her recovery, Janet said she can see just how much hurt and heartache she was causing colleagues and loved ones through her boozing.

‘But I kind of do because I just know that I didn’t want to live. It’s as simple as that.

‘It just felt like I wasn’t built for this earth in some way. The almost dying got so exhausting. 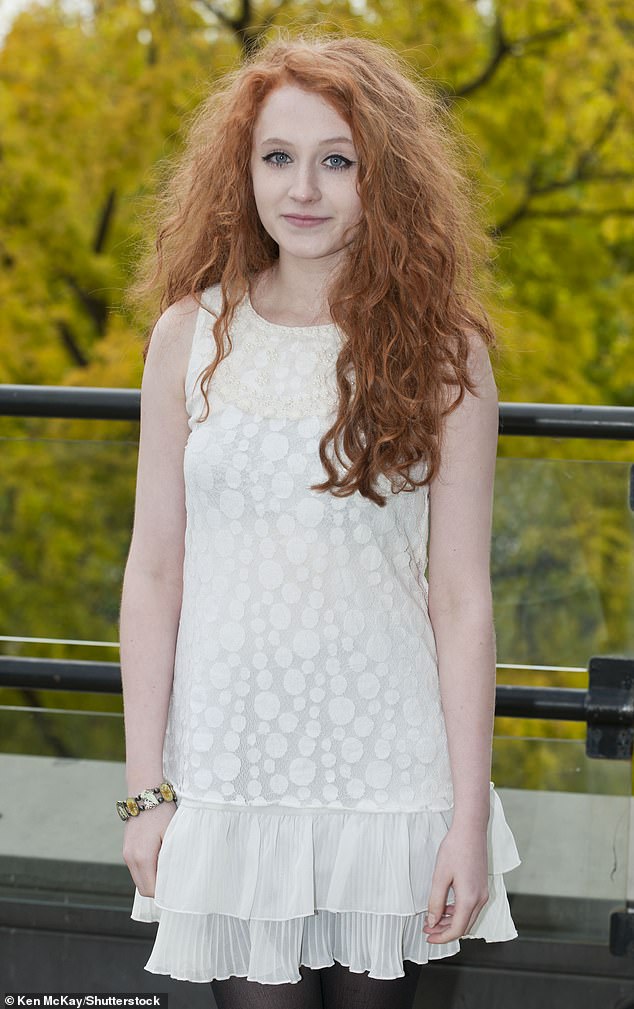 Suffering: ‘For me, The X Factor was in equal parts the best decision of my life and the hardest part of my life’ (pictured in 2011)

‘Like it was tiring to try and take my life on numerous occasions and wake up. That feeling of failure just exhausts to to your bones and to your core. Because you just feeling so hopeless. So worthless. That what’s the point? What is the point and getting better?

‘And it’s just the truth that alcoholism will take lives. And it doesn’t matter like how high up that pecking order you are. It will take your life away from you if you let it.

‘I think at the time when I was trying to take my own life. I wasn’t thinking about anyone else.

‘The only way I could ever describe it to people was like, my body felt like a burning building. And that existing was causing me so much pain that the only relief was to just jump out.

‘And that was the thing that pushed me over the edge to try and take my own life.

‘It makes me so thankful that I sought help and got into rehab and recovery before I totally ruined my own life or the lives of my family.

‘I’ve been in recovery now for almost six years, and it was the hardest but most liberating part of my life. I’ve said it before and I’ll say it again, I was incredibly lucky that I had a great support system. I don’t think I would have been able to do it without them.

‘And I never would have thought I would proudly call myself an alcoholic one day. But I am. Society portrays the alcoholic very differently than how I see the alcoholic.

Janet Devlin: Young, Female and Addicted airs on BBC One (NI) at 10.35pm on Monday. 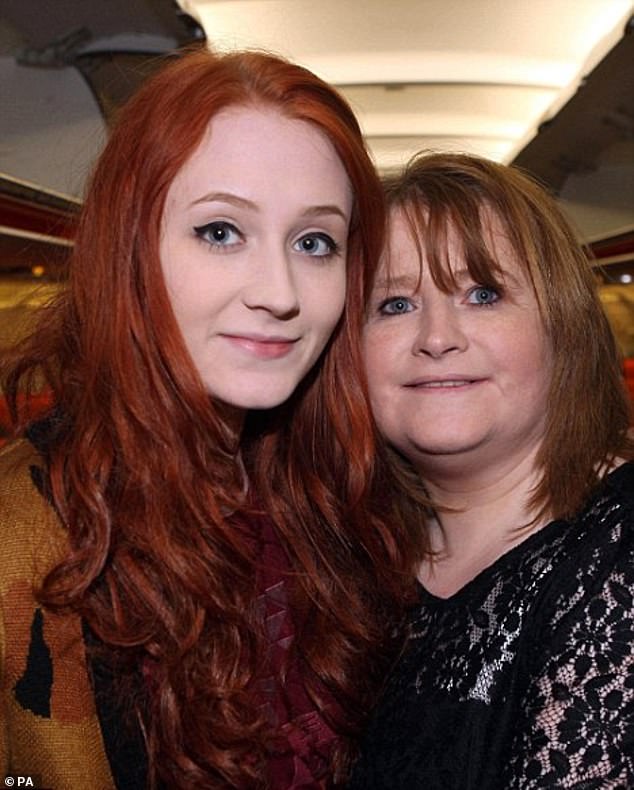 Dreadful: As well as talking about her own demons, Janet’s mum Pat (right) revealed she feared the phone call that would say her daughter was dead (pictured at an unknown time)