Iggy Azalea fans are going wild over her new tattoo.

The Australian-born hitmaker, 31, took to Instagram on Tuesday to flaunt her ample curves and chest in a tight-fitting bodysuit.

However, her followers were more interested in her latest arm inking – a cherub holding a banner reading: ‘Onyx Orion’ – a tribute to her two-year-old son. 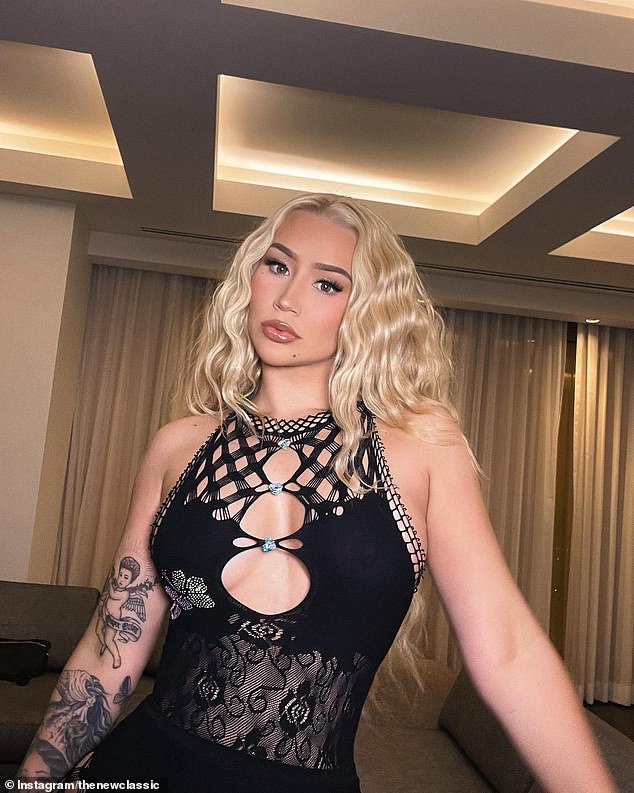 There it is!  Iggy Azalea fans went wild after spotting her new tattoo – a tribute her son Onyx, two – in two new photos she posted on Instagram on Tuesday

‘The Onyx tattoo made all the difference! And also matched with your others, it’s perfectttt,’ one fan wrote to the hitmaker. 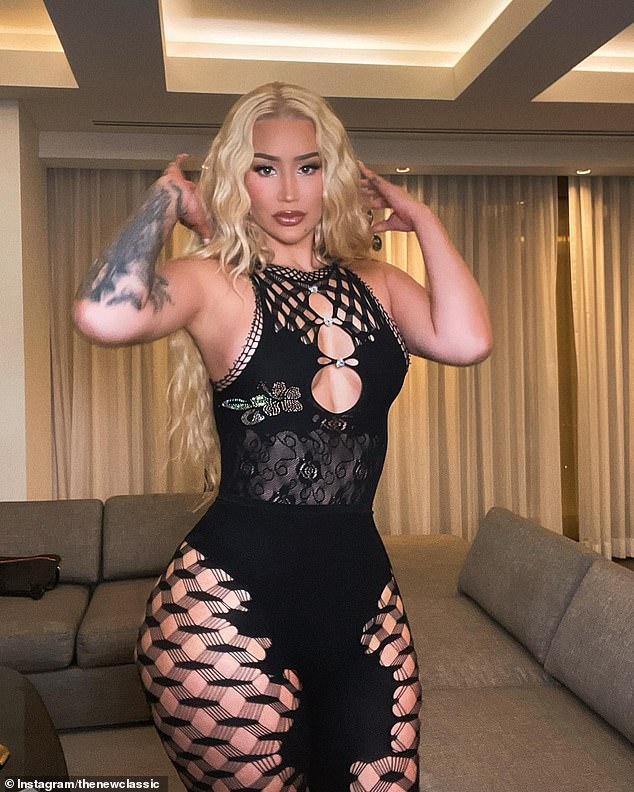 Dangerous curves! The Australian-born hitmaker, 31, flaunted her ample curves and chest in a tight-fitting bodysuit

Iggy looked sensational in her cleavage-baring bodysuit, which looked painted onto her bodacious curves.

Fawning: Fans were quick to point out the hitmaker’s new tattoo, which is a tribute to her son Onyx who she shares with Playboi Carti

‘My new favorite & most special tattoo!’ the Fancy hitmaker gushed in the caption.

She continued, ‘It makes me sooo happy that this was executed by a talented woman. @luahillsart Thankyou again!’

A rendering of the tattoo was displayed in the first clip, which then cut to scenes of Miami-based tattoo artist Lua Hills applying the ink to Iggy’s upper arm. 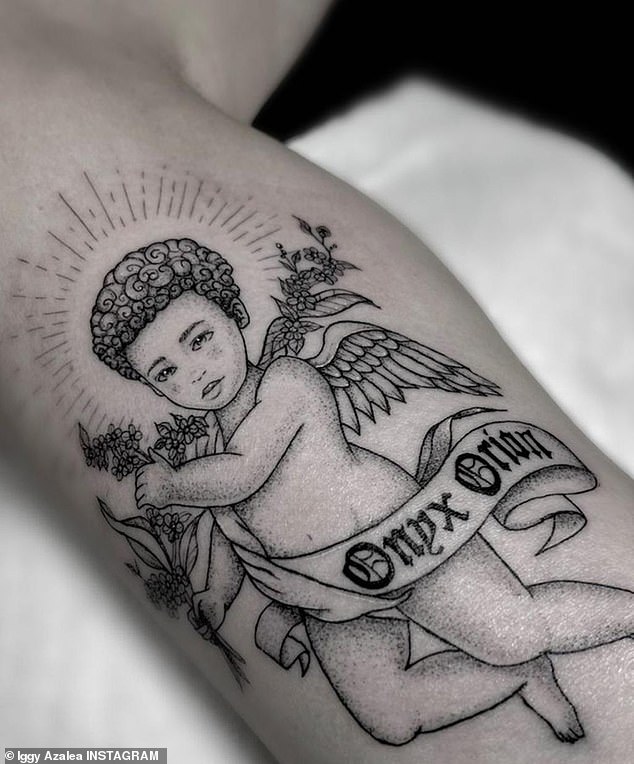 New tattoo: Iggy showed off the new ink back in April

The star was seen laying on a table while getting the new ink in the second video that she shared.

The massive custom-made inking portrayed Onyx as a winged baby angel, who was holding a sprig of flowers with a sunburst around his head.

Lua also shared one of the videos on her own Instagram account, writing, ‘Iggy Azalea hit me up for a tattoo and I’m still blushing over it. 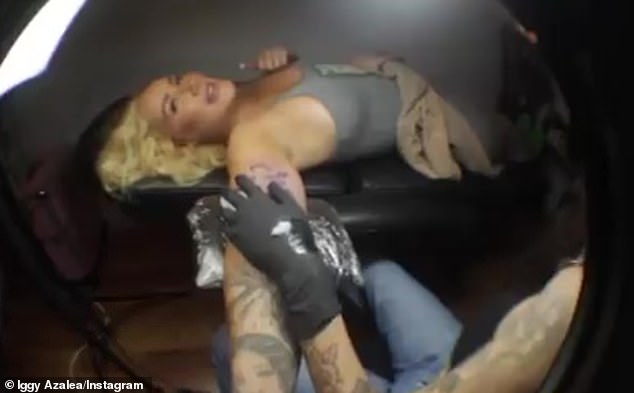 Getting inked: The Australian native was seen laying on a table while getting the new ink in the second video that she shared

‘Check out this cute little cherub we did in the style of her son.’

Iggy already has several tattoos including a portrait of Venus on her forearm, a flower on the back of her hand and the writing ‘Colour Me Free’ on her foot.

In 2015, she removed the tattoo that was dedicated to her ex A$AP Rocky, which was the words ‘Live Love A$AP’ across three of her fingers. 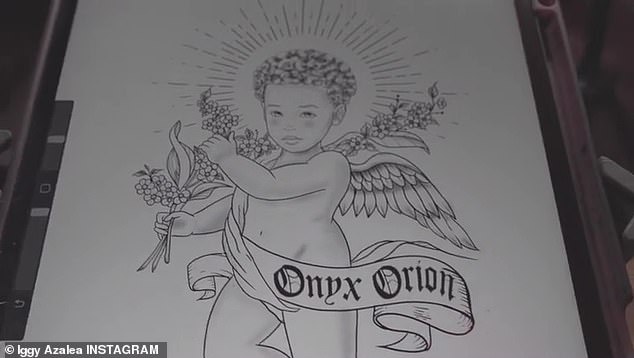 ‘My new favorite & most special tattoo!’ the Fancy hitmaker gushed in the caption

The four-time Grammy nominee and the Praise the Lord rapper dated from 2011 to 2012. 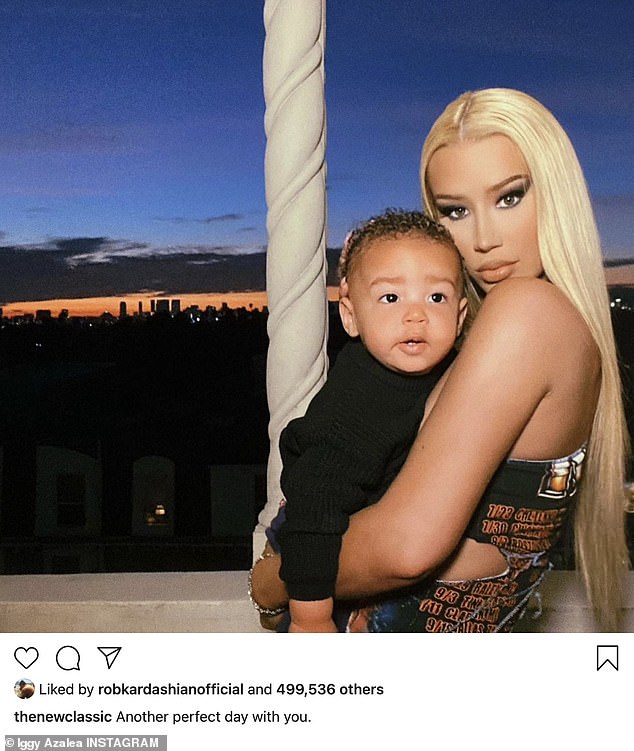 The recording artist recently said she is ‘not on even remotely on good terms’ with her ex.

She clapped back at claims that the rapper took ‘care’ of  her and Onyx that he made during a recent interview with XXL magazine.

The blonde beauty also said that they have no ‘direct contact’ because he treats her like ‘sh**’ in an array of now-deleted tweets. 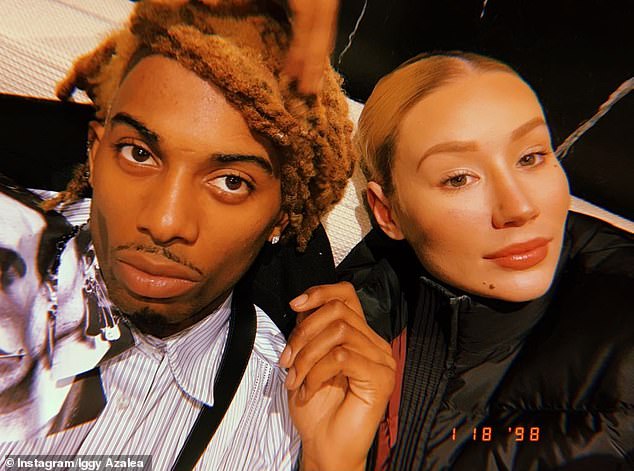 Nope! Iggy said she is ‘not on even remotely on good terms’ with ex, Playboi Carti