Her Majesty is still scheduled to travel from Windsor Castle to London on May 10 and read the Queen’s Speech in the Houses of Parliament. However, alternative plans that would see Prince Charles step in for the 96-year-old sovereign have been devised amid fears she won’t be able to attend, it has been claimed.

A Whitehall source was reported by The Times saying it “was looking increasingly unlikely” the monarch would read the speech announcing the Government’s agenda.

They also claimed discussions regarding the Prince of Wales taking over were advanced.

A royal source said the monarch, who is said to be experiencing mobility issues, is still planning to carry out this key duty as a constitutional monarch.

However, her presence would not be confirmed until Tuesday morning, just hours ahead of the beginning of the ceremony in Whitehall. 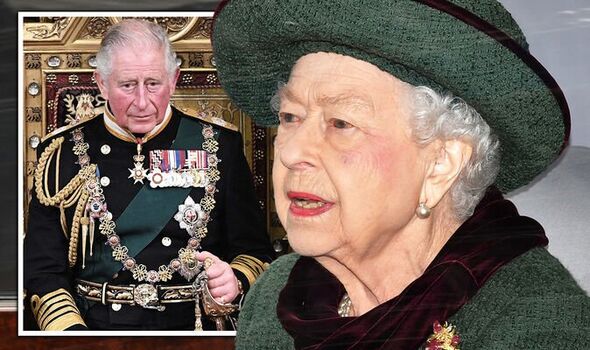 The Queen may not attend the upcoming State Opening of Parliament (Image: GETTY)

The Queen and Prince Charles walking together inside the Houses of Parliament in May 2021 (Image: GETTY)

The Telegraph reported that, to make the Queen’s attendance possible and comfortable, aides are to insert “tweaks” to the traditional ceremony.

These changes would include Her Majesty travelling by car to the Houses of Parliament rather than by carriage, reaching the floor with a lift rather than walking up the stairs and wearing a day dress and a hat without a heavy crown.

This would not be the first time the monarch travels to Parliament by car and does not wear a tiara to deliver the Queen’s Speech.

In recent years, including 2017, 2019 and 2021, the State Opening ceremonies featured reduced ceremonial elements due to either their timing or regulations in place because of the coronavirus pandemic.

READ MORE: Meghan ‘loathed’ England but may ‘come back for biggest role’ – claim

The Queen, Prince Philip and Prince Charles at the 1970 State Opening of Parliament (Image: GETTY)

Tweaks to the traditional ceremony in Parliament have been made during the years to accommodate the Queen’s advancing age, including the decision to have the weighty Imperial Crown being carried inside the chamber rather than worn by the sovereign.

Reports the Prince of Wales may step in for his mother for the first time ever at the upcoming State Opening of Parliament first emerged in late March.

A source told the Sunday Times: “The date is in Her Majesty’s diary, and she hopes to attend.

“The Queen remains fit and active, and it is amazing how much she still does.

“But her diary is being paced to reflect the realities of a woman of her age, and to ensure that she is able to continue to do as much as she can and would like to do.

“All events will now be scheduled so that if Her Majesty is unable to attend at short notice, another member of the Royal Family will still be present.”

Throughout her record-breaking reign, the Queen has missed the State Opening of Parliament twice.

First, in 1959, while she was pregnant with Prince Andrew and again four years later while expecting Prince Edward.

On these occasions, the speech was read by the Lord Chancellors in place at the time.

If the Prince of Wales were to step in instead of the current Lord Chancellor, Dominic Raab, next Tuesday would mark the biggest step to date in the gradual handing over of the sovereign’s duties from mother to son.

Prince Charles has been replacing Her Majesty on several occasions in the past few months.

In November, when the monarch pulled out of the evening reception at the COP26 summit in Glasgow, he led the royal charm offensive focused on the environment and fighting climate change.

Prince Charles may be stepping in again for his mother at one of the four announced Garden Parties taking place at Buckingham Palace and the Palace of Holyroodhouse following the Queen’s office saying she would “be represented by other members of the Royal Family”.

The Queen first sparked health concerns on October 20, when she cancelled her trip to Northern Ireland to mark the centenary of the nation after being advised by her doctors to rest for a few days.

It was later revealed she was brought to hospital on that same day to run “preliminary tests”.

The monarch has since carried out engagements outside of her residences only once, when she attended the service of thanksgiving for Prince Philip at Westminster Abbey in March.

Nevertheless, she continues to hold in-person and virtual audiences and carries out her daily duties as sovereign.