Inside Billie Lourd's lavish wedding to Austen Rydell in Cabo!

New images capturing the magic of Billie Lourd’s wedding to Austen Rydell have been released.

The bride, 29, looked magnificent in a lavish Rodarte gown as she kissed her new husband, 29, beside lavish light installations following their ceremony in Cabo San Lucas, Mexico on Saturday.

Billie described her intimate wedding ceremony and the many different designer outfits she wore throughout the festivities in an interview with Vogue. 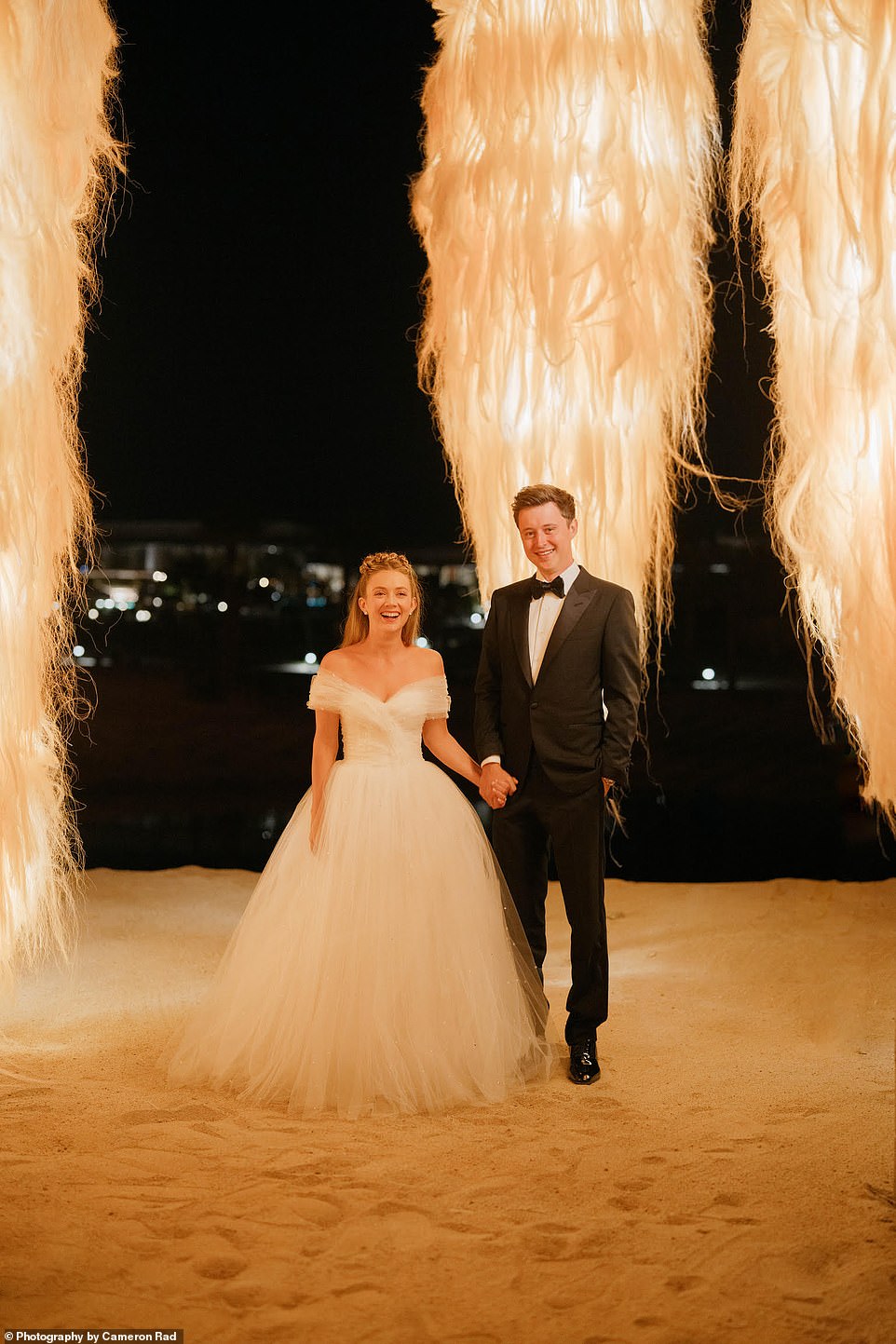 Introducing the new Mr. and Mrs! Billie Lourd has given fans a first-hand account into her wedding with Austen Rydell as she shared photos of their magical nuptials

For the rehearsal dinner, which was themed ‘Floral Friday’, Billie wore an embroidered Oscar de la Renta gown with white flowers tucked into her braided hair.

On her wedding day, she selected a custom Rodarte gown which she altered to include an under layer of sequins.

And for her after-party, she wore another Rodarte dress inspired by the dance outfits her ‘glam-ma’ Debbie Reynolds wore during her shows.

Billie said she ‘immediately fell in love’ with Rodarte designers, sisters Kate and Laura Mulleavy, after they interviewed her mother, the late Carrie Fisher, for an article in 2014.

Billie ultimately selected the first dress that was presented to her to try on when she visited their downtown Los Angeles studio. ‘Every gal’s dream!’ she gushed. 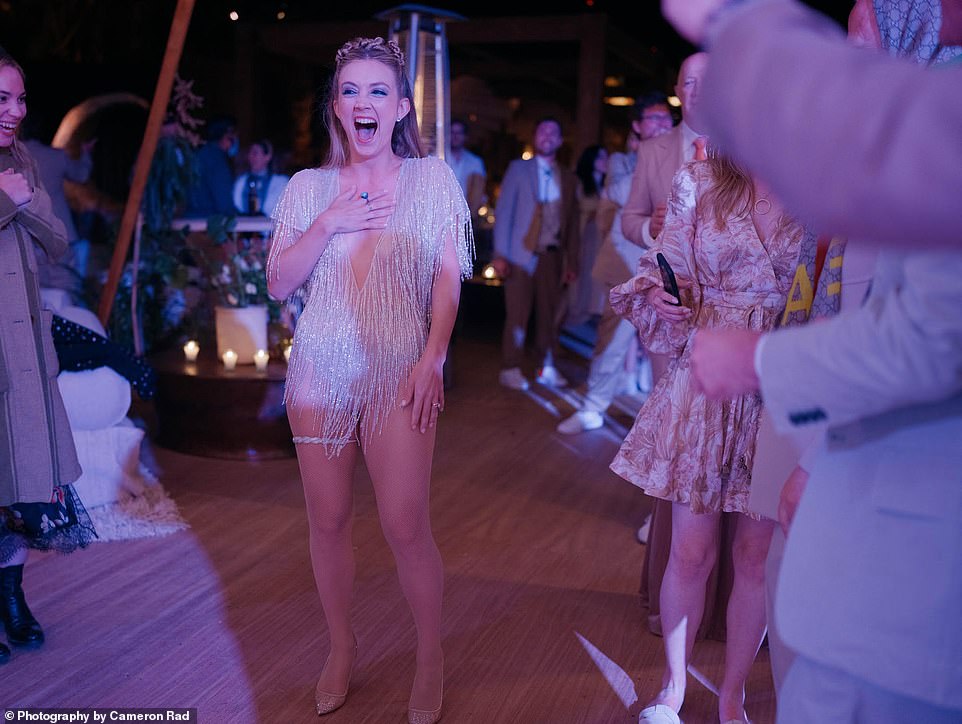 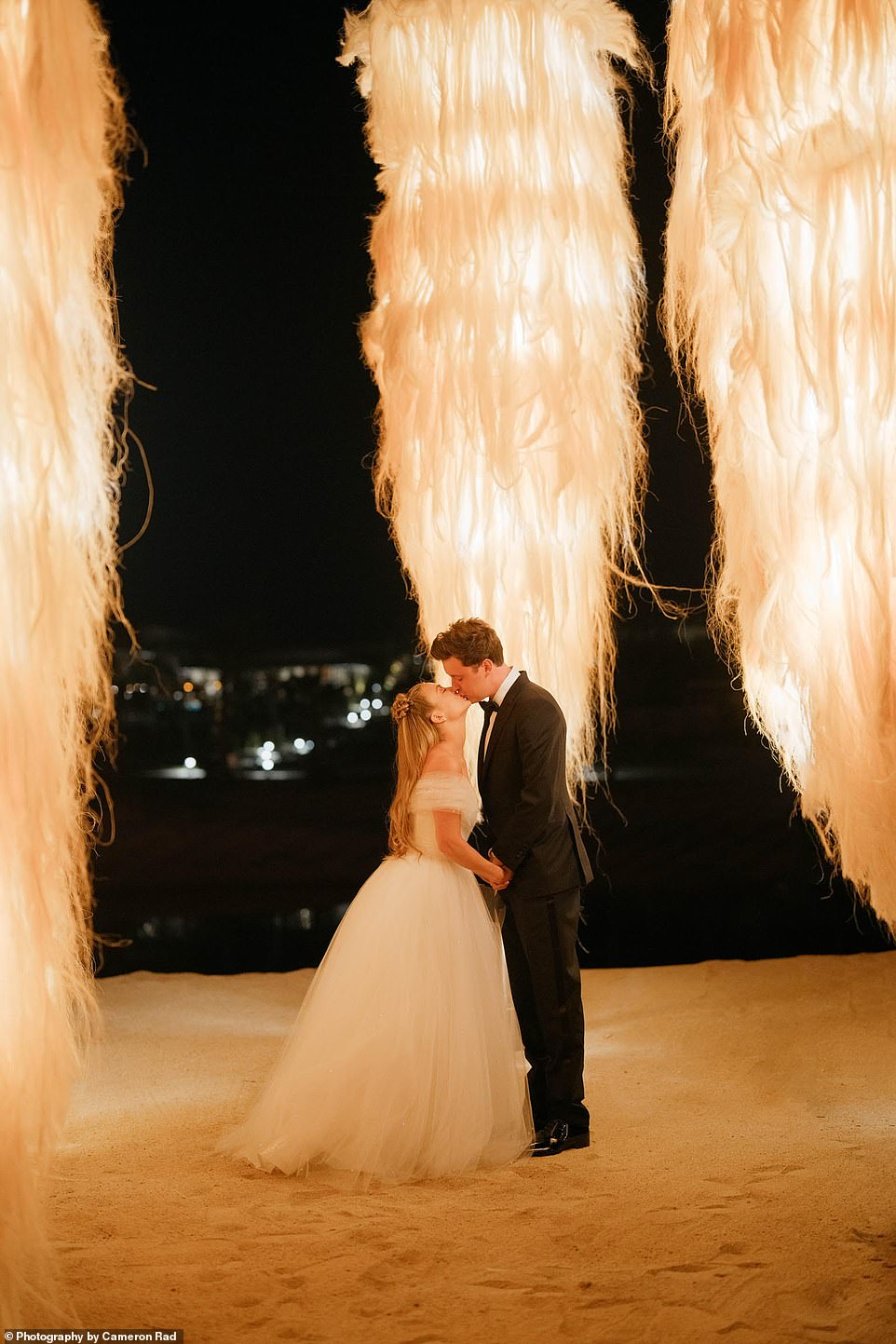 Kiss me! The newlyweds shared a smooch as they posed beside an elaborate light installation 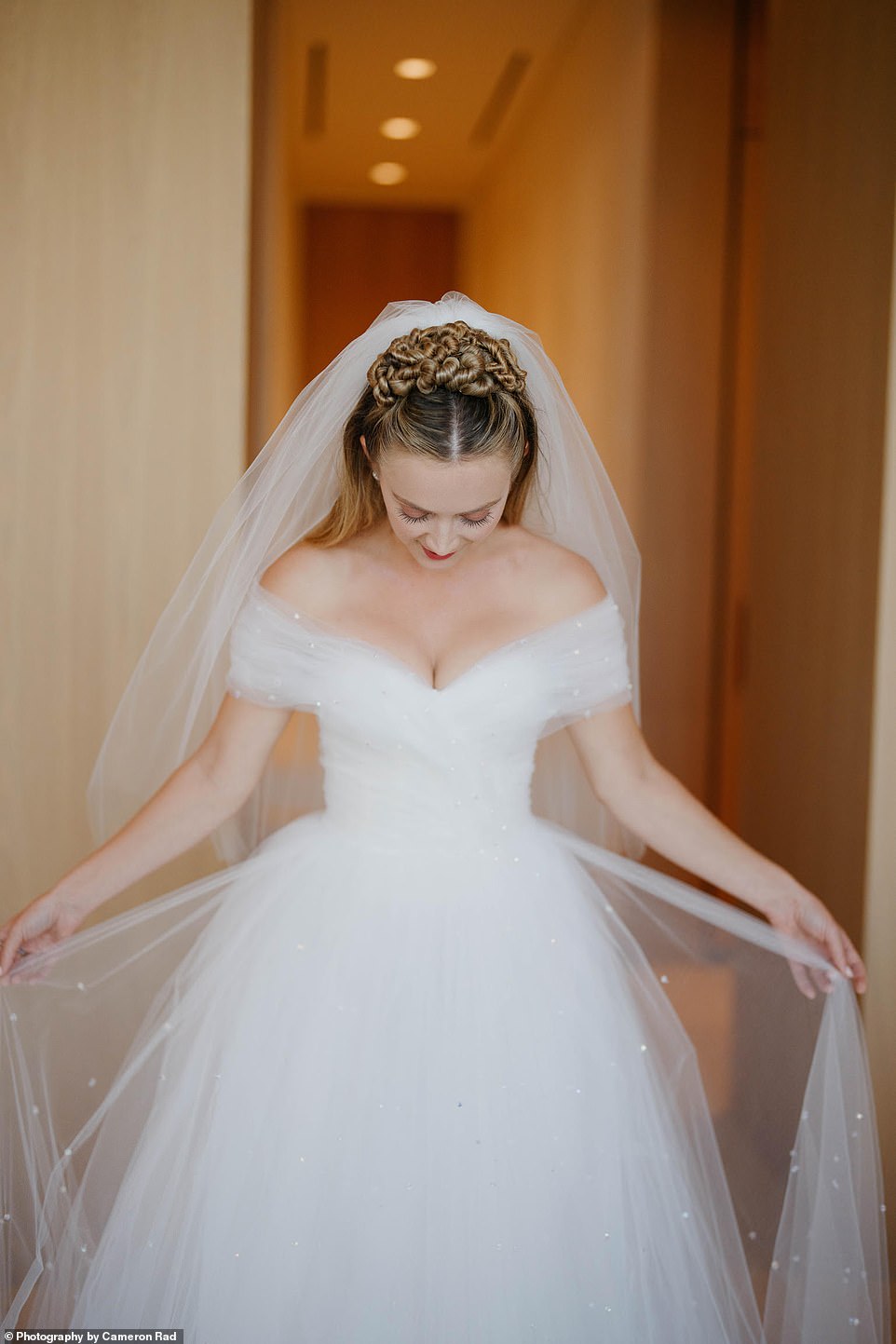 Blushing bride: Lourd wore a beautiful Rodarte gown on her wedding day, saying she fell ‘in love’ with the designer after they interviewed her mother Carrie Fisher in 2014

‘We got married on the beach at sunset so I really wanted something that reflected the vibe of the ocean-y setting,’ she added of the dress selection.

On her wedding day, Billie accessorized her dress with an array of jewelry, including her engagement ring.

As for her something borrowed, the bride wore a ring her mother had given to one of her closest pals.

Here comes the bride: The 29-year-old posed up a storm in her glamorous dress which cinched into her waist and fell off her shoulders 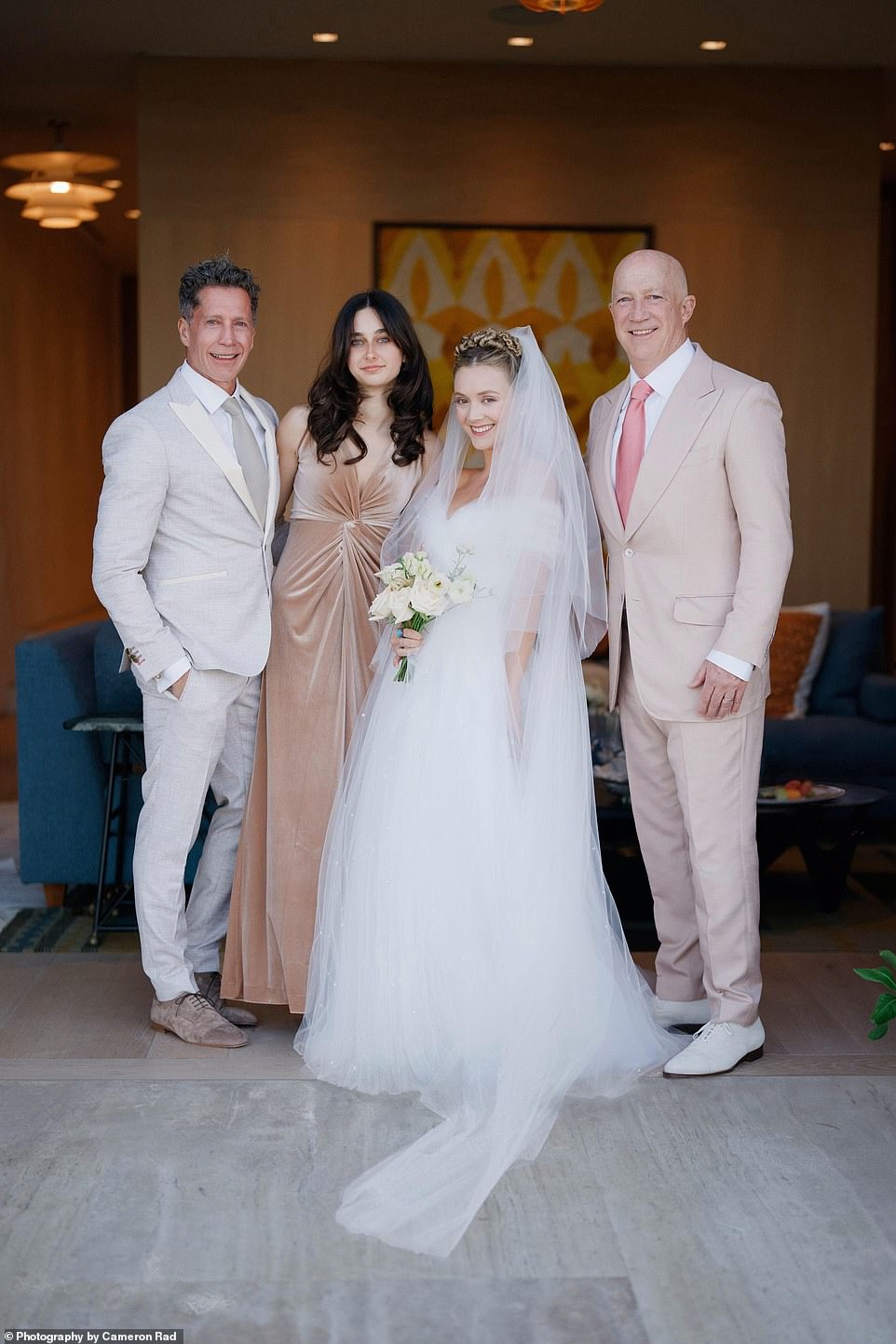 Her something old was a pair of vintage Neil Lane diamond studs given to her by her father, and her something blue was her mother’s favorite ring, a blue fire opal she wore constantly.

Billie also wore a pair of shoes made by Rene Mancini. As fate would have it, the shoes ended up being connected to her mother.

‘My dad was walking around town shopping and came upon the store and found the perfect shoe,’ Billie said. ‘They reminded him of the shoes my mom used to wear in the ’90s. But he had the same experience I had with my rehearsal dinner dress. It was a month before the wedding, and they told him they take four months to make the shoes.

‘He talked to Mohamad, the manager of the store, and told him when the wedding was and asked him if he could somehow rush them, and he magically made it happen! When he came to pick up the shoes, it turned out my dad’s hunch about my mom was right. Mohamad told him that my mom used to shop at their store in New York City in the ’90s. The perfect shoe turned out to literally be the perfect shoe. It was serendipity!’

Vogue described the ceremony as ‘intimate’ with only family and incredibly close friends attending. The wedding was officiated by her mother’s best friends, Gavin DeBecker and Bruce Wagner.

‘We wrote our own vows and sobbed the entire time,’ Billie said. ‘Word to the wise–always wear waterproof everything!’

‘It was the most hysterically brilliant and touching officiating in the history of officiating,’ Billie said of the officiants. ‘And in true Carrie fashion, we threw glitter in the air at the end of the ceremony. It was magical. I could not have dreamed up a more perfect wedding.’

Billie and Austen became engaged in June 2020 after four years together.

The couple had one break-up during their relationship, but reunited soon after.

Three months after the engagement, Billie and Austen welcomed a son, Kingston Fisher. 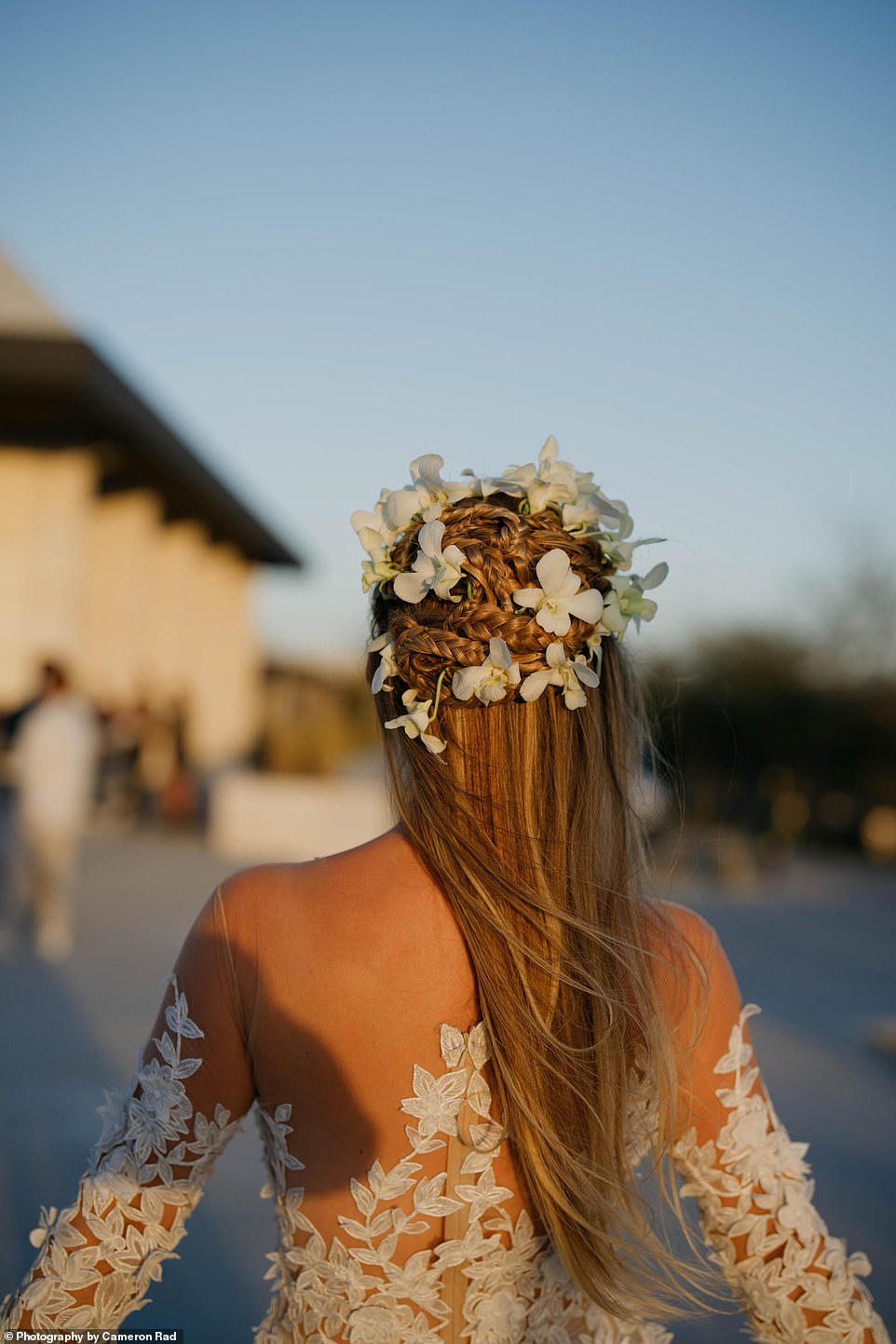 Saying yes to the dresses! Lourd wore three different dresses over the wedding weekend, including this Oscar de la Renta number for her rehearsal dinner 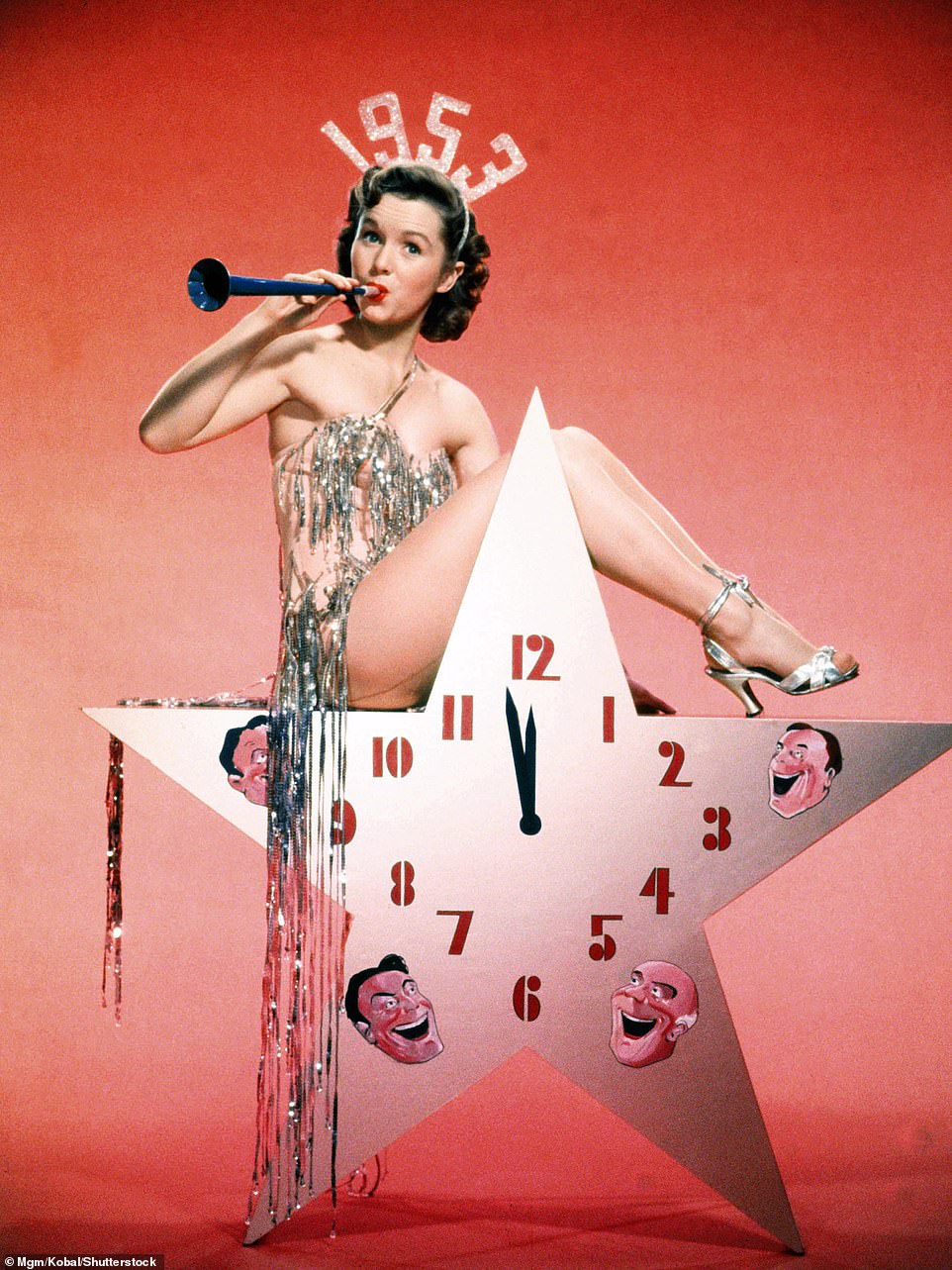 Philadelphia to require masks in schools once again