Since joining the Royal Family, the Duchess has conducted herself impeccably, steering away from scandals and major mishaps, according to German nobility expert Stefan Blatt. Speaking to Laura Schäfer, head of royal department at Bunte magazine, Mr Blatt said: “She is always good for a great photo, she is committed to the right issues.

“She never makes a mistake. She’s never had a scandal.”

However, this seemingly perfect behaviour comes with a downside, he continued.

The commentator said: “We don’t know how she reacts in times of crisis.

“She kept out of things when it came to Meghan, as well as Andrew.” 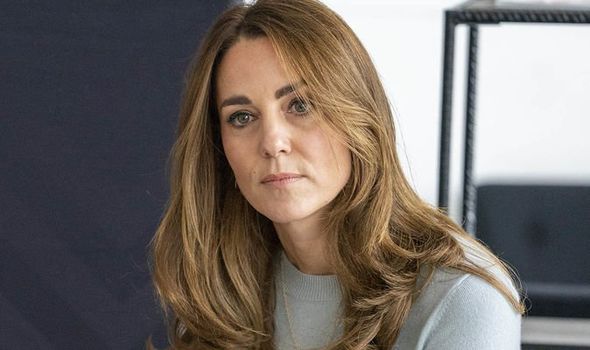 Kate is to become Queen Consort when Prince William accedes to the throne (Image: GETTY)

Kate and Prince William dropping off their eldest children to school (Image: GETTY)

The commentator hopes Kate will get more front and centre and speak out on thorny issues when she eventually becomes Queen Consort.

He said: “As Queen she has to take sides a bit more for the good she stands for.”

Kate, who joined the Royal Family in April 2011 by marriage, is to become the next Princess of Wales after the end of the Queen’s reign.

Once her husband Prince William becomes King, she will assume the title of Queen Consort and support him and the Crown throughout his reign.

Kate has been described as an introvert by a source (Image: GETTY)

Monarchs in Britain are expected to remain strictly politically neutral – a position perfectly embodied by Queen Elizabeth II over the past 70 years, who has strived not to take sides and conceal her views throughout her reign.

Most famously, she opened up on personal difficulties in 1992, a year she branded “horribilis” in a speech following the fire at Windsor Castle and a series of family’s issues including the publication of Sarah Ferguson’s intimate pictures, Princess Diana and Prince Charles’s separation and the divorce of Princess Anne and Mark Phillips.

Kate is expected to become the next Princess of Wales (Image: GETTY)

Since joining the Firm, Kate has increasingly grown more confidently into her public role.

Following years of work behind the scenes to hand-pick patronages to support and increase her knowledge in areas that interests her, including the impact of the early years in adult development and mental health, she launched a series of solo and long-term projects, including the ambitious Royal Foundation Centre for Early Childhood.

A source described as a confidante of the Duchess claimed Kate is a private person who would have never pursued a career in public office had she not married the future sovereign.

They told the Daily Mail: “There is no way Catherine would be doing anything in public life if she hadn’t fallen in love with William. She is very open about that.

“Public life is full of extroverts, people who seek the limelight and enjoy it. And she isn’t one of them.”

Speaking further about the Duchess as an introvert, the friend said: “She doesn’t want to go to parties and would prefer to live the quiet life at home with her family.

“But she did fall in love with a prince and they have developed into a really good team.”

Kate is the patron of more than 20 organisations (Image: GETTY)

“William and their children are the centre of her world and nothing works without her family.

“They have worked hard together as a couple to create a balance [between their public and private lives] and whatever comes next, they are doing it from a place of stability.”

Another source said the Duke and Duchess of Cambridge share a “pretty simple” family life behind closed doors.

They added: “Catherine and William are most in their element when they are out in their wellies in the sticks, muddy and scruffy with the kids.”