Irina Shayk was spotted enjoying a relaxing stroll with her five-year-old daughter, Lea, in New York City earlier on Thursday.

The supermodel, 36, held her daughter’s hand as they walked through the bustling city together. The Sports Illustrated Swimsuit alum shares her daughter with Hollywood actor, Bradley Cooper, 47.

The pair ended their relationship in 2019, but continue to co-parent Lea. A source close to the two stars recently opened up to Page Six that they are ‘considering getting back together.’ 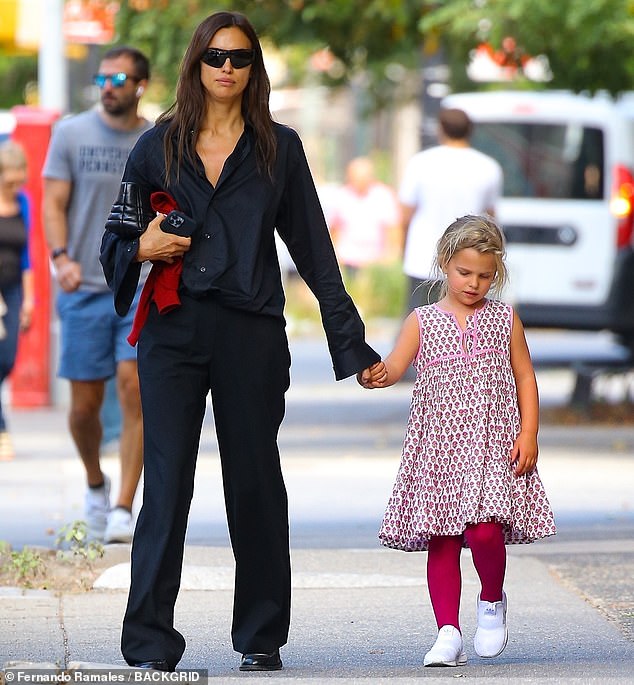 Afternoon outing: Irina Shayk, 36, was spotted holding hands with her daughter, Lea, 5, as they enjoyed a peaceful stroll together in New York City earlier on Thursday

The beauty kept her look stylishly casual for a short stroll around the big apple, opting for a pair of black, loose-fitting pants.

The supermodel added a long-sleeved, black blouse on top which she left partially unbuttoned and tucked into the waist of her pants.

Irina slipped into a pair of chic, black loafers to stay comfortable for walking through the busy streets of Manhattan. 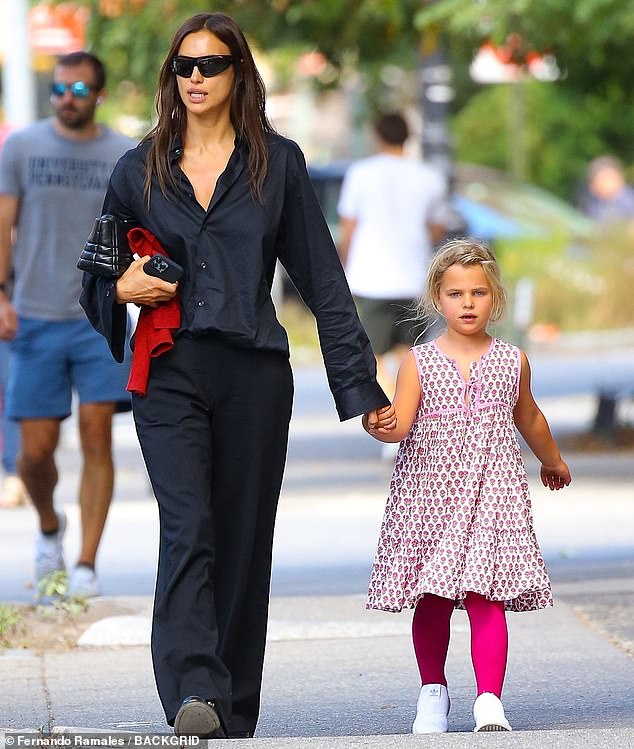 Mother daughter duo: The model and her daughter walked hand in hand for their outing together on Thursday

The Vogue model accessorized her look with a pair of stylish, black sunglasses to protect her eyes from the afternoon sun.

Irina held a black bag in the crook of her elbow instead of carrying a heavy purse or backpack.

She chose to not add any large or flashy jewelry to keep her ensemble minimalistic. Her daughter contrasted her outfit, and wore vibrant pink tights along with a pink patterned dress.

The former Victoria’s Secret model was seen holding Lea’s sweater in her arm during their walk.

Irina was spotted embracing her ex, Bradley Cooper, earlier this week on Wednesday during an outing together with their daughter. The two reportedly have been considering rekindling their relationship which ended three years earlier. 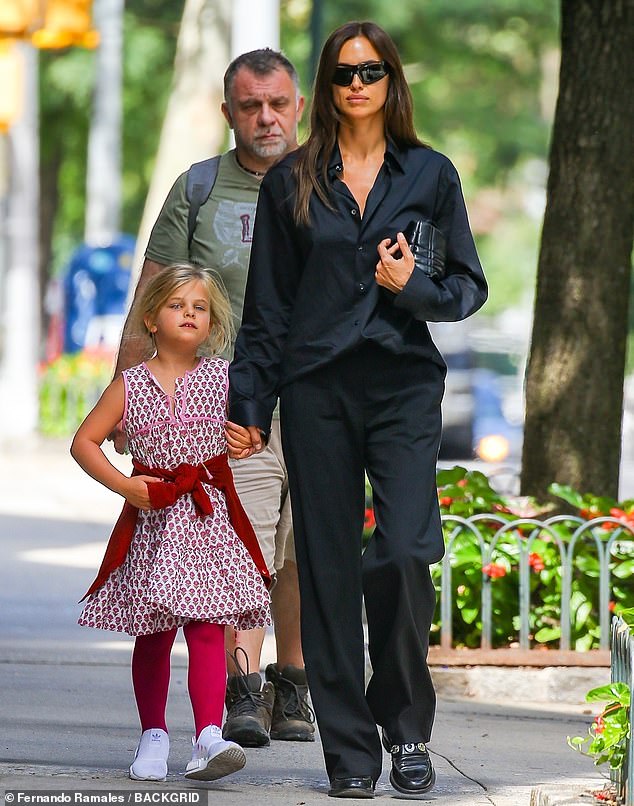 Possible reconciliation: A source recently informed Page Six that the model and actor are ‘considering getting back together’ following their split in 2019

Both Irina and Bradley have been focused on co-parenting their daughter since their separation.

An insider close to the two stars weighed in on their recent summer getaway to Page Six, stating that, ‘It was a real family getaway and they are considering getting back together.’

The source also informed the publication that Irina would ‘like her daughter to have a sibling, adding that the model and A Star Is Born actor, ‘haven’t gotten serious with anyone else and they are both into the idea of having a kid.’

‘It’s not Bennifer 2.0, where the other person is always in the back of their head, it’s more like, ‘why not?’ They have to deal with each other anyway since they are parents together. They are both thinking, maybe it’s time to finally really settle in,’ the insider concluded to the publication.

Irina and Bradley were first linked back in 2015, and welcomed their daughter two years later in 2017. The stars decided to call it quits in 2019.

At the time of their sudden split, a source opened up to Us Weekly that the pair were, ‘not in a great place.’ 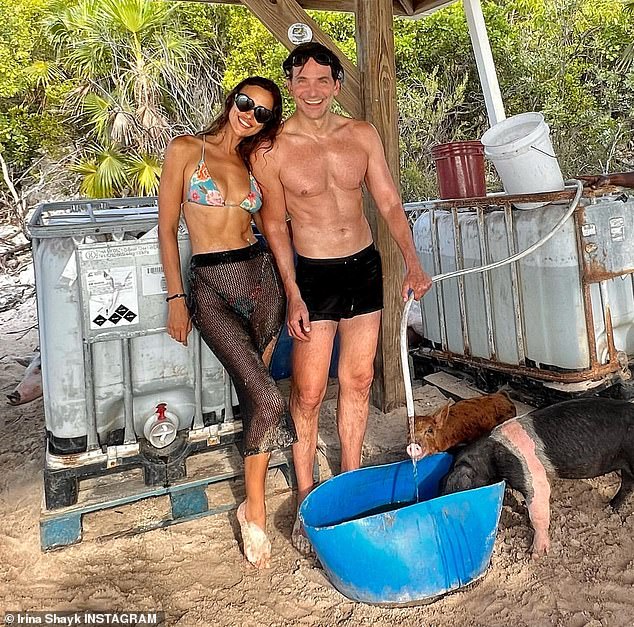 Recent getaway: Both Irina and Bradley enjoying a late summer getaway together which the model shared onto her Instagram on August 28, with a source explaining to Page Six, ‘It was a real family getaway…’ 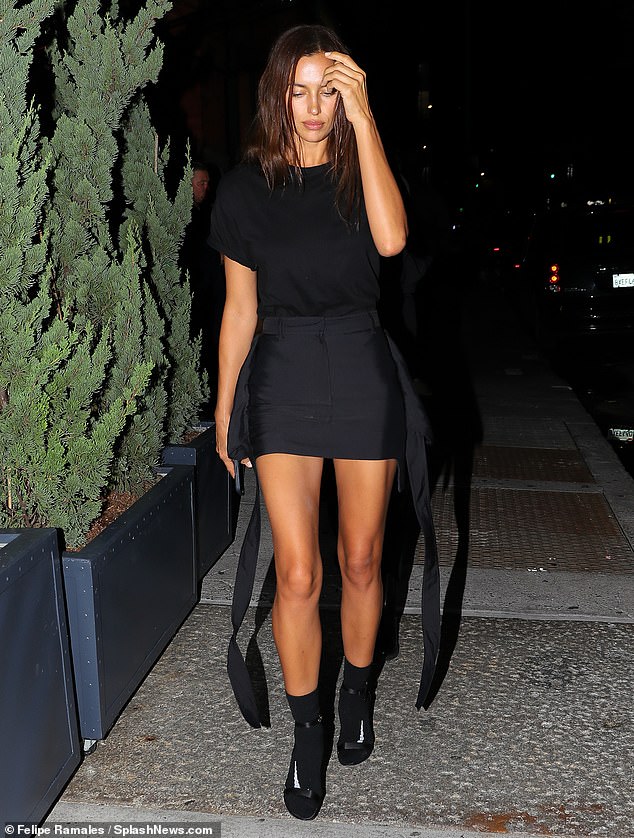 Other celebrity friends were also invited to celebrate the birthday girl, including Martha Stewart, Kate Hudson, and Ashley Graham.

The hard-working mom of one donned a black mini skirt to showcase her toned legs that also contained thin strips of fabric that fell down towards the ground.

The Harper’s Bazaar model added a black, short-sleeved shirt which she tucked into the waist of her skirt.

To finish off her party ensemble, Irina slipped into a pair of black, open-toed heels which she wore with Nike socks.

The beauty has been on-the-go, and recently made an appearance at the Venice Film Festival to walk the glamorous red carpet for the premiere of L’immensita.

Dressed to impress: Irina donned a black mini skirt with thin strips of fabric that fell down towards the ground for a stylish edge 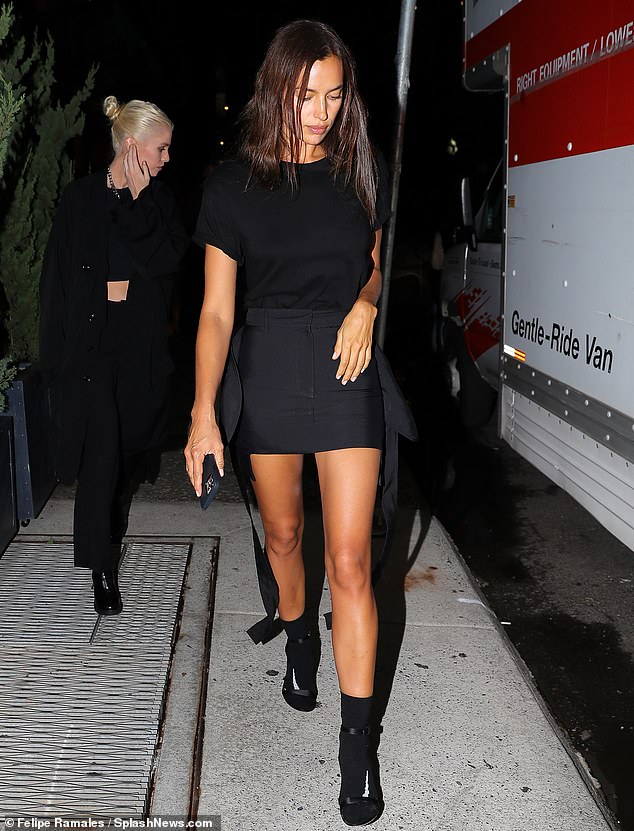 Star-studded: Other celebrity guests were invited to the festivities, including Ashley Graham and Kate Hudson 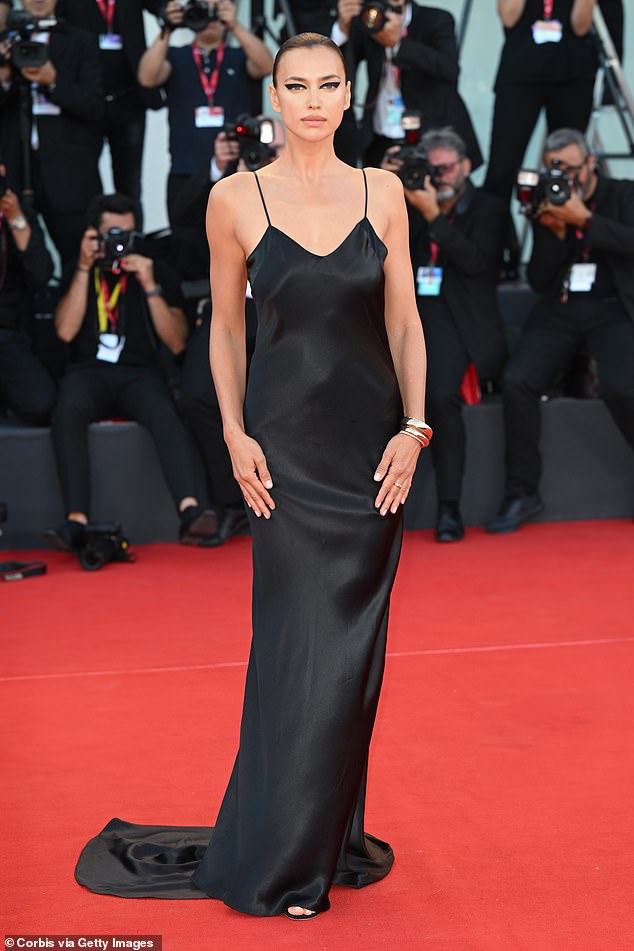 Stunning: Irina recently walked the red carpet during the 2022 Venice Film Festival for the premiere of L’immensita which premiered earlier on Sunday