Is it time to fortify your portfolio with a shield of GOLD?

During times of crisis, investors often look to gold as a safe haven for some of their long-term investments. Yet, despite its physical allure and reputation for being a financial port in a storm, this precious metal is not guaranteed to make you money.

When Russia rolled its tanks into Ukraine ten days ago, the price of gold immediately soared from $1,893 an ounce to $1,974 – an increase of more than 4 per cent.

Although it then slipped back, the price rose sharply on Friday as global stock markets fell in response to Russia’s seizing of Ukraine’s nuclear power plant in Zaporizhzhia. The FTSE100 index fell by nearly 3.5 per cent, while gold climbed back to above $1,963.

Adrian Ash is director of research at gold broker BullionVault. He says: ‘Investors should treat gold as an insurance policy against terrible events and stock market falls. But the ideal time to invest is before a crisis happens – not during one.

‘Yet it should not stop you drip feeding money into gold over time no matter what is going on in the world. It’s a good portfolio diversifier.’

Ash points out that the price spike has actually led to an increase in owners looking to sell as gold has neared the peak it reached 19 months ago.

David Coombs is head of multi-asset investments at wealth manager Rathbones. He is co-manager of the Rathbone Total Return Portfolio with Will McIntosh-Whyte. This £377million fund is big on investment diversification – and has five per cent exposure to commodities.

Last month, it increased its gold holdings from 2 to 4 per cent through exchange traded fund iShares Physical Gold, a fund that tracks the performance of the gold price. Coombs believes there is merit in holding gold as a ‘just in case’ asset to hedge against future economic woes.

He fears a tough year ahead for global economies with stagflation – stagnant economies and rising prices – a real possibility. Coombs says: ‘Anyone trying to make money from gold trading at the moment is either brave or foolhardy – there is so much uncertainty as a result of the tragic events unfolding in Ukraine.

‘For example, Russia might well sell some of its gold reserves to keep its economy afloat. This might cause the gold price to tumble. Alternatively, it could buy more gold to help shore up the crumbling value of the Russian rouble. Nobody knows.’ This ‘just in case’ view is shared by Jason Hollands, managing director of wealth manager Bestinvest. He believes gold should make up a small percentage – perhaps 5 per cent – of everybody’s investment portfolios. He views it as a hedge against future turmoil in global stock markets. He says: ‘The perception of gold as a safe haven comes from the fact that it is something tangible that you can hold in your hand. Something valued in troubled times.’

Like Coombs, Hollands believes the best way for investors to put money into gold is through an exchange traded fund – listed on the London Stock Exchange – which tracks the gold price. It means an investor does not have to pay for its physical storage. Gold funds that investors should look at include Invesco Physical Gold, Wisdom Tree Physical Gold and iShares Physical Gold. Respective annual charges are 0.12 per cent, 0.39 per cent and 0.14 per cent.

Ruffer Investment Company is a £768million investment trust run by Hamish Baillie and Duncan MacInnes. Its focus is on capital preservation and it invests in a mixed bag of assets.

In December last year, it raised its gold stake from just over 5 per cent to 8 per cent – and still feels it represents an attractive investment.

MacInnes says: ‘Some investors seem to have fallen out of love with gold, with many turning their attention to the new shiny attraction of cryptocurrencies such as Bitcoin. But we still think it has great appeal.’

Troy Asset Management runs the £1.8billion Personal Assets Trust, which holds 9 per cent of its portfolio in gold bullion. Fund manager Sebastian Lyon says that a key reason for this is ‘capital preservation’. He fears potential high inflation this year could affect the value of stocks and shares by eating into company profits. Gold is seen by Lyon as a good hedge against rising inflation.

Coombs believes gold is not the only precious metal investors should be looking to get exposure to. He says others worth considering include silver, palladium, platinum and silver.

‘Think about what you would like to be holding in a safe deposit box if the financial system crashes,’ he says. ‘Gold may still be top of the list, but you may also want other metals in your portfolio.’

In the past 12 months the value of gold has risen by 12 per cent in sterling terms. Over the same period, silver has fallen in price by 3 per cent to $25 an ounce while platinum has dropped 10 per cent to $1,050 an ounce.

These metals could be due for a price bounce. Only palladium has gone up in price – like gold, rising 12 per cent over the last year to $2,610 an ounce.

Although silver is sought after for jewellery, it also plays an important industrial role in the manufacture of electrical contacts and batteries.

Platinum is valued by jewellers, but like palladium is also used in the manufacture of catalytic converters.

Exchange traded funds that give investors exposure to these metals include WisdomTree Physical Silver, Aberdeen Standard Platinum Shares and iShares Physical Palladium. Respective annual charges are 0.49 per cent, 0.6 per cent and 0.26 per cent.

Mining stocks such as Rio Tinto, Barrick Gold and BHP Group are also worth looking at – especially given the attractive dividends they are paying investors. Rio Tinto recently announced a record dividend for 2021.

Mining stocks are not without risk because of the increasing scrutiny by investors of environmental, social and governance issues. Hollands says: ‘The cost of extracting gold and other precious metals can be huge.

When prices are rising, the economics of extraction work. When they fall, they don’t. Also, some mining companies do have a poor track record on looking after their employees.’

Hollands believes investors should look at investment funds that have some exposure to mining stocks – the likes of BlackRock Gold & General (annual charges of 1.17 per cent) and JPM Natural Resources (0.9 per cent).

How to buy and store your bullion bars, carats or coins

If you would like to physically own gold, the best way is by buying online or via phone through a bullion trader. They will also be able to store it on your behalf.

The price an investor pays is dictated by the ‘spot price’ of a troy ounce of gold. This is the middle price at which gold is bought and sold. Gold is traditionally measured in dollars as this is the most dominant currency in the world – but bullion traders still calculate prices in British pounds sterling for UK investors.

A troy ounce is slightly heavier than a normal ounce – 31.1 grams as opposed to 28.35 grams. Adrian Ash, of Bullion Vault, says: ‘Investment gold is traded in bars. Most people think of the large gold bricks in a James Bond movie such as Goldfinger, but you can invest in fractions of one.’ 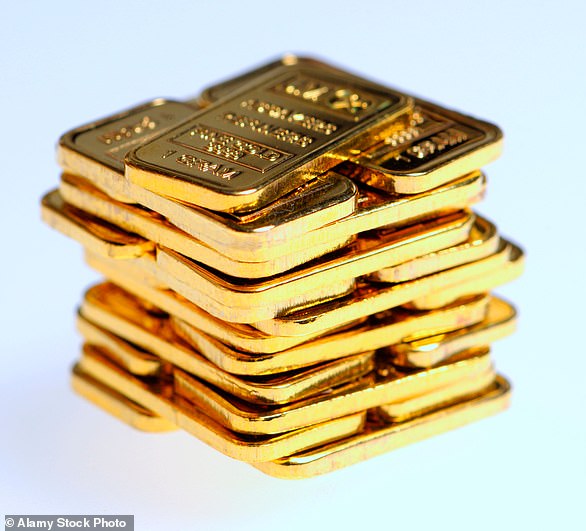 All that glistens: If you would like to physically own gold, the best way is by buying online or via phone through a bullion trader

Unfortunately, the commission that bullion traders take on sales is rarely openly advertised – so you must work it out yourself. Websites such as Royal Mint give the latest gold spot price. You can then look at the price bullion dealers are prepared to sell at – the difference in effect represents their charges.

Dealers such as Baird & Co, Chards, Pure Gold Company and Royal Mint take a cut equivalent to between 2 and 5 per cent of the spot price. For example, Chards was selling one ounce gold bars at £1,473 on a spot price of £1,423 at one point last week – so adding a 3.5 per cent charge.

Another consideration is the storage cost. Although you might like to keep gold at home, it is far more secure if held under lock and key in a secure vault. Ash says: ‘Holding your gold in a fully insured storage facility makes it easier for trading – you can buy and sell without touching the gold.’

BullionVault charges a minimum of £36 a year – or 0.12 per cent of the value of the gold stored. Baird & Co charges 0.35 per cent while Chards and Royal Mint both charge 0.5 per cent. The Pure Gold Company uses a third party storage company called Loomis that charges 0.65 per cent.

Gold purity is measured in carats. Investment quality gold bars are 24-carat and consist of at least 99.9 per cent gold. But this purity means it is soft and malleable. Investors might consider investing in gold coins such as the Sovereign, which is 22-carat but easier for day-to-day handling. Another major coin is the 24-carat Britannia.

You do not have to pay VAT on investment gold, such as bullion bars and coins. The Sovereign and Britannia coins are also deemed to be legal tender – nominally worth £1 and £100 – so are exempt from capital gains tax. The biggest value of these coins is the gold in them. Investors should be wary of paying over the odds for a ‘special edition’ gold coin. Just because you have an aesthetically desirable collectable coin does not make the piece a valuable investment.