'It is the law!' Huge row erupts after Truss rocked by move on hated Brexit deal

Edwin Poots, DUP Stormont agricultural minister, ordered officials to halt the checks from midnight tonight after seeking legal advice. Mr Poots and the DUP have repeatedly threatened to withdraw ministers from the Stormont Executive if major changes to the Northern Ireland Protocol are not secured.

Now, Sinn Fein has insisted the Northern Ireland Protocol is the law and it “must be adhered to”.

She tweeted: “The stunt is an attempt by the DUP to unlawfully interfere with domestic and international law.” 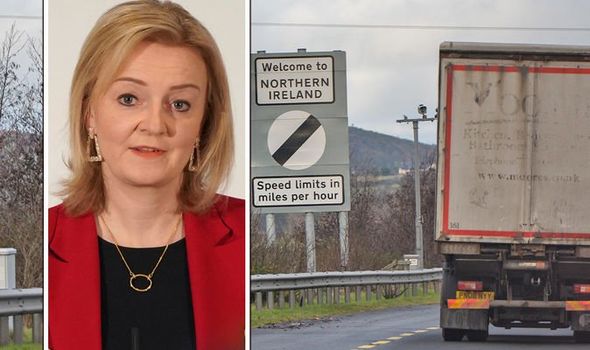 Her party colleague, John O’Dowd, said Mr Poots was “perfectly aware” of the Executive position over the protocol.

He said: “The protocol is the law.

“The DUP signed off at the Executive that they would adhere to the regulations within the protocol.

“I have a number of questions which require to be answered by Mr Poots.

“Where did he get this legal advice?

“Did he go to the Attorney General? Did he use Government legal advisers?

“The facts remain the same.

“The Executive has a position that they will adhere to the protocol, to the European Withdrawal Agreement, and the principle remains for all Executive ministers, you have to adhere to the law.”

Mr O’Dowd went on to say he had no doubt civil servants would be “taking advice” over Mr Poot’s decision to halt Protocol checks.

He added: “We will do everything within our power to ensure that the Executive operates properly.

“The civil servants, I have no doubt, are already taking advice on these matters.

Alliance Party MLA John Blair also lashed out at Mr Poots and said the DUP were “addicted to disruption”.

Mr Blair said: “There is a legal obligation upon the minister to provide checks at ports, this has been made perfectly clear to him by his own officials and through previous advice from Defra.

“Here we are again at a time of uncertainty and the minister is behaving like a wrecking ball, bringing more uncertainty to our sectors and creating disruption the best he can.

“It is completely unacceptable and unsuitable at this time.

“This is a time for working with others to find solutions.”

Naomi Long, leader of the Alliance Party, tweeted people were tired of “grandstanding and instability” over the Protocol.

She urged Mr Poots to “step up and do the job or step aside”.

Mr Allister said: “Though we have had a year of allowing the protocol to bed in, it is welcome that he (Mr Poots) has come to the conclusion he has.

“Now the challenge is to bind together to make sure that the ill-gotten sovereignty of the EU over Northern Ireland is removed in its entirety.

“There is no place for Northern Ireland to be left subject to foreign laws, foreign institutions, foreign courts, foreign customs. It all has to go.

“The start that has been made tonight can only be the start.

“We need now to see the total dismantling and the unbedding of the protocol.”

Share
Facebook
Twitter
Pinterest
WhatsApp
Previous articleKyle Sandilands doubles down on his walk out and insists 'I have every right to decide the news'
Next articleMel B's daughter Phoenix, 22, relives harrowing moment she saw her mother endure domestic abuse
RELATED ARTICLES
News