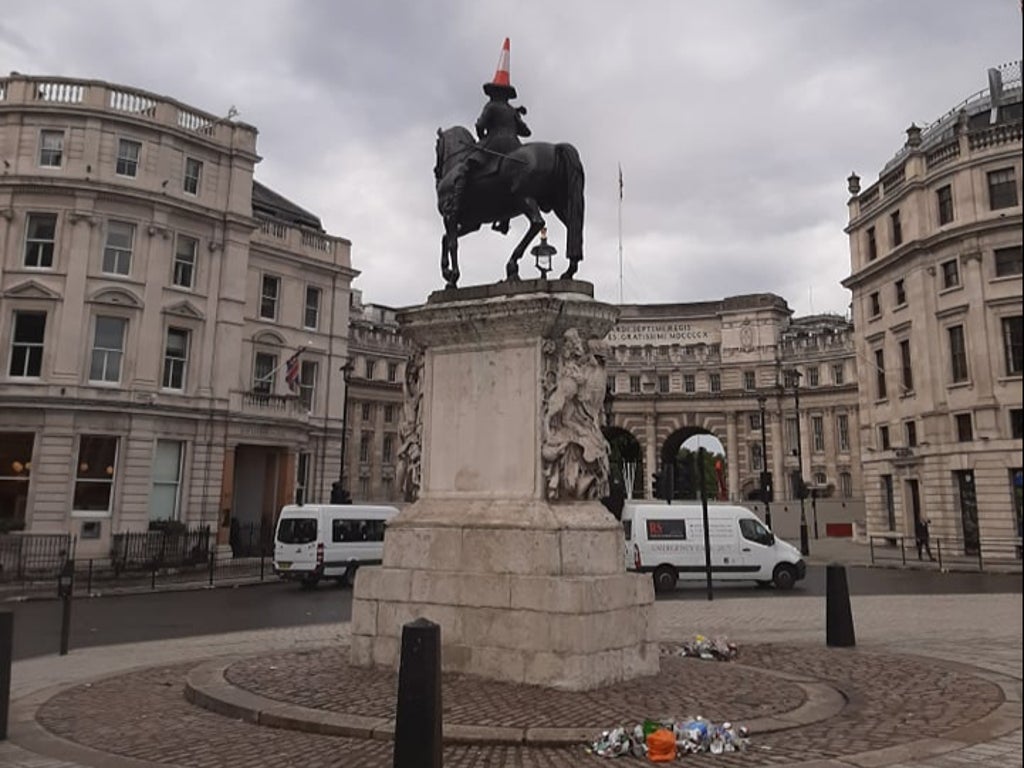 A man staggers outside a theatre near Leicester Square on Monday morning.

It looks – just like football – that he hasn’t come home just yet.

Even though there were no victory celebrations from England fans, beer bottles and cans line the streets of central London the morning after the night before.

A huge clean-up is underway to remove rubbish left by crowds who had gathered to watch the Euro 2020 final, which saw England lose out to Italy on penalties.

“It was a complete mess,” Ola Olawale says about Leicester Square, as he tries to reach beer bottles somehow on top of the restaurant where he works with a long stick.

“It was really, really disgusting.”

He says he thinks fans were trying to get on top of the restaurant, which was how the empty bottles ended up there.

Around him, workers clear up rubbish still left in the square, where footage from Sunday evening has shown fans throwing bottles and the ground covered in litter.

Olawale says workers had done a “wonderful” job of getting the square to the stage it was shortly before 8am.

In nearby Chinatown, plastic bottles, beer cans and food line the sides of the streets and bin bags sit in the middle of pavements.

And a short walk away in Trafalgar Square, where crowds had also gathered for the final, work is also underway to clean up the area.

A cone sits on the head of a statue of George IV on horseback, with pockets of litter at its foot.

Omer Siraj, who works in a nearby Pret, tells The Independent fans also put a cone on its head and draped it in an England flag after England’s semi-final win against Denmark.

He says the mess in the area was “terrible” on Monday morning. By 8am, it is largely clean, except for the odd clumps of rubbish on the pavement and the grass outside of the National Gallery.

Huge crowds of people had been party mode across London throughout Sunday, proudly sporting England’s team colours and draped in England flags.

Some boisterous supporters even climbed on top of a bus outside Wembley, while others outside King’s Cross station in the capital let off red and white smoke during the build-up.

The Metropolitan Police said they made 49 arrests throughout Sunday for a “variety of offences” and 19 officers were injured “while they confronted volatile crowds, the force said.

Oleksandr Usyk loves London but dreams of a rematch in Kiev