Jennifer Lopez and Ben Affleck looked to be in great spirits as they stepped out together in Los Angeles on Monday.

The happy rekindled couple smiled as they strolled together and Jen wrapped her arm in Ben’s while in a parking lot after an iced coffee run.

The veteran entertainer looked ready for spring as she wore a lavender sweater with a floral embroidery throughout. The top had darker shades of purple on the sleeves and cuffs, and also featured some green on the front. 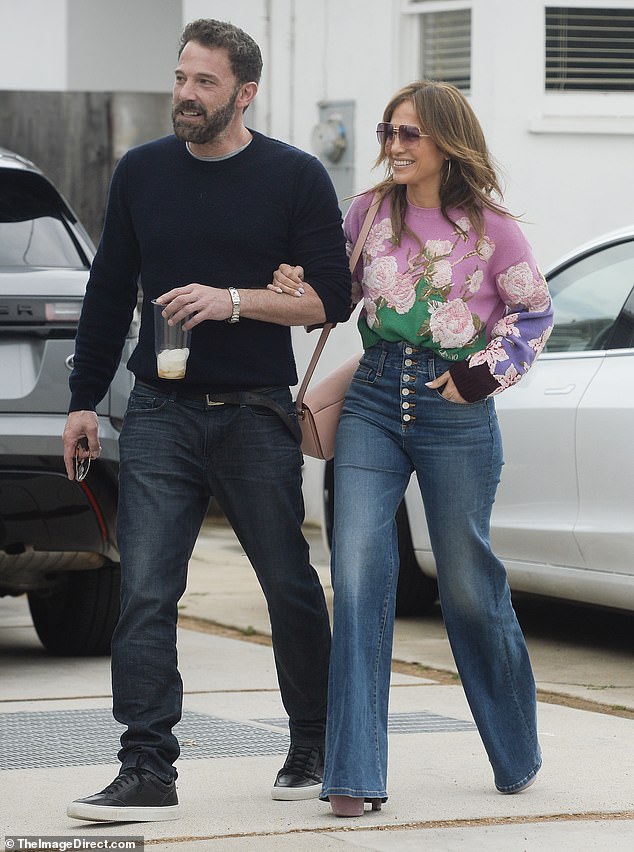 Out and about: Jennifer Lopez and Ben Affleck stepped out together in Los Angeles on Monday

The mother-of-two tucked the top into statement-making flared jeans with a button fly that were faded at the knees.

She wore her honey-highlighted locks in a center part with a subtle 70s style flip at the ends as they fell over her shoulders.

The New York native draped a blush pink leather purse over her shoulder as she tucked one hand into her pocket. 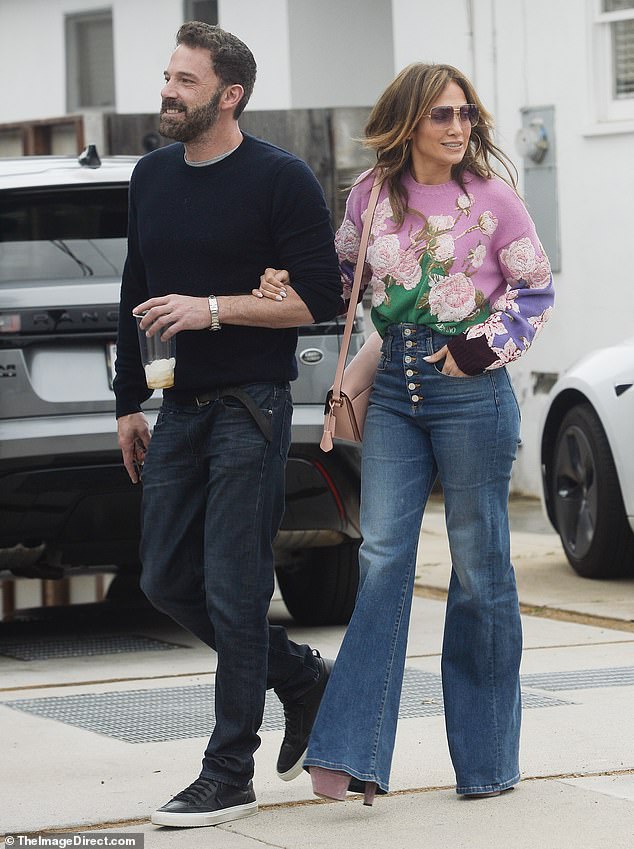 Loved-up: The happy rekindled couple smiled as they strolled together and Jen wrapped her arm in Ben’s

She rounded out the fun ensemble with a pair of towering lavender platform heels that just barely showed under her denim.

The superstar’s face was lightly made up with softly bronzed cheeks and her signature nude and glossy lip. 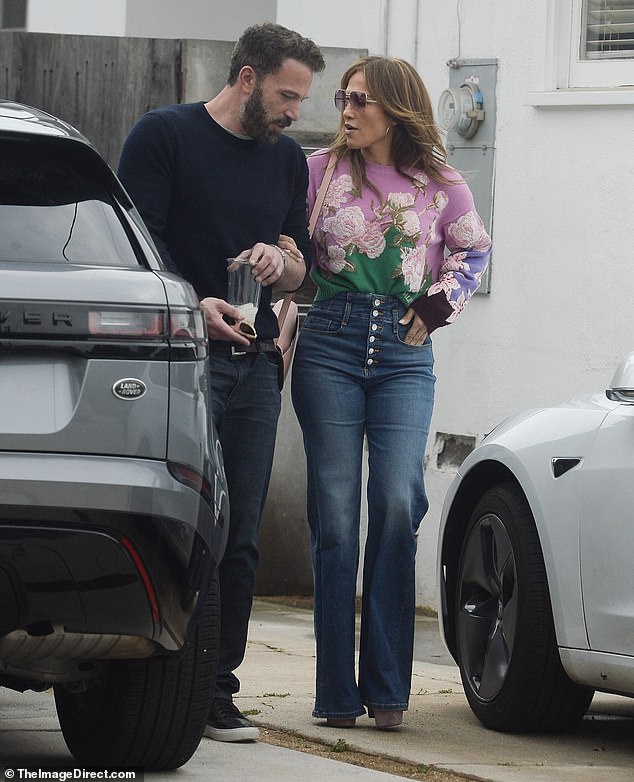 Style choice: The veteran entertainer wore a lavender sweater with a floral pattern throughout

Ben let his lady take the fashion reins as he went for a much more understated look.

The filmmaker sported a navy sweater and rolled the sleeves up to his elbows. The top of a grey crewneck was visible underneath.

For his bottom half he opted for a pair of dark denim and secured the trousers with a belt.

He finished the casual getup with a pair of black leather sneakers that had white soles.

The Tender Bar star had a scruffy beard that matched his slightly greying hair. He carried a clear plastic cup of ice in his hand. 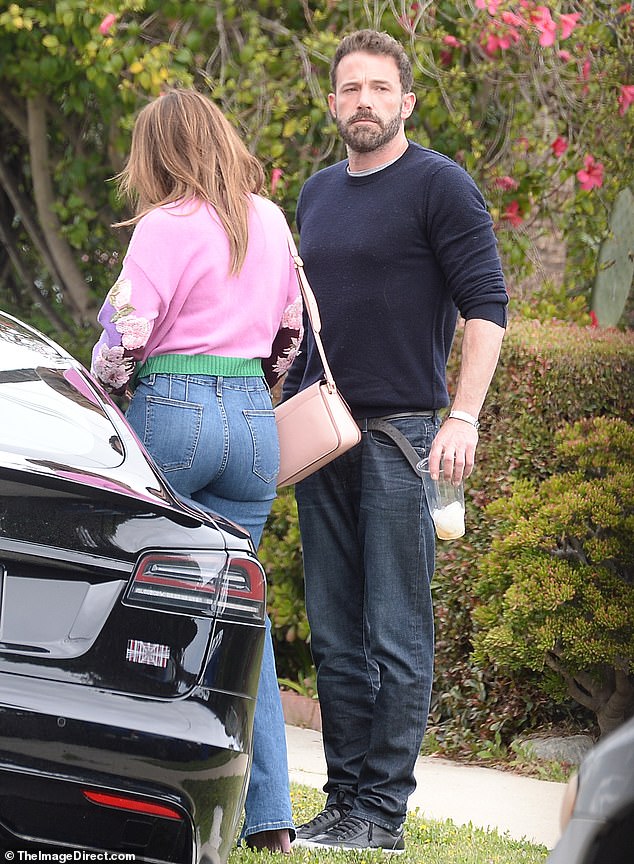 Taking the backseat: Ben let his lady take the fashion reins as he went for a much more understated look

On Monday Deadline reported that Lopez has just inked a new deal with Amazon to develop an upcoming series.

It will be called Backwards In Heels and is about a female-only NYC hotel catering to professional women after World War II.

Lopez will produce the show with Elaine Goldsmith-Thomas and Benny Medina via their Nuyorican Productions, with Julie Goldstein joining as well. 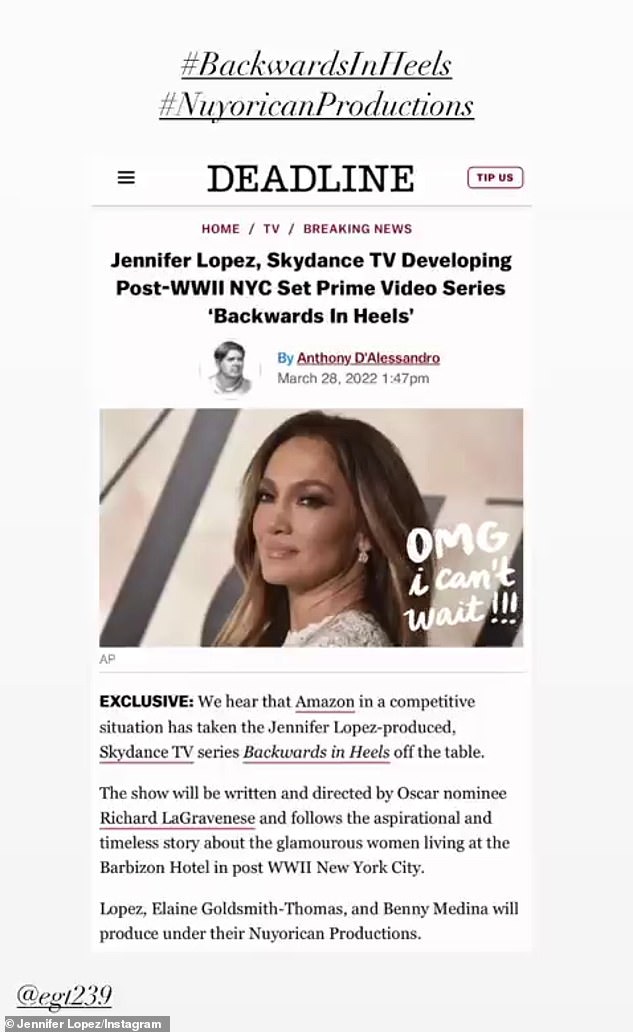 Professional news! Jennifer has signed on to develop a new series called Backwards in Heels