Jessica Simpson thanked Kim Kardashian for taking her daughter Maxwell to ‘Camp North’ as she posted snaps showing all the fun her girl had celebrating her best friend’s ninth birthday in Wyoming.

The post included video of Maxwell, 10, shooting a bow and arrow and bravely going on a zipline as Kim cheered her on.

‘Alright, let’s go Maxwell!’ Kim, 41, said as the youngster prepared to leap off the deck. 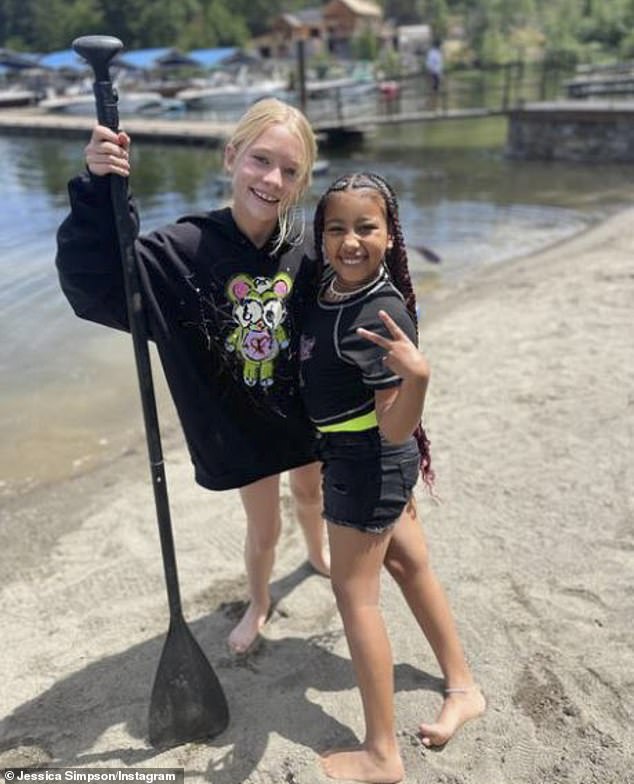 ‘I’m comin’ next time!’ Jessica Simpson thanked Kim Kardashian for taking her daughter Maxwell to ‘Camp North’ as she posted snaps showing all the fun her little girl had celebrating her best friend’s ninth birthday in Wyoming

Kim appeared to be the one behind the camera and captured Maxwell bravely gliding down the zipline and through the trees.

Maxwell also showed her archery skills as she shot a bow and arrow, impressing everyone.

‘That’s what it’s supposed to look like, there you go!’ Someone said.

The girls all posed together with their bows and arrows in the woods in one of the shots. 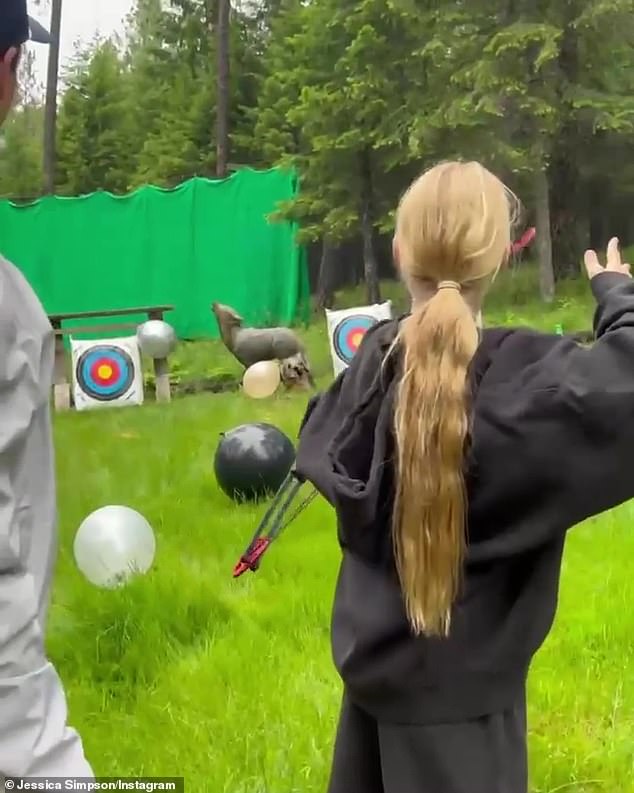 Whoa! Maxwell also showed her archery skills as she shot a bow and arrow, impressing everyone 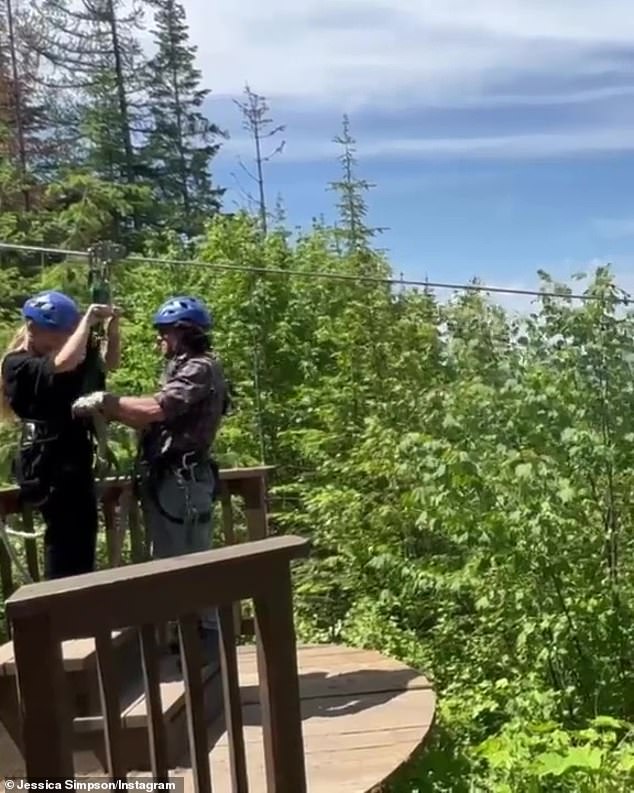 ‘Let’s go Maxwell!’ Kim cheered Maxwell on as she prepared to go ziplining

The post also included a photo of Maxwell posing with her bestie North as they stood on the beach.

‘CAMP NORTH was magic! Thank you @kimkardashian for giving Maxwell the time of her life and takin’ care of my little lady on her first “camp sleep away” trip! I’m comin’ next time!’ Jessica captioned the post. 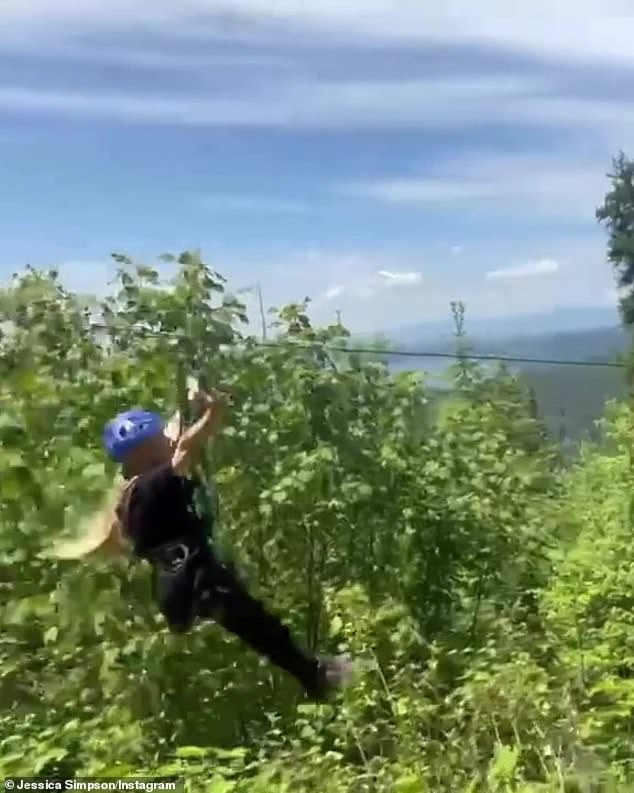 Yay! The 10-year-old soared through the skies 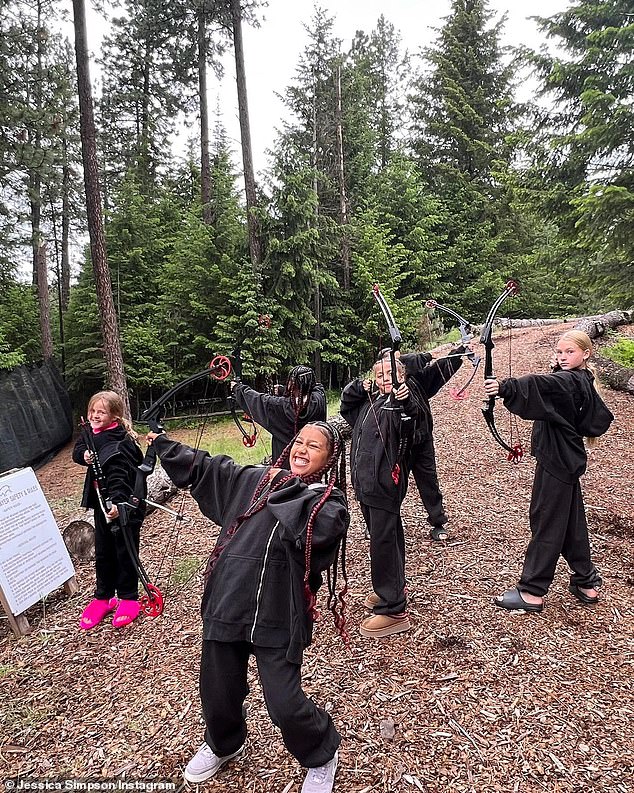 Bullseye! The girls all posed together with their bows and arrows in the woods in one of the shots

Kim spared no expense for her daughter North’s ninth birthday party this month, that saw the young one and her pals whisked off by her mother’s private jet to Wyoming for a glamping soirée.

On Tuesday, the 41-year-old Kardashians star shared pictures from the grand event that had fans in awe over the extravagance on display, with one writing: ‘Perks of being a billionaire’s daughter…. I wish this on everyone.’

‘These kids are livin’ the life,’ one person added, while another noted the personalized private jet writing: ‘Kim air is the biggest flex I literally can’t.’

‘GLAMPING at its finest,’ another pointed out in the comments section, with another joking: ‘If my kids can’t flex like this I ain’t having none.’ 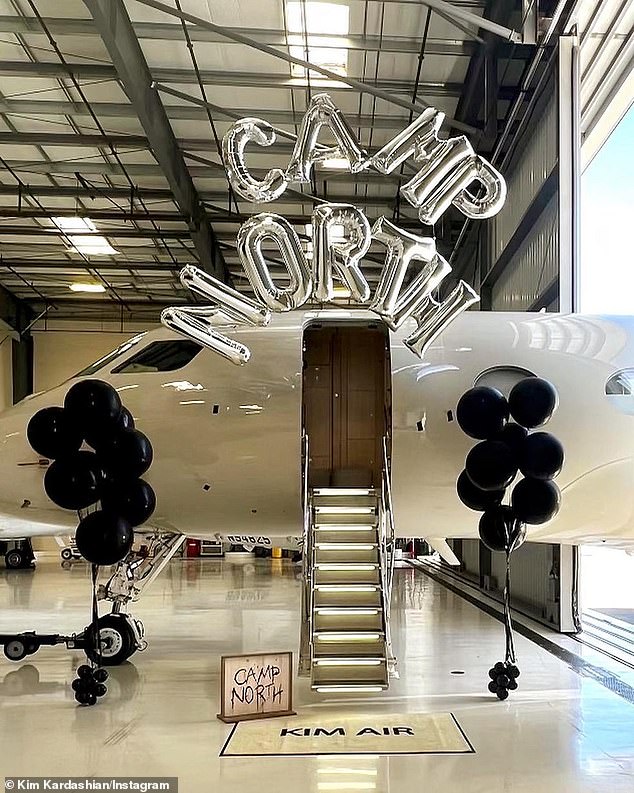 ‘Perks of being a billionaire’s daughter’: Kim revealed North and her pals including Jessica Simpson’s daughter took PRIVATE JET to Wyoming for ‘glamping’ 9th birthday party

Tracy Romulus – Kim’s chief marketing officer at KKW Brand – also had her 10-year-old daughter Ryan along for the ride at the bash.

Also in the gang was Selena Gomez’s nine-year-old half sister Gracie Elliot Teefey.

Kanye West, who shares North with Kim, was not pictured in the birthday post, though he is known to have a ranch in Wyoming, where at one point they were rumored to be moving as a family before the couple divorced.

Kim first showed off her new ‘Air Kim’ private plane earlier this year, and it is rumored to have cost upwards of $150million. 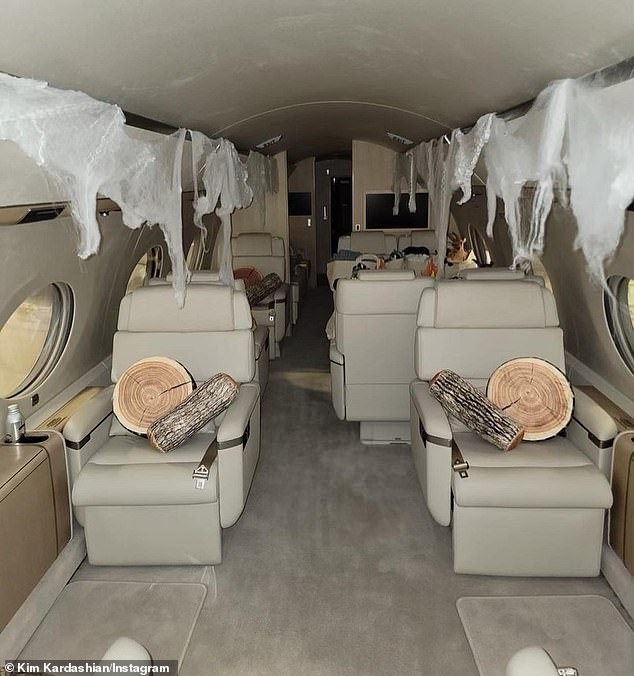 Fun for the kids: Once inside the vessel, the luxurious interior had been decorated with spooky Halloween-style cobwebs with fake pieces of wood on every seat to fit with the camping theme 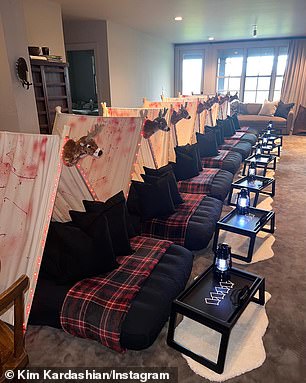 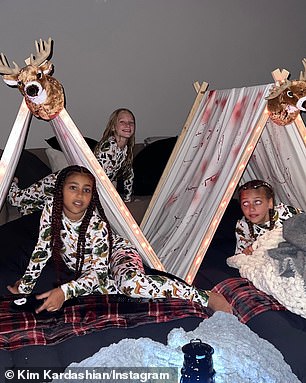 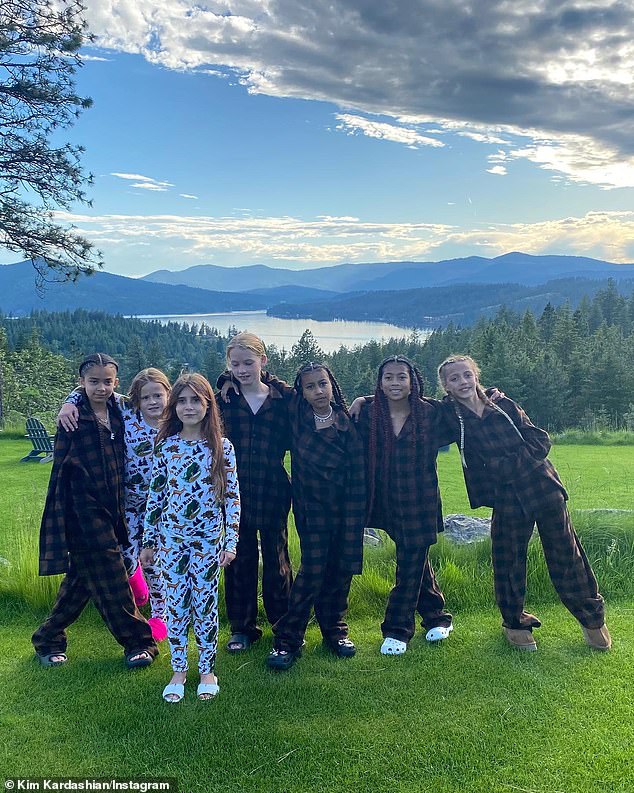 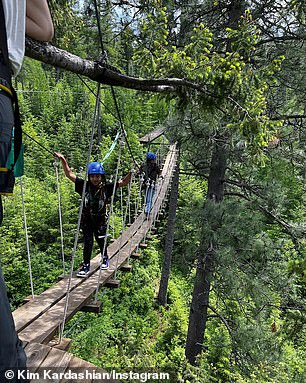 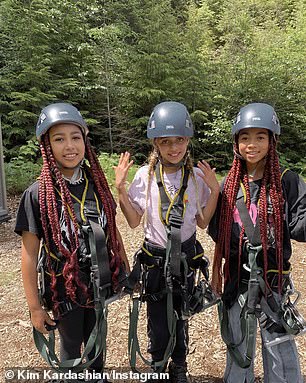 Tiring them out: The fun-packed birthday party also including outdoor activities such as zip-lining and water tubing 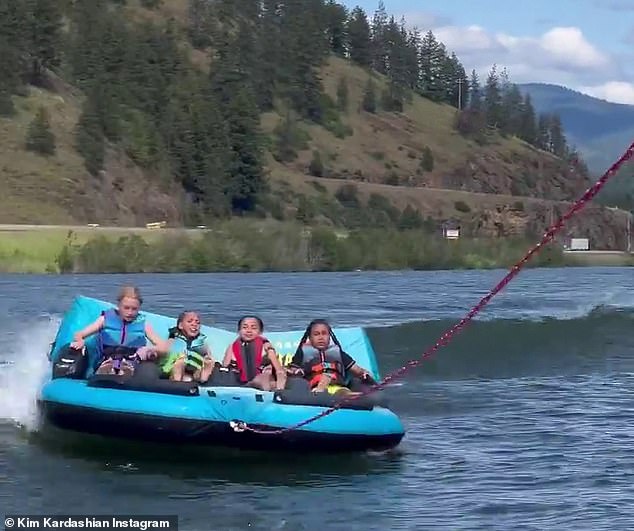 Epic: North and her pals also enjoyed a tubing ride along the water in Wyoming

From the first picture taken inside an aircraft hangar, fans could see the amount of work that had gone into the preparations, as Kim’s private jet – with its own branded ‘Kim Air’ doormat – was decorated with silver helium balloons spelling out ‘Camp North.’

Once inside the vessel, the luxurious interior had been decorated with spooky Halloween-style cobwebs with fake pieces of wood on every seat to fit with a horror-tinged camping theme. 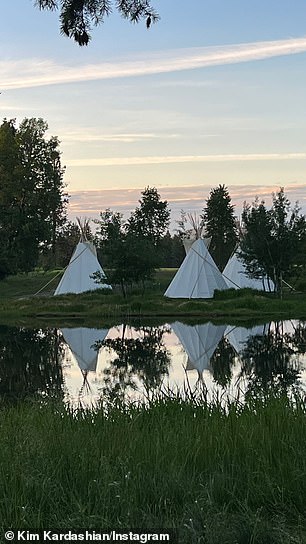 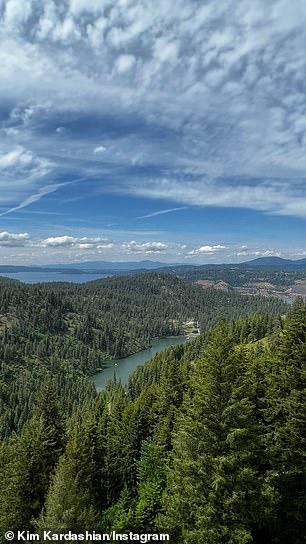 Idyllic: Kim also shared more snaps to her Instagram Stories that showed teepees outside as well as incredible views 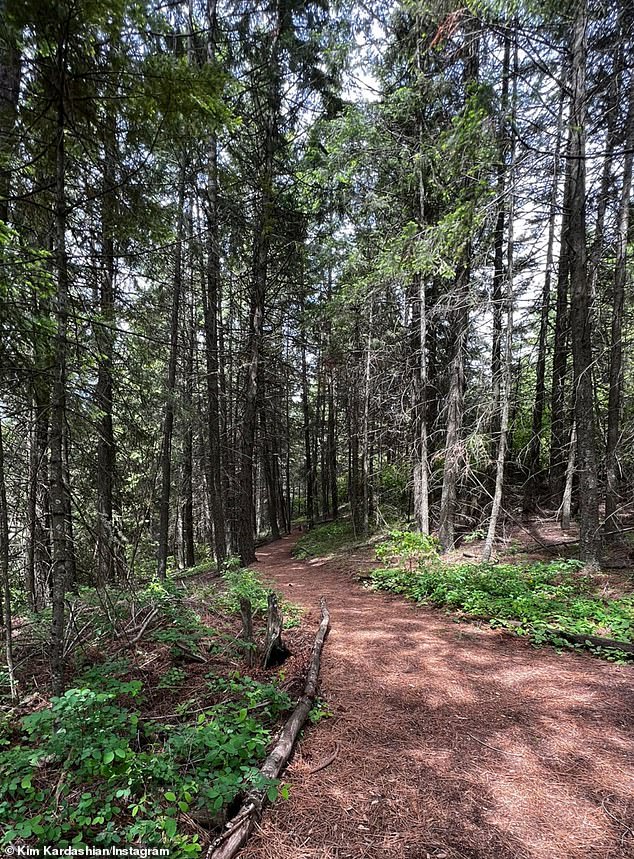 Nature walks: Kim posted another snap of a nature trail while enjoying her daughter’s birthday 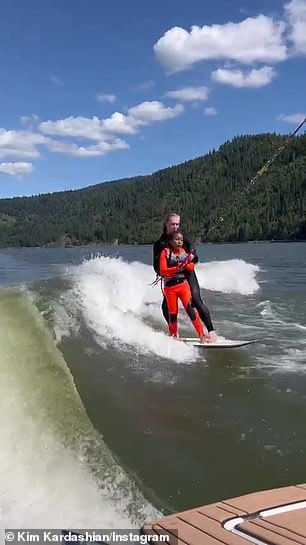 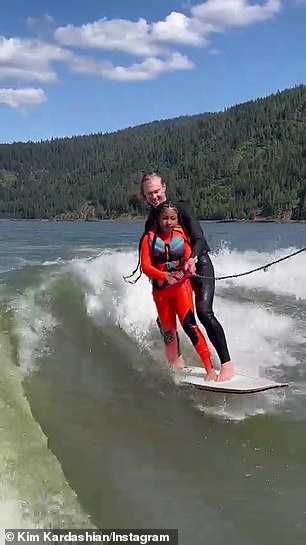 Birthday girl: North showed off her wake-surfing skills accompanied by an adult

Each tent had a blood-stained toy-stuffed deer head hanging at the top, which some fans found distressing, with one writing in the comments: ‘Are those blood stained tents?’ while another joked: ‘did they really have to do the stuffed deer like that???’

As well as the kids, Kim impressed her friends back home with the expedition, as her PR pal Simon Huck wrote, ‘Sign me up,’ while Rob Kardashian’s ex Adrienne Bailon wrote ‘SO DOPE’ three times.

Kim officially became a billionaire in April last year when Forbes estimated her mega-wealth by assessing her cosmetics company, KKW Beauty, and her shapewear brand, Skims, which have both proven to be extremely lucrative. 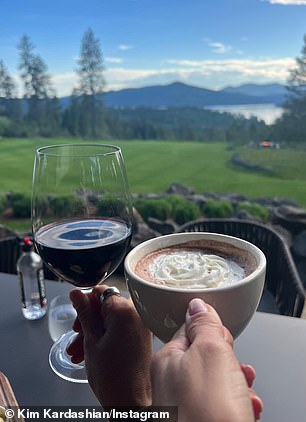 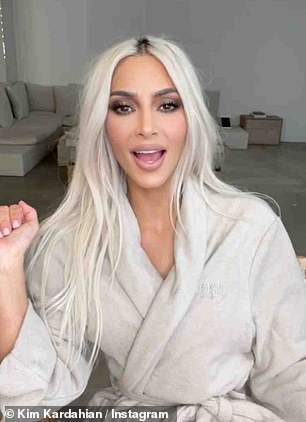 Mom time! Kim’s post also included a shot of a glass of red wine and a hot chocolate showing there was at least some time for the adults to kick back and relax as well