The 34-year-old country music singer and influencer looked incredibly toned with muscular legs and arms as well as a flat belly when she posed away in the tiny pink bikini.

This comes after Decker said she has been feeling depressed over her body image issues that have cause her to become anxious. 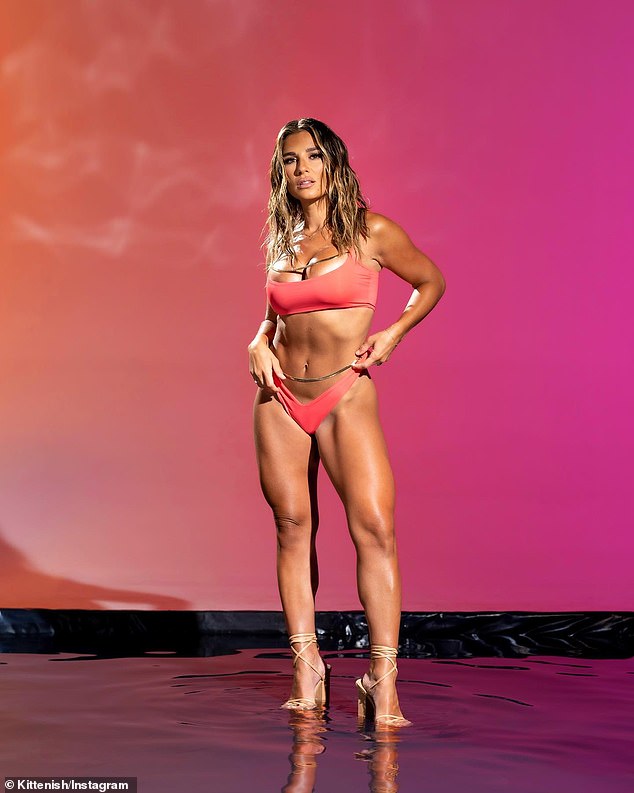 In the new image she was modeling a Kittenish bikini which she designed.

The suit was very small allowing for plenty of skin to show. Jessie, who has been on vacation in Italy, had a deep tan as she was glammed up.

The star added beige strappy heels and gold jewelry as she wore her hair down.

The photo shoot took place inside a studio with optimal lighting. 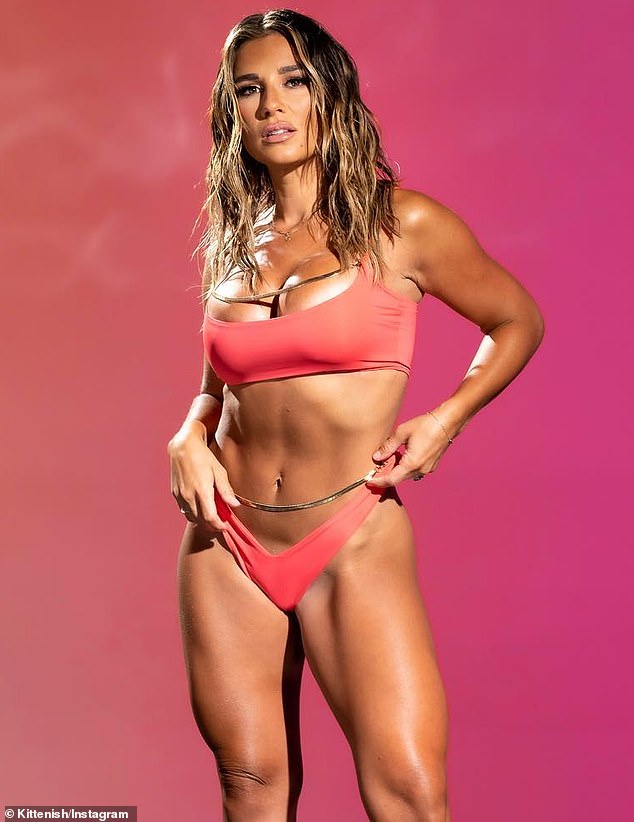 A closer look: The 34-year-old country music singer and influencer looked incredibly toned with muscular legs and arms as well as a flat belly when she posed away in the tiny pink bikini

In a lengthy piece of writing the mother-of-three revealed she’s been suffering from mental health struggles.

She said she ‘wanted to be open and honest’ as she admitted, ‘My anxiety has gotten worse. My self-esteem, my confidence.’

‘There have been really beautiful, amazing moments but also some pretty low lows,’ she wrote in her message.

Explaining her reasoning behind the post she said, ‘I was trying to hide my vulnerabilities because if I made everything look great all the time it would hide my internal struggles.’

The former reality TV star added: ‘I have also always felt a duty to make people smile and happy or laugh and always be that bubbly girl.’ 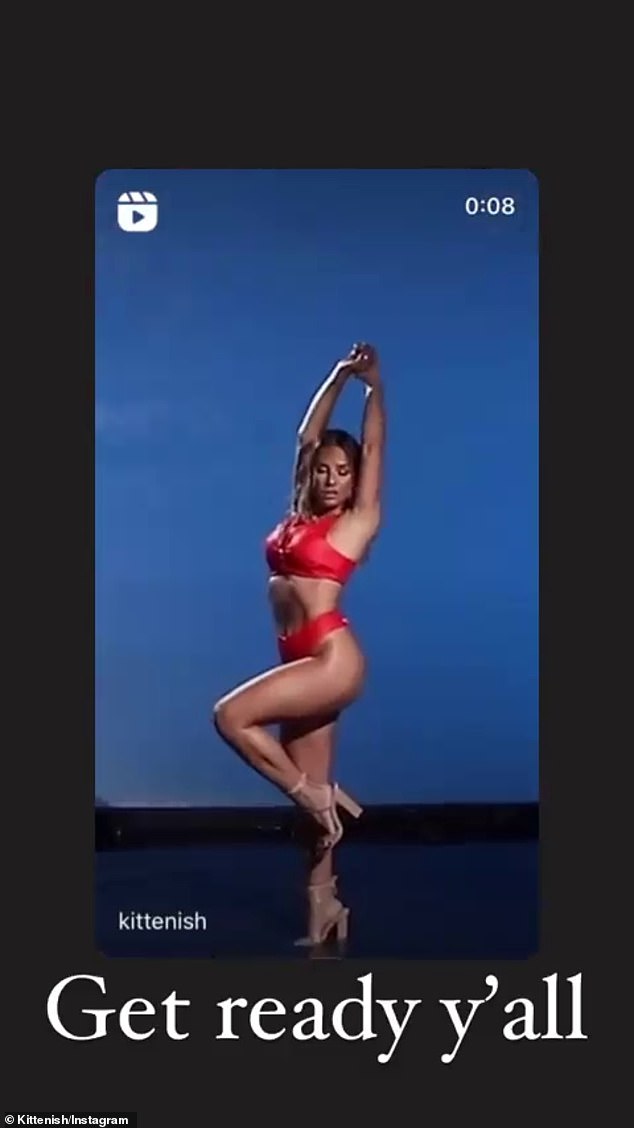 Another one: The songbird was also seen in this red two piece with nude heels 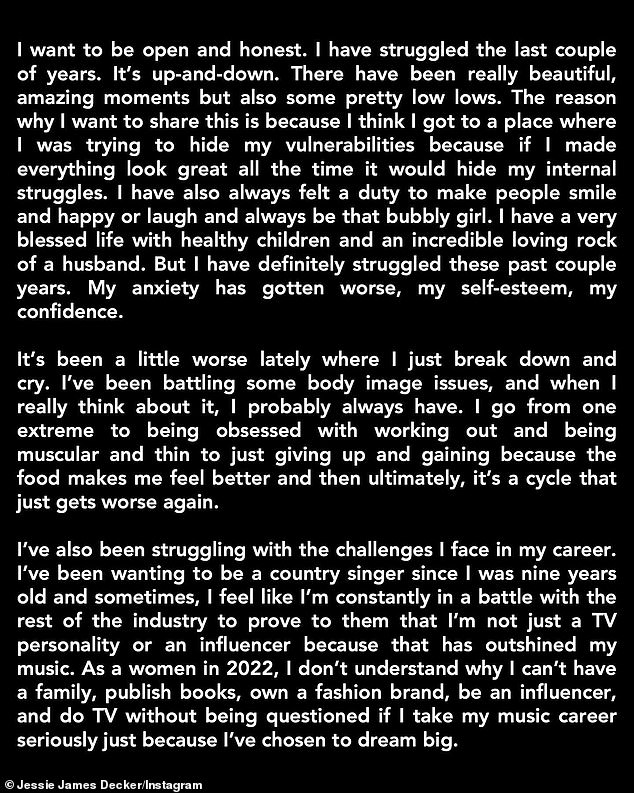 Vulnerable: In a lengthy piece of writing the mother-of-three revealed she’s been suffering from mental health struggles 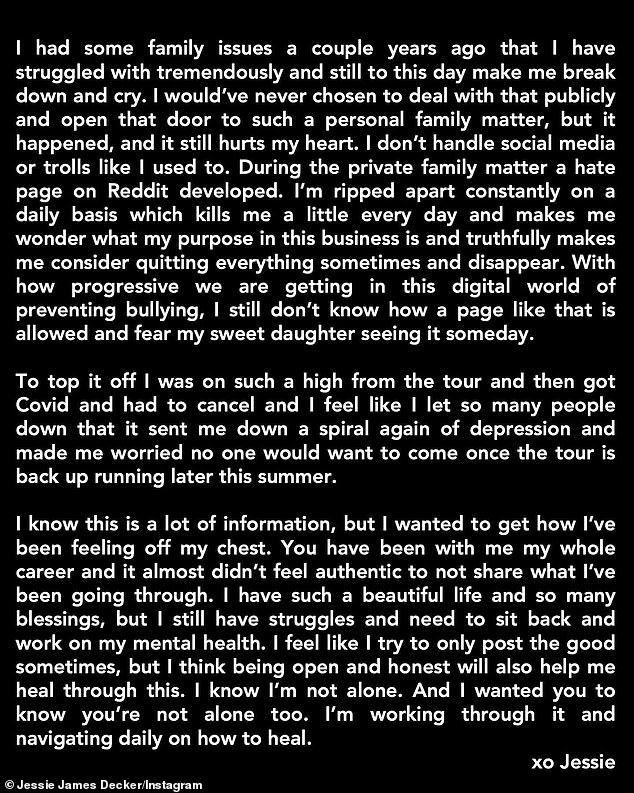 Candid: She said she ‘wanted to be open and honest’ as she admitted, ‘My anxiety has gotten worse. My self-esteem, my confidence’

Jessie, who has built an empire with a clothing and cosmetics company called Kittenish, also acknowledged the positives in her life.

‘I have a very blessed life with healthy children and an incredible loving rock of a husband. But I have definitely struggled these past couple years,’ she went on.

‘It’s been a little worse lately where I just break down and cry,’ she unveiled.

‘I’ve been battling some body image issues, and when I really think about it, I probably always have,’ she noted. Last July Decker also took to social media with a tearful video about being body-shamed by trolls.

In Thursday’s post she explained: ‘I go from one extreme to being obsessed with working out and being muscular and thin to just giving up and gaining because the food makes me feel better and then ultimately, it’s a cycle that just gets worse again.’ 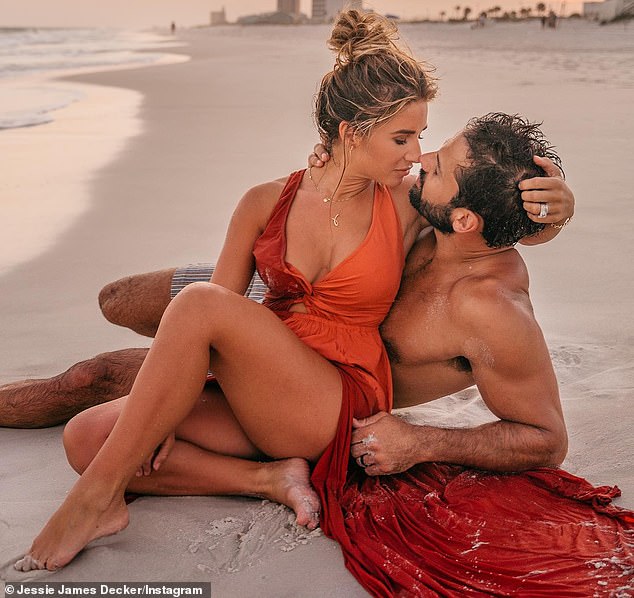 Pointing to her music career, the Tennessean vented, ‘I’ve also been struggling with the challenges I face in my career.

‘I’ve been wanting to be a country singer since I was nine years old and sometimes, I feel like I’m constantly in a battle with the rest of the industry to prove to them that I’m not just a TV personality or an influencer because that has outshined my music.’

She aired her frustrations as she said, ‘As a [woman] in 2022, I don’t understand why I can’t have a family, publish books, own a fashion brand, be an influencer, and do TV without being questioned if I take my music career seriously just because I’ve chosen to dream big.’

In another part of the upload Jessie opened up about the emotional roller coaster she felt after having to cancel her tour due to sickness.

‘I was on such a high from the tour and then got Covid and had to cancel and I feel like I let so many people down that it sent me down a spiral again of depression and made me worried no one would want to come once the tour is back up and running later this summer,’ she professed. 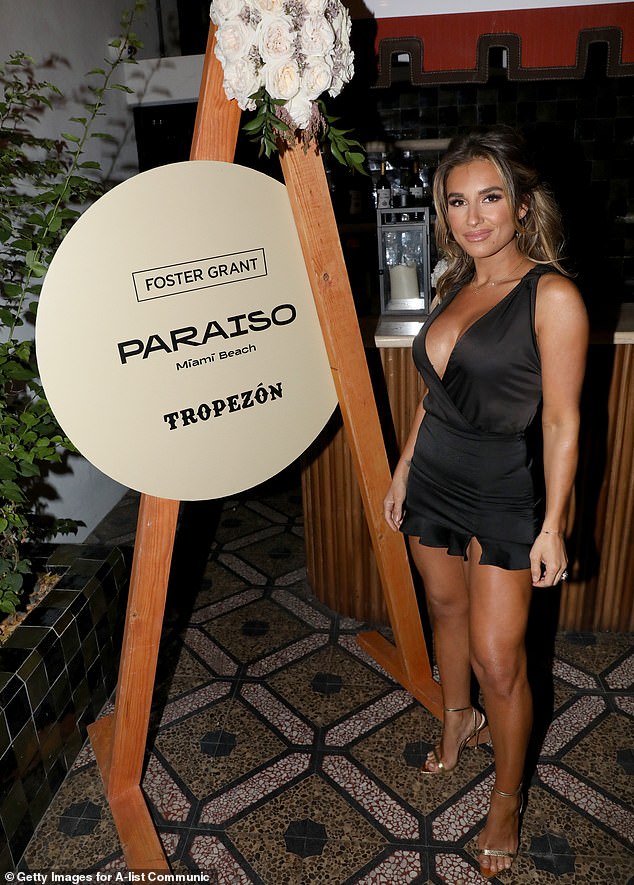 She does it all! The country music star expressed frustration with not being taken seriously as a singer: ‘I feel like I’m constantly in a battle with the rest of the industry to prove to them that I’m not just a TV personality’; seen on Thursday in Miami

Turning the heartfelt note to her family problems, the fashion designer hinted at her public rift with brother John James, without naming him directly.

‘I had some family issues a couple years ago that I have struggled with tremendously and still to this day make me break down and cry,’ she wrote.

‘I would’ve never chosen to deal with that publicly and open that door to such a personal family matter, but it happened and it still hurts my heart,’ she said candidly.

‘I don’t handle social media or trolls like I used to. During the private family matter a hate page on Reddit developed.

‘I’m ripped apart constantly on a daily basis which kills me a little every day and makes me wonder what my purpose in this business is and truthfully makes me consider quitting everything sometimes and disappear,’ the mogul penned.

‘With how progressive we are getting in this digital world of preventing bullying,’ she added, ‘I still don’t know how a page like that is allowed and fear my sweet daughter seeing it someday.’ 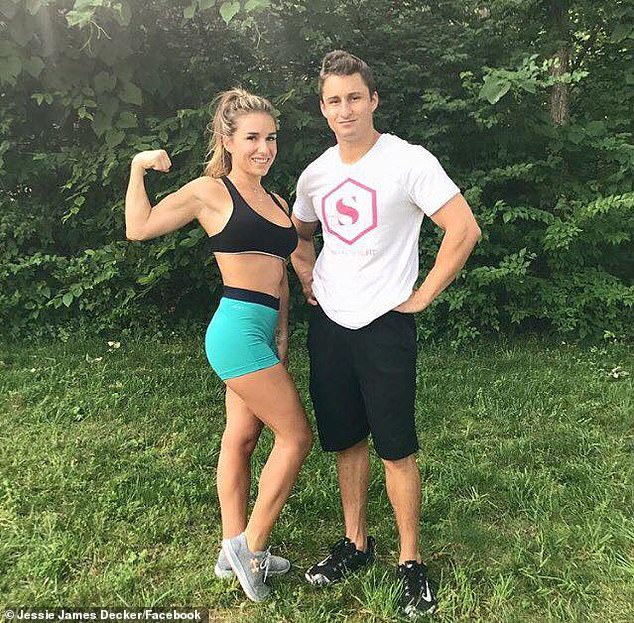 Family turmoil: Turning the heartfelt note to her family problems, the fashion designer hinted at her public rift with brother John James, without naming him directly

She wrapped up the extensive open letter by saying: ‘I know this is a lot of information, but I wanted to get how I’ve been feeling off my chest.’

Getting even more sentimental she reflected, ‘You have been with me my whole career and it almost didn’t feel authentic to not share what l’ve been going through.

‘I have such a beautiful life and so many blessings, but I still have struggles and need to sit back and work on my mental health. I feel like I try to only post the good sometimes, but I think being open and honest will also help me heal through this.

‘I know I’m not alone. And I wanted you to know you’re not alone too. I’m working through it and navigating daily on how to heal.’

She talked up her new Kittenish products, wearing a soft green tank top with her blonde-highlighted hair pulled into a cute and messy ponytail. 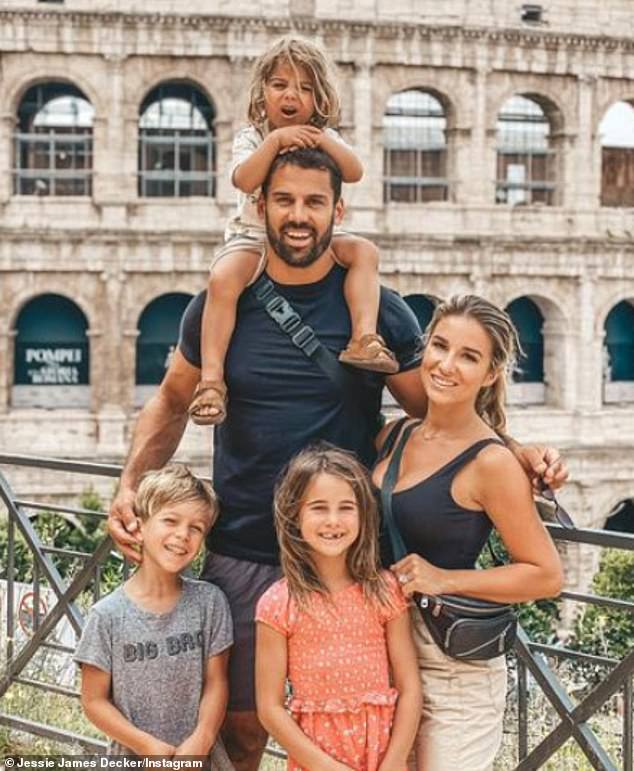 Family of five: The couple wed in 2013 and share three children: daughter Vivianne, eight, and sons Eric Jr. and Forrest, six and four

Decker teased the brand’s Bare It All lip kit, puckering her lips for the camera and holding up a tube of lipstick.

She later shared a photo with one of her sons as they relaxed together on a plush brown chair with a matching pillow.

Jessie and Eric recently celebrated nine years of marriage with a romantic trip to Italy.

The couple wed in 2013 and share three children: daughter Vivianne, eight, and sons Eric Jr. and Forrest, six and four.

On Father’s Day the star took to Instagram to gush about her love as she said: ‘Our babies are so lucky to have you. Watching you with our Wolfpack makes me fall more in love with you everyday. I Love you. I’m down to make more.’ 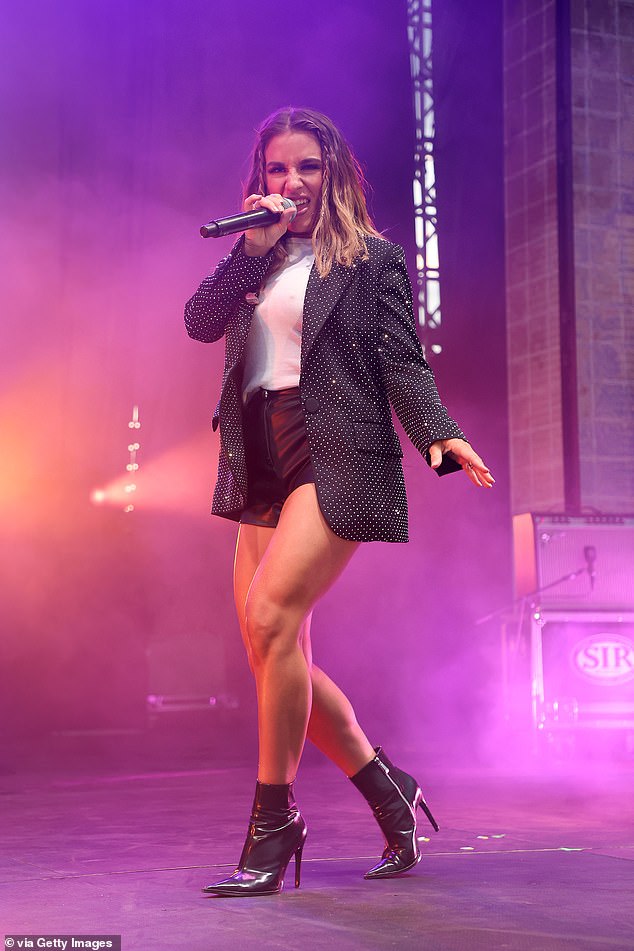 On stage: Seen on July 2 on stage at the LIV Golf Invitational – Portland at Pumpkin Ridge Golf Club in North Plains, Oregon